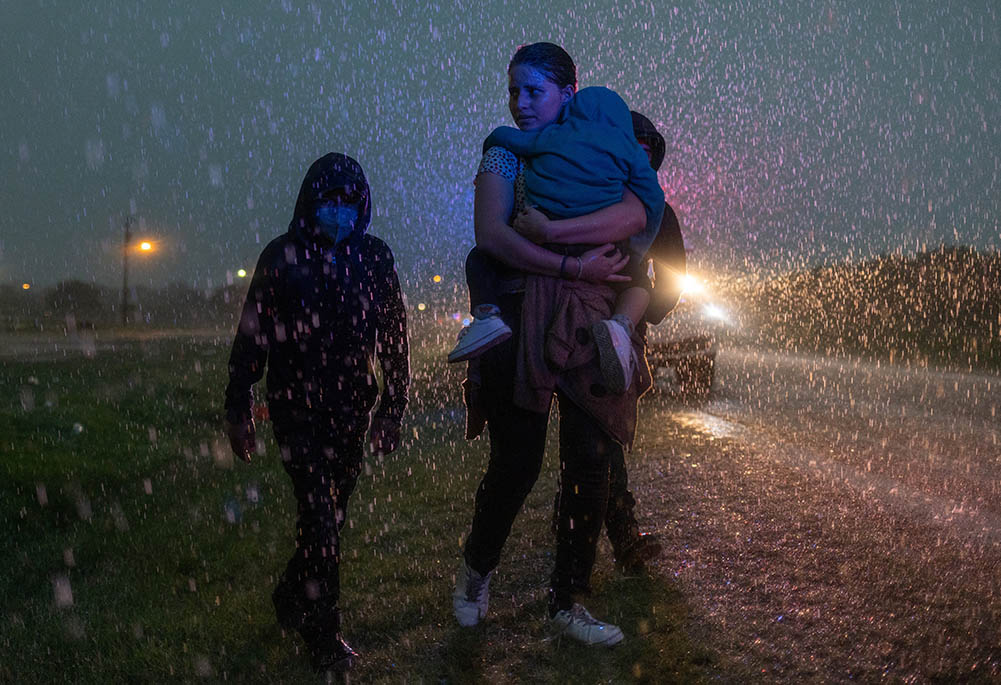 A mother from Central America and her three children are followed by a Texas Highway Patrol officer in La Joya, Texas, May 19, 2021, as they look for cover during a heavy rainfall after crossing the Rio Grande into the United States from Mexico. (CNS/Reuters/Adrees Latif)

Against a backdrop constructed of plastic bottles and life vests pulled from the Mediterranean Sea where thousands of migrants have drowned trying to get safely to Europe, Pope Francis met with 200 refugees who had successfully made it to the island nation of Malta.

"Those same people we see on crowded boats or adrift in the sea, on our televisions or in the newspapers, could be any one of us, or our sons or daughters," the pope said April 3, on the last day of his two-day trip there.

The day before, four survivors were rescued from international waters off Malta, after 90 other Libyan migrants from the same boat drowned. During the first three months of 2021, some 300 migrants have died or were presumed dead along the Central Mediterranean route, according to the International Organization for Migration. Another 3,100 were intercepted and returned to Libya, to conditions described as "hellish" by Amnesty International.

Repeatedly during the Malta trip Francis emphasized the need for hospitality toward the stranger, citing his own first papal trip, in 2013, to the Italian island of Lampedusa, where he blasted the "globalization of indifference" toward migrants and refugees.

His message has taken on new urgency, given the more than 4 million Ukrainians who have fled their country since the Russian invasion that began Feb. 24. Poland has accepted nearly 2.5 million Ukrainian refugees, with others fleeing to the European Union and other countries. Most are being housed in private homes, where they are welcomed with "warm and open hearts," as our colleague Chris Herlinger has reported. So far, refugee camps — often dangerous and unsanitary — have not been necessary.

The United States has agreed to accept 100,000 refugees from Ukraine — an embarrassingly low number — and already hundreds are arriving at our border, including the southern border, where they wait in camps to be processed. Of course, those numbers of Ukrainians — and the length of their wait — pales in comparison to that of migrants from South and Central America, some of whom have been stuck at the border for years.

Although the violence of a sudden, unjust and unprovoked war is different from the kinds of violence causing many peoples in the Americas to flee north, it's difficult not to conclude that the relative openness to Ukrainian refugees is, at least in part, due to their skin color. We were not so welcoming just last fall, when tens of thousands of Haitians were also escaping situations of desperate violence.

The announcement last week of the official end to Title 42, the Trump-era pandemic restrictions that effectively blocked migrants from entering the United States, is long-overdue news, given that the policy likely violated U.S. and international law. But it is just a first, small step — and sadly one that too many Americans and members of Congress oppose.

Instead, as Washington Auxiliary Bishop Mario Dorsonville, chair of the U.S. bishops' Committee on Migration, said, we should welcome the end to this harmful policy, which has led to the expulsion of more than 1 million migrants since 2020, forcibly returning many asylum-seeking children and families to places where their lives are in danger.

"We urge the Biden Administration to implement a comprehensive plan for the border that ensures the humane treatment of all persons and respects their God-given dignity, while safeguarding due process," the U.S. bishops' statement said. We agree.

A version of this story appeared in the April 15-28, 2022 print issue under the headline: Welcome the stranger from anywhere, everywhere.