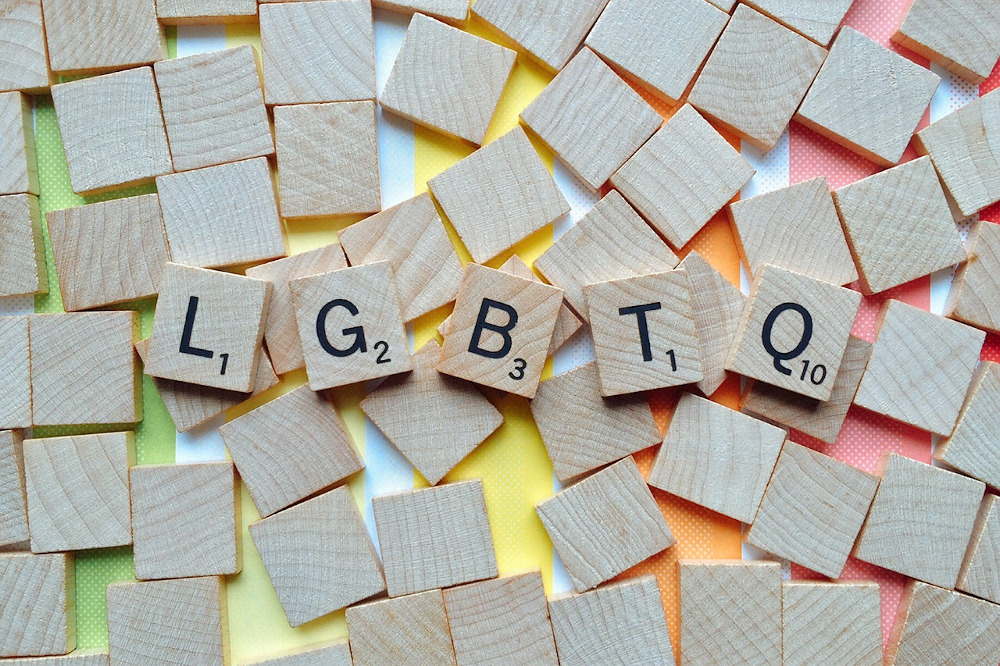 Often over the course of two millennia, when church teaching has come up against developments about the human person and in the natural sciences, there have been those who rallied to decry such humanistic advances as "heretical," "threatening," "unfounded," or "against the natural law." History has witnessed this in terms of the Catholic Church's resistance to recognizing the full humanity of Indigenous people, to rejecting the abject immorality of chattel slavery, and to embracing the universal human right of religious liberty, just to name three examples of the church's institutional sinfulness and its slow course to correction.

Today we are seeing a similar dynamic play out in real time as it deleteriously affects LGBTQ people in the church and broader society. The phrase "gender ideology" has become a rallying cry for such discrimination and defense of inexcusably outdated anthropological foundations. In certain Catholic contexts, recourse to "gender ideology" is placed in opposition to what is presented as a static, universal, Aristotelian-Thomistic anthropology, which is understood to be immutable and divinely revealed.

However, the real problematic ideology at work today is the uncritical promotion of 13th century pseudo-science and ancient philosophical theories that, while interesting and influential, are no longer sufficient to account for important developments in human knowledge and experience since the Middle Ages.

The phrase "gender ideology" is used in both religious and secular contexts, but I am most interested in how it is deployed in Catholic circles to cause grave harm to people already made vulnerable in an unjust society. The most recent and visible invocation of this phrase by a Vatican office occurred last June when the "Congregation for Catholic Education" issued a document decrying the rise of "gender ideology" and cautioning Catholic educational institutions against succumbing to what it characterized as "nothing more than a confused concept of freedom in the realm of feelings and wants."

The Vatican, in its capacity as a non-governmental agency and a religious institution, has for decades sought to discredit LGBTQ rights movements and influence developments in secular law globally.

But as University of Chicago law professor Mary Anne Case notes in a recent scholarly article titled "Trans Formations in the Vatican's War on 'Gender Ideology,' " the Vatican, in its capacity as a non-governmental agency and a religious institution, has for decades sought to discredit LGBTQ rights movements and influence developments in secular law globally.

This has been the case over the course of the last three pontificates, beginning with Pope John Paul II's catechetical pronouncements about "gender complementarity" in what his devotees call "the theology of the body," and it continued through Pope Benedict XVI's identification of what he termed "the dictatorship of relativism" and in Pope Francis' own ad hoc statements signaling his personal displeasure with what he calls "gender ideology," comparing this amorphous concept with "nuclear war" and "Nazism."

Case explains, "Pope Francis's popularity and appeal beyond traditional conservatives, as well as his highlighting of trans[gender] issues in particular, has allowed the specific language of opposition to 'gender ideology' and the rhetorical and pseudoscholarly apparatus associated with it finally to begin to take root in the United States," which explains the recent rise in the phrase's usage. This trend is notable in light of the recent Supreme Court decision, which extends workplace protections to LGBTQ people under Title VII of the U.S. Civil Rights Act, because the U.S. bishops' conference statement on the ruling alludes to themes frequently associated with so-called "gender ideology."

Among the many troubling aspects of this derogatory phrase and the agenda it represents is the ambiguity of the term itself. There are no two sources that agree on what precisely "gender ideology" means, and Case explains that "the multiplicity and variety [of definitions and genealogies] also indicate how very little actual scholarly work Catholic so-called experts on gender theory have done concerning the origins and parameters of the theories they deplore." In other words, it is demonstrably clear that those who invoke "gender ideology" generally don't know what they are talking about. Such folks would do well to listen to leading scholars on the subjects of sex and gender, like Judith Butler of University of California, Berkeley, instead of attacking her and other experts.

That the term itself is unclear apart from signaling the deprecatory agenda of its users should be reason enough for people of faith to reject it and the program of hate and ignorance it represents. But there are also several deep-seated ironies that indicate the hypocrisy at work beneath the surface.

First, one of the common moves people who invoke "gender ideology" make is to suggest it is a new fad intended to corrupt unsuspecting individuals. As I mentioned above, the "solution" to the "problem" of insights arising from studies about sex and gender is to hold up Thomas Aquinas' philosophical anthropology as the corrective and only solution. The irony here is, of course, that Aquinas was accused of a comparable offense in his own time, having "rediscovered" a pagan philosopher (Aristotle) whom he relied upon tremendously while also engaging the received theological tradition with the latest understanding of the human person. Aquinas was also condemned, posthumously in 1277 by the bishop of Paris and the archbishop of Canterbury, for being perceived as "too dangerous."

Now that Aquinas is perceived as the Common Doctor since Pope Leo XIII's 1879 encyclical letter Aeterni Patris, all suspicion associated with Aquinas' innovative and "dangerously" novel theology has been conveniently forgotten. Today theologians ought to be given the latitude to follow a contemporary version of Aquinas' methodology, taking the best resources from the received theological tradition but also the informed insights of experts in various fields of human knowledge. Only in this way will we faithfully fulfill St. Anselm of Canterbury's description of the task of theology to understand more fully the faith we profess — fides quaerens intellectum!

Second, in his 2013 apostolic exhortation Evangelii Gaudium, Francis issued a clear warning against "spiritual worldliness," which included an admonition against those with "an ostentatious preoccupation for the liturgy, for doctrine and for the Church's prestige, but without any concern that the Gospel have a real impact on God's faithful people and the concrete needs of the present time. In this way, the life of the Church turns into a museum piece or something which is the property of a select few."

The irony here is that the presentation of a nearly eight centuries-old understanding of the human person that is somehow complete in itself apart from whatever we might learn about humanity or the world subsequently is exactly the reduction of the faith to a "museum piece." Such an artifact may be appealing and worth study, but it says very little about reality as we understand it today. It's one thing to admire a centuries-old idea for its own sake, it's another thing to deploy that idea as a means to dehumanize and dismiss whole populations of people. 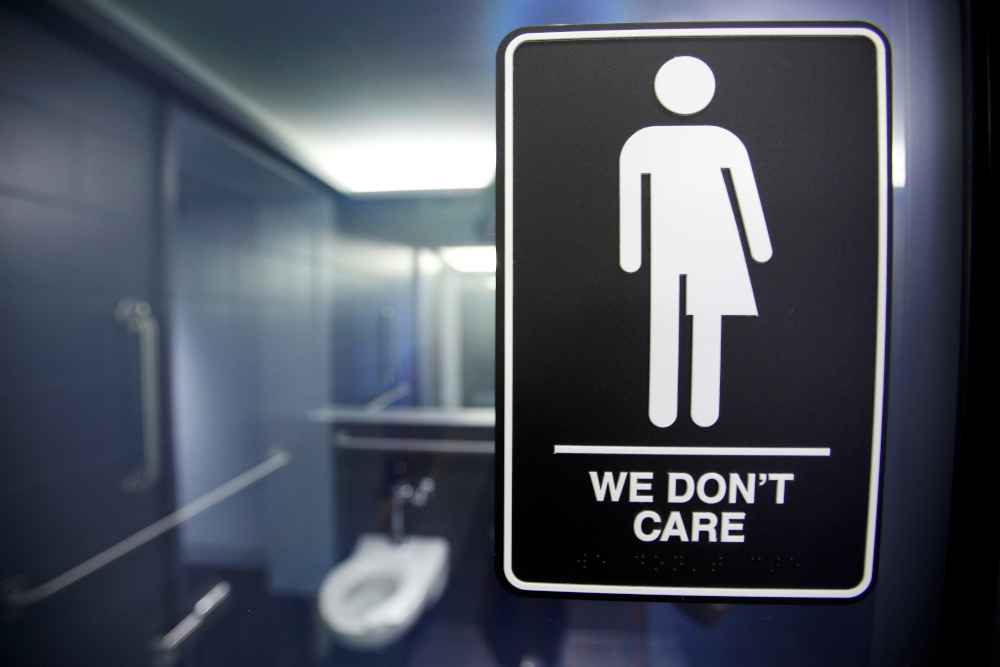 A sign indicating a unisex bathroom is seen in 2016 in North Carolina. (CNS/Reuters/Jonathan Drake)

Finally, one of the common refrains issued by pastoral leaders that condemn "gender ideology" and level harsh criticism of LGBTQ persons and their allies is that they are doing so from a position of pastoral concern and Christian love. Such was the tenor of Oakland, California, Bishop Michael Barber, chair of the U.S. bishops' committee on education, in response to the Congregation for Catholic Education's document last summer. In a press release, Barber stated that the anti-LGBTQ document "provides the light of truth and compassion that is most needed in our world today." The irony here is tied to the fallacious nature of the claim itself that church leaders are merely expressing "pastoral care" or "compassion" by issuing statements and policies that dehumanize whole communities of people. Call it what you like, but such claims appear tantamount to a physically or emotionally abusive parent, spouse, or partner claiming that their violence is grounded in a place of "tough love." In the end, it's still simply abuse.

The time is long overdue to reject specious arguments like those that undergird the right-wing political and ecclesial agendas promoting the boogeyman of "gender ideology." As we continue to learn more from natural and social sciences about the wondrous diversity of God's creation, including the manifold experiences and identities within the human family, all members of the church — but especially those entrusted with leadership — must approach such new understandings with humility. This requires being open to experiences and narratives that are perhaps unlike one's own in a spirit of true dialogue, and this will demand a willingness on the part of the hearer to be changed in heart and mind. There is no better time to begin such a spiritual and pastoral practice of conversion than during June as the world over commemorates LGBTQ pride month.

A version of this story appeared in the July 24-Aug 6, 2020 print issue under the headline: The truth about so-called 'gender ideology'.