by Daniel P. Horan
Opinion
Vatican
This article appears in the Synod on the Youth 2018 feature series. View the full series. 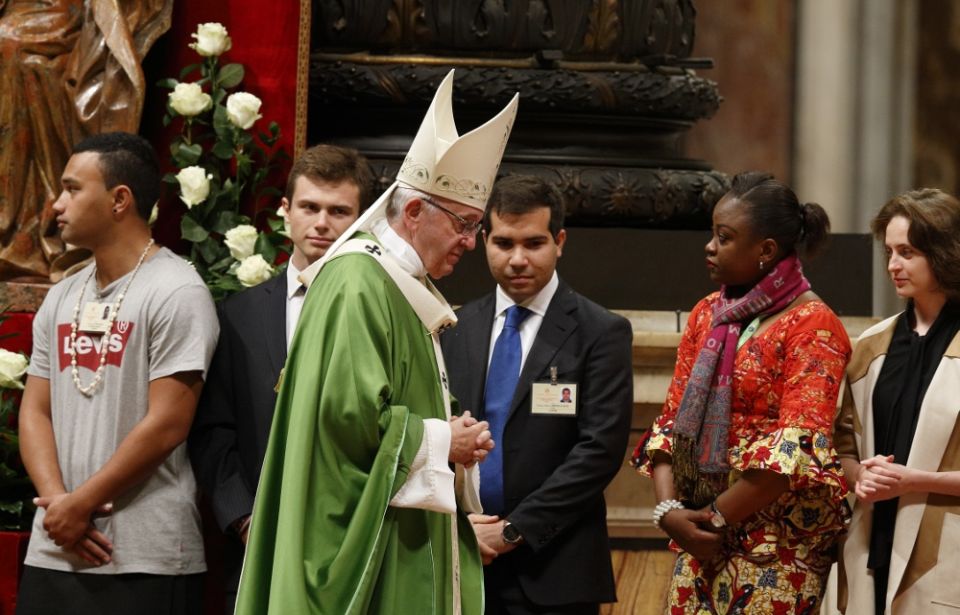 Pope Francis walks to his seat after greeting synod observers during the closing Mass of the Synod of Bishops on young people, the faith and vocational discernment in St. Peter's Basilica at the Vatican Oct. 28, 2018. (CNS/Paul Haring)

Pope Francis should write a post-synodal apostolic exhortation following the close of the 2018 Synod of Bishops on young people, the faith and vocational discernment.

At the Sept. 18, 2018, press conference announcing the pope's apostolic constitution Episcopalis Communio on changes to the rules concerning voting members and the preparation for synods, Cardinal Lorenzo Baldisseri, secretary general of the Synod of Bishops, suggested that Francis might elect not to write a post-synodal exhortation. He might simply affirm that the final synod document is taught exercising his ordinary magisterium, according to Baldisseri.

The practice of writing an apostolic exhortation after a Synod of Bishops became a regular practice during the pontificate of John Paul II, something Benedict XVI and Francis have continued up to now. After the Oct. 3-28, 2018, synod on young people, it is not yet clear what path the Holy Father will choose: write an apostolic exhortation or simply accept the synod's final document as is.

Having studied the major synod documents — the preparatory document from January 2017, the young people's pre-synodal meeting document from March 2018, the instrumentum laboris from June 2018, and now the final document of the Synod of Bishops — and followed as closely as possible the daily briefings about interventions from the floor, I feel strongly that the final synod document is not enough. There are at least a few reasons it remains inadequate.

It is a compromise document, which required the majority of delegates to approve the text, paragraph by paragraph, in order for it to be finally accepted. The result of this laborious approval process is exactly what one might expect: The language was watered down, certain topics were qualified or removed all together, and what began with the potential for a bold, prophetic and inspiring message was reduced to a disappointing state of unremarkable generality.

Their solution was to give extra homework to readers: Read both texts together. This adds another layer of complication.

What are readers to make of the mention of the themes or terms (e.g., use of acronym "LGBT") found in the instrumentum laboris but absent in the final document? Which text takes precedence where there is a discrepancy? If the pope were not to write a post-synodal apostolic exhortation, then how would he account for this instruction to read the instrumentum laboris as the complement to the final document? Does he somehow bring these texts together?

There is currently no mechanism to resolve this novel tension.

There are also the issues of length, repetition and clarity. Insisting that readers of the final document must also read the pre-synodal working document only makes the material more cumbersome (the instrumentum laboris adds an additional 214 paragraphs to the final document's already-lengthy 164 paragraphs) and confusing.

Beyond the confusion around how to negotiate the two-text solution, there is the matter of the uninspiring and, at times, didactic tone of the final document. A question that regularly surfaced for me while reading it was: For whom was this written? What is the audience of this text?

Francis' vision of the synodal process is one of accompaniment, dialogue and listening. This conversational and inviting style resulted in an honest, direct and insightful response from the young people who gathered in March 2018. To a lesser degree, though still better than the final document, the instrumentum laboris carries a feeling of "we're in this together," regularly citing the feedback from young people as well as input from dioceses and bishops' conferences around the world.

But the final document notably lacks this feel. Its tenor is more closely aligned with a "father knows best" approach, which speaks more in the royal "we" (as in "we, the bishops") and addresses young adults in the second or third person rather than as fellow and equal members of the church, which is at the heart of Lumen Gentium and any Vatican II ecclesiology. 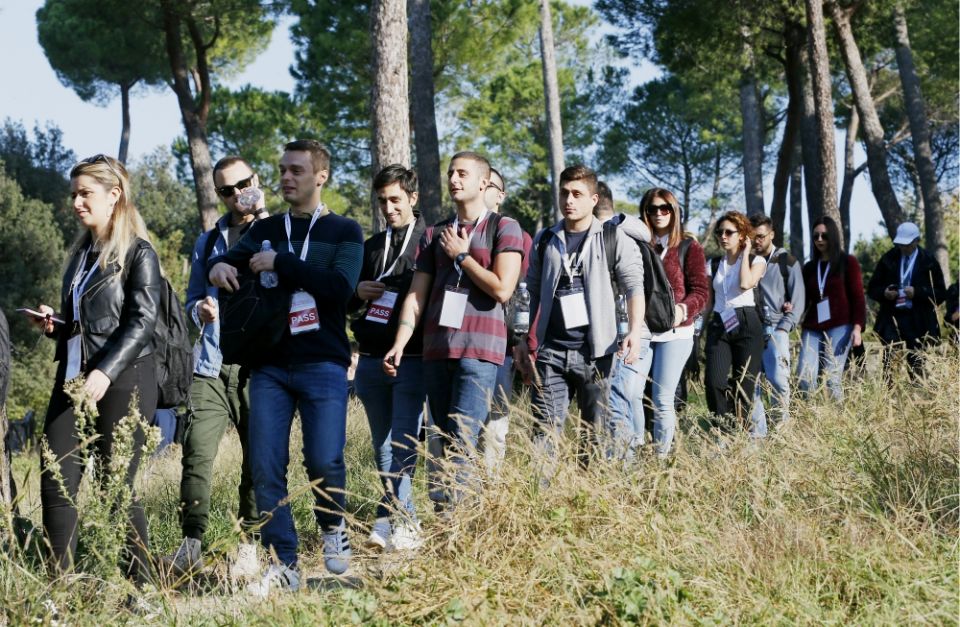 Young people participate in a pilgrimage hike from the Monte Mario nature reserve in Rome to St. Peter's Basilica at the Vatican Oct. 25, 2018. Participants in the Synod of Bishops on youth and young people from Rome parishes took part in the hike. (CNS/Paul Haring)

An example of this dissonant ecclesiological tone appears at the outset of the document. In the "preamble" of the text, the bishops recount the story of the resurrected Jesus appearing to the two disciples journeying on the road to Emmaus as depicted at the end of Luke's Gospel. According to published reports from the English-speaking working groups, this pericope was selected to illustrate the spirit of accompaniment the bishops wished to highlight as the governing theme of synodality in general and the text on young people in particular.

But as Jesuit Fr. Thomas Reese observed, it seems that the bishops may have misidentified just who is which character in the narrative.

This is a truly magnificent story, but if the bishops think they are Jesus and young people are the disciples, they missed the whole point Francis was trying to make. We are all disciples, and the disciples' confusion before Jesus joins them is reflective of the entire church. Or to put it another way, sometimes Jesus may be the young explaining things to the bishops.

There are several clear and simple reasons why it makes sense for Francis to write a post-synodal exhortation on young people.

First, young people deserve to be taken seriously and not just politely listened to and then treated with what might rightly be viewed as well-meaning paternalism (or, worse, condescension). A post-synodal apostolic exhortation could restate with directness and clarity the vision of synodality Francis signaled before and during the synod, a vision consistent throughout his pontificate. It calls for a disposition of accompaniment marked by mutuality, respect, humility, listening, openness to challenge, and good-faith understanding. Francis could address young people directly as his sisters and brothers, as the equal members of the body of Christ that they are, and not merely the ecclesiastical charges they appear to be in the eyes of some bishops.

Second, young people deserve assurance that their experiences matter and that, though confusing or even offensive to some synod participants, the diversity of their experiences is not a threat to authentic church life and communion but, as St. Paul once reminded the Corinthians, it is the very condition that makes the church possible in the first place.

To this end, Francis, who has not shied away from using the moniker "gay" and is known to have friends in same-sex relationships, could do a lot to build trust among LGBTQ persons by using the self-referential terms they prefer, thereby acknowledging their inherent dignity and value.

Third, young people deserve more direct answers to their queries about the role of women in the church and society. When half the world's population is in question, the issue of women in the church is not merely a "Western ploy" or the agenda of "radical feminists," but a matter that calls for serious and concerted reflection, change and implementation.

More inclusive leadership does not necessarily mean changing who is admitted to holy orders — appointing more female parish administrators, diocesan chancellors and curial officials is an approach that can begin today. But with the conclusion of the pontifical commission on women and the diaconate's work in hand, Francis might take this opportunity to address female leadership in the church with changes to the diaconate.

Fourth, young people — and not-so-young people alike — deserve an apology. The most consistent theme in the pre-synodal text from the young people was their desire for a more "authentic" church and leadership. They explain: "Young people express a desire to see a church that is a living testimony to what it teaches and witnesses to authenticity on the path to holiness, which includes acknowledging mistakes and asking for forgiveness. Young people expect leaders of the Church — ordained, religious, and lay — to be the strongest example of this."

With new insight into the role bishops played in covering up sexual abuse, church leaders — including the pope — ought to listen to their younger sisters and brothers and ask their fellow Christians for forgiveness — forgiveness for what they and their predecessors have done and, especially, for what they have failed to do. In the end, the synod bishops avoided direct admittance of wrongdoing and voted out a provision calling for a zero-tolerance policy regarding abuse. The pope can do what the synod participants apparently could not.

Finally, while there are many other good reasons the pope should write an apostolic exhortation in this case, young people around the globe deserve the particular pastoral care that is the unique responsibility of the bishop of Rome. While local bishops, episcopal conferences and other gatherings of bishops rightly exercise ordinary magisterium in their respective jurisdictions, the pope has a distinct responsibility and privilege to teach and provide pastoral care for the universal church.

I urge Francis to exercise this unique ministry and speak not only to young people, but also to his brother bishops and all the faithful — it's not too late.

A version of this story appeared in the March 8-21, 2019 print issue under the headline: Pope should speak to youth about synod .

Broader representation of women in church is a process, cardinal says