The four Christmas movies you should watch this month 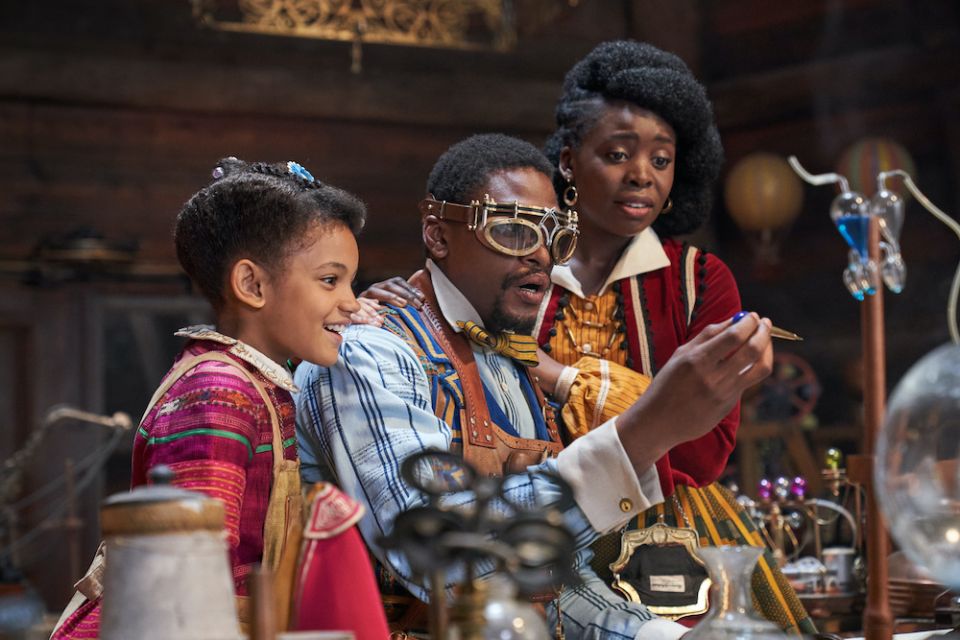 There are so many new productions in release that it is impossible to see them all, let alone review them. Here are four Christmas films for your holiday viewing! Be well!

It's Christmas in the small Victorian village of Cobbleton. Jeronicus Jangle (Forest Whitaker) is a toymaker whose magical inventions delight young and old. When his young apprentice Gustafson (Miles Barrow, then Keegan-Michael Key) steals his latest invention, a talking toy named Don Juan Diego (voice of Ricky Martin), Jeronicus falls on hard times. He withdraws from his toy-making and the toy store becomes a pawn shop. Then his daughter, Jessica, (Anika Noni Rose) leaves home. But years later when his very bright and inventive granddaughter Journey (Madalen Mills) comes to visit, the magic returns and broken lives become whole again. 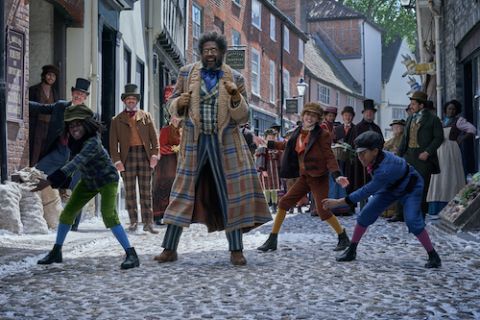 This is a beautifully rendered Christmas musical in which every audience member can find themselves. The film is not explicitly religious, but faith and Christian values shine through. One of my Facebook friends commented that the element of childlike wonder is so strong in the film that it reminded him of Matthew 18:3, that you need to become as a little child, with imagination, unfettered belief and compassion, to enter the kingdom of heaven. The pace of the Netflix production is gentle, and the themes of family and inter-generational reconciliation are optimistic. During a Zoom interview, writer-director David E. Talbert, who was raised Pentecostal, told me that he made sure to weave in elements of virtue and character. I loved hearing Forest Whitaker sing, and young Mills is a revelation. The film features original songs by John Legend, Philip Lawrence and Davy Nathan, and a performance of "This Day" by Usher and Kiana Ledé. It also stars Phylicia Rashad and Hugh Bonneville.

Several years after the death of her dad, teen Kate Pierce (Darby Camp) is grumpy because she and her brother Teddy (Judah Lewis) and mom Claire (Kimberly Williams-Paisley) are spending Christmas at a resort in Cancun rather than at home in the snow. To make matters worse, her mother's boyfriend, widower Bob (Tyrese Gibson) and his talkative son Jack (Jahzir Bruno*) are there, too, and it seems they will soon become a blended family. But when a disgruntled elf named Belsnickel (Julian Dennison) — who was banished to the South Pole — creates a veil out of the aurora borealis to bring Kate and Jack to the North Pole and create havoc by stealing the star from the Christmas tree, a life-changing adventure begins.

Kurt Russell reprises his role of Santa, and Goldie Hawn is Mrs. Claus, who gains Kate's approval for all the upgrades she has made to Santa's village. Writer-director Chris Columbus has done something I've never seen in a Christmas film: He connects the myth of Santa to St. Nicholas, a bishop in Turkey, and makes the star over Bethlehem the source of Christmas grace and spirit. It is interesting that this year, on Dec. 21, Jupiter and Saturn will align for the first time in 800 years and create what some people believe was possibly what happened when the star of Bethlehem appeared as spoken of in the Scriptures. Although Belsnickel's very naughty elves and Santa's elves get into elf battles that go on a little too long, this is a family movie that deals with grief, loss, healing and growing in age and grace.

Official trailer for "The Christmas Chronicles 2" on Netflix's YouTube channel

"Dear Santa" is so inspiring a film that it may help you think better of the United States Postal Service (USPS) in a year when its reputation has suffered in the run-up to the November elections. The USPS has been answering letters written to Santa Claus for 150 years, and its volunteer elves and those from the community have responded to thousands received annually for more than 100 years. The film tells this story and visits homes, schools and post offices from Texas to New York and beyond to tell the continuing behind-the-scenes story of the magic of giving and receiving at Christmas time. It is very moving to read letters that children, and sometimes their parents, write to Santa to fulfill their desires or so often to meet a need for a child or a family.

One USPS elf points out that when selfishness seems so dominant in our day, most children don't write asking for themselves but for their siblings or their parents. This moving and emotionally manipulative film highlights the stories of people who take part in USPS Operation Santa. In Chicago and New York, adults and children can read hard copies of the letters received in post offices and "adopt" them. The head elf from the Paradise, California, post office where 30,000 homes were lost in the 2018 fire, takes special care to answer all the letters they receive. But know that these are wise post office elves; the boy who wanted 10 bunnies got just one. You cannot help but be moved at the innocence of children and the generosity of complete strangers to do an act of kindness at this holy time of year. "Dear Santa" was filmed in 2019 before the pandemic. Even though some home delivery methods may change, according to the Operation Santa website, all the letters have been adopted to date. But check back soon because thousands arrive every day.

"You Are My Home"

In this new independent film, 11-year-old Alexandra (Eva Ariel Binder) lives with her undocumented immigrant mother near McAllen, Texas. When Immigration and Customs Enforcement agents raid the home they share with other families, Alex grabs a bag and runs to a friend's home as she and her mother had planned. He is not there, but his dog is waiting on the porch. Together they spend the night in an alley behind a coffee shop. The next morning, Alex asks an uptight young businesswoman, Chloe (Angel Parker), for help. Chloe calls her friend Sloane (Alyssa Milano) who works for children and family services. Though she takes Alex home for the night, she knows she has to find another temporary home for her.

So she asks Chloe, who lives alone, to take Alex. Due to her own personal losses, she hesitates to take in the young girl and agrees to do so only through Christmas. They get off to a rough start. 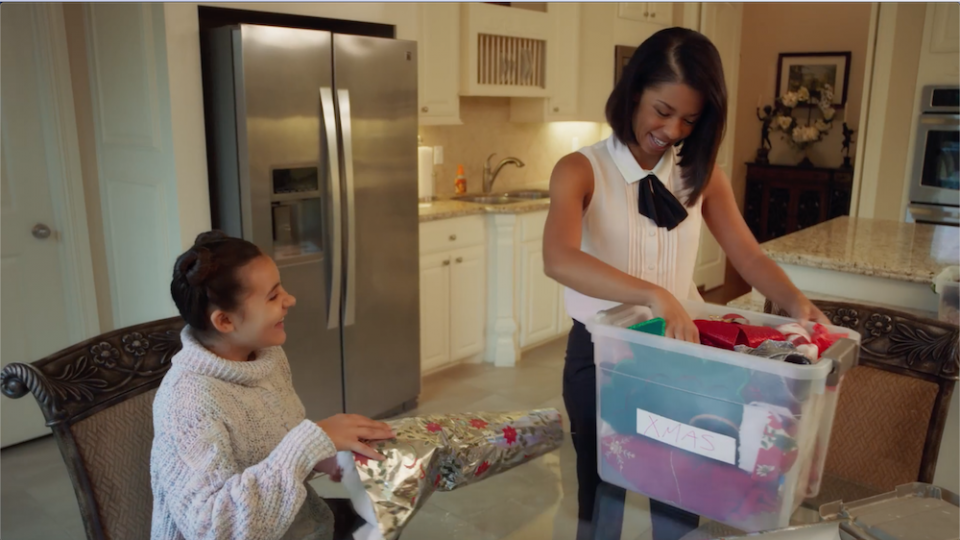 Eva Ariel Binder as Alexandra, left, wraps presents with Angel Parker as Chloe in "You Are My Home" (WAG Entertainment and Hollywood Media Bridge)

Meanwhile, Chloe keeps meeting Carlos (Cristián de la Fuente) around the town putting up Christmas lights, not because he believes in Christmas but because it's his job. What we have now is a set up for what could be a typical Hallmark-style Christmas movie, but this one is different. There is a religious faith dimension, as compared to feel-good romance that passes for inspiration in many Hallmark films, and the story reflects a harsh social reality not often seen in holiday movies: the fragile status of immigrant families in the United States. And then comes the feel-good romance. The movie needed a consultant who knew that Methodists recognize only two sacraments and not seven, but I am not holding that against the film. The cast is racially diverse, the story dramatic, enjoyable and inspiring. The entire movie was filmed in the Rio Grande Valley in South Texas.

YOU ARE MY HOME- Official Trailer- NOW streaming on Netflix

*An earlier version of this column misspelled Bruno's name.

Sr. Rose Pacatte, a member of the Daughters of St. Paul, is the founding Director of the Pauline Center for Media Studies in Los Angeles.

Opinion | The four Christmas movies you should watch this month