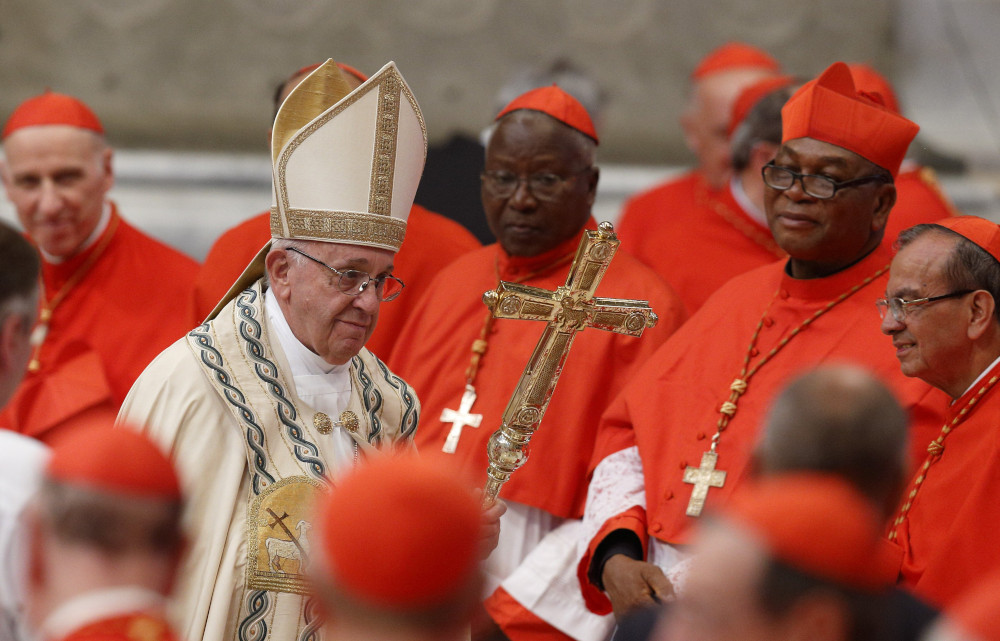 Pope Francis leaves after a consistory to create 14 new cardinals in St. Peter's Basilica at the Vatican in this June 28, 2018, file photo. (CNS photo/Paul Haring)

Pope Francis is reorganizing the Vatican Curia — the church's administrators and his senior staff — and may name new cardinals in June.

Francis' new apostolic constitution, "Praedicate Evangelium" ("Preach the Gospel"), issued last month, noted that the heads of dicasteries and other offices that manage the church need not be ordained. This highlighted Francis' stated aim to give "more space" to women in the church.

Most of the important dicasteries are as a matter of fact headed by cardinals. But if any Catholic can head a curial office, the question becomes, does the title come with the job? More importantly, is the title needed to do the job?

If the main duty of a cardinal is to be an adviser to the pope, and there is no ordination required, it could make sense to restart the tradition of lay cardinals and to include women in the mix.

Since the 16th century, cardinals have come mostly from the ranks of priests and bishops, but this has not always been the case.

Some Spanish and Italian royals were created cardinals in the medieval church. More recently, Pope Pius IX named the curial lawyer Teodolfo Mertel a cardinal, two months before ordaining him deacon in 1858.

Mertel was not exactly a lay cardinal — he received clerical tonsure, a rite just short of ordination, in his late 30s — but he remained a cardinal deacon for the rest of his life.

As auditor of the papal treasury, he oversaw a good part of the Vatican's money.

There is even historical evidence of female deacons doing much the same. A sixth-century inscription recalls the Deacon Anna, who, with her brother, appears to have served as the treasurer of Rome.

Under the 1917 Code of Canon Law, however, anyone named cardinal was required to be at least a priest. The 1983 version of the code dictates that in addition to being chosen from among men who are at least priests, new cardinals are to accept ordination as bishops. Appointing a lay man or woman would require a change to, or at least a dispensation from, the law.

Yet in the late 1960s, Pope Paul VI considered making the French philosopher Jacques Maritain a lay cardinal, an idea Maritain himself rejected. There is a rumor that Mother Teresa turned down Pope John Paul II when he asked her to become a cardinal.

So lay and female cardinals are not beyond the realm of possibility. The question is, would it make any difference?

It would certainly be interesting. Lay or deacon cardinals would be admitted to the College of Cardinals, which since 1179 has elected the next pope. It's highly unlikely a lay or female cardinal would be elected the bishop of Rome.

But Francis has already named a layman, former journalist Paolo Ruffini, to head the Dicastery for Communication, and the pope's emphasis on the church's mission of evangelization signals that his choice of personnel — male or female, married or single, ordained or not — depends solely on an ability and willingness to do the job within that context.

The message of "Praedicate Evangelium" is that becoming a cardinal is secondary and relative only to how gaining the title would or would not advance the task at hand. That includes expanding management and ministry to laypeople. That also includes telling the world that woman are equally talented and capable human beings.

So, has the time has come for female cardinals?

Maybe so, maybe no. But it is a new church.