After 9 years, Francis reorganizes Vatican with focus on evangelization, roles for laypeople 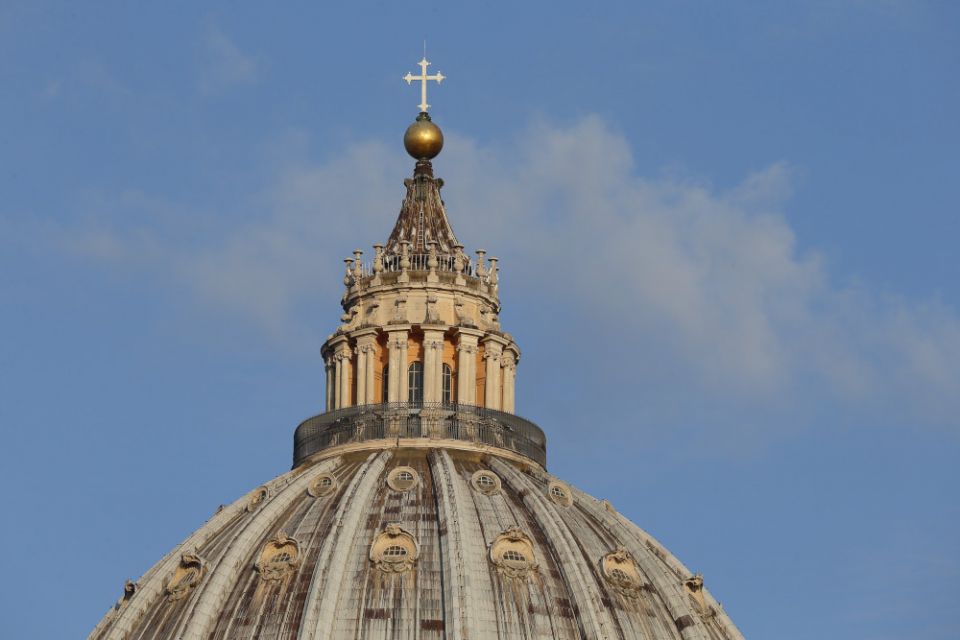 The dome of St. Peter's Basilica is pictured at the Vatican July 12, 2019. (CNS photo/Paul Haring)

Rome — Pope Francis has overhauled the Vatican's central bureaucracy for the first time in over 30 years, dramatically expanding the number of top leadership roles lay men and women can hold and reorganizing Vatican departments under the central priority of evangelization.

The 54-page text of the new Apostolic Constitution was released on March 19 — 9 years to the day of Francis' inauguration as pope in 2013 — and fulfills a top priority of the College of Cardinals, who made clear their desire to improve and decentralize church governance when they gathered in Rome to name a successor to the then-recently retired Pope Benedict XVI.

Under the title of Praedicate Evangelium ("Preach the Gospel"), the new document stresses that evangelization is the central task of the church.

"The reform of the Roman Curia is also placed in the context of the missionary nature of the church," states the preamble to the text.

Under the new constitution, the Vatican's Secretariat of State — which is broadly responsible for helping the pope manage the Vatican and for conducting the Holy See's international relations — remains the highest office, followed by 16 different Vatican departments.

The new structure eliminates previous distinctions between Vatican congregations and councils, with the newly streamlined title of "dicastery."

Most notably, the document states that "any member of the faithful can preside over a dicastery," an update to the 1988 constitution, which specifically stated that Vatican dicasteries are headed by a "cardinal prefect or the presiding archbishop."

Among the 16 dicasteries, the newly constructed Dicastery for Evangelization is given top listing, just ahead of the newly reformed Dicastery for the Doctrine of the Faith, the oldest and, for centuries, arguably the most powerful office of the Roman curia.

As a sign of the office's significance, the dicastery for evangelization will be headed directly by the pope — a parallel to how the Roman pontiff directly headed the doctrinal office until 1968.

The new office is responsible for the church's evangelical efforts around the world, including supporting new churches, and is divided into two sections: one responsible for fundamental questions surrounding evangelization and the other tasked with overseeing places of "first evangelization."

The section on fundamental questions is tasked specifically with "reflection on the history of evangelization and mission, especially in their relations with the political, social and cultural events that have marked and conditioned the preaching of the Gospel."

In addition, that section will be expected to support local churches in the "process of inculturating the Good News of Jesus Christ in different cultures and ethnic groups, and helping their evangelization, with particular attention to expressions of popular piety."

The reformed Dicastery for the Doctrine of the Faith, which is listed second among the departments, follows the restructuring of that office set in motion in February, with autonomous doctrinal and discipline sections that will be coordinated by separate secretaries, both of whom will report to the prefect of the dicastery.

The constitution also now relocates the pope's clergy abuse commission, known formally as the Pontifical Commission for the Protection of Minors, within the Vatican's doctrinal office. The restructuring marks a change from earlier draft versions of the constitution, which had confirmed the commission as an "independent institution connected to the Holy See, with an advisory function at the service of the Holy Father."

The new constitution says the commission will remain composed of a president, a secretary and members appointed by the pope, and will continue to operate according to its own statutes.

The current president of the commission, Boston Cardinal Sean O'Malley, immediately praised the new structuring, saying in a statement that "for the first time, Pope Francis has made safeguarding and the protection of minors a fundamental part of the structure of the Church's central government: the Roman Curia."

While O'Malley said that the reorganization would ensure safeguarding is a priority throughout the curia, former commission member Marie Collins, an Irish clergy abuse survivor who resigned from the group in frustration in 2017, immediately took to social media to express concern, saying it has lost its independence.

Among other shifts indicated by the new constitution:

A complete list of the 16 newly reformed dicasteries is:

The heads of each dicastery, under the new constitution, will serve five-year terms, renewable once. No personnel changes were announced upon the publication of the constitution, but they are widely expected in the coming months, with many of the current prefects having served beyond the five-year limit.

Long road to reform and co-responsibility

Over the nine years of Francis' pontificate, a group of cardinal advisers from around the globe have met regularly in Rome, on average of four times a year, with the primary task of drafting the new constitution.

According to the new text, the constitution aims to promote a "spirit of healthy decentralization" to maximize the roles in which local dioceses and bishops' conferences can execute their work, sharing in a "co-responsibility" with the church's central offices in Rome.

All Roman curia personnel, according to the constitution, serve first and foremost to further the "mission of the Roman pontiff and of the bishops in their respective responsibilities towards the universal Church."

"This service must be animated and carried out with the highest sense of collaboration, co-responsibility and respect for the competence of others," the text states.

Vatican | After 9 years, Francis reorganizes Vatican with focus on evangelization, roles for laypeople

On first Friday of Lent, pope speaks on nature of true fasting