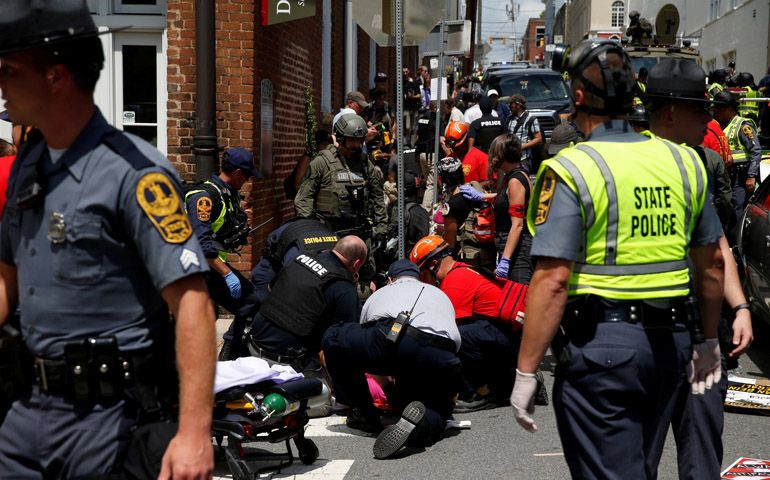 Rescue workers assist people who were injured when a car drove through a group of counter-protesters during a white nationalist rally in Charlottesville, Va., Aug. 12. (CNS/Joshua Roberts, Reuters)

Charlottesville, Virginia, faces the same kind of town-and-gown struggles all college towns face. It is, famously, home to "Mr. Jefferson's university," the central campus Thomas Jefferson designed still functioning as the heart of the now sprawling school he founded. It is also a southern town, with monuments and memorials to the Confederacy, not far from the battlefields upon which the Army of Northern Virginia fought under their legendary commander General Robert E. Lee.

What we witnessed this past weekend, however, was not a town-and-gown struggle. Organized racism, emboldened by the election of a president who flirted with white nationalism during his campaign, took its hatred to the streets where it became violent. One person was murdered and two police officers were killed in an accident as they responded to the turmoil.

There was nothing spontaneous about the events this weekend. The protest was announced in advance. James Alex Fields Jr., the man charged with driving his car into a crowd of protesters and killing a woman, was from Ohio, not the Shenandoah Valley. These racists and self-identified Nazis came spoiling for a fight.

We witnessed, as well, the muted reaction of a president who likes to speak clearly, who likes to draw clear lines between what he perceives as right and wrong, between friends and enemies. But this time, we watched him waffle, discerning a moral equivalence where none existed. "We condemn in the strongest possible terms this egregious display of hatred, bigotry and violence on many sides," President Donald Trump said Saturday afternoon, repeating the words "many sides" for emphasis.

No, Mr. President. The hatred and bigotry were on one side, not many sides. Those who seek racial reconciliation are not haters. We can discuss the efficacy of different policies to eradicate the effects of America's original sin. We can argue about erecting and removing Confederate statues and the whitewashing of history they represent. But, the bigotry, defined as irrational prejudice, was on one side in Charlottesville and one side only. And, violence is the price a society pays for injustice that has become intolerable.

We witnessed something else this past weekend: The initial failure of some religious leaders, including the president of the United States Conference of Catholic Bishops, Cardinal Daniel DiNardo, to correctly calculate the moral values at stake and give voice to an appropriate sense of moral outrage at the rise of racism and the violence it has spewed.

DiNardo's statement mentioned racial violence, but it did not mention racism. It condemned "violence and hatred" but did not specify the source. The cardinal said the bishops "stand with all those oppressed by evil ideology" but, again, did not specify what that ideology was. He noted the bishops had formed a task force to "work for unity and harmony in our country" but neglected to mention that such unity and harmony were sought in the face of ugly and persistent racism. Whoever drafted that statement should be fired.

The next day, though, the USCCB came back with a second statement, co-signed by DiNardo and Bishop Frank Dewane, chairman of the USCCB Committee on Domestic Justice and Human Development, that better captured the enormity of Saturday's events.

"As we learn more about the horrible events of yesterday, our prayer turns today, on the Lord's Day, to the people of Charlottesville who offered a counter example to the hate marching in the streets.

"We stand against the evil of racism, white supremacy and neo-nazism. We stand with our sisters and brothers united in the sacrifice of Jesus, by which love's victory over every form of evil is assured. At Mass, let us offer a special prayer of gratitude for the brave souls who sought to protect us from the violent ideology displayed yesterday."

Other leaders in the U.S. Catholic Church were more quickly able to get to the heart of the matter. Cardinal Blase Cupich of Chicago responded directly to Trump's prevarication Saturday, tweeting: "When it comes to racism, there is only one side: to stand against it."

When it comes to racism, there is only one side: to stand against it. https://t.co/YXv3VtRr7H

And in Philadelphia, Archbishop Charles Chaput issued a powerful statement. "Racism is a poison of the soul. It's the ugly, original sin of our country, an illness that has never fully healed," Chaput said. "Blending it with the Nazi salute, the relic of a regime that murdered millions, compounds the obscenity. Thus the wave of public anger about white nationalist events in Charlottesville this weekend is well warranted." Bracing words for a bracing event. Kudos to both Chaput and Cupich.

The Episcopalian clergy were invited in advance by the Diocese of Virginia to join in a counterprotest to the white supremacist rally. Wouldn't it have been something to see the Knights of Columbus in their plumed hats standing arm-in-arm with the Episcopalian clergy? (They would be well-advised not to bring the ceremonial swords!) Or for the Catholic bishops of Virginia to issue a letter to their clergy calling for them to address this evil of racism from their pulpits on Sunday. The Gospel reading of Jesus confronting saving a fearful Peter was certainly apt for an examination of the spiritual roots of racism!

The reluctance by some Catholic clergy to address vile racism head-on and by name is especially egregious because the white nationalists claim they wish to restore "white Christian America." They wrap themselves in the cross as well as the flag. And, this did not begin this weekend. Two unrelated events conspired to dull the moral sensibilities of the Catholic clergy: the pro-abortion stance of the Democrats in the 1970s and the Southern strategy adopted by the Republican Party after the passage of the Civil Rights and Voting Rights Acts in the mid-1960s. Too many Catholic leaders correctly stated abortion was a vitally important issue but incorrectly stated it trumped all other issues. So, we looked the other way as the Republican Party became the party of racial dog whistles and, under Trump, of German shepherd whistles. When some of us tried to point out the moral absurdity of such an exclusive focus on abortion, we were called bad Catholics. Of course, the same people calling us bad Catholics now call the pope a bad Catholic so at least we are now in good company!

All this weekend, one memory haunted me, the memory of election night 2008, the memory of seeing a million people crowd into Grant Park in Chicago on an unseasonably warm evening, the memory of Rev. Jesse Jackson crying tears of joy, the memory of our young newly elected president and his beautiful family coming out to greet the crowds, noticing how wet my own shirt was getting as the evening went on, thinking our country had turned a corner, that whatever you thought of Barack Obama or his policies, it was an unadulteratedly good thing that the country had elected its first black president. And it was. We the People had turned a corner. Turns out, the road after that turn was bumpier than we expected, and there was more racism abroad in the land than we thought, and more politicians willing to exploit that racism than we realized.

That memory from almost nine years ago is a memory of premature joy, but not of misplaced joy. Overcoming racism remains a challenge but it remains a moral imperative. The human heart inclines more to love than to hate, as Obama tweeted this weekend. This side of the eschaton, there will always be violence and hatred and perhaps there will always be racism. Let's hope there will always be Christian and Catholic leaders ready to denounce it for the evil sin it is and that in the years ahead there will be more nights like election night 2008 and fewer weekends like the one in Charlottesville.

Column | Hate, racism were on one side in Charlottesville, not many