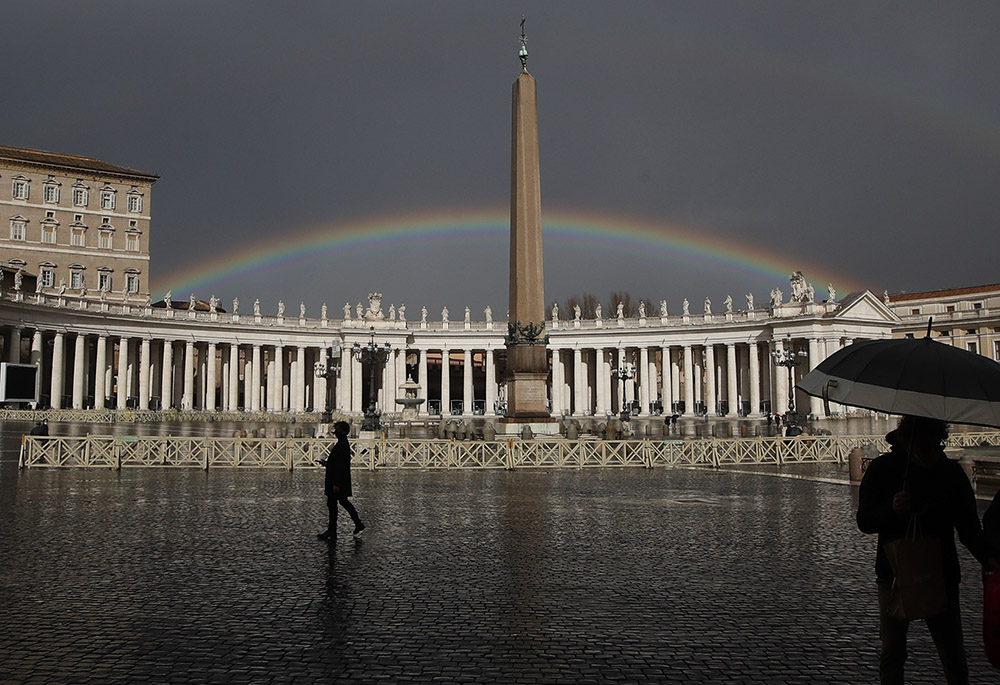 The church has rightful shame and remorse for some things the institution has done, views it has espoused and teachings it has taught over the centuries. These include the Crusades and its adjacent Islamophobia, justification of chattel slavery, complicity in colonialism, prohibition of religious liberty, portrayal and treatment of women, and its history of antisemitism, among others.

Over time we have come to recognize these attitudes and behaviors to be indefensible. And I believe that, in time, history will likewise judge the discrimination against and treatment of LGBTQ persons by the church and many of its members as similarly reprehensible.

Recently, a number of signs suggest my intuition is correct. Take, for example, the bold and direct statement of Luxembourg Cardinal Jean-Claude Hollerich, who leads the pan-European Catholic bishops' conference. According to a recent article, he said he considered the church's assessment of homosexuality relationships as sinful to be wrong.

Calling for a substantial reform of the church's teaching on this matter, he added, "I believe that the sociological-scientific foundation of this teaching is no longer correct."

Admittedly, Hollerich's keen sense of perspective and direct critique of this problematic church teaching represents something of a "minority view" among ecclesial leaders today. However, this is not the first time that the ostensible minority view may turn out, in the end, to prevail against some seemingly long-standing theological perspective or social convention. 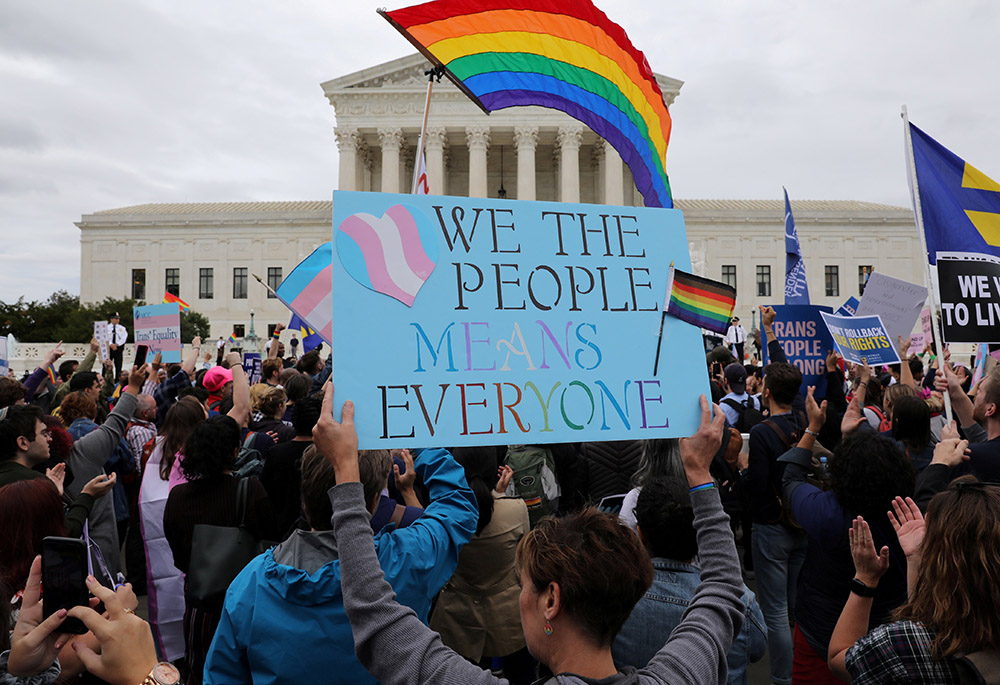 LGBT activists in Washington hold a rally outside the U.S. Supreme Court in this 2019 file photo. (CNS/Reuters/Jonathan Ernst)

We only have to look back over the last century to the case of the Jesuit theologian John Courtney Murray who advocated for the congruency of the "American experiment" of religious liberty as a basic human right and the teaching of the church, which at the time forbade it. Before Vatican II he was silenced and disciplined for his views. After the council, his views became the authoritative doctrine of the church as articulated in the Declaration on Religious Freedom, Dignitatis Humanae.

Ironically, those who defend the discrimination against LGBTQ persons at Catholic institutions often do so with appeal to religious liberty and their right to free exercise of religion.

In addition to the development in teaching on religious liberty, I am reminded of another situation from the 16th century, that of Dominican friar Bartolomé de las Casas and his defense of the inherent dignity and value of the native peoples of the Western Hemisphere against a prevailing theological and civil argument that rejected the rights of Indigenous communities at the time of Spanish colonization of the so-called "New World."

The now-classic theological confrontation within the church of Spain between de las Casas and Juan Ginés de Sepúlveda on this topic has become known as the "Valladolid Debate" in reference to the city in which the debate took place between 1550 and 1551. At stake was the anthropological and moral status of the newly encountered Indigenous populations of the Americas.

The colonial logic of the time, informed by an Aristotelian-Thomistic anthropology advanced by Sepúlveda and others, argued for Aristotle's hypothesis that certain peoples are "natural slaves" and that it would actually be in their best interest to be enslaved because of their presumed inherent inferiority. Sepúlveda also argued that, as "heathens," the native peoples and their traditions were in violation of divinely ordained natural law, which further justified their subjugation at the hand of the conquistadors. The case made by Sepúlveda reigned as the needed justification for the continued project of Spanish colonization. And church teaching of the time was used to justify this atrocity. Many thousands of individuals were abused and murdered as a result, both in the name of the crown and of Christ.

Representing the clear minority view of the time, de las Casas rejected the premise of "natural slaves" and inherent inferiority. Unlike Sepúlveda who had never visited the "New World," de las Casas was speaking from lived experience and with knowledge of the reality of the communities about whose identity, worth and rights were being debated in Europe. To many people, especially the civil and religious leaders in Spain, the argument was merely theoretical.

But de las Casas understood from firsthand experience what the defenders of the mistreatment of the native peoples couldn't imagine: these Indigenous women and men, whose lives and ways seemed foreign and "uncivilized" to the colonizers and continental theologians, were inherently good, deserving of equal dignity and respect, and ought to be recognized as fellow children of God. Their mistreatment, enslavement and murder could not be justified and was sinful.

Centuries later, with the moral and historical clarity that comes with time, no Christian could justify taking the position of Sepúlveda and the church of his day. It is clear that de las Casas was right and his defense justified, while the then-prevailing colonial view of the native population is recognized today as abhorrent.

I mention this historical case not because I wish to make a false equivalency between the slavery, mistreatment and murder of Indigenous peoples in the 16th century and the discrimination and treatment of LGBTQ individuals today.

However, I do believe there are at least three points worth noting for our time and in this contemporary case. First, church teaching develops and, in fact, changes. It doesn't happen often, but teaching has and ought to change when we realize that the remote possibility of error in non-infallible teaching is discovered. The church's view on slavery and religious liberty are just two of many examples where this has been the case. And it is likely that the current institutional views on the treatment of LGBTQ individuals not only should, but will also change.

Second, it can be difficult in the actual historical moment of debate to make sense of which response is correct. We should resist maintaining the status quo merely because "that's the way it's always been." It is quite possible that the way it has been is correct and should be sustained, but it is also very likely that there is something seriously wrong that needs to change.

But the only way we will come to know the right answer in this case is by engaging in theological research and dialogue that takes seriously the experiences of LGBTQ individuals in a way analogous to the seriousness that de las Casas took the experiences of Indigenous Americans. In the meantime, all people should be free of discrimination on the basis of sexual orientation or gender at Catholic institutions and faith communities.

Church teaching develops and, in fact, changes. It doesn't happen often, but teaching has and ought to change when we realize that the remote possibility of error in non-infallible teaching is discovered.

Third, there is a long and growing list of women and men who have been fired from Catholic institutions because of their LGBTQ status or relationships. While it may be difficult for some people, especially those in positions of ecclesiastical power and authority, to see it now, I believe that history will judge the church harshly for the way its institutions and leaders have treated LGBTQ individuals. In time, as with the crusades and colonization and slavery, the church itself will also come to see this injustice for what it is: the overt discrimination and effective dehumanization of our sisters and brothers in Christ, fellow beloved children of God deserving of equal respect, love and protection.

British journalist Christopher Lamb recently suggested in The Tablet of London that various papal statements and novel inclusion of previously marginalized organizations and communities might signal that, "the Church is changing its approach to LGBTQ Catholics." Several LGBTQ advocates have responded to such a seemingly optimistic assessment with caution and incredulity. Where there is skepticism, it is grounded in recognizing the slowness of needed change and the deleterious consequences that follow from maintaining dehumanizing policies, practices and teachings.

The church can and must do better, and the time is now. I hope that Cardinal Hollerich's brother bishops, especially the bishop of Rome, embrace the Holy Spirit's call to do the right thing sooner rather than later. The current synodal process is one such providential opportunity to align church teaching on LGBTQ persons and relationships with reality grounded in the best of medical and psychological research.

Not only will history judge the church's past and current treatment of LGBTQ persons, but more importantly God is judging the church too.