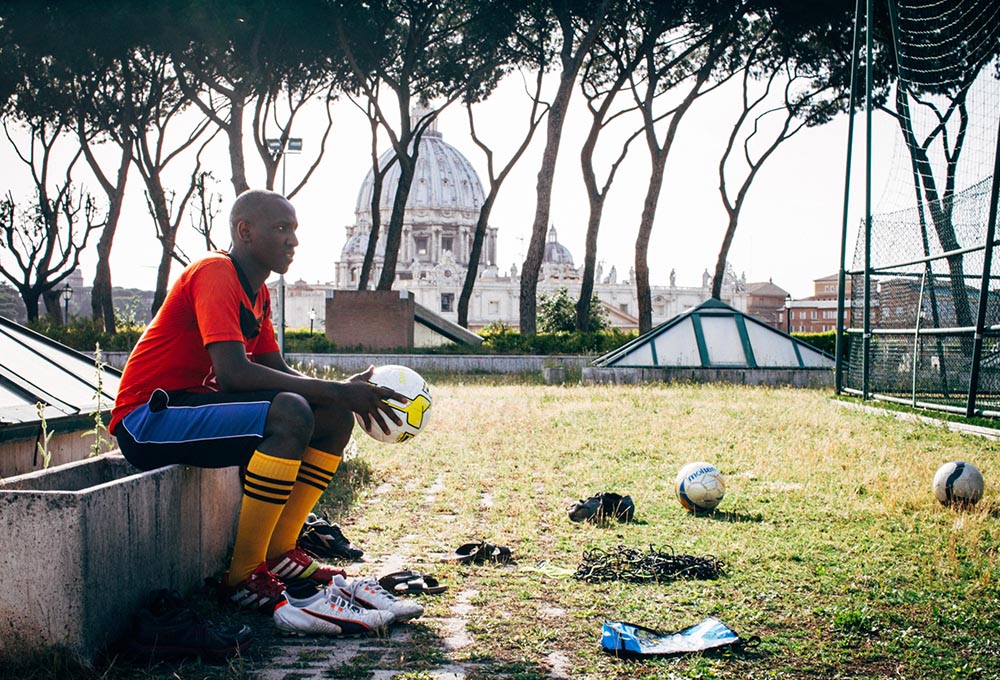 Canadian documentary filmmakers Brent Hodge and Chris Kelly like to make films about comedy, pop culture and unique stories that reveal "obscure worlds that people don't know about," explained Hodge in a telephone interview with NCR.

About six years ago, they heard about a yearly Italian soccer match called the Clericus Cup, a tournament for seminarians from around the world studying in Rome. It is certainly unique, so they decided to pack up their equipment and head to Rome to make a sports documentary.

Kelly, whose dad, Kenneth, at that time was studying to be a permanent deacon, went with them to help navigate the ecclesial world they were about to enter.

The Clericus Cup, founded in 2007, consists of two divisions of teams of seminarians, a few priests and maybe a bishop now and then, from 16 Roman seminaries. It includes players from 66 countries and five continents, but as it happened, in 2016-17 when the film was being shot, there were no Canadian seminarians in the league.

The tournament takes place March through May every year. The North American College has won three times, but the Collegio Urbano, with students from Africa and Asia, has won four times, the most of any team.

In "The Holy Game," after some comments by seminarians about the priesthood being for life, its purpose to become a better person, to strive for perfection and the need for teamwork, we meet the jovial Felice Alborghetti of the press office of the Centro Sportivo Italiano arriving at his office via motor scooter. He is the organizer of the tournament and is especially interested in promoting the Clericus Cup because of its explicit focus on the sport scene in Italy.

According to Kelly, "We didn't script this guy. We just let him be himself. He is a wildly hilarious character with a quirky Italian swagger. He's great."

After an introduction to how the 2017 bracket for the tournament is set up, we are introduced to players and begin to see some action. My favorite player is Eric Atta Gyasi from Ghana who studies at the Collegio Urbano. He is academically challenged (it took him more than 12 years to finish his studies before ordination), but he's the best player of all the teams and truly a bright spirit in the film because of his sense of humor and enthusiasm.

I interviewed Hodge and Kelly separately by phone, and they both admitted right away that the film they completed is not the one they set out to make.

"We met these men and characters," said Kelly, "and they changed the course of the film. Their stories were fascinating, and a genuine curiosity overtook us. What the seminarians told us felt more interesting than the soccer storyline, which, admittedly, is limited."

Soon the emphasis on soccer is replaced with interviews of seminarians: Grayson Heenan from Detroit, Mike Zimmerman from Boston, Duarte Rosado, a Jesuit from Lisbon, and of course, Eric from Ghana. "When you have four amazing guys about to make this commitment," said Kelly, "especially in this day and age when people won't even commit to phone plans, and these men want to commit to the priesthood, it really gets your attention."

Early on, they interview Fr. Óscar Turrión, the rector of the Pontifical International College Maria Mater Ecclesia and member of the Legionaries of Christ. He is generous with his commentary on the priesthood and the challenges that confront the seminarians.

As I was watching the film, I was reminded of the older priest Father Havel (Milos Forman) who taught Father Brian (Edward Norton) in the 2000 film "Keeping the Faith." Father Brian asks Father Havel's advice when he is tempted by the reappearance of an old girlfriend, Anna Riley (Jenna Elfman).

Father Brian says, "I keep thinking about what you said in seminary, that the life of a priest is hard and if you can see yourself being happy doing anything else you should do that."

Father Havel responds, "That was my recruitment pitch, which is not bad when you're starting out because it makes you feel like a marine. The truth is you can never tell yourself there is only one thing you could be. If you are a priest or if you marry a woman, it's the same challenge. You cannot make a real commitment unless you accept that it's a choice that you keep making again and again and again."

The filmmakers felt lucky when Turrión agreed to talk with them. "But we had no idea where his story was going to go," Hodge told me. "He was older, the rector of the college, he was happy and had a joy of life about him, and he was the first one in this codified, church world we felt welcomed by. Our film is in a verité style and we had no agenda. We just let the story unfold."

"I was shocked, but I didn't want to judge." Kelly said, "We finished filming in June 2017 and the news that Fr. Óscar Turrión had two children and was living a double life, broke in October."

I asked Kelly how he felt about this, and he said, "It was challenging. We delayed the film for three years because we wanted to follow up with him after he was dismissed from his role as rector and his congregation. He had said in the film, 'God doesn't want a happy priest, he wants a happy man,' then there was this. He was being duplicitous, but I guess he had to be under the circumstances; he knew when he was talking with us that this would come out."

The directors chased Turrión for three years and finally connected through social media. Two brief Zoom interviews are in the film. Kelly said, "It feels like he is in a better place now."

The filmmakers did not want the film to become only the Fr. Turrión story, and indeed it is not, though the pages of the Bible featuring Genesis 3 ("The Fall") form a backdrop that is both a harbinger and its own commentary.

The film is filled with interviews with the four seminarians it follows, and they seem to be keenly aware of the challenges of becoming a priest in the 21st century. Their reflections about the priestly commitment they are about to make, from practicing how to minister to the sick, to celebrating the Eucharist, and responding to faithful about the clergy abuse crisis, are profound, sincere and appealing.

I asked the directors why they felt the need to include the crisis in the film. Hodge, who is not Catholic and grew up without any religious practice, said that whenever he told someone he was making a film about Catholic priests they asked, 'Are you going to cover the clergy abuse thing?' he told me, adding, "You'd have to be tone deaf not to mention this issue."

Kelly said that now with the revelation about the graves of Indigenous children at former boarding schools, many run by the Catholic Church, the negative things had to be mentioned in what I found to be a complex, inspiring and entertaining film.

"The film is for two audiences," Kelly explained. "My wife is one of the producers on the film and she is Jewish. She kept asking for clarifications, which was a big help. Though we weren't able to explain every detail, like the difference between a diocesan priest who takes vows of celibacy and obedience to his bishop, and a priest like the now Jesuit Father Duarte, who takes vows of poverty, chastity and obedience in a religious congregation, but there is enough there for Catholics and not too much detail that might bog down the non-Catholic viewer."

While I admit I wanted to see more soccer in the film, there is much humanity and grace in "The Holy Game."

"Soccer is a holy game," said Hodge, who gravitates to comedy rather than the overtly spiritual. "And this is a deep dive into seminary life, another holy game, if you will, with rules and structures. We met some humans who were very honest with us and found individuals who will be our friends for life."

*This article has been updated to correct the name of Mike Zimmerman.