Book excerpt from Jesuit Regent Patrick Saint-Jean's 'The Spiritual Work of Racial Justice: A Month of Meditations with Ignatius of Loyola' 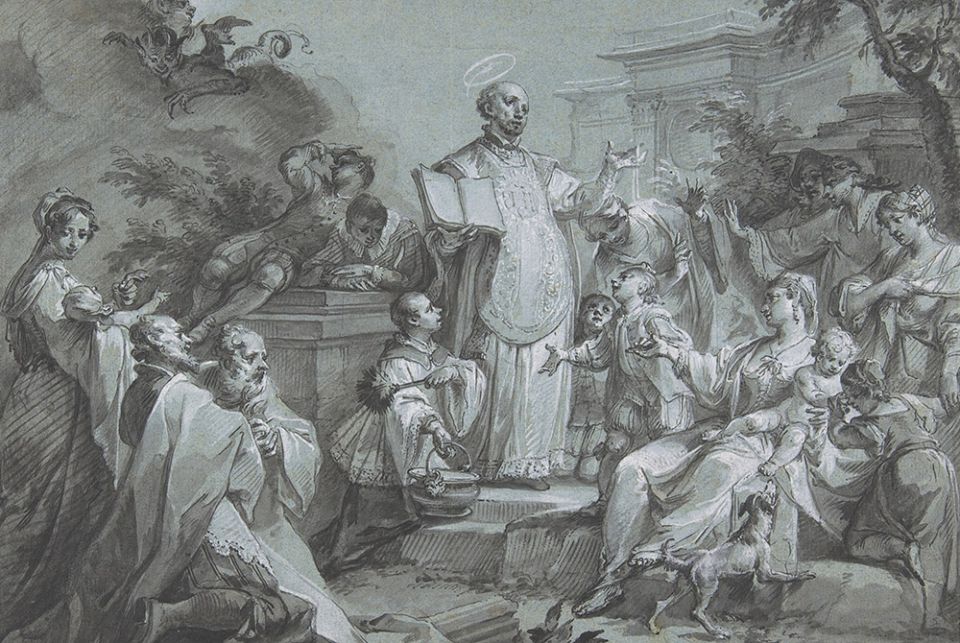 "Saint Ignatius of Loyola Preaching," by Johann Wolfgang Baumgartner, a drawing in ink dated before 1761 (Metropolitan Museum of Art)

Editor's Note: This is excerpted from The Spiritual Work of Racial Justice: A Month of Meditations with Ignatius of Loyola (Anamchara Books, 2021). Used with permission.

When religious historians tell the story of Ignatius of Loyola before his conversion, they usually emphasize his vanity, his devotion to romance and adventure and his military ambition. They often leave out the fact that Ignatius' life was not going all that well for him before his conversion. He was not the happy-go-lucky womanizer he is often pictured as. The cannonball that injured him so badly in 1521 did not shatter an otherwise successful life; instead, it was a final blow to a young man who had already endured much heartache. 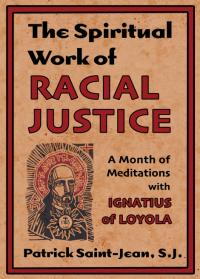 The Spiritual Work of Racial Justice: A Month of Meditations with Ignatius of Loyola
By Patrick Saint-Jean
402 pages; Anamchara Books ; 2021

Ignatius' mother had died when he was only seven; his father died when he was sixteen. One of his older brothers lost his life in battle, while another one went to sea and never returned home. He grew up in a family that observed religious traditions but failed to enforce moral boundary lines. His father was a womanizer who had had several illegitimate children, and his grandfather's behavior was so reckless and immoral that two floors of the family castle were demolished as a punishment from the Crown.

Ignatius grew up both spoiled and lonely. He brawled, getting into serious trouble, but was able to use his privileged position to escape any consequences. His father, before his death, had sent Ignatius to live in the household of one of King Ferdinand's provincial governors, and there Ignatius remained for many years. Like most young men of his class, he had little education beyond learning how to be a good soldier, an accomplished horseman and a gallant courtier. By the time of his injury at the battle at Pamplona, his foster father had fallen from favor with the king. Ignatius was left with only his own vanity to serve as an anchor in life.

After his conversion, however, Ignatius' priorities began to change. He perceived that his own emotions had been "disordered" — in other words, out of balance, unhealthy, pulling him away from his true God-given identity. As soon as he was healed enough to walk, he set off for Jerusalem, seeking the physical geography of Christ even as his heart was searching for a spiritual path. When his travels led him to someone in need, Ignatius gave the man his fancy clothes. Then, in an all-night vigil before the Black Madonna in a church in Montserrat, Ignatius hung up his sword and dagger. With these actions, he demonstrated that he was separating himself from his old priorities. He was allowing his desires and goals to be rearranged — reordered by Christ.

At the beginning of The Spiritual Exercises, Ignatius wrote an ancient prayer called the Anima Christi. The prayer includes these words: “Permit me not to be separated from you.” Ignatius had learned that vanity and self-serving passions had come between him and Christ. They had also come between him and his fellow humans. "Disordered affections" separates us from one another as much as they separate us from the Divine.

Racism is a form of disordered affection, an imbalance in our priorities that puts us out of sync with the Divine Spirit at work in our world. Theologian M. Shawn Copeland wrote, "Racism spoils the spirit and insults the holy; it is idolatry." In other words, it not only makes divisions between human beings, but it also has the power to separate us from God.

Most of us are probably familiar with the first of the Ten Commandments: "Thou shalt have no other god before me." The sin of worshipping another god — otherwise known as idolatry — is a Commandment we often skim over. After all, most of us probably don't prostrate ourselves before a statue or say prayers to Zeus. Rabbi Abraham Joshua Heschel, however, defines an idol as "any god who is mine but not yours, any god concerned with me but not you." When we allow racism to exist within our Christianity, our god is no longer the living, loving Force who sustains the universe. We may think we are devoted to the same God who Jesus called Father, but instead, we are worshipping something lifeless and loveless, an empty god — an idol.

"Racism is a faith," wrote theologian George D. Kelsey, " … a form of idolatry. It is an abortive search for meaning." Kelsey went on to explain that the concept of a "superior race" arose out of the need to justify human selfishness in the form of political and economic power. White people needed to find an excuse for their oppression and exploitation of people of color, and so they came up with a belief system about the very order of being itself, an idea that was totally contrary to the actual tenets of both the Hebrew and Christian scriptures. "The god of racism," said Kelsey, is the white race itself, which has set itself up to be "the ultimate center of value," possessing an inherent right to power that reduces the lives of people of color.

The god of racism now permeates our political, social, medical, and educational institutions. Father Bryan Massingale challenges us to see this force at work even within our churches, where "idolatry lies in the pervasive belief that European aesthetics, music, theology, and persons — only these are standard, normative, universal. … That only these can mediate the divine and carry the holy." He concludes that "idolatry is divinizing what is not God."

Racism makes us see white as "normal." It equates whiteness with being human, the standard against which all people are measured. Theologian Soong-Chan Rah noted that racism enables white people to "construct the world in their own image … set[ting] standards for humanity by which they are bound to succeed and others bound to fail." Centralizing whiteness in this way, says Rah, is an act of idolatry that worships the created instead of the Creator.

"Keep away from anything that separates you from God, anything that might take God's place in your hearts," cautioned the author of First John (5:21). He was underlining the fact that although an "idol" is something external, the force that gives an idol its power lies within our own hearts. Although racism is very real at the systemic level, it is also the external embodiment of our own disordered hearts.

We may think we are immune to its demands, but it nevertheless enforces a reality where some people are worth less than others, a system that perpetuates inequality and suffering. And at the same time, it separates our own hearts from connection with the true God, the God of Love and Life. The work of antiracism requires that we work at both levels: fighting the external social forces while at the same time we rearrange our own internal priorities.

As we begin to see with the Light of Christ, we also begin to perceive what needs to be reordered within our lives. Sooner or later, we find ourselves at the point Ignatius did after his injury, a place of vision and enlightenment where we are challenged to rearrange our inner desires.

This is the purpose of the Spiritual Exercise. As Ignatius said, these exercises are the "means of preparing and disposing your soul to rid itself of all its disordered affections, and then, after their removal, of seeking and finding God's will in the ordering of your life." After Ignatius' conversion, during his long period of prayer in Manresa, he came to understand his spiritual journey as a process of reorientation. He was called to intentionally turn away from his disordered passions — his self-centeredness and his illusions of grandeur — to a new place of humility, a place of openness to God.

Ignatius referred to this place as a state of indifference. By this he didn't mean apathy or lack of interest but rather a detachment from all his fears, false assumptions and selfish desires. In this unencumbered state, he was free to receive God's call to a new life of healthy interaction with others, a life of service and love.

For those of us living in the twenty-first-century world, the work of antiracism is an essential part of our call to detachment from ourselves. It asks us to remove the idol of racism from our lives so that we can connect more intimately with both God and others.

How will you answer this call? Only you can say.

A version of this story appeared in the Nov 12-25, 2021 print issue under the headline: St. Ignatius: Teacher of antiracism .

Your thoughts on the pope and civil unions