An invitation to get past the shallow, well-charted waters of 'wokeness' 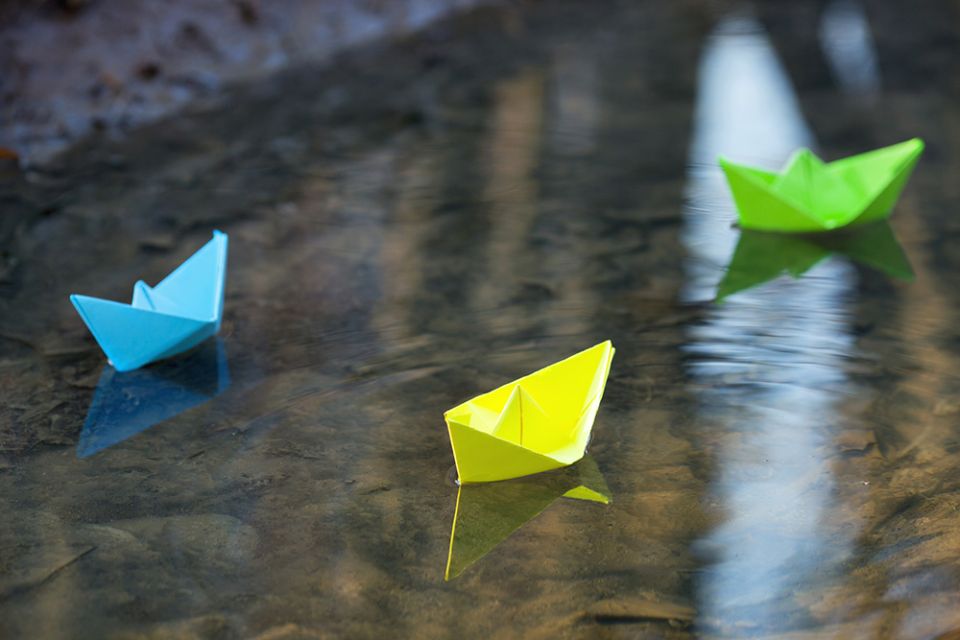 Writer Sam Adler-Bell published an essay criticizing wokeness in New York magazine last week. He might be known to NCR readers as the co-host, with former Commonweal associate editor Matt Sitman, of the podcast "Know Your Enemy." The article is well worth a read. I should like to highlight a few themes in his article, some of the reaction to it, and why Catholics have a specific dog in this intellectual fight.

Adler-Bell set forth a series of caveats, noting that just because many of the critics of wokeness are obnoxious does not mean they are not on to something, and that "the term has been abused and stretched to a point of such ample unintelligibility that its mere appearance, in text or speech, reliably signals that an unclear or tendentious thought is about to be expressed — inducing, in me at least, a slack-jawed irritation that is phenomenologically not unlike having my ears boxed." If at times you watch Fox News, you will know what he means. 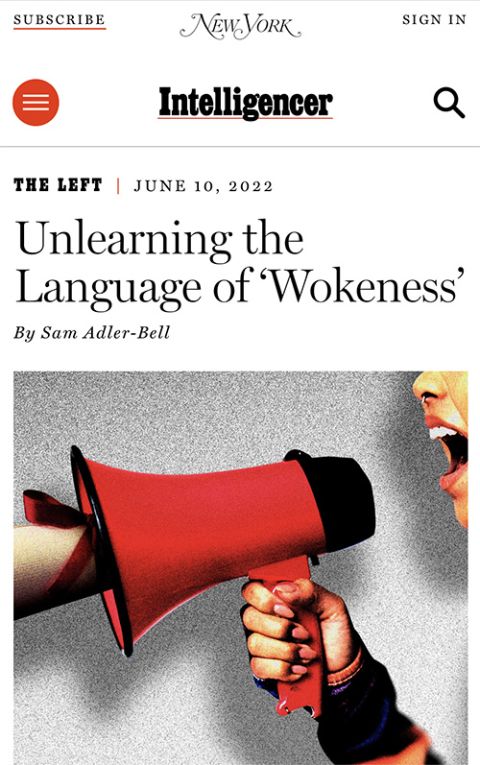 Adler-Bell persists, however, because there is a problem with wokeness, a specifically political problem that transcends whether or not its ideas work at the polls. He offers this definition of wokeness: "Wokeness refers to the invocation of unintuitive and morally burdensome political norms and ideas in a manner which suggests they are self-evident." He observes:

This idiom — or perhaps communicative register — replaces the obligation of persuading others to adopt our values with the satisfaction of signaling our allegiance and literacy to those who already agree. In some cases, this means we speak in an insular language that alienates those who haven't stewed in the same activist cultural milieu. At other times, it means we express fealty to a novel or unintuitive norm, while suggesting that anyone who doesn't already agree with it is a bad person.

Allowing that if you do not like the term, you can choose another, Adler-Bell nonetheless insists on the point that anyone who has moved in progressive circles in recent years knows exactly what he is talking about.

I would add another caveat: At a time when many on the right wink at usurping the constitutional prerogatives of the citizenry to elect their own leaders, or apologize for thugs planning to perpetrate violence at a gay pride celebration in Idaho, should we be worried overmuch about what a few cranky professors think? Alas, we can multitask and we must multitask.

The most important part of Adler-Bell's argument is his conclusion that the wokeness he describes is anathema to progressive politics because it lacks any passion for persuasion. "The underlying logic of any leftist movement worthy of the name is the logic of solidarity — the idea that we have obligations to each other, as well as power, by dint of our entangled fortunes. ... It requires us to take what Vivian Gornick once called 'the incomparable risk of shared existence.' Solidarity is beautiful, in this way, but it is not self-evident" (emphasis in original).

And, later, "Solidarity requires an invitation, a warm and friendly offer to collude in a risky proposition. It doesn't work as a sanctimonious entreaty to identify with an existing set of self-evident values."

The reactions to Adler-Bell's piece more or less proved his point. Writer Dan Berger managed a long twitter thread that never really engaged the arguments, and some of those commenting on Berger's thread were worse. There was also this thread by Steven Thrasher, a journalism professor at Northwestern University. Both writers exhibited the very thing Adler-Bell warned about, presenting as self-evident that which is not self-evident.

Why does any of this matter to Catholics? The ideas that animate the woke ideological culture, and which Adler-Bell describes so well, are rooted in deconstructionism, the idea that one needs to deconstruct those texts and symbols by which a culture defines itself, and attend to the power relations behind them. There is obviously something to this. But not everything. Our Catholic universities, too, have learned how to pass on the craft of deconstructing culture, but who is working on the more arduous task, that of creating culture?

Deconstructionism as an intellectual habit of mind is often intertwined with ideas about group identity, and the result is that values to which we all should aspire, like inclusion and diversity, become ideologies. Slogans replace argument and "allyship" replaces actual engagement.

What Adler-Bell writes can be applied to many Catholic liberal arts schools: "The victories of student activists in the 1970s onward — in creating departments and new curricula through which radical thought could be studied and taught — were pyrrhic. Conceived as beachheads in a broader war against capitalist society, radical departments became sepulchers for radical thought: places where wild ideas could be quarantined from the challenge of convincing anyone outside to believe them."

What Adler-Bell rightly calls a "clerisy" functions as a high priesthood of the academy, and there is nothing liberal about it.

There is also something profoundly un-Catholic about it, and it has to do with this idea of solidarity. At the conference of bishops and theologians in which I participated in March, the smartest thing said came from one of the bishops. "We live in a culture of grievance," he said, "but we possess a theology of grace and gratitude. How we build a bridge from one to the other is a prerequisite for evangelization." Bingo.

To be sure, there are many people in America today who have good reasons to feel aggrieved! People with degrees and endowed chairs at elite universities, however, are not usually among them. Nor does the clerisy promise any real path toward ameliorating the sources of aggrievement — no intellectual path and no political path.

After two generations of deconstructionism dominating the intellectual life of our cultural leaders, why are we surprised that our culture is so polarized?

The Compendium of the Social Doctrine of the Church is abundantly clear about the source of solidarity. There we read:

The unsurpassed apex of the perspective indicated here is the life of Jesus of Nazareth, the New Man, who is one with humanity even to the point of "death on a cross" (Phil 2:8). In him it is always possible to recognize the living sign of that measureless and transcendent love of God-with-us, who takes on the infirmities of his people, walks with them, saves them and makes them one. In him and thanks to him, life in society too, despite all its contradictions and ambiguities, can be rediscovered as a place of life and hope, in that it is a sign of grace that is continuously offered to all and because it is an invitation to ever higher and more involved forms of sharing.

Jesus of Nazareth makes the connection between solidarity and charity shine brightly before all, illuminating the entire meaning of this connection: "In the light of faith, solidarity seeks to go beyond itself, to take on the specifically Christian dimensions of total gratuity, forgiveness and reconciliation. One's neighbor is then not only a human being with his or her own rights and a fundamental equality with everyone else, but becomes the living image of God the Father, redeemed by the blood of Jesus Christ and placed under the permanent action of the Holy Spirit. One's neighbor must therefore be loved, even if an enemy, with the same love with which the Lord loves him or her; and for that person's sake one must be ready for sacrifice, even the ultimate one: to lay down one's life for the brethren (cf. 1 Jn 3:16)."

This vision of solidarity rooted in grace and gratitude, issuing in hope echoes the "incomparable risk of shared existence" spoken of by Gornick and cited by Adler-Bell.

That "incomparable risk of shared existence" is also kin to Pope Francis' calls for a culture of encounter, something all high priesthoods abhor. In the Catholic hierarchy, that high priesthood consists of those who pine for pre-conciliar times they mistakenly think were without any challenge or multiformity. In the contemporary Catholic academy, the high priesthood consists of the woke professoriate and its allies. Both resist genuine encounter, substituting it with formulaic ideological constructs.

The easiest way to spot when a moral value has morphed into an ideological construct is when the value becomes imperialistic, when one insight is taken to explain a host of phenomena. A genuine concern for, say, the challenges faced by transgender youth becomes what a friend discovered when she helped her son apply to college, an application form in which the drop-down box for gender lists 32 options. That is not inclusive. That is not even helpful. That is performance.

Francis appeals to people precisely because he never appears to be performing. He never rushes to force people into boxes. He encounters them.

All these deep philosophic issues get way above my paygrade very quickly and I hope that there are serious theologians and other thinkers out there who are willing to swim against the tide, to put out into the deep waters of intellectual life, past the shallower, well-charted waters of deconstructionism.

After two generations of deconstructionism dominating the intellectual life of our cultural leaders, why are we surprised that our culture is so polarized? Wokeness is, God willing, its dying gasp. Adler-Bell should be invited to deliver the eulogy.

Opinion | An invitation to get past the shallow, well-charted waters of 'wokeness'