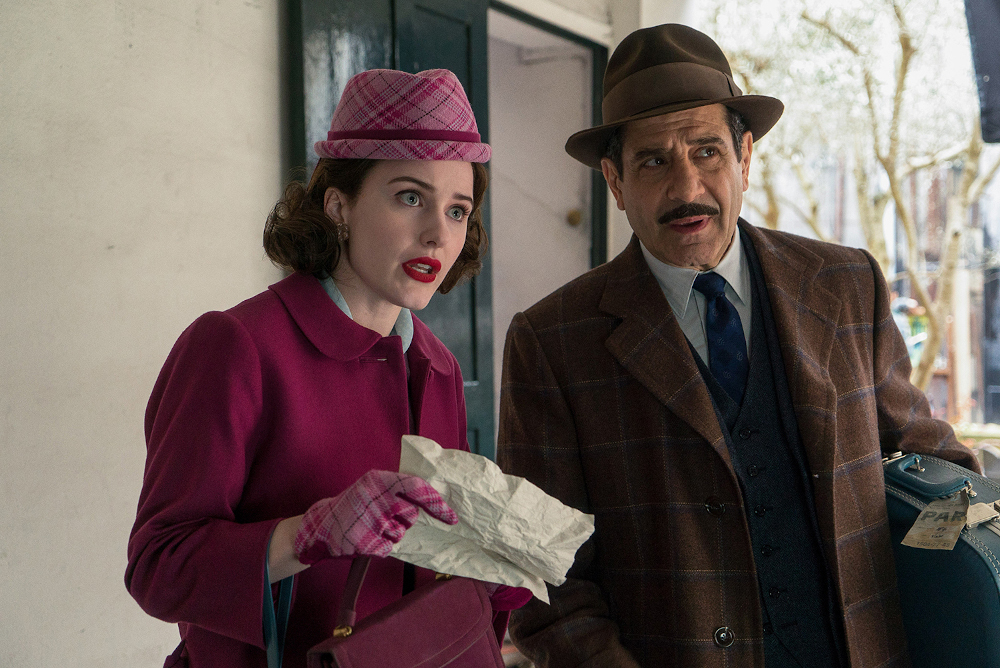 That was a colleague's terse review of the new season of Amazon Prime's "The Marvelous Mrs. Maisel."

I understand what he means. So far, the new season is a little light on plot and seems to be relying a bit too much on making a period fashion statement.

It will take more than that to push me away from Midge. I still love the show and greatly admire the acting skills of the entire cast, especially Rachel Brosnahan as Miriam and Tony Shalhoub as her father, Abe Weissman. I am over the whole controversy about whether or not gentiles should be "allowed" to play Jewish roles. As I have said before, it is called "acting."

I have a sudden affection for Moishe and Shirley Maisel, Midge's ex in-laws. Especially Shirley, played by Caroline Aaron. Why do I imagine that I know her?

(Probably because I do.)

Let's talk about the highlights of the new season thus far — which have been at the very least, religious, and at their best, "Jewy."

There are few mourners at his funeral, and so Susie moves his portrait to another room in the funeral home — one with a larger crowd of mourners.

There, she opens her mouth and her soul.

I never knew him … I never knew that he won a medal in the war … Jackie met Babe Ruth … this guy lived a life, and I never knew any of this. I had a close friend, and I never knew it! How is it that a decent guy, a guy who worked his ass off, how is it that he could barely afford to sublet a corner of my s-hole apartment? He never caught a break. How f—ed up is that?!? And all these f-ing horrible a-holes in the world that just get s— handed to them. This guy fought in a war! He traveled! He won a Lindy contest! I didn't know Jackie could dance. A man who deserved something and he wound up sprinkling saw dust on the vomit on the floor of the Gaslight. I cannot stand by and watch this happen to another poor slob, so I am dedicating the rest of my miserable f-ing life to finding the Jackies of the world. The ones you walk by, the ones you don't see, the ones who never get a break, and I am going to make sure that they never end up in my f-ing apartment! 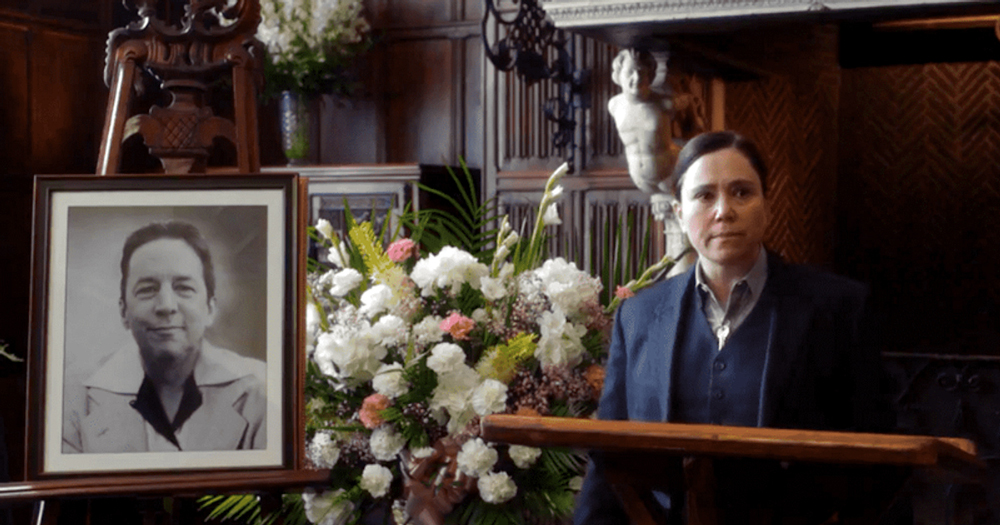 I wonder if the writers know to what extent Susie was channeling the words of one of the Jewish people's great literary figures, Hayyim Nachman Bialik (who was born in Ukraine).

In one of his greatest poems, he muses:

May my portion be among you, you meek of the world, you speechless of soul,
who embroidered your lives in secret, retiring in word and deed,
hidden dreamers, small of speech, but great in glory …
You had no place in the ranks of the prophets, no place in ornate chambers,
solitary, your footsteps died away, leaving no echo, no trace.
But your life — that was your prophecy, and your very being was your glory,
you are the faithful guardians of the image of God in the world!

As a rabbi, I have uttered these words at many funerals — funerals attended by less than a minyan, mourning someone whom they barely knew. In each case, I prayed that the deceased had performed many secret acts of goodness, that his or her life was a drama out of a Hasidic story.

So, I sense what was going through Susie's mind and soul as she stood up to speak at that funeral home. It was nothing less than a solemn commitment to redeem the unknown from the corners of the world. 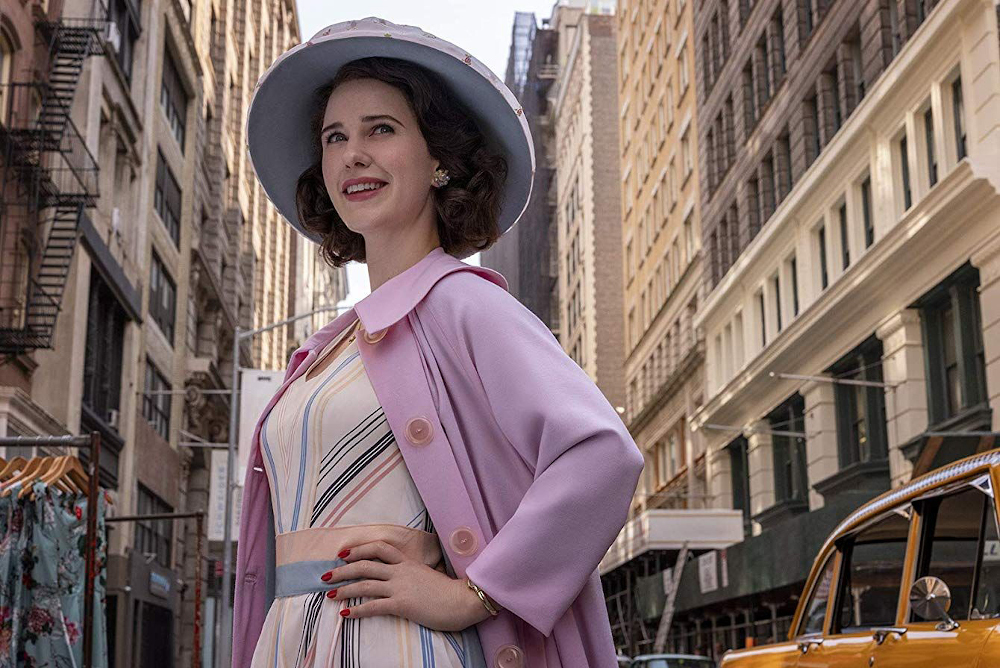 Second: There is the scene (Season Four, Episode 3, minute 40:00) in synagogue when the Weissmans are unexpectedly invited to the bar mitzvah ceremony of a kid whom they do not know. During the ceremony, there is a cacophony of protests, as the rabbi and others rise up to condemn Abe for giving Buzz Goldberg's play a bad review in the Village Voice. "We escaped the jaws of Hitler — for this?" asks the rabbi.

Because, whether or not the writers knew it, that entire scene — a public protest during the Torah reading — comes straight out of Jewish tradition.

It is the practice of ikkuv ha-keri'ah, delaying the reading of the Torah …

to seek redress of a wrong, mainly a judicial or moral one. This practice was prevalent mainly in the Middle Ages among Ashkenazi Jewry. The custom of interrupting public religious services was a form of protest and way of arousing public indignation afforded to an individual who felt that an injustice had been perpetrated upon him or her by the constituted authorities or by rich and violent individuals. … This privilege was extended to the aggrieved in Eastern Europe also, including cases of complaints against the kahal itself. In Russia, after the conscription law of 1827, many a poor mother availed herself of the opportunity to prohibit further prayer until she had stated her protest over the cruel drafting of her male child into the Russian army.

When there is (perceived) injustice in the community, the decrying of that injustice takes precedence, even over the reading of the Torah. Because, in some way, that act of protest is a form of Torah itself.

Whether or not the writers knew it, that entire scene — a public protest during the Torah reading — comes straight out of Jewish tradition.

Finally: There was that moment in Episode 3 (minute 42:00) when comedian Lenny Bruce — a man who was the "zeyde" of so many contemporary comedians — encounters Midge backstage.

He tells her about being a student at Mepham High School in Bellmore, Long Island, and taking a speech class and having to give an impromptu speech. People, including the teacher, throw erasers and chalk at him.

Afterwards, he asks the teacher what was going on.

To which he replies: "Everything is Bellmore."

Having grown up 15 minutes north of Bellmore, I can relate to the words of the late, lamented comedian.

Yes, in life, we are constantly confronting those people who will throw metaphorical chalk and erasers at us. You never really outgrow that.