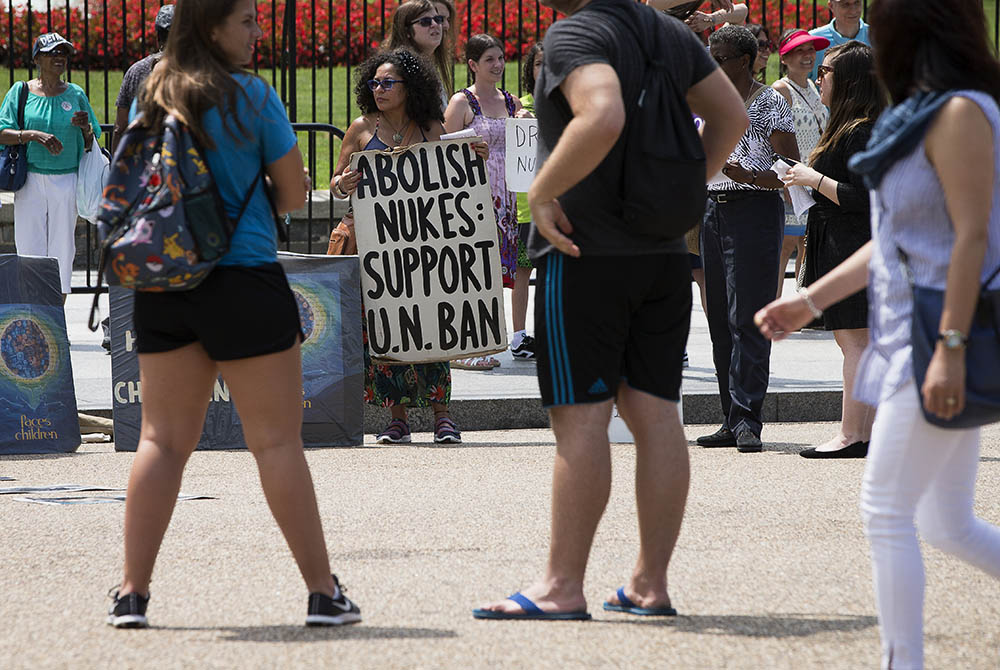 Peace activists hold a Catholic prayer service of repentance near the White House Aug. 9, 2018, for the use of nuclear weapons on Japan in 1945 during World War II. (CNS/Tyler Orsburn)

We live in the shadow of a nuclear threat. Studies show that a limited nuclear war between India and Pakistan could result in 1 billion lives lost. A nuclear war between Russia and the United States would be catastrophic for humanity. What are the nations of the world doing about it? What should we as church be doing?

The Treaty on the Non-Proliferation of Nuclear Weapons entered into force in 1970. It is the mainstay of global nonproliferation and disarmament efforts. Every five years, the vast majority of the world's nations gather for a review conference. The 2020 review conference has been postponed twice due to COVID-19. The postponement to 2022 may be a blessing, as it gives the nuclear powers more time to make progress.

The last review conference in 2015 did not go well. The 191 states party to the treaty were unable to reach consensus on a final document. This failure was not a good sign. The grand bargain of the treaty is that nations without nuclear weapons agree not to acquire them and the nations with nuclear weapons commit to disarmament.

The treaty requires non-nuclear-weapons nations to enter into safeguard agreements with the International Atomic Energy Agency. Agency protocols help ensure that a nation's non-proliferation commitments are being met. Unfortunately, there is no similar global mechanism to hold the nuclear powers accountable for nuclear disarmament. 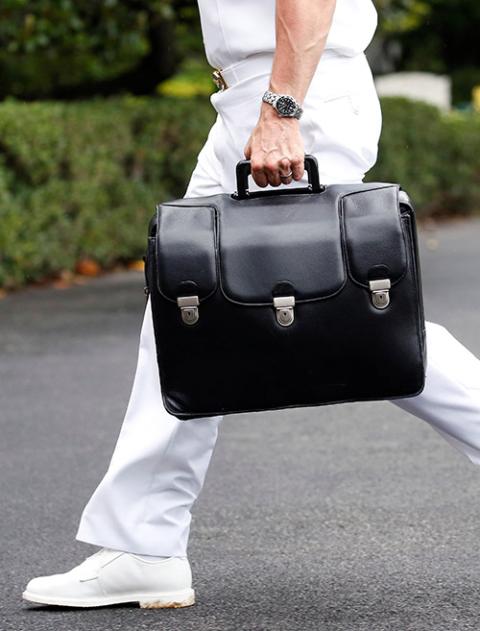 Article VI of the non-proliferation treaty commits the nuclear weapons states to "negotiations in good faith" to achieve nuclear disarmament. The United States and Russia have negotiated reductions in their arsenals, the latest being the 2010 New START Treaty. The two nations still possess over 90% of the world's nuclear weapons. New START capped deployed nuclear warheads at 1,550 each, more than enough to destroy human civilization.

The United States and Russia have not initiated negotiations on further reductions. Further cuts by the two nuclear superpowers are a natural precondition before other nuclear weapons states are likely to agree to multilateral reductions with a goal of "complete disarmament under strict and effective international control," as envisioned by the non-proliferation treaty.

Given the actions and inactions of the five nuclear powers that are party to the non-proliferation treaty, is it any wonder that it is difficult for the nations of the world to trust their commitments to disarm? Although the proposal for creating a Nuclear-Weapon-Free Zone in the Middle East contributed significantly to the failure to reach consensus in 2015, the lack of progress on nuclear disarmament was clearly a major factor.

In 2017, the frustrations of non-nuclear-weapons nations led to a vote by the U.N. General Assembly to "negotiate a legally binding instrument to prohibit nuclear weapons." With impetus from the international conferences on the humanitarian impact of nuclear weapons, the Treaty on the Prohibition of Nuclear Weapons entered into force earlier this year. Predictably, none of the nuclear weapons states support the nuclear ban treaty.

In 1963, Pope John XXIII called for nuclear weapons to be "banned" and for "a suitable disarmament program" (Pacem in Terris).

In 2006, Pope Benedict XVI asserted, "In a nuclear war there would be no victors, only victims." Benedict urged "progressive and concerted nuclear disarmament."

Pope Francis has taken the church's strategy a step further. Francis has sought to morally delegitimize the possession of nuclear weapons. This process had begun under Benedict, who called the notion of nuclear deterrence ensuring security both "baneful" and "completely fallacious."

On his visit to Hiroshima, Japan, in 2019, Francis reiterated: "The use of atomic energy for purposes of war is immoral, just as the possessing of nuclear weapons is immoral." The Holy See was among the first nations to sign the nuclear ban treaty, labeling such weapons legally illegitimate.

As it delegitimizes nuclear weapons, the Holy See also promotes step-by-step policies to reduce the nuclear threat. At a U.N. Conference on Disarmament in February 2021, the Holy See argued that the Treaty on the Prohibition of Nuclear Weapons and the Treaty on the Non-Proliferation of Nuclear Weapons are "inspired and driven by the very same moral imperatives and objectives" and "complement each other."

In the wake of the Holy Father's visit to Hiroshima and Nagasaki, the U.S. bishops' Committee on International Justice and Peace quoted Francis on the immorality of possession and called for our nation to exercise its "primary responsibility" in working with other nuclear powers for disarmament. They lifted up the importance of the non-proliferation treaty as an "effective instrument to bring about the elimination of all nuclear weapons."

In 2020, on the 75th anniversary of the bombings of Hiroshima and Nagasaki, both Los Angeles Archbishop José Gomez, the president of the U.S. Conference of Catholic Bishops, and the Committee on International Justice and Peace issued statements urging nuclear disarmament. 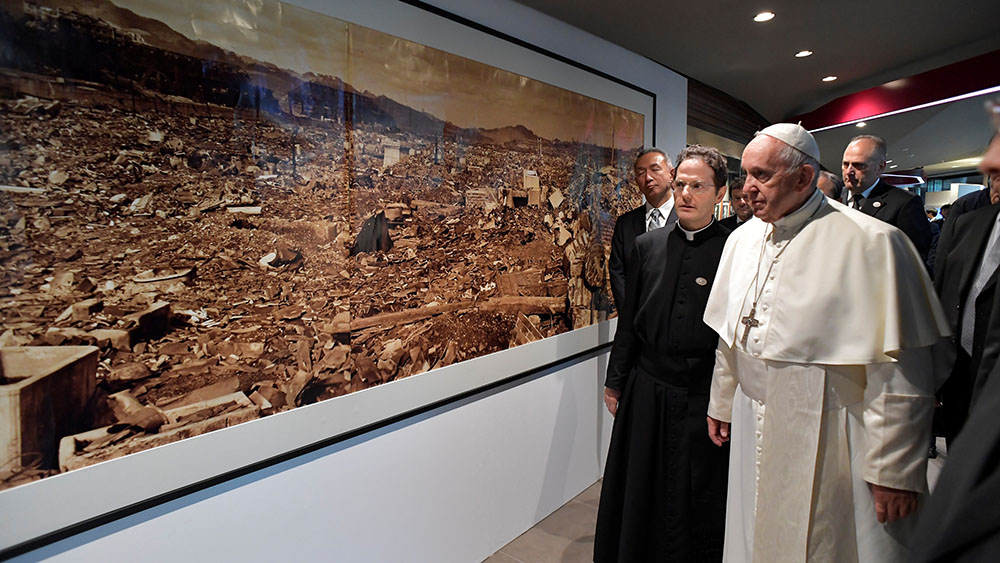 Pope Francis walks by a photo showing the destruction of an atomic bomb during a visit to the Jesuit-run Sophia University in Tokyo Nov. 26, 2019. (CNS/Vatican Media via Reuters)

In a recent letter, the chairman of the bishops' committee called the failure of the 2015 review conference for the non-proliferation treaty "troubling" and raised questions about the commitment of Russia and the United States to a "cessation of the nuclear arms race."

In May 2021, a group of seven scientists and seven Catholic leaders, including three bishops, issued a statement in which they urged President Joe Biden to "work for a successful conclusion" of the review conference, "with nuclear states honoring their disarmament obligations."

The statement spelled out a number of steps that the administration could take, including affirming the Treaty on the Prohibition of Nuclear Weapons as "complementary to existing agreements, including the Nuclear Non-Proliferation Treaty."

Cardinal Blase Cupich penned a June 2021 column in "The Hill" with the poignant title "We must end the nuclear threat before it ends us."

The U.S. could reduce the role of nuclear weapons in our defense strategy, adopt a "no first use" policy, and take weapons off "launch on warning" status to reduce risks. The administration could limit modernization efforts to improving safety while initiating talks on further cuts with Russia.

The president could also use the time left before the non-proliferation review conference in early 2022 to reaffirm the goal of a world without nuclear weapons and concrete steps to achieve it.

What more can the church do to encourage a successful review conference?

The Holy See and the U.S. bishops' conference can continue to speak out, as I expect they will. More individual bishops could raise the issue in talks and columns. Individual Catholics and Catholic organizations could raise their voices in the public square and with legislators, as Pax Christi and numerous religious communities of men and women have done.

The delay gives us time to help create a climate in which our nation can work, in the words of Cupich, to "eliminate the nuclear threat before it eliminates us."