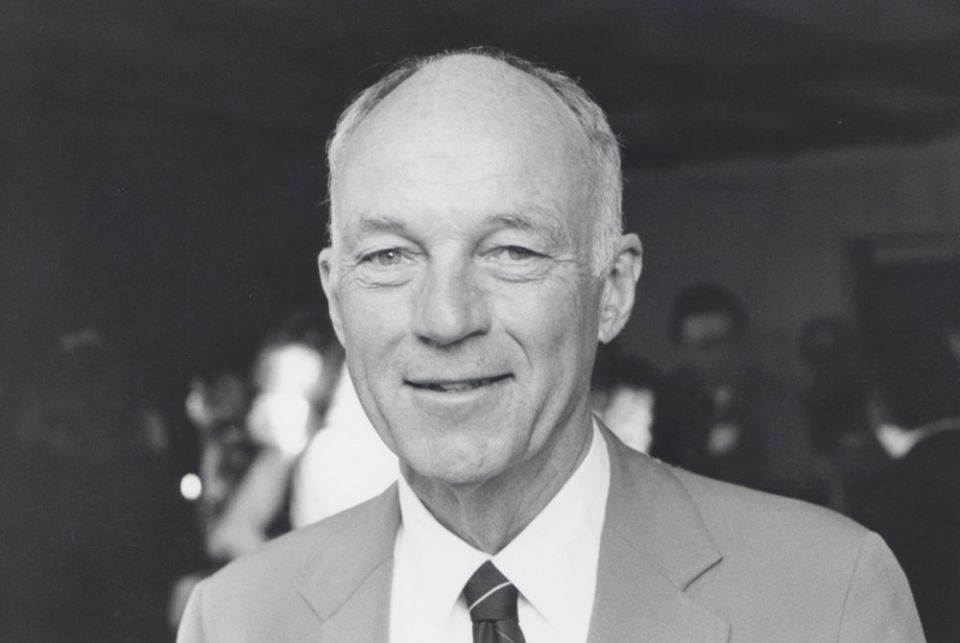 John Caron, Catholic lay activist, businessman, ethicist, and former NCR board chair, died Jan. 15 in a Greenwich, Connecticut, hospital, his wife, Ann, son Mark, and daughter-in-law, Lisa, at his side. Caron was 95. 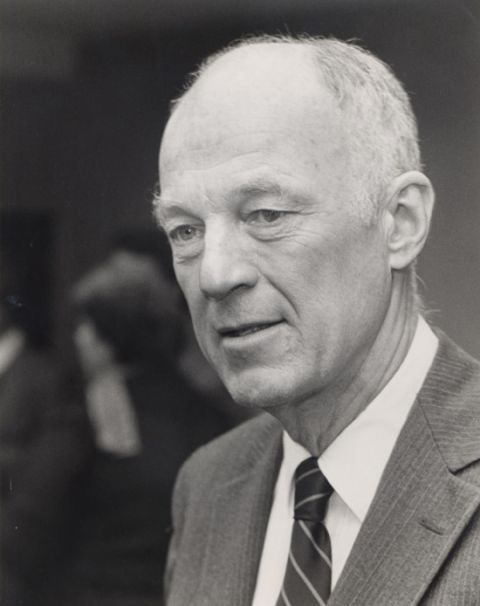 John Caron, pictured at an NCR Board of Directors dinner at the Crystal City Mariott, March 3, 1986, in Alexandria, Virginia (NCR file photo/Rick Reinhard)

He once wrote: "I want people to know how I loved and served my church."

"John's the NCR board Republican," Arthur Jones once quipped in 1980 as I took over the NCR editorship from him. True or not, it seemed right to Jones and he spoke with admiration for his longtime NCR colleague, recognizing Caron's special mix of social justice and business acumens. These helped chart NCR over decades and through some difficult times.

Caron's life was shaped by his early childhood memories of his own father, born in French-speaking Canada and who had grown up poor among textile mill workers. "My father himself had been poor. It had an effect on him; it was never going to happen to him or his family."

John Caron's father bought a mill 80 miles west of Chicago and started a business that he passed on to John, who would eventually grow the company into Caron International, a $100 million annual sales multinational yarn and textile company.

Caron was the longest serving NCR board chair in the company's 56-year history. He held that position from 1977 to 1990, before the board adopted term limits. In his capacity as board chair, Caron steered a steady course. His commitments to justice, human dignity and to NCR's mission of independent Catholic journalism were essential in shaping the company, especially in its early years.

Caron had a firm resolve but gentle demeanor. His deep, gravelly voice drew attention when he spoke. His utterances were measured. His moderating ways quelled dissonance, drawing people together.  Temperamentally, he was not prone to risk.  "Mutual funds, Tom," he told me more than once. "You can't beat the market."

NCR, as an independent, lay Catholic voice in a clergy dominated church, was a precarious idea from the outset. The certainty of its success was never assured. It took leadership, belief in the mission, business acumen, and determination to make it work. These were the very qualities Caron provided.

"John always had a very curious mind, a great sense of history, a vital interest in good government and open to new adventures," remarked Pat Waide, who later succeeded Caron as NCR board chair.

Caron graduated from the University of Notre Dame and became a Notre Dame trustee in 1972.  He taught a business ethics course at the university and chaired the Academic and Faculty Affairs committee and a program founded in 1978 by Fr. Theodore Hesburgh aimed at helping multinational companies respond to the needs of the poor.

While he headed Caron International, he seemed most proud of the voluntary work he did, including work with TechnoServe, a nonprofit organization that promotes business solutions and teaches management skills in impoverished nations. Caron became its board chair. Today, TechnoServe is involved in 29 developing countries.

Caron was active in a number of Catholic organizations: In addition to his work at NCR, he served on the board of the Mexican-American Cultural Center in San Antonio and was chairman of the board of the Woodstock Business Conference, part of the Woodstock Theological Center at Georgetown University. He was chairman of the building committee at his church, St. Michael's, in Greenwich.

Asked once, apart from family and church, what most formed his Catholic attitude, Caron responded it had been CFM, the Christian Family Movement. Caron's sister, Patty, and her husband, Pat Crowley, founded the organization in the mid-1960s. CFM lists a three-fold mission: to promote Christ-centered marriage and family life; to help individuals and their families to live the Christian faith in everyday life, and to improve society through actions of love, service, education and example.

"When we got married, the CFM approach to'observe, judge and act,' had an effect on us. You had to do something. They had five or six programs, on family, on the economy, on international relations. That was the real awakening, because when I was in college, I was an engineer. And engineers are supposed to study calculus," Caron said.

For the past 40 years he enjoyed a monthly Great Books discussion at the Greenwich library. He also loved the outdoors, family camping and canoe trips.

Caron and his wife, Ann, have six children and ten grandchildren, and have lived in a modernistic house they built in the 1960s in Greenwich, Connecticut, when Caron moved Caron International headquarters from suburban Chicago to New York.

The funeral will be on Saturday, Jan. 25, at 10:30 am at St. Michael the Archangel Church on North St. in Greenwich, Connecticut. The family asks that in lieu of flowers donations be sent to Justice in Motion, an organization founded by John and Ann Caron's daughter, Cathleen, in 2005 and dedicated to protecting migrant rights across borders.

[Thomas C. Fox is CEO/President of NCR. His email address is tfox@ncronline.org.]