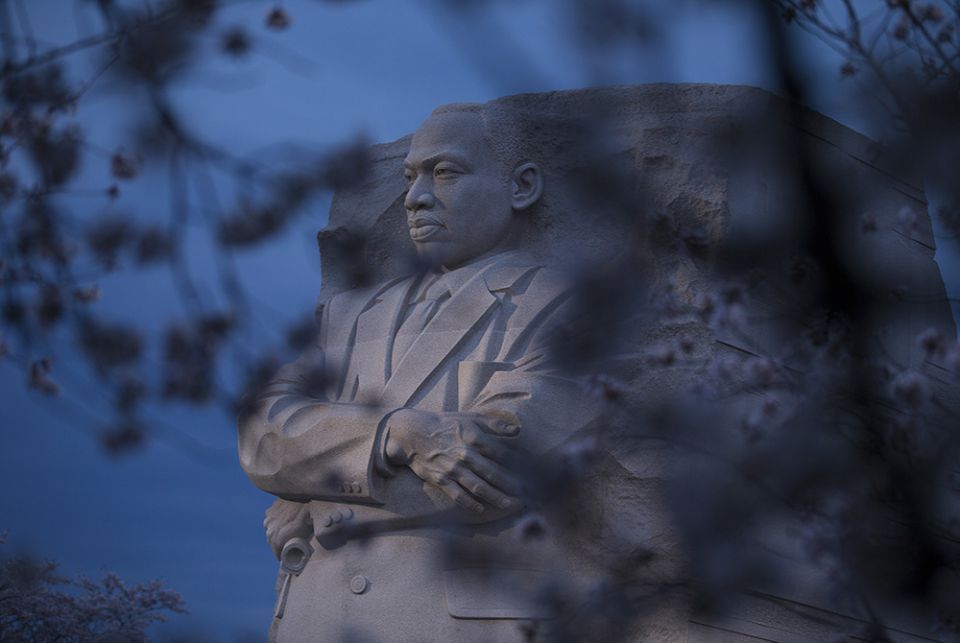 The Martin Luther King Jr. Memorial in Washington is seen at dawn April 4. The day marked the 50th anniversary of the assassination of the civil rights leader in Memphis, Tennessee. (CNS/Tyler Orsburn)

In 1958 when I came to America for a year, I was a white kid from a white country. I was 22, here to visit my pen pal. We’d corresponded on a monthly basis for 10 years. It was a treat to visit America. At first.

My pen pal was an architecture student at Pratt Institute in Brooklyn, and lived in Clinton Hill Apartments with two other students. He put an extra bed in his room, so Brooklyn was where I landed, so to speak.

"Bed-Stuy" was then as bad as it gets — a ghetto created out of a racism I'd not met, with a bigotry so prevalent, so incidental, so accepted in so many quarters, it appeared to me as if racism were almost omnipresent.

I was seared — a scarring of my soul never erased. And in the some 60 years since, I at times explored that deep and bitter racism's toll. Not least in the Catholic Church.

Fifty-seven years later the ranks are thin now of those who marched on Washington on Aug. 28, 1963, and heard in person that great and lasting "I have a dream" speech, and thrilled in company with more than 200,000 others at what was seen as a moment of significant national awakening.

Thin ranks, too, of those who met and interviewed Dr. Martin Luther King Jr. I did at the 1964 Democratic National Convention during the battle to seat the Mississippi Freedom Democratic Party members as delegates. I don't say this from pride, but tearful sadness.

Consequently, this year, as Martin Luther King Jr. Day approaches, I have the audacity to rerun excerpts of two stories from my past, as they appeared in the Catholic Star Herald of the Camden, New Jersey, Diocese. The what was then versus the what now (reprinted with permission).

From that year, one example suffices. For it was the first time I had seen hate on someone's face.

I was working the night shift on a newspaper. One night, four or five colleagues — our night shift ended around 3 a.m., took me to a shebeen — an illegal, out-of-hours drinking joint, in Harlem. The hostess, Maggie Maxwell, was African-American.

As a younger man I had been raised that when being introduced to an older woman, to shake her hand and kiss her right cheek. This I did when introduced to Ms. Maxwell.

Out of the corner of my eye I saw on one colleague's face a look of loathing and disgust so all-consuming of his persona it was frightening. And deeply saddening. Sixty-plus years later I can still see it. (Sixty-plus years later, it seems to have been resurrected by others.)

I took these memories back to England with me. England was on the threshold of welcoming Caribbean former colonists. At that point, the English would prove themselves quick to catch up on racist bigotry.

However, when I returned the America in the '60s, before England’s first wave of soon-to-be ex-colonial people of color began to arrive, it was to newspapering, on a Gannett newspaper in Plainfield, New Jersey.

A Baltimore Sun friend, Jack Gill, who joined the Plainfield paper, at some point, told me I should go to see a "Sicilian socialist priest in Camden who's attempting to do the type of journalism you’re always talking about." I hesitated. A Catholic newspaper? Seemed like a step down. Jack persisted.

Finally, I yielded. My wife and I drove down to Camden to meet Fr. Salvatore Adamo. It was a meeting of the minds.

"Do not use my name," he asked, "because I am not important. Use the names of Walter Reuther (president of the United Automobile Workers) and Dr. King. Repeat what they said. Perhaps people will take heed."

For me the aftermath to the march was barely weeks later, a Northern white-on-black racial protest. A black couple, the Bakers, bought a house in Folcroft, Pennsylvania, a Philadelphia suburb. It was a white, working-class, heavily Catholic enclave.

For three nights the protests and shouting of the surrounded house persisted. Philadelphia Cardinal John Krol did nothing. The sole priest to kneel in prayer in the shadows of the night was a Holy Ghost (Spiritan) father. Finally, the Bakers were driven out.

To recover they were welcomed into a Philadelphia-area white couple’s home where they remained for quite some weeks.

An attempt at a copycat protest in Hammonton, New Jersey, where the home bought by a black couple who had not yet moved-in, was daubed and damaged, was quickly squashed as state and local organizations, and some neighbors, joined together to lower the temperature. That couple did move in. 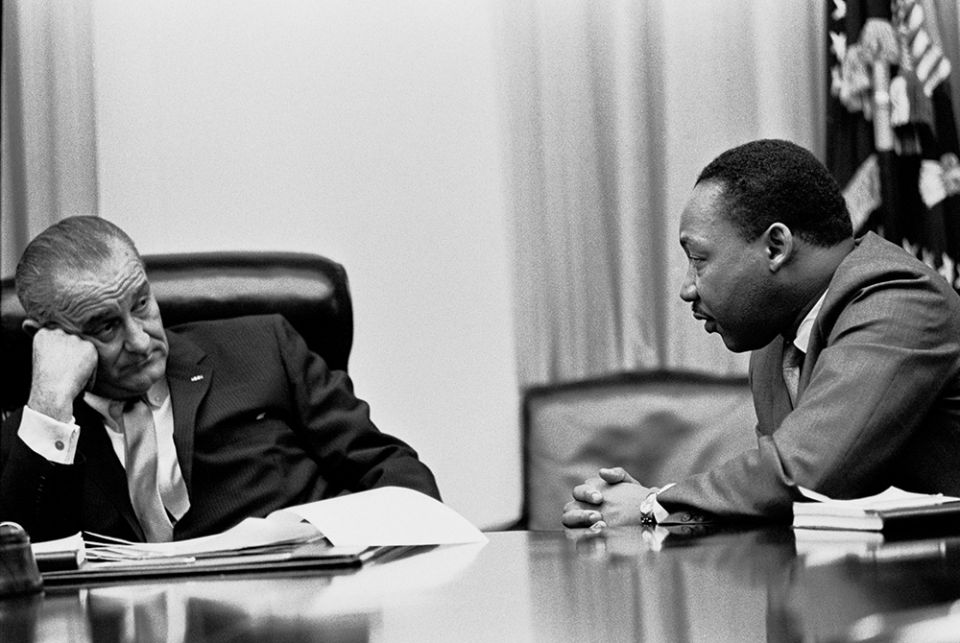 This day when the keywords among the people were "equality" and "courtesy," a young Negro miss — a member of the Paterson, N.J. Retail, Wholesale and Department Store Union — could turn with tears in her eyes to a group of white Protestant, Catholic and Jewish clergymen, and say, "God Bless you, reverends, and thank you." And see tears in the eyes of the persons to whom she spoke. …

Even the arch-enemy of the American Negro, George Lincoln Rockwell of the American Nazi Party, paid a begrudging compliment. Disgusted because only 22 white, segregationist Nazis had rallied to his call for a counter-demonstration, Rockwell said: "I am ashamed of my race. Even the Negroes turn out for the things they believe in." ...

This day when (Ray Ariatti) an old (white) gentleman a thousand or more miles from home (with) a huge banner that announced he was from the Institute of Industrial Relations, Loyola University, New Orleans, filled with joyful sadness, (said), "I am a one-man contingent here in the spirit of Fr. Louis Twomey, S.J. who is unable to attend, and as the representative of all those people from the South who wanted to come but could not."

In Atlantic City, a year later:

A couple of hundred Americans, most of them too young to vote, stole the show at the Democratic National Convention. They didn’t do much, and by their inaction, did a lot. These young students from all over the United States were a constant reminder to each delegate as he entered and left the convention hall that this gathering was one more skirmish in the continuing civil rights battle.

The presence of these members of SNCC (Student Non-violent Coordinating Committee), straight from voter registration work in Mississippi, told the story of the Democratic Party gathering — the question of whether to seat or not delegates from the Mississippi Freedom Democratic Party (MFDP).

This was just one more courageous step in a brave summer.

Those Negroes in the little Mississippi towns where many of the students have spent the last two months trying to persuade them to register, can see the same kids trying just as hard up north. While the Negro Mississippian may have been too scared to "go down town and sign my name," he did meet someone, if briefly, who cared. …

I talked to Dr. Martin Luther King, president of the Southern Christian Leadership Conference, whom I'd not previously met, and Roy Wilkins, executive secretary of the NAACP, whom I had.

At the March on Washington and on television, King's rhetoric was usually fairly high-pitched. What I was unprepared for as we discussed the seating of the MFDP delegates, was his youthfulness and the softness of his tone, the unexpected gentleness of a seasoned campaigner who been in the forefront of physical confrontation.

When we were talking, the credentials committee decision had not yet been announced. King stated that only by seating the MFDP delegates could the convention proceed, for the MFDP argument was sound: the MFDP had followed Democratic Party procedures, the segregationists had not. The segregationist delegates had barred blacks from voting in primaries and participating in party caucuses.

The MFDP delegates were seated.

I wrote in August 1963, "People in Washington, under the penetrating gaze of the enshrined Emancipator, could not help but take heed."

Oh yes they could. Fifty-seven years later the gains are being erased.

That is my story this Martin Luther King Jr. Day.