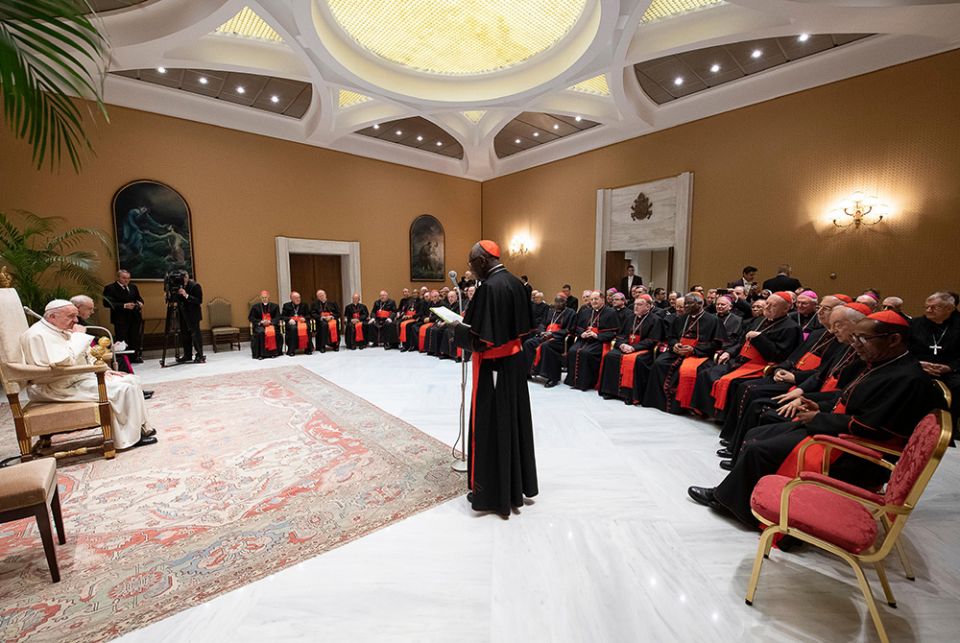 Cardinal Robert Sarah, prefect of the Congregation for Divine Worship and the Sacraments, speaks to Pope Francis during an audience with congregation members, who were holding their plenary assembly at the Vatican Feb. 14, 2019. (CNS/Vatican Media)

The movie is better than the book.

Netflix's "The Two Popes" is a feel-good fictional examination of the disparate personalities of Pope Francis and his immediate predecessor, the retired bishop of Rome.

Now there is a "three pope" book that attempts to pit retired Pope Benedict XVI and Cardinal Robert Sarah against Francis.

From the Depths of Our Hearts, presented as coauthored by Benedict and Sarah, includes a moderate essay by Benedict and a polemic by Sarah. The essays are surrounded by introductory and concluding remarks supposedly coauthored by the two but more probably written by Nicolas Diat, an editor at the French publishing house Fayard.

Diat, connected in various ways with the anti-Francis cohort, including Princess Gloria von Thurn und Taxis, German Cardinal Gerhard Müller, and U.S. Cardinal Raymond Burke, has collaborated with Sarah in the past to produce books attractive to those completely opposed to anything Francis has done or perhaps may do. Sarah is undoubtedly Diat's candidate for the papacy.

It's a shame and it's a sham. Benedict's 35-page essay, which might better have been attributed to Joseph Ratzinger, is a dense reflection on his personal dedication to celibate priesthood. It is, in its own way, rather lovely. He writes, from retirement, that priesthood is both incompatible with marriage and a means of escaping narcissism: "To enter the clergy means to renounce a self-centered life and to accept God alone as the support and guarantee of one's own life."* But, unlike Sarah, Benedict does not deny the teachings of the Second Vatican Council: celibacy "is not demanded by the very nature of the priesthood" (Presbyterorum Ordinus, 1965).

However, Benedict's erudition fades as Sarah's pages come into view, presenting the real reason for the book. The Amazon synod asked for the ordinations of married men and said a few things about women in ministry and, horror of horrors, even mentioned women deacons.

So, Sarah and Co. seem to have manipulated wheelchair-bound Benedict into standing up against Francis. It's just not fair. Benedict is an honest theologian, not a polemicist. For him to be manipulated into cooperating in an anti-Francis screed is beyond outrageous. It is elder abuse.

The Sarah essay is disturbing. In it, the curial cardinal attacks the synod's suggestions about evangelization. He discredits a married priesthood and pointedly dismisses the most interesting suggestions for women's ministry: their installation as lectors and acolytes and their ordinations as deacons.

Sarah presents the latest fiction as fact, that Ordinatio Sacerdotalis (1994) regarding women priests includes prohibition of women deacons. He writes: "debates about celibacy naturally give rise to questions about the possibility of women being ordained as priests or deacons. This question, nevertheless, was settled definitively by Saint John Paul II." What question? Deacons are not priests.

Further, Sarah seems to find in others what he clearly participates in himself: "Nowadays cleverly orchestrated media campaigns are calling for the female diaconate." His limited presentation of the centurieslong tradition of women deacons rails against documented history. He denies that women deacons were ordained, that they served in liturgies, and that their ministries extended beyond anointing women in baptism. In short, he recites the litany of misinformation the far right is so fond of, all carefully discredited by extensive scholarship.

Sadly, Sarah will gain a following. The screed-writing cardinal is twinned with the erudite retired pope on the cover — Ignatius Press apparently is maintaining the expressly denied coauthorship in its English-language edition — thereby lowering Benedict while elevating Sarah. Various conservative forces have already sent bulk orders of Sarah's previous books to Africa, and no doubt this entry is already on its way.

Two things: First, Ratzinger quite competently wrote, in 1997, that celibacy is not dogma; second, Ratzinger as prefect of the Congregation for the Doctrine of the Faith, then as pope, had ample opportunity to rule against restoring the ancient tradition of ordained women deacons. From 1982 to 2013 he did neither. We need to pay attention to the facts.

[Phyllis Zagano is senior research associate-in-residence at Hofstra University in Hempstead, New York. She will speak Feb. 21-22, 2020, at the Los Angeles Religious Education Congress in Anaheim, California and February 28, 2020 at the Catholic University of Leuven, Belgium. Her books include Women Deacons: Past, Present, Future (in Spanish as Mujeres Diaconos: Pasaso, Presente, Futuro), published in France and Canada as Des femmes diacres and in Portugal as Mulheres diáconos: Passado, presente, futuro. Study Guides are available for free download at https://sites.hofstra.edu/phyllis-zagano/.]

*This story has been updated to clarify a sentence and Benedict's title.