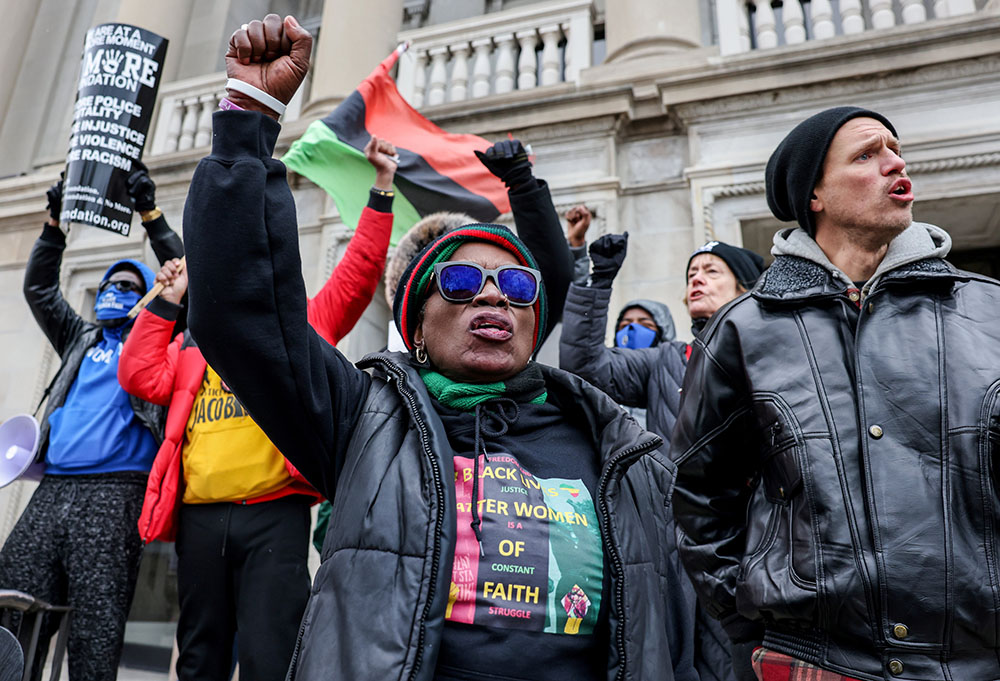 Protesters in Kenosha, Wisconsin, demonstrate on the third day of jury deliberations in the Kyle Rittenhouse trial Nov. 18. Rittenhouse was acquitted Nov. 19 in the shooting deaths of two people and the wounding of another with an AR-15-style rifle Aug. 25, 2020, during civil unrest in Kenosha over the shooting two days earlier of a Black man, Jacob Blake, by a white police officer. Lawyers for Rittenhouse argued their client acted in self-defense. (CNS/Reuters/Evelyn Hockstein)

Kyle Rittenhouse has been "acquitted on all charges in the shooting deaths of two men and wounding of a third at a Wisconsin protest against racial injustice last year," as the AP put it.

I don't say this glibly: God help us.

Rittenhouse, as we would say growing up, was clearly "looking for trouble." He intentionally traveled across state lines to clash, armed with an AR-15 semi-automatic rifle, with those protesting the police shooting of Jacob Blake, an African American man.

Despite his boyish white frat boy appearance, there was plenty of evidence of Rittenhouse's deeper white supremacist orientation, both before and after these events.

Two weeks before the Kenosha killings, Rittenhouse was captured on video fantasizing about killing African Americans who were leaving a local CVS. Without any evidence, Rittenhouse concludes that they were armed and shoplifting. "It looks like one of them has a weapon," Rittenhouse asserts in the video. "Bro, I wish I had my F---ing AR. I'd start shooting rounds at them."

Prosecutors argued that the video established Rittenhouse's general state of mind just ahead of the killings and demonstrated that "the defendant fervently sought to insert himself as an armed vigilante into situations that had nothing to do with him." Judge Bruce Schroeder ruled this evidence irrelevant and inadmissible. (Among other odd behaviors, the judge also ruled that prosecutors could not call the people who were killed or wounded "victims" while allowing the defense to describe protesters as "looters.")

Just 90 minutes after pleading not guilty to murder and weapons charges in January, Rittenhouse appeared at a Mount Pleasant, Wisconsin, bar in a T-shirt that read, "Free as F---," and allegedly drank three beers, despite being underage. He then posed for photos with members of the Proud Boys while flashing an "OK sign," a hand signal adopted by the alt-right to signify "white power." 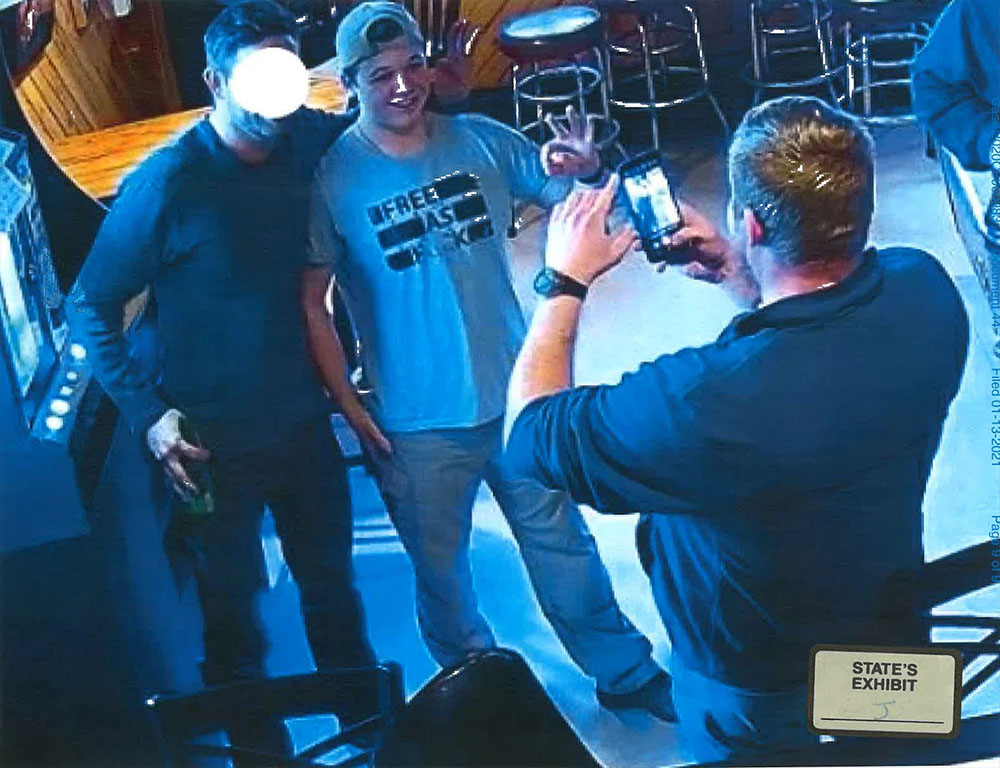 Kyle Rittenhouse was photographed wearing a "Free As F--k" shirt, and meeting members of the Proud Boys group at a bar in January 2021. (RNS/Kenosha County District Attorney)

He hung around for the white supremacist group to serenade him with "Proud of Your Boy," a twisted adaptation from Disney's "Aladdin" that has been fashioned into a Proud Boys anthem.

That photo, with that "Free as F---" declaration, heartbreakingly captures the brazenness of white supremacy in 2021.

There's no doubt in my mind that if Rittenhouse's skin were Black — or the skin color or likely religion of the characters from "Aladdin" — "acquitted on all counts" would not have been the headline Nov. 19. The court system would likely not have let him walk away from killing two people and wounding another. He certainly would not have received massive funding for his legal defense from a conservative white Christian crowdfunding site.

And a Black Kyle Rittenhouse wouldn't be celebrated by prominent white Republican elected officials who love to wear their Christian identity on their sleeve. Rep. Lauren Boebert not only celebrated the decision but added, "Glory to God!" U.S. Reps. Madison Cawthorn, Paul Gosar (who was just censured for sharing an anime video showing him killing U.S. Rep. Alexandria Ocasio-Cortez), and Matt Gaetz not only celebrated the verdict but openly offered Rittenhouse internships in their congressional offices.

If Rittenhouse didn't look like the white boy next door (to whites), we likely wouldn't even have such a trial. A Black figure openly carrying an assault weapon and boldly approaching law enforcement officers likely would have been shot, rather than given water, by police in the streets of Kenosha that night. And he certainly would not have been sent on his way by police in an armored vehicle with this comradely benediction: "We appreciate you guys, we really do."

After the verdict, Karen Bloom and John Huber — the parents of one of the victims, 26-year-old Anthony Huber — captured another danger for our collective future. As they noted, the outcome "sends the unacceptable message that armed civilians can show up in any town, incite violence, and then use the danger they have created to justify shooting people in the street."

That is the ultimate freedom, the unfettered license, of white supremacy. We've seen it before — countless times. In my home state of Mississippi, Roy Bryant and his half-brother J.W. Milam — the two men who abducted, tortured and murdered 14-year-old Emmett Till — were acquitted after just an hour of deliberation by an all-white, all-male jury just one month after the murder. Protected by double jeopardy, the men proudly confessed to his murder four months later, calling it a form of Southern justice, in a story they sold to Look magazine for $4,000 — about $40,000 in today's currency.

Conservative magazine editors and book agents are undoubtedly circling around Rittenhouse. And the support he's finding within hours of this verdict is an indication that we'll see Rittenhouse — if not himself, then as an iconic hero — on the CPAC stage, conservative speaking circuit or at the next Republican National Convention.

As Professor Anthea Butler, author of White Evangelical Racism, predicts, he'll also likely be invited onto white evangelical stages and even into the pulpits of those who see his murderous actions as an example of defending and "saving America" as they understand it, as a white Christian country.

Lest we make the mistake of thinking Rittenhouse is some aberration, recently released data from PRRI's American Values Survey shows that today a frightening number of Americans — especially those who are white, conservative and Christian — believe that violence may be necessary to "save the country."

Attitudinally, support for violence is positively correlated with feeling like "a stranger in my own country" and with a belief that "God has granted a special role for America in human history."

One-quarter of white evangelical Protestants (26%) and three in 10 Republicans (30%) agree today that "true American patriots may have to resort to violence if that's what it takes to save the country." 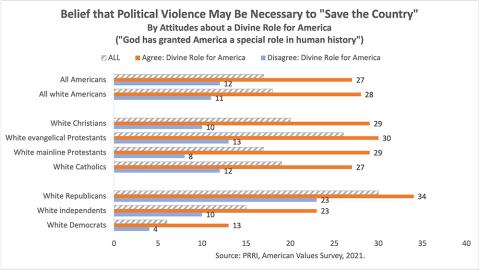 Today, for an alarming number of white conservative Christians, the mark of Christian faithfulness is not a love that inspires them to lay down their lives for their friends, but a defensiveness that lures them to take the lives of their fellow citizens.

The anti-democratic and white supremacist core of this worldview snaps into focus as soon as we ask just one question: What is the "America" they are saving? This question is at the heart of the MAGA ideology that has now fully overtaken one of our two major political parties.

That second "A," for "again," is the hermeneutical key that unlocks the obfuscation. This nostalgia for a white Christian America has become the weapon of choice in the culture wars. In that vision of the country, white law and order reign, and with refreshments and pats on the back, white vigilantes are informally deputized as partners. And Black people protesting in the streets or even shopping in the local CVS are seen as suspect for not playing their properly deferential roles or staying in their assigned subservient places.

If Trump has done anything for us, he has peeled back a thin veneer of patriotic- and Christian-sounding words to reveal the core claim underneath it all: that God intended America to be a white Christian nation. That claim has literally generated — for those among the chosen — a license to kill anyone who threatens that norm and the confidence that those actions will not only be free of negative consequences, but be rewarded both here on earth and in heaven.