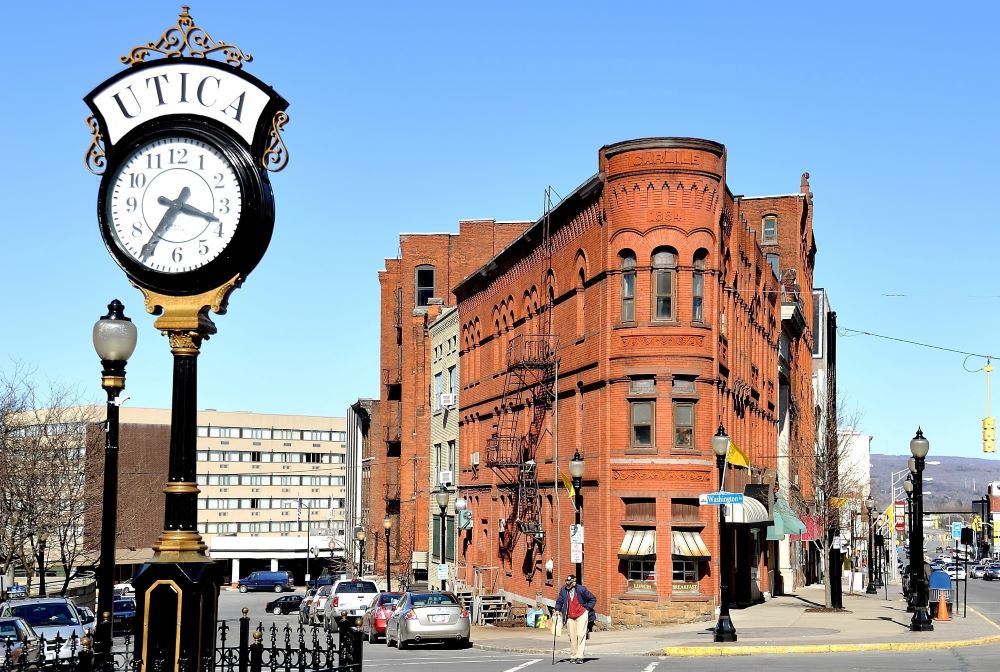 The Bosnian Islamic Association bought this former United Methodist church from the city of Utica to provide worship space for the growing Bosnian Muslim community. The first Bosnian refugees arrived in the Rust Belt city in 1993. They and refugees from other countries have helped stem population decline and revive the upstate New York city. (Library of Congress/Carol M. Highsmith Archive/Carol M. Highsmith)

From the opening lines of Susan Hartman's new book, City of Refugees: The Story of Three Newcomers who Breathed Life Into a Dying American Town, published last week, I was hooked. It is an engaging, captivating book about the stories of three refugees and their families, all of whom eventually settle into a small, Rust Belt city named Utica, New York, which also happens to be the place where I grew up.

Both sides of my family are from Utica; my mother is the second youngest of seven children, my father the second oldest of five. My experience of Utica began in the late 1980s when my parents moved our nuclear family moved back to their hometown to be closer to the extended family after my father left active duty as an officer in the United States Marine Corps. I was born on a military base, as was one of my brothers, and after several years of moving as a young family living the nomadic military life, we settled in the civilian world.

I started first grade at the elementary school where my three younger brothers and I would eventually all study before graduating and going to the Catholic junior-senior high school in town. We all graduated from high school, graduated from college and started our adult lives. All three of my brothers still live in New York state, the youngest living and working in Utica. And my parents are not far from there, having moved during the pandemic to a quieter place north of the city near the Adirondack Mountains.

It's hard to think back as a child and teenager and remember any strong feelings one way or another about Utica. It was, in my view now, a good place to grow up, especially when your large extended family was nearby.

When I was a senior in high school, I was selected as one of about 25 "Teen All-Stars," an award given by the local newspaper, the Observer-Dispatch, which honored "outstanding high school seniors from our region since 1992." I recall being interviewed for the special section featuring the selected students and being asked what I liked most about growing up in Utica. My response was that I loved the centrality and feel of this small city: it was both about an hour from the Adirondack Mountains and an hour from bigger cities like Syracuse and Albany; and yet just the right size to find everything you need — including cultural highlights like a symphony orchestra and world-class art museum — but always small enough that you could feel at home and recognize people all across town. 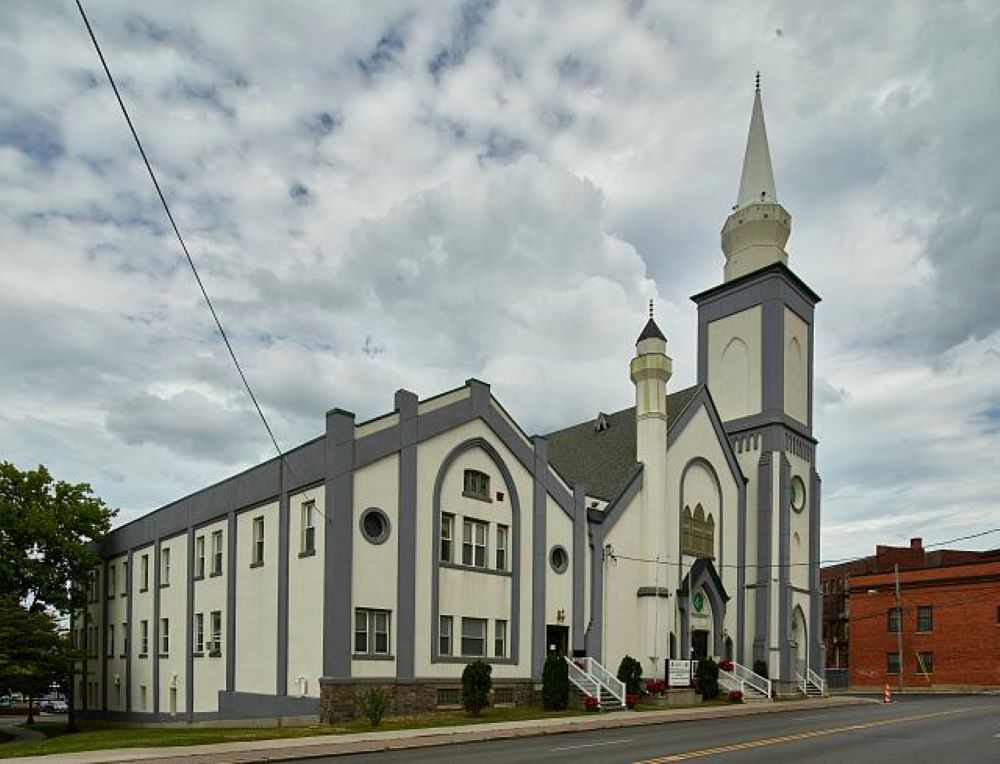 The Bosnian Islamic Association bought this former United Methodist church from the city of Utica to provide worship space for the growing Bosnian Muslim community. The first Bosnian refugees arrived in the Rust Belt city in 1993. They and refugees from other countries have helped stem population decline and revive the upstate New York city. (Library of Congress/Carol M. Highsmith Archive/Carol M. Highsmith)

For Utica, the second half of the 20th century really was an experience of "dying," as Hartman's subtitle describes it, at least in terms of industry and population size. In 1960 the population was around 100,000, but by the turn of the century it was nearly half that. Utica was a lot like many other Rust Belt cities across the American Northeast — Dayton, Cleveland, Columbus, Erie, Buffalo — a shadow of what it once was.

But something began to change in the 1990s around the same time I was growing up there. Utica became a destination for refugee resettlement.

The influx of Bosnian refugees in the mid-'90s helped stem the tide of population decline. In the early 2000s thousands of refugees from Myanmar, mostly of the persecuted ethnic group known as the Karen, settled in Utica. More recently, Iraqi and Somali Bantu refugees have made Utica their home.

Even if you've never heard of Utica, I bet you recognize the name "Chobani," the wildly successful yogurt brand. Its founder, Hamdi Ulukaya, who came to the United States in 1994 from Turkey and lived in Utica, founded and grew his yogurt empire not far from the city. He has made a concerted effort over the years to hire refugees and other immigrants who have relocated to the greater Utica area over the decades.

The significance of how this small city in Central New York has affected the lives of local Uticans and the refugees, who now also call the city home, has drawn the attention of national media over the years, especially in the wake of the Trump administration's draconian anti-immigration, anti-refugee and anti-Muslim policies.

In 2016, PBS News Hour ran a segment that showed how Utica was a model for welcoming refugees, not only for the basic humanitarian reasons, which all people should support, but also because it is a way to help sustain and support the local economy and community. When Trump and his allies were calling for a ban on admitting Syrian refugees into the country, the Utica mayor, Robert Palmieri (the father of one of my elementary and high school classmates), said that Utica would welcome them.

Obviously, I think about Utica a lot because of my personal ties. But it is rare that I encounter so many other people talking about my hometown. In addition to the news coverage and Hartman's recent book, a feature-length documentary about the city titled "Utica: The Last Refugee" was recently produced.

Hartman and others are quick to point out that Utica is not a utopia. It still has its challenges, and the life of a resettled refugee who traveled halfway around the globe to a strange, new place is difficult beyond words.

As journalists and scholars have noted, even though many of the Bosnian refugees in the '90s were mostly Muslim, and therefore quite different religiously and culturally from the predominantly Christian population of Irish, Italian and Polish descendants, their Eastern European whiteness made their transition to Utica easier in many ways than later refugees fleeing strife in Asia, Africa and the Middle East. Systemic racism is real, including in a small city that prides itself on welcoming refugees.

Still, there is something deeply moving about the stories these new Uticans from war-torn parts of the globe share in Hartman's book. We are privileged to watch Sadia, a teenage Somali Bantu refugee, grow up over the years, witnessing from a distance her struggles and joys. We come to know Ali, an Iraqi interpreter who has risked his life to translate for Western journalists and ultimately resettled to Utica. And we follow journey of the Bosnian woman Mersiha and her family as they navigate life and business dreams in this small city.

Hartman brings their experiences, and those of their friends and neighbors, to life in a way that is captivating, even if you aren't from Utica. But for those of us who know its streets and neighborhoods; its history of pain, decline, struggle and joy; its institutions, schools, parks, attractions and community events; and even some of the individuals that appear in the stories, Hartman's book is both a mirror holding up a place I know so familiarly that I can forget what it looks like and a good reminder that there is always more to see.

Today about a quarter of Utica's population is composed of those who came to the city as refugees over the last few decades. Without romanticizing the struggles and unspeakable suffering that led them to flee their homelands, the refugees that are as much a part of Utica as I or my family ever were have a lot to teach me about gratitude, perseverance and perspective. Their stories are also an important reminder of the harm that is done, not only to those around the globe we might shut out as a country as xenophobia and nationalism continue to rise, but also to the people who may already inhabit these places.

Utica is unquestionably better off because of the thousands of refugees and their families that have resettled there, and as Hartman's book makes clear in their own words, so are they. Let us not forget that Jesus admonished his followers to always welcome the refugee because, as he said, "I was a stranger, and you welcomed me in" (Matt 25:35). May each of our American cities strive to become, as Utica has intentionally sought to be, "a city of refugees."

A version of this story appeared in the July 8-21, 2022 print issue under the headline: Lessons from Utica, a small city that was transformed by refugees.