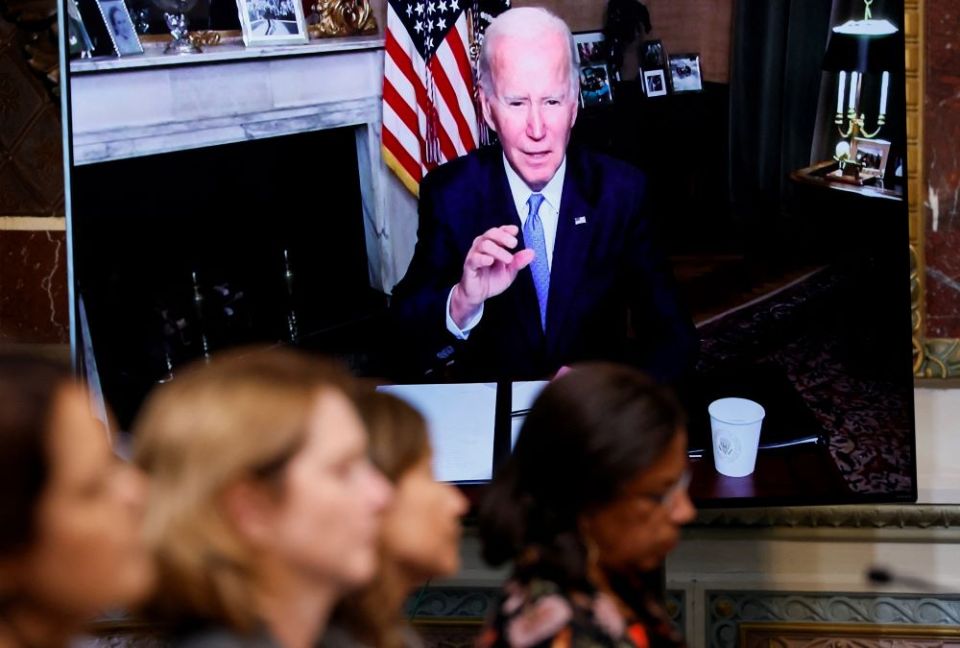 President Joe Biden delivers remarks from the White House during a virtual event in the Eisenhower Executive Office Building in Washington Aug. 3. Biden signed an executive order to allow Medicaid funds to be used to help low-income women pay for abortion if they have to go out of state to obtain one. (CNS/Reuters/Evelyn Hockstein)

In The New York Times, White House correspondent Michael Shear has a balanced piece about President Joe Biden's ambivalence on abortion at a time when many activists are calling for a more confrontational posture. Biden's wrestling with the issue over many years humanizes him to many voters, but activists want a champion. The piece finishes with a quote from Mini Timmaraju, the president of NARAL Pro-Choice America, regarding the president's need to use more forceful language:

"He’s done that," she said. "And he's going to need to get more comfortable with that because this is the modern-day Democratic Party. He's getting there, from what I can see."

What activists cannot imagine is that they might be the ones who do not understand the "modern-day Democratic Party." Activists are not really representative of the electorate, and the voters whom they do represent are those who never can flee to the other party in a general election. Biden's ambivalence has served him well through the years. Despite the high emotions of the moment, he should stick to it.

At Politico, Adam Wren and Natalie Allison report on the Ohio Senate candidacy of Democratic nominee Tim Ryan. Currently a member of Congress, Ryan has been campaigning in the rural parts of the Buckeye State, places where Democrats do not usually bother to make their case. He will not win those areas, but if he can keep it close, his expected big wins in the cities could put him over the top in a state that has been trending strongly Republican in recent years. Ryan is a really good guy, precisely the kind of moderate on social issues and populist on economic issues that the Democrats need to rebrand their party.

Nate Tinner-Williams at the Black Catholic Messenger reports on a special Mass that marked the 101st anniversary of the murder of Fr. James Coyle. The priest was murdered by the Ku Klux Klan because he had presided at the wedding of an interracial couple. We should all pray that his cause for canonization proceeds.

From the Arizona Republic, Gloria Rebecca Gomez reports on the installation of Phoenix' new Catholic shepherd, Bishop John Dolan. I watched the ceremony on livestream, and it represents a bright new chapter for the church in the nation's fastest-growing city. I am betting it won't take long for Dolan to remove Phoenix from the list of dioceses that refuse to have female altar servers.

Reuters reports on a lawsuit by clergy in Florida who claim that state's ban on abortions after 15 weeks violates their religious freedom. Here we have two hot button culture war issues, abortion and religious liberty, combined in a frivolous way that harms the seriousness both issues deserve. Our cultural understanding of human dignity has always been influenced by religion, but our civil laws regarding abortion do not rely on any religious doctrine to be justified morally. A sonogram of a 15-week fetus is enough. The fact that clergy are complicit in this charade only makes it the more appalling.

Another great article at Architecture Daily about urban planning and climate change. The author, architect Maria-Cristina Florian, also addresses the need for urban planning that specifically addresses the plight of poor and marginalized neighborhoods: If you make them too green, too fast, prices rise and gentrification drives out the long-term residents.

At ArtNet, the French government has announced it plans to complete the restoration of the Cathedral of Notre Dame in Paris in time for the 2024 Olympic Games, which will be held in the City of Light that year. The April 2019 fire that nearly destroyed the venerable Gothic structure touched a chord with Catholics and Francophiles the world over, and it will be a joy to visit the restored cathedral again