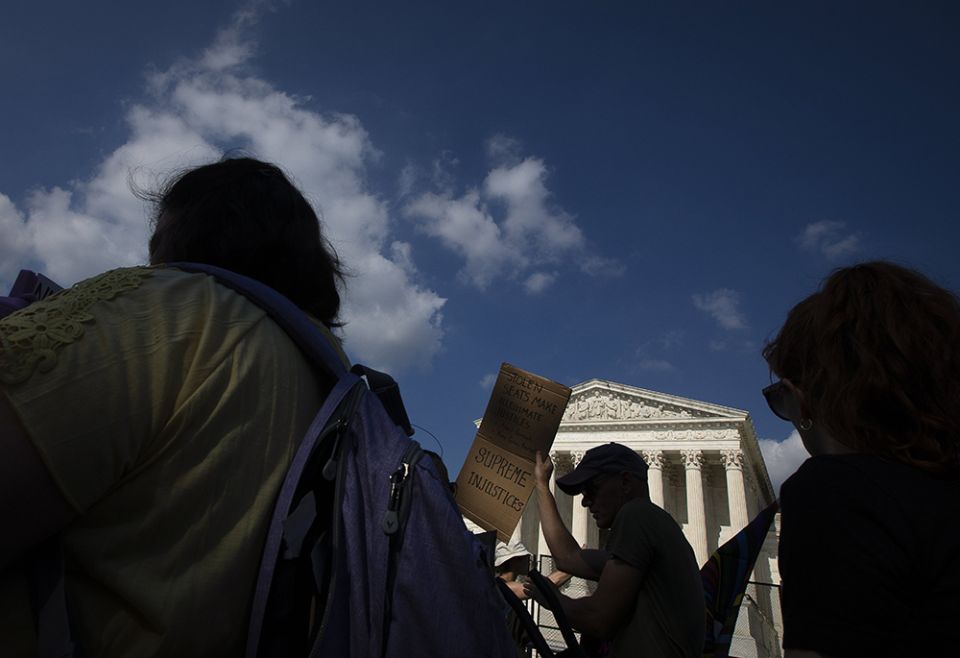 Abortion demonstrators are seen near the Supreme Court June 24 in Washington, as the court overruled the landmark Roe v. Wade abortion decision in its ruling in the Dobbs case on a Mississippi law banning most abortions after 15 weeks. (CNS/Tyler Orsburn)

It is always interesting to see how the Vatican covers a news event. In their reporting on Catholic responses to the U.S. Supreme Court decision overturning Roe v. Wade, the Vatican news service highlighted statements from Cardinal Blase Cupich of Chicago and Cardinal Sean O'Malley of Boston. Not a word about the statement from the U.S. Conference of Catholic Bishops.

Politico has a roundup of first impressions about Roe being overturned. Michael Wear, who worked in the Office of Faith-Based and Neighborhood Partnerships for then-President Barack Obama, is hopeful that now the parties will be driven to the center. I wish I had his hope. Same for Abby McCloskey, who has been a policy adviser to GOP candidates, who said, "Conservatives must urgently embrace a whole-life approach." They should, but many won't. I suspect Charlie Sykes is closer to the truth: "Instead of what Catholics have called a 'seamless garment,' or holistic reverence for life, post-Roe America will be even more bitterly polarized."

In The New York Times, Isvett Verde profiles some of those whose lives benefitted from DACA, the Deferred Action for Childhood Arrivals program introduced by Obama in 2012. The benefits of DACA in the lives of these remarkable Dreamers are clear, but the shadow of uncertainty remains keen. How is it that Congress has failed to open a pathway to citizenship for these young Americans?

In The Washington Post, Jason Willick speculates on the electoral fallout for those Republican senators who backed the modest gun control legislation that passed the upper chamber last week. It is true that most of the restrictions affect those aged 18-20, "a small group that is not a driving force in GOP politics" Willick observes. But we live in a time when the Second Amendment, like Roe, like the border wall, are totemic, not merely practical, issues.

Cardinal Gerhard Müller, former prefect of the Congregation for the Doctrine of the Faith, should be advised against giving interviews to LifeSiteNews, the extremist website that is not really about life and certainly is not about news. The German cardinal attacked Cardinal-designate Robert McElroy's views, but only after misrepresenting them. There have always been struggles within the College of Cardinals, but we have never seen these kind of unseemly, public attacks. Don't they need another auxiliary in Kazakhstan?

At The New Yorker, Dexter Filkins writes about Florida Gov. Ron DeSantis and whether or not he can "displace" former President Donald Trump as the Republican party's "combatant-in-chief." Filkins writes, "DeSantis's approach to the pandemic gave rise to an entire governing strategy, in which he regularly denounced some outrage, invariably perpetrated by the left, and proclaimed that he was the only one brave enough to stop it. He laced his speeches and press conferences with anger; when he walked, he thrust out his chest like a soldier on parade." DeSantis, more than Trump, may be the future of the GOP and this profile shows how scary that prospect is.

A woman's right to choose?