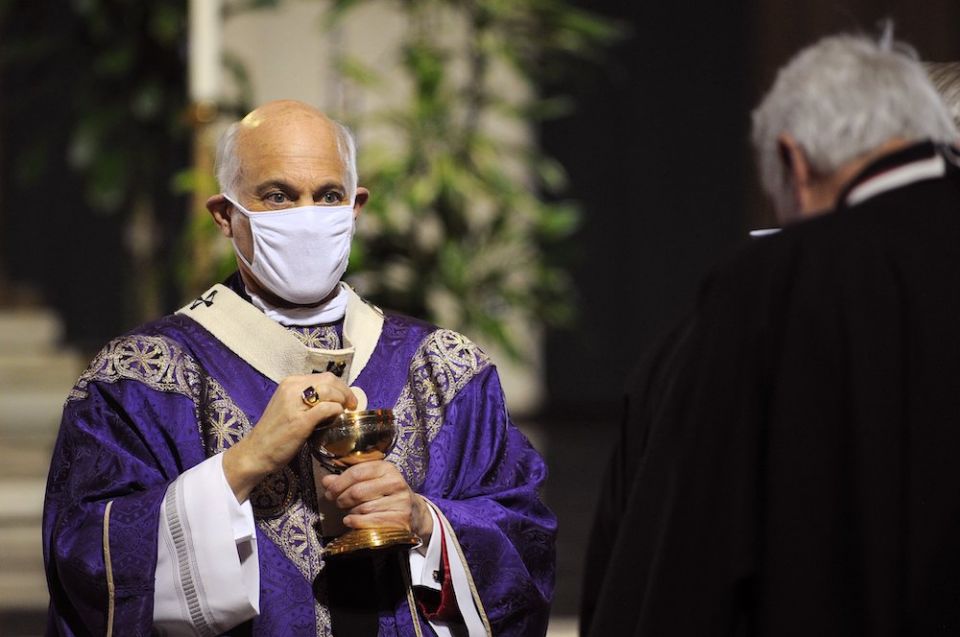 San Francisco Archbishop Salvatore Cordileone distributes Communion during a Mass for the homeless Nov. 6 at the Cathedral of St. Mary of the Assumption. (CNS photo/David Maung)

From ABC 7 News in San Francisco, Archbishop Salvatore Cordileone was asked to reschedule a visit to St. Agnes Church after he announced he had not been vaccinated against COVID-19. The pastor explained to the archbishop that they have a policy that only vaccinated clergy can celebrate Mass. I have a question: If the resignation of Archbishop Michel Aupetit of Paris had to be accepted because revelations about a past relationship with a woman left him unable to govern his diocese, how can Cordileone govern a diocese when some of his parishes will not host him because he refuses to get vaccinated?

We all expected the reports from the Select Committee on the Jan. 6 insurrection to be damning, but to recognize how complicit then-White House chief of staff Mark Meadows was in the planning and, apparently, in discussions with the National Guard during the riot itself, is beyond damning. No wonder Meadows wants his book to come out before he testifies: He is going to need all those royalties to cover his legal bills. Boston College's Heather Cox Richardson has some fine analysis.

In The New York Times, Michelle Cottle of the paper's editorial board looks at two of next year's biggest primary contests, the Democratic primary for Senate in Pennsylvania and the GOP gubernatorial primary in Georgia. In addition to doing a fine job explaining the way these two races demonstrate the larger issues facing each party, Cottle gets a prize for penning the phrase "Trump-addled invertebrates." Magnificent.

In the The Washington Post, columnist Kevin Blackistone argues that the International Olympic Committee needs to be stricter in demanding adherence to human rights by those countries designated to host the games. Both China and Russia have hosted the Olympics while undertaking no effort to improve their record on human rights. He does not, however, explain how that could be accomplished. My idea is much more straightforward: Award the Summer Olympics to Athens permanently and the Winter Olympics to Oslo or Innsbruck. Not only would you eliminate the concern about rewarding a serial abuser of human rights, you would eliminate the corruption and the diversion of public monies that accompany the construction of so many venues, most of which fall into disuse once the Olympics are over.

CNN reports that Gov. Gavin Newsom of California intends to introduce legislation modeled after Texas' law inviting vigilante enforcement of an abortion ban but will apply it to gun ownership. Admittedly, watching the conservative majority of the U.S. Supreme Court eventually hoist on their own petard will bring about some schadenfreude, but the Newsom approach is still not good for the country. The old adage, "If you can't beat 'em, join 'em," has all the marks of defining deviancy down in this moment of history.

At Politico, politics reporter Maya King looks at more GOP shenanigans in Georgia, this time diluting the power of newly won Democratic officials in county government and school boards. The article shows the ongoing necessity of winning state legislative elections: Democrats dropped the ball in 2010 on that score and have never recovered. Still, I am betting that the good people of metro Atlanta are not going to stand for this and, galvanized by the gubernatorial candidacy of Stacey Abrams, these Republican efforts to frustrate the will of the voters will backfire.

Fr. Robert Imbelli, writing at The Catholic Thing, echoes the insight Pope Francis spoke in Athens when he addressed the clergy and religious of that diocese, a speech to which I called attention last week. Imbelli places St. Paul's visit to the Areopagus, recounted in the Acts of the Apostles, alongside St. Luke's Gospel and its early chapters in which the universal significance of Christ's coming is proclaimed. Imbelli includes a beautiful poem from the Bengali poet, Rabindranath Tagore that is exquisitely apt for Advent.

In this third week of Advent, the sense of anticipation shifts decidedly from dread to joy, beginning with Gaudete Sunday and the use of rose vestments to indicate the end of penitential purple is nigh. The Gospel reading Sunday still had a bit of fire and brimstone but the readings from Zephaniah and St. Paul, as well as the exquisite passage from Isaiah that served as a responsorial psalm, are teeming and overflowing with anticipatory joy. I can think of no piece of music that better mimics that sense of teeming, overflowing joy than the choral that opens Bach's Cantata "Wachet auf, ruft uns die Stimme," BMV 140. If sacred music can be said to frolic, this music frolics. I first learned the melody by listening to and then playing Bach's chorale prelude for organ on the same tune. Later, Catholic hymnals finally started including the hymn tune among their Advent selections. Here is the opening choral performed by the Netherlands Bach Society, but feel free to keep listening to the entire cantata.