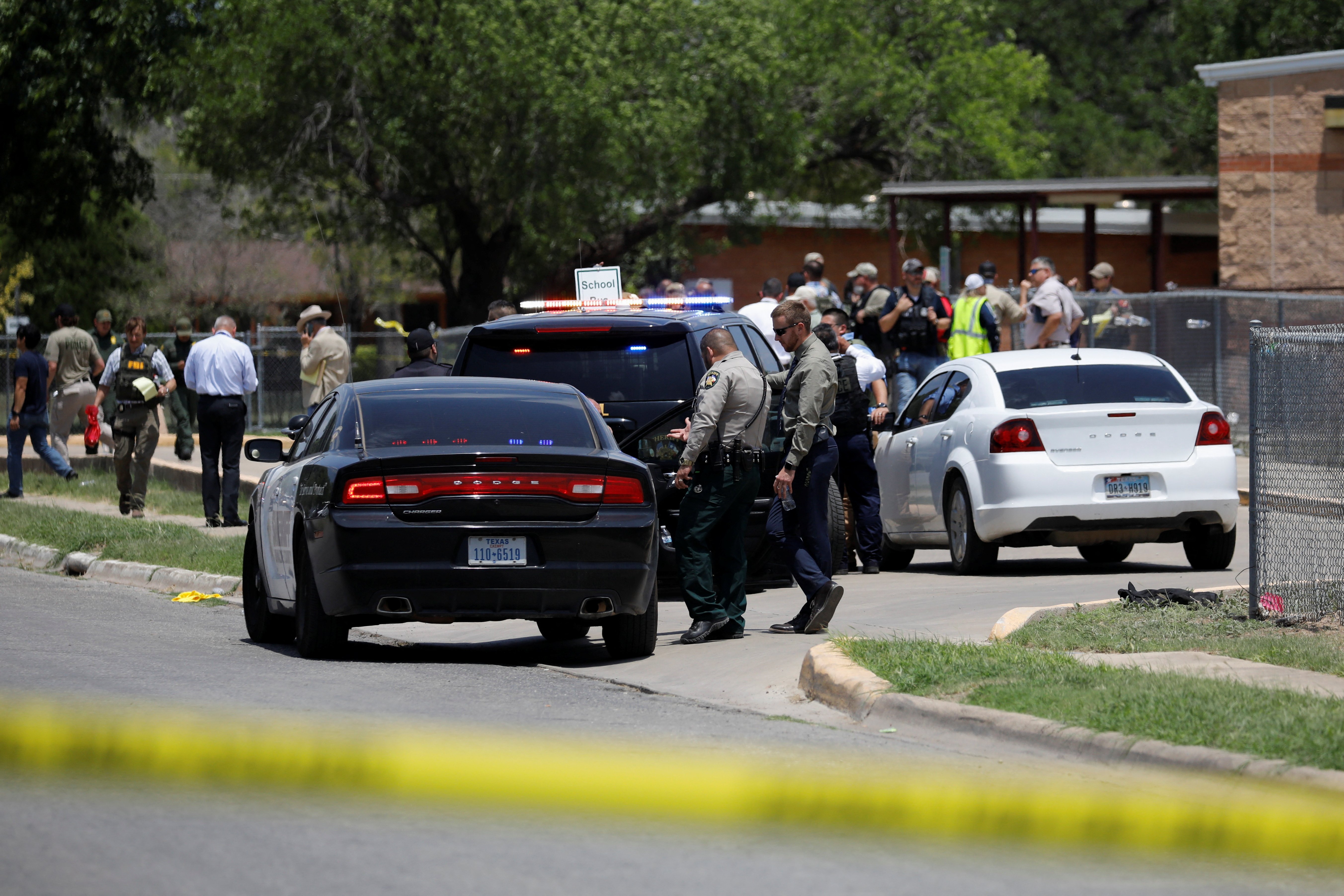 Law enforcement officers guard the scene of a shooting at Robb Elementary School in Uvalde, Texas, May 24. (CNS/Reuters/Marco Bello)

At the Arizona Republic, Bill Goodykoontz reports on the different ways cable news outlets covered the mass murder on May 24 at an elementary school in Uvalde, Texas. I was not surprised that Fox News fell into talking points that were ridiculous and insulting, but it was still revolting to watch. As the night wore on, they were quick to criticize President Joe Biden for "politicizing" the tragedy. They beat the drum for more armed guards at schools. They mocked his comments about the gun lobby, as if there had been no firearm used in the killing. Even by their low standards, it was appalling.

Politico reports on Connecticut Sen. Chris Murphy, who refuses to resign himself to the fact that the Senate will likely do nothing on gun control in the wake of horrific killings in Texas. His begging for 10 Republican senators willing to take some action puts one in mind of Abraham's dialogue with God about how many just men needed to be found in Sodom in order to spare it. I fear that the GOP is too terrified of crossing the gun lobby to reach even a small compromise on gun legislation.

From the Vatican, a press conference featuring those working to coordinate humanitarian assistance in Ukraine. One of the panelists, Tetiana Stawnychy, is currently the president of Caritas Ukraine. She previously was the director of the U.S. bishops' Committee on Aid to the Church in Central and Eastern Europe, where I collaborated with her on an annual Catholic social doctrine seminar in Warsaw. She knows the lay of the land throughout the region and she has all the right skills needed to coordinate this heroic work. The church is blessed to have people like Stawnychy leading the effort to convert existing structures to the new task of coping with the dreadful fallout from war. Blessings on their work.

At least there was some good news for the country on the night of May 24. In Georgia, three state Republican officials running for reelection against a Donald Trump-endorsed challenger, won their contests. I was especially glad that Secretary of State Brad Raffensperger, who refused to collude with Trump to overturn the 2020 election, won his contest. Although he is a Republican, I hope he wins in November so that the integrity of the 2024 election will be a bipartisan cause. Incumbent Gov. Brian Kemp thumped his Trump-endorsed opponent, but it would be good for Georgia and for the country if Kemp were to lose to Democratic nominee Stacey Abrams. She was unopposed Tuesday, but she was still the winner because turnout was so high. The New York Times has the results.

Republicans have been warning about election fraud, and now we know they have some actual experience of the problem. The Washington Post reports that in Michigan, the elections bureau announced that five of the 10 GOP candidates for governor in that state's primary submitted false signatures on the petitions needed to get on the ballot. The bureau estimates that some 68,000 signatures were fraudulent, and suggests that the candidates who submitted them should be barred from the ballot. The state elections board, which consists of two Democrats and two Republicans, will decide the matter.

The priceless Jack Shafer at Politico on the culture at The New York Times and why they constantly get into squabbles with experts, like Haiti historians, when they jump into a topic like they are the first ones to do so. Shafer gets most of this right, but I would have added one note he doesn't: Journalism is a craft, and so is history, and the skills needed for each overlap a bit but they are quite distinct. His quotes from Boston University's Chris Daly, who has worked as both an historian and a journalist, focus on the motivations of each craft, not the technique, and I think that is part of the problem.