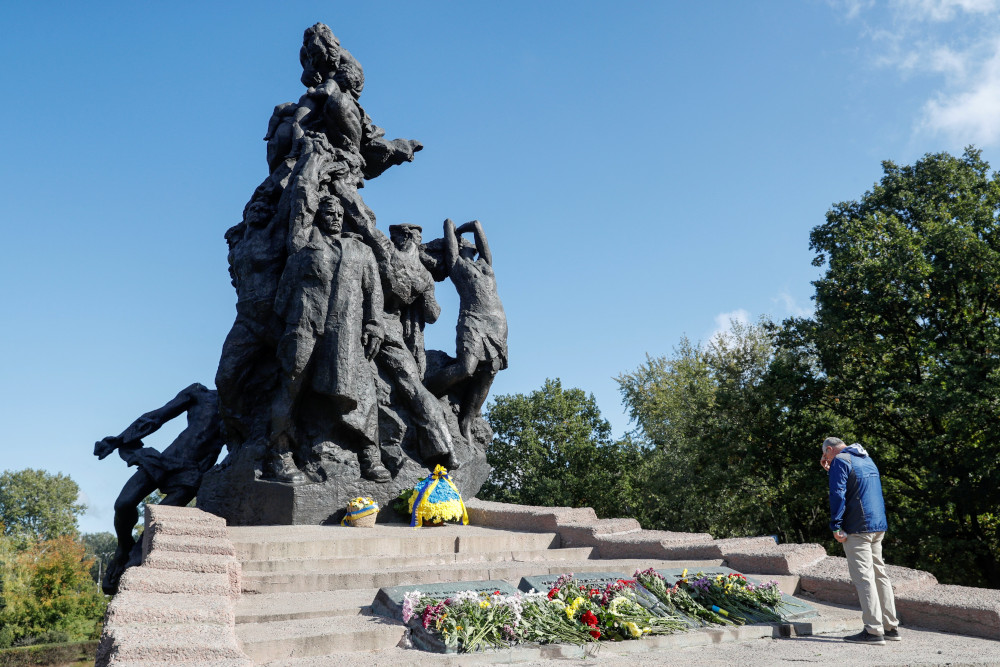 A man prays during a commemoration ceremony for the victims of a massacre of Jews during the Nazi Holocaust at Babi Yar in Kyiv, Ukraine, in this Sept. 29, 2021, file photo. (CNS/Reuters/Valentyn Ogirenko)

In The New Yorker, one of our time's truly great journalists, Masha Gessen, writes about the effort to construct a monument and memorial at Babyn Yar, the ravine in Kyiv where 33,771 Jews were murdered by the Nazis within a 36-hour period in 1941. It was the largest single killing in the Shoah. The monument has, like everything else in Ukraine, become embroiled in Russian President Vladimir Putin's war and Gessen probes the attitudes of both the Russians and Ukrainians who had worked on the project as well as the surprising effect the monument had on her. Just beautiful reporting and writing.

Sen. Rand Paul (R-Ky.) is not just any fool, but has now made himself Putin's fool. In a hearing with Secretary of State Anthony Blinken, Paul repeated Kremlin talking points as if they were gospel truth. No, senator, this war was not caused by NATO expansion. No, the fact that the Soviet Union controlled Ukraine for many years has no bearing on the country's independence today. Does Paul think Great Britain would be justified invading the eastern half of the United States because, after all, they were once the imperial power there? Should Mexico be permitted to reclaim Texas and California? Why should France not have New Orleans, St. Louis and Detroit restored to it?

Rep. Madison Cawthorn (R-N.C.), once deemed a rising star in Trumpian circles, is having a rough time of it lately. This week, he brought a gun into Charlotte's airport, a misdemeanor charge but a thing so stupid, it is hard to just forget. Unless, he did it on purpose to draw attention away from photos that surfaced over the weekend showing him wearing women's lingerie at a party. This came after he made accusations that some of his Washington confreres had invited him to orgies, a charge he walked back and tried to blame on the Democrats. It is time for him to find an exit from the limelight.

In The New York Times, reporter Maggie Haberman looks at the GOP Ohio Senate primary in which the Club for Growth, the ultra-conservative, anti-tax political action committee, is backing Josh Mandel while former President Donald Trump has thrown a late endorsement to J.D. Vance. The fight is getting ugly, not just between the candidates but between the PAC and Trump. There is a kind of justice in this scenario.

At the Working-Class Perspectives blog, Jack Metzger explains why proposals for free pre-K and community college are morally sound but proposals for free college and college debt forgiveness are much more problematic. Of the latter two policy ideas, he writes:

The class-skewed benefits of these initiatives are relatively complicated, but we should also pay attention to the messages they reinforce. Prioritizing free college and student debt forgiveness plays into a toxic narrative that has deep roots in our public discourse: that college-educated people are more valuable, more worthy of public subsidy, than the so-called "poorly educated." This narrative accepts that college graduates deserve to be paid more, but it also offers a false promise: that the primary way to increase wages and living standards – or more grandly, to restore the American Dream of upward mobility — is for more and more people to get college degrees. Both these messages are false.

Metzger does not address one group that I think warrants some degree of college debt forgiveness, those who started college but dropped out. I think universities and colleges, however, should be made to pay off at least half of that debt: They accepted but could not retain the students. Why should the cost of that fall only on the students? But Metzger is right that we need to raise real wages for all working-class people and promote policies like child care tax credits and free pre-K that benefit all workers, those with degrees and those without.

From Architectural Digest, a look at six of the most beautiful — and sustainable — buildings erected so far. I am happy to call attention to the one in Connecticut, the Marcel Hotel, located in the former Armstrong Rubber Company's headquarters in New Haven, an imposing, brutalist building by Marcel Breuer. If you have driven on I-95, you will have seen it on the north side of the highway.