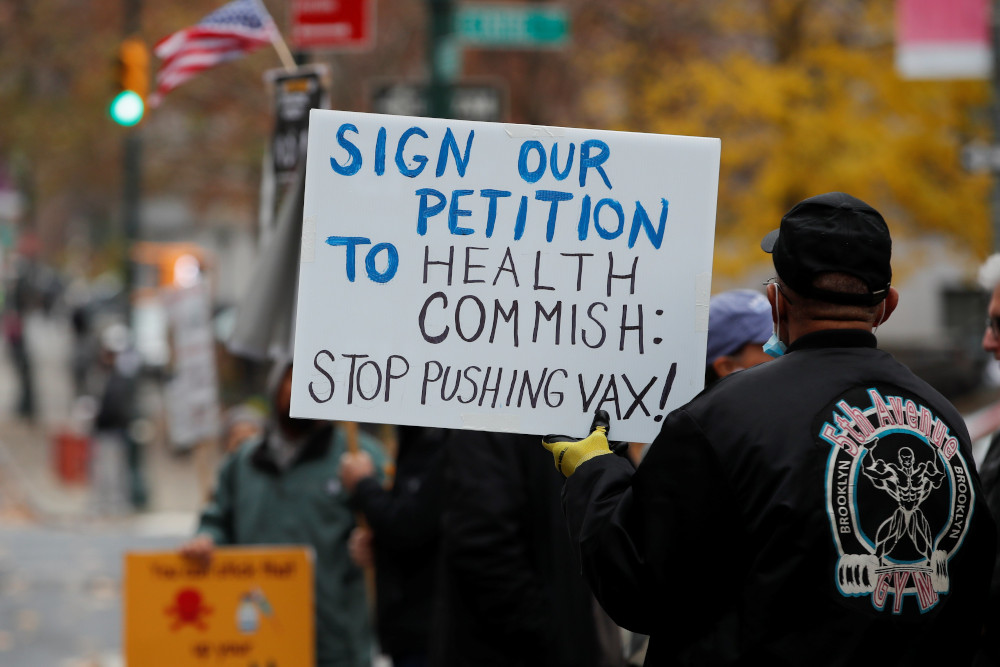 Protesters demonstrate outside the New York City Department of Health offices after New York City Mayor Bill de Blasio announced Dec. 6, 2021, that all employers in the private sector must implement COVID-19 vaccine mandates for their workers in New York as the highly transmissible omicron variant spread in the U.S. (CNS/Reuters/Mike Segar)

Justice Neil Gorsuch dissented from the Supreme Court's decision to deny relief to healthcare workers in New York who claimed a religious exemption from the state's coronavirus vaccine mandate, a condition of their employment. It is worth reading the dissent. I am a huge fan of the First Amendment, and prefer an expansive understanding of religious freedom, but to repeatedly fret about the "irreparable harm" the mandate does to the workers who refuse it, what about the irreparable harm to the people who might die if these unvaccinated workers were permitted to continue to work in hospitals and nursing homes? Gorsuch is one of those people who can be simultaneously brilliant and obtuse, but this is just nutty.

At Persuasion, Jonathan Rausch examines how Donald Trump has convinced millions of Americans that it was not him, but the Clinton campaign and the FBI that really colluded with Russia to affect the outcome of the 2016 election. Along the way, Rausch reminds us just how much evidence of Trump's collusion there was. Rausch demonstrates how susceptible the American people are to Trumpian propaganda.

At Business Insider, a new report on worldwide inequality, undertaken by Thomas Piketty and others notable economists, shows that the problem is even worse than previously thought: The bottom half — HALF! — possess just 2% of the world's wealth while the top 10% own 76%. "The world's policy choices have led to wealth trickling up rather than down," the article states. It will be interesting to see if the changes in the labor force will have an effect on these numbers going forward. Otherwise, look for a run on pitchforks.

Hypocrisy in politics is almost always an equal opportunity phenomenon. These days, it is a bit rich to hear liberal legal scholars like Aziz Huq complaining that the Supreme Court might overturn Roe v. Wade despite the fact that it has been a precedent for almost 50 years! Plessy v. Ferguson, the 1896 Supreme Court case that declared racial segregation — "separate but equal" — constitutional was a precedent for 58 years when the court overturned it in Brown v. Board of Education in 1954. Should the Warren court have kept legal segregation in place because they needed to set aside a precedent to end it?

At The Liberal Patriot, Ruy Teixeira looks at recent survey data regarding Hispanic voters. He notes that "most Democrats like to believe that, since a relatively conservative white population is in sharp decline while a presumably liberal nonwhite population keeps growing, the course of social and demographic change should deliver an ever-growing Democratic coalition." But the data shows that Latinos are increasingly a more difficult voting bloc for the Democrats, in which case that belief falls apart. In Virginia, Democrat Terry McAuliffe also underperformed among Black and Asian voters according to precinct-level analysis. Time for the Dems to wake up.

At The Chronicle of Higher Education, Paul Campos argues that university administrators and sports coaches are "robbing us blind." And, he's right. Both groups have convinced the culture that you need a wizard to run the schools and teams, and wizards are expensive. I would counter with something I learned in elementary school: Wizards are make-believe.

Mark Silk, at Religion News Service, dons his Grinch outfit and pens a witty and incisive column about the perils of gift-giving: 'Tis the season to be wary! Splendidly done.

The joyful tidings of Gaudete Sunday continue to reverberate. The same, frolicking exuberance we found Tuesday listening to Bach's "Wachet auf, ruft uns die Stimme" is here found in a hymn that we sing in English as "O Come, Divine Messiah." But good luck finding a good recording of the song in English. Here is the children's choir of St. Ferdinand des Ternes singing it in the original French.