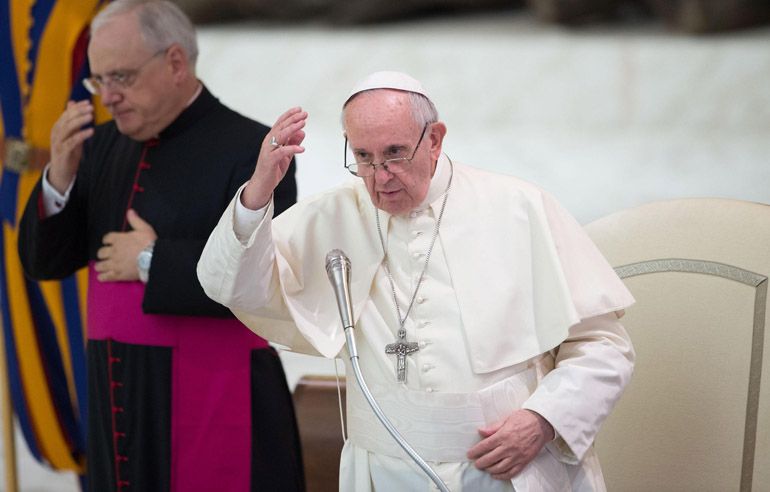 Pope Francis gives a blessing during an audience with participants in Italy's National Liturgical Week in Paul VI hall at the Vatican Aug. 24. (CNS/Giorgio Onorati, EPA)

Pope Francis gave an important address last week to the participants in a National Liturgical Week event in Rome. It is not just what the pope said that is important, but the topic itself, for reasons I will explain.

I do not know what a research assistant to the pope makes per hour, but the Holy Father should give a bonus to the person who found the quote in which Pope Pius X, the formidable foe of "modernism," wrote "it is necessary for many years to pass before this, so to speak, liturgical edifice … [after which it will] reappear again resplendent in its dignity and harmony, once cleansed of the squalor of aging." And he reminded his audience, and us, that Pope Pius XII, no flaming liberal, also advanced the cause of liturgical reform in his day. So, by the time the Second Vatican Council convened, it made sense that the council fathers begin with the draft on liturgy, which would become Sacrosanctum Concilium.

The paragraph that seems to have caused the most controversy is this:

"There is still work to be done today in this direction, in particular in rediscovering the reasons for the decisions made regarding liturgical reform, overcoming unfounded and superficial readings, partial acceptance and practices that distort it. It is not a question of rethinking the reform by reviewing decisions, but rather of knowing better the underlying reasons, also through historical documentation, and of internalizing the inspiring principles and observing the discipline that regulates it. After this teaching, after this long path we can affirm with certainty and magisterial authority that the liturgical reform is irreversible."

Some on the right, such as canonist Ed Peters, complain that this last sentence makes no sense. He thinks it is "confusing to the faithful" because the magisterium only pertains what is divinely revealed or what is "required to safeguard the deposit of faith and thus to be definitively held." And, I can hear some on the left saying "we told you so" and swimming in the warm, and new to them, waters of ultramontinism as detailed by Fr. Robert Imbelli at Crux.

Imbelli does not share the left's attitude towards liturgy, or much else to be sure, but he touches on something important. He quotes Pope Francis, who said in this address, "The liturgy is 'living' on account of the living presence of He 'Who by dying has destroyed our death, and by rising, restored our life'. Without the real presence of the mystery of Christ, there is no liturgical vitality. Just as without a heartbeat there is no human life, without the beating heart of Christ no liturgical action exists. What defines the liturgy is, indeed, the implementation in many signs of the priesthood of Jesus Christ, or rather the offer of His life to the point of opening His arms on the cross, a priesthood made present in a constant way through rites and prayers, most fully in His Body and Blood, but also in the person of the priest, in the proclamation of the Word of God, and in the assembly gathered in prayer in His name." And then Imbelli asks: "How Christologically vital are our liturgies?"

This question transcends any ideological considerations. There are vibrant liturgies in progressive parishes, where multicultural choirs sing beautiful music from different cultures. There are exquisite traditional liturgies where the music of a Palestrina transports the congregation. There are good and poor sermons in churches of all types. There are congregations that are more friendly or less so, again, with no ideological correlation.

But, what makes a liturgy Christologically vital? How well have our parishes done what Pope Francis spoke about in terms of educating our people about the symbolism of, say, the altar itself? At the time the new translation was introduced, many raved and many complained, but how many used the occasion to explain some key facts about our shared Roman rite?

I understand that a primary purpose of the homily is to break open the Word of God that has just been proclaimed. But, there are plenty of readings that would permit a pastor to instruct his flock on why we do what we do when we come to Mass. Why is it that the people pray to Jesus: "Lamb of God, you take away the sins of the world" and "Heaven and earth are filled with your glory," for example, while the priest prays to the Father: "We come to you Father with praise and thanksgiving." What was the role of the people's prayers in resolving the Arian crisis? And, while some churches may have a lecture series on the liturgy, the fact is that the time when a pastor can reach most people is at Mass.

I would add, although it is not exactly on point, that pastors should also find occasion to preach about the meaning of the Creed.

The kerygma that Jesus is the Messiah is a thing so stupendous, it demands a conversion of heart and mind, an ongoing process of conversion, of self-emptying and growing in the awareness that, on account of our baptism, Christ lives in us. The congregation gathered at Mass is the Body of Christ. Do we prepare our liturgies to reflect this? How many times does Mass seem "stupendous"? Music has such power: Do we prepare the music at Mass in such a way that it conveys anything stupendous? Could we not prepare the music in advance, giving out the music in advance, practicing before Mass begins? Does the celebration of our eternal salvation warrant an extra ten or fifteen minutes?

A bit of planning can go a long way. One of my main beefs at my previous parish was that the second collection was taken after Communion. You would still be kneeling, the choir would still be singing, the Blessed Sacrament had not yet been placed in the tabernacle, and there were the ushers sticking the baskets into your face. At one of the churches where I worship now, the second collection follows the first immediately, an improvement. Except that no one alerted the organist to sing all four or five verses of the Offertory hymn. So, while the priest begins the Eucharistic prayer with the words "Pray, my brothers and sisters," people are groping in their wallets and purses for another twenty. Here is an idea: When the collection is being taken, one or more, let the church be in silence, thinking about what it means to sacrifice for something greater, or let there be a soloist or solo organ. When you sing the Offertory hymn, have everyone stand and sing it. Make sure it is a nice transition hymn, connecting the Liturgy of the Word with the Liturgy of the Eucharist. At a funeral, the perfect hymn at this point is "At that First Eucharist" but only if you sing the fourth verse. I have yet to find a Catholic hymnal that includes the fourth verse, so the problem with our liturgy is deeper than any one parish!

A vibrant Christology requires praise, and we human beings praise best when we sing our praise.

A priest friend tells me that his parish has assembled their own hymnal. I applaud this idea. This past Sunday we sang unmemorable, new-fangled words to the hymn tune "Nettleton," which has long been paired with the words "God we praise you, God we bless you, God we name you sovereign Lord." Hard to beat that. So why change it? A similar change of words was made to the venerable hymn "Cwm Rhondda" in the current edition of the Worship Hymnal. What bright light thought they could improve upon "Guide me, O thou great Jehovah, pilgrim through this barren land, I am weak but thou art mighty, hold me with thy pow'rful hand"? My friend's parish gets to sing the old, familiar words not these new banal words. A vibrant Christology requires praise, and we human beings praise best when we sing our praise.

Comparing the time spent on liturgy versus the time spent helping the poor is comparing an apple and an orange. Praising God is the one activity in human life in which all truly are equal and the poor actually have a leg up on the rest of us because the Christian Gospels are good news for the poor, not for the middle class, still less for the upper middle class.

The teaching of the Second Vatican Council on the liturgy, the reform it both reflected and continued, is indeed "irreversible" as the pope said. And it is still being received by the whole church. Reception of a teaching, like reception of Holy Communion, is not a passive act. God's beauty, so evident in Creation and in acts of mercy and in kindnesses large and small, should shine in our liturgies too. There is nothing controversial in saying so.

Make the Catholic Church great again? There's no going back

Your thoughts on reforming the liturgy, part two