Pope Francis calls us all to holiness, for all life 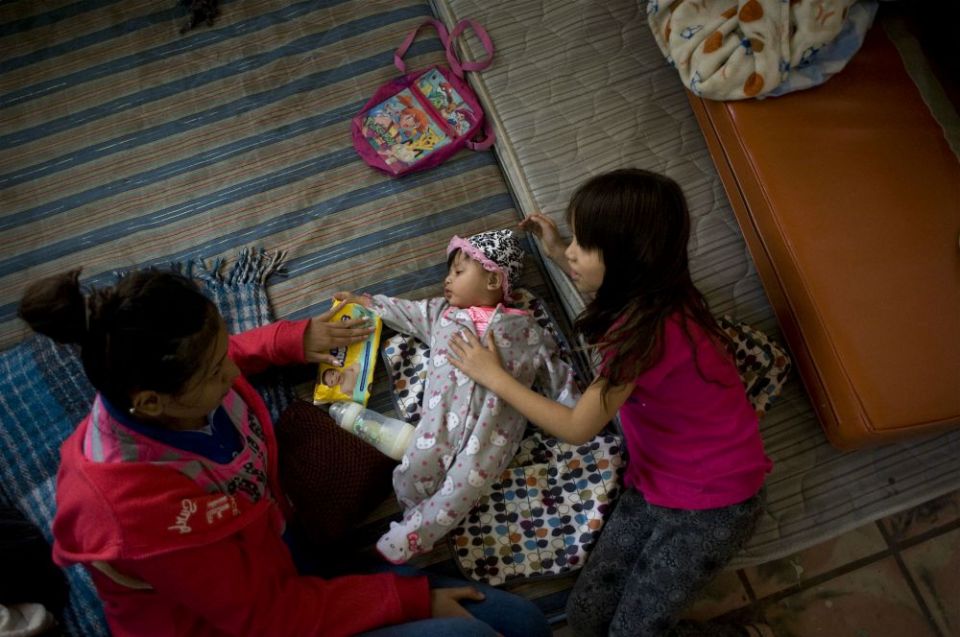 An infant is cared for by her mother at a Catholic migrant shelter supported by Caritas in Tijuana, Mexico, April 24. They are from the Mexican state of Michoacan and fled north with others to the border with the U.S. to seek asylum because of increased violence in southern Mexico. (CNS/David Maung)

Rejoice and be glad, Jesus is calling you to be holy!

Ah, but you might say, "Holiness is for saintly people like the pope." But the pope says holiness is for you and me, and that everyone is called by God "to be holy and blameless before him in love" (Ephesians 1:4).

In his new apostolic exhortation Gaudete et Exsultate ("Rejoice and Be Glad"), Pope Francis reminds us that the Lord has set the bar extremely high for you and me: "He wants us to be saints and not to settle for a bland and mediocre existence."

The Holy Father writes, "The important thing is that each believer discern his or her own path, that they bring out the very best of themselves, the most personal gifts that God has placed in their hearts."

But common to all forms of holiness must be a deep special love for the vulnerable and poor — near and far.

Pope Francis writes that the various miseries experienced by countless human beings should cause Christians to feel "a constant and healthy unease" that should inspire us to deeply pray and tirelessly work to help all those who suffer.

This love must be passionate, consistent and unconditional. It cannot exclude anyone, not even our enemies.

But many Catholics and other Christians think that their one life issue — to the detriment of all other life issues — is the most important one of all. The Holy Father calls this mentality a "harmful ideological error."

Rather than ranking the life issues, Francis links them. He instructs us to see them as essential parts of an integral whole.

He powerfully insists that "Our defense of the innocent unborn, for example, needs to be clear, firm and passionate, for at stake is the dignity of a human life, which is always sacred and demands love for each person, regardless of his or her stage of development. Equally sacred, however, are the lives of the poor, those already born, the destitute, the abandoned and the underprivileged, the vulnerable infirm and elderly exposed to covert euthanasia, the victims of human trafficking, new forms of slavery, and every form of rejection."

Pope Francis is clearly insisting upon what the late courageous Cardinal Joseph Bernardin of Chicago coined "the consistent ethic of life," which calls for the total equal protection of the life and dignity of every human being from conception to natural death, and everyone in between — no exceptions.

Unfortunately, multitudes of Catholics are not committed to this centrally important teaching.

I have encountered many Catholics who are deeply committed to ending abortion, but often have no hesitancy about going to war — which always involves killing countless innocent people.

And on the other hand, I have encountered many deeply committed Catholic peace activists who are indifferent to the war of abortion waged against innocent unborn babies.

But Pope Francis is in neither camp. Rather he is crystal clear that we are not to subjectively rank the life issues, but rather to objectively link them all together.

The resurrecting of this ancient teaching of the early Catholic Church — insisting on absolutely no blood-spilling — is both the most moral and the most logical position to hold. It proclaims to governments, corporations, society and the whole world that no one is expendable! And that each person made in God's image and likeness is to be cherished and protected.

Column | Pope Francis calls us all to holiness, for all life

Are women involved in a toxic relationship with the church?

Gen Z is keeping the faith. Just don't expect to see them at worship.