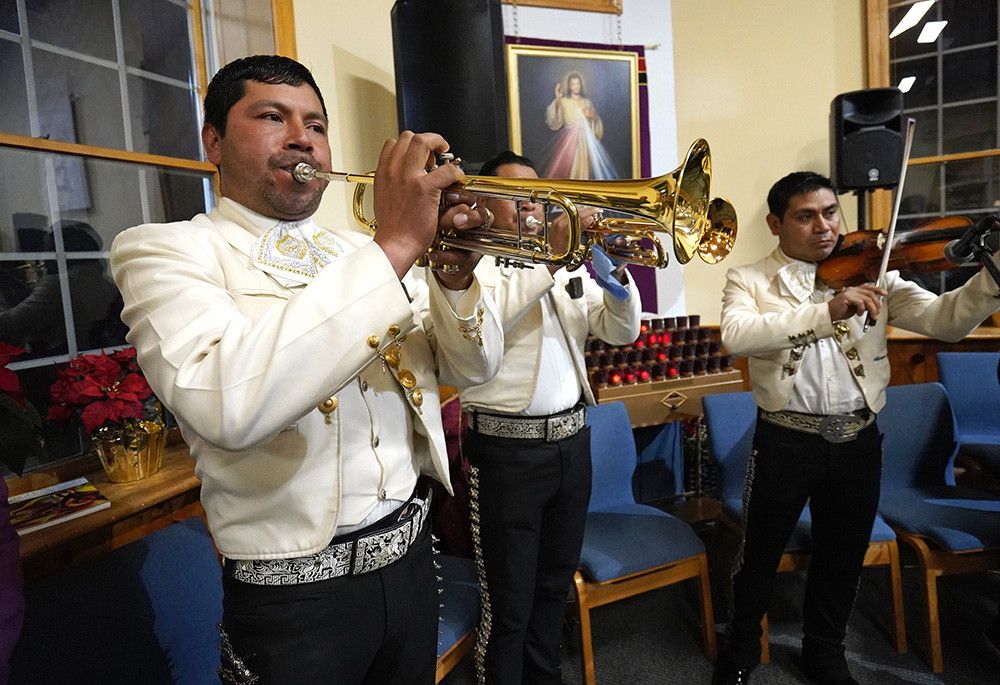 A mariachi band plays music during a Spanish-language Mass marking the feast of Our Lady of Guadalupe at Resurrection Church Dec. 12, 2021, in Farmingville, New York. (CNS/Gregory A. Shemitz)

A mariachi missing some main members barrels into the church parking lot in the corner of the Mojave Desert in Southern California, 20 minutes late for a wedding Mass.

As the eldest member, I push back my embarrassment, climbing the stairs to the choir loft to meet the other two band members, both fresh off having COVID-19 scares with their roommates.

I have been playing during Catholic liturgy since the age of 15 and have been a mariachi just as long. Mariachi music is a genre of Mexican folk music that gained popularity in the 1930s and came to be known as Mexico's signature, traditional music. It usually consists of four or more musicians playing mariachi instruments such as mariachi guitars — the vihuela and guitarrón, though sometimes including a guitarra de gólpe or the standard six (nylon) string guitar — trumpets and violins. There are various subgenres of music within mariachi, and varying instrumentation, with Mexican-style harp being one of the original instruments used, and accordion a recent addition.

Mariachi music began being used in Catholic liturgy post-Second Vatican Council, with "mariachi Masses" springing up throughout Mexico and the United States after the writing of the "Misa Panamericana" Mass music setting.

Though experienced in mariachi liturgical music, I don't consider myself an expert on the use of mariachi music in Mass, but when I asked others with know-how in Catholic liturgical circles in the U.S. Southwestern states about the practice, I received similar responses with two main themes: Mariachi music is beautiful and can aid in Catholic worship with the correct liturgical training for mariachis, but most mariachis need training in this area and there is danger of a lack of reverence.

Pedro Rubalcava was born in my native Imperial County, located on the southeastern tip of California. Imperial County has a population of just over 180,000, but has four mariachi bands, all with varying degrees of musicianship.

Rubalcava, who later moved to Portland, Oregon, where he works for Oregon Catholic Press — one of the largest publishers of Catholic hymnals in the nation — made his start in liturgical music in the now closed Our Lady of Perpetual Help Mission Church in Brawley, California.

Currently director of music development at Oregon Catholic Press, Rubalcava was part of a church music group that played at local parishes in the Imperial Valley — Sombras del Valle. After requests from parishioners and the community for mariachi music in Mass, he wrote liturgical mariachi songs for his home parish, some of which later landed on his Grammy-nominated 1989 album "Amanecer" and subsequent album "Cantemos." 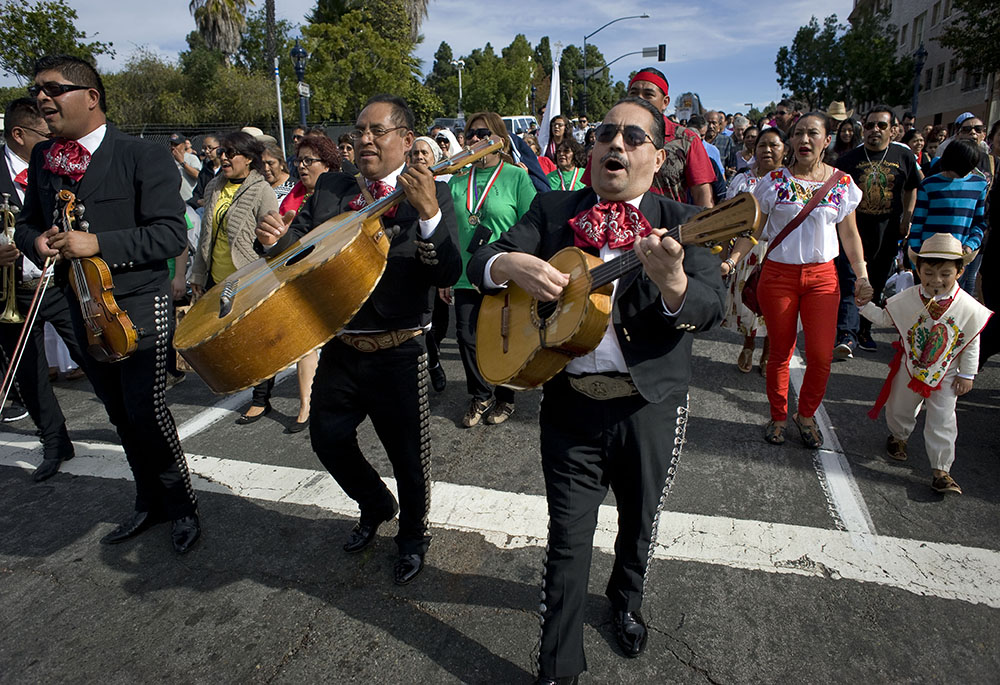 A mariachi group plays during a procession in honor of Our Lady of Guadalupe Dec. 6, 2015, in San Diego. (CNS/David Maung)

Rubalcava said the writing of those mariachi-style songs were not only inspired by the people of the Imperial Valley, but it was "also a way to … get people to play them … and then later when we went to the studio we were able to flush [the music] out more."

Rubalcava said people ask for mariachi music in Catholic Masses because the music can "elevate the nature of the prayer experience for some folks," and also because mariachi has a deep connection to Mexican culture.

"When you think of Mariachi, it's like an orchestra or symphony; it has this grandeur about it," Rubalcava said, "and so people are wanting it to be more than just what you would normally get."

"Mariachi … I think, is what people were looking for when they want music for a big celebration … not just a [church choir], but a bigger sound," he added.

Rubalcava said "Misa Panamericana" has "something unique that people expressed, not only culturally but also in faith, that was near and dear to them, expressed through signs, symbols and sounds that people were familiar with." 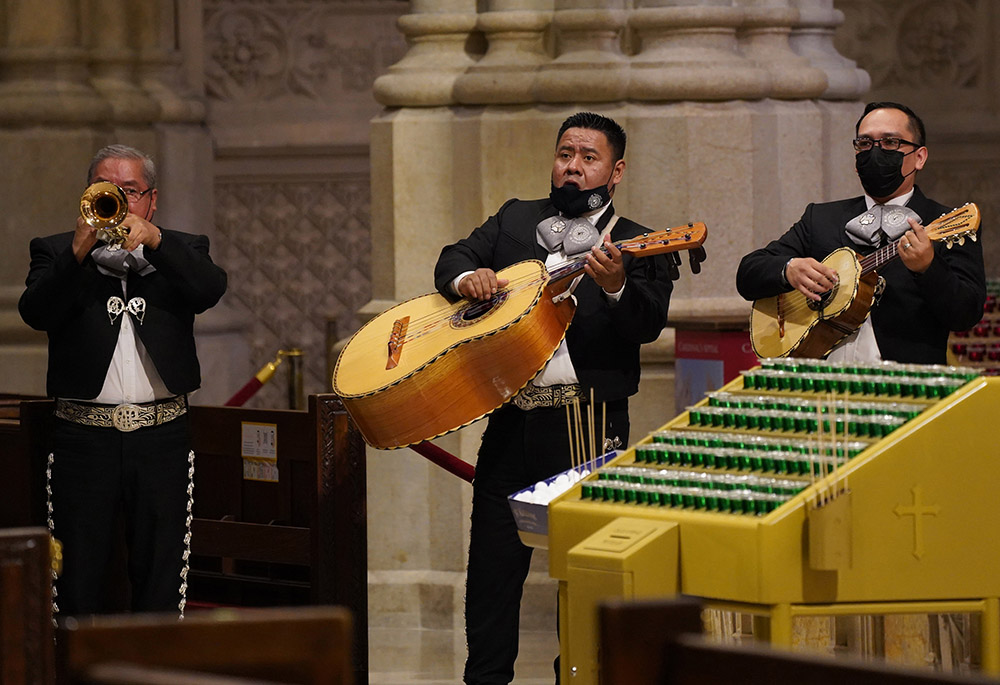 A mariachi band provides music for a July 11, 2020, prayer service at St. Patrick's Cathedral in New York City during which New York Cardinal Timothy Dolan blessed the cremated remains of 250 Mexicans who had died from COVID-19. (CNS/Gregory A. Shemitz)

Francisco Morales is the leader of Mariachi de la Basilica de San Juan del Valle, in San Juan, Texas. His church-only mariachi ensemble plays music in an average of six Masses each weekend, with big church feasts like Christmas or Easter upping it to eight Masses.

Morales — originally from Tantoyuca, Veracruz, Mexico — said churchgoers have told him when mariachi music in Mass is sung and played well, it "elevates them on another level closer to God" and "it's not just Hispanic people who are coming to the mariachi Masses."

"Sometimes we've had people that go to a mariachi Mass and it catches their interest to start coming back to Mass more regularly," Morales said of the feedback he's gotten from new or returning churchgoers. "These are people that haven't gone to a Catholic Church in years."

"We've even heard of a person just exercising, jogging by the church, who heard the music and came in to hear it," he said. "She wrote us a letter and now comes to Mass every day. There are a lot of situations like that."

Carlos Zapién, director of music of St. Augustine Cathedral in Tucson, Arizona, and a recording artist agreed, saying "as a cultural thing, the mariachi Mass is doing quite well."

"[The mariachis] pick appropriate music," Zapién, who studied in the University of Music and the Performing Arts at Stuttgart, Germany, said. "Both clergy and laity are happy interacting with the mariachis and listening to their music in the liturgy."

At St. Augustine Cathedral, Zapién said the 8 a.m. mariachi Mass on Sundays is served by local mariachis to the area who play the music on a rotating schedule, but he also said the cathedral does not let just any mariachi band play there.

The cathedral asks the mariachi bands to provide them with a list of music they will be using, and suggests appropriate music selections for Catholic liturgy.

"Sometimes they think that because a song talks about Jesus that it's Catholic and it's not always, it can be a Protestant type of music, so yes it's a challenge," he said. "That's why we try to get mariachis who are willing to comply with the rules that the liturgy asks for to be liturgically appropriate."

In addition, Zapién said some people may go to the mariachi Mass because "they think the mariachi is going to perform, and sometimes the liturgy can take a second place, and that can be dangerous."

"The mariachi needs to understand that they are performing but it's not a performance; it's a participation in the context of the liturgy," Zapién said. "In the liturgy we celebrate the sacrifice of our Lord Jesus Christ, music enhances the beauty of the liturgy, but it should not hijack it."

"It's a conversation the pastor and the mariachi has to have," he said. 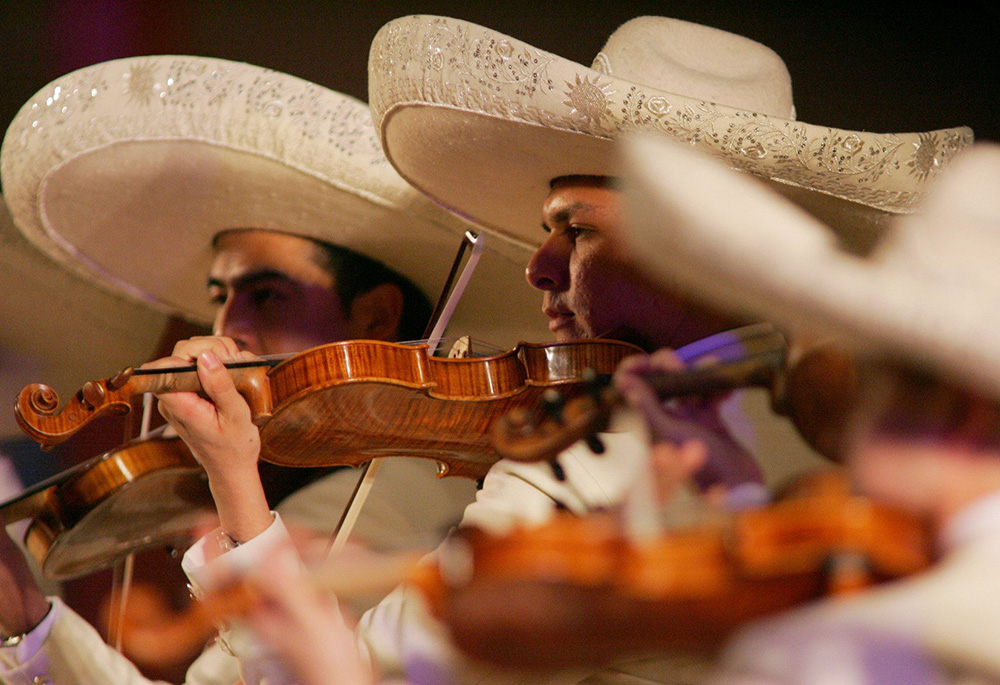 Mariachis Sol de Mexico perform during a program honoring Our Lady of Guadalupe at the Cathedral of Our Lady of the Angels Dec. 11, 2005, in downtown Los Angeles. (CNS/Greg Tarczynski)

Joe Baca — a devout Catholic and violinist for the world renowned Mariachi Cobre — agreed, saying there are some pitfalls with mariachis playing music in Mass.

Baca, who attended a Catholic high school in El Paso, Texas, and played in mariachi groups while growing up, said one of the problems with mariachis playing liturgical music, unless the mariachi regularly plays music in Mass, is that "50 to 80% of any mariachi coming to play in a church are not devout Catholics."

"These people don't have any experience, typically, with liturgical music at all," he said, adding that he's witnessed a lot of irreverent behavior. "If you go to a typical parish, even those music directors might not be trained that well in that regard, but they're going to have continuing education and [liturgy] conferences that they go to, whereas a mariachi might not be trained in that at all."

Baca admits he didn't understand the liturgy, nor the need for reverence of being in the presence of Christ on the altar when he was younger, but as he became older, he had a "reversion experience" that deepened his Catholic faith.

Baca said he now sees the need for mariachis to be more reverent and respectful during the liturgy and in their behavior during the Mass itself.

In my own personal experience, most mariachi directors I've seen are "cradle Catholics" but not practicing Catholics. Even if they are practicing Catholics and/or have been trained in music, most have not been trained in liturgy, or only trained to their regional experience rather than what it means to be part of and operate within the rules of a global universal, i.e., Catholic, church.

"There's some sort of disconnect there when it comes to mariachis and having them understand what they're actually doing," Baca said. "I don't know if it's a cultural weakening when it comes to the Catholic faith and the Hispanic culture."

"The culture, a lot of times, can overrun the actual truth in a lot of ways." he said. "It's a phenomenon that's taken root and it has issues because you can't guarantee that that band respects or understands the liturgy at all, when you really get down to it."

Baca said it's "so important" for mariachis to be "legitimately respecting the liturgy," adding that "it's going to depend on the priest how far he's going to let the ball roll when it comes to music ministry."

"It's liturgy, it's divine," Baca said. "It's not supposed to be taken advantage of by a cultural phenomenon that can be deemed more important than the sacrifice itself."

The experts, and I, are not saying every mariachi who plays in a Catholic Mass doesn't know what they're doing, but rather every mariachi band is different.

"I think you're going to find different experiences and different reactions wherever you go," Rubalcava said. "There was a lot of formation that was still needed in decades past, and I think those are some of the tensions that still exist."

"The star is Jesus Christ, that's the star," Rubalcava added, "and so the best mariachis that I have seen lead worship have that very much in mind."