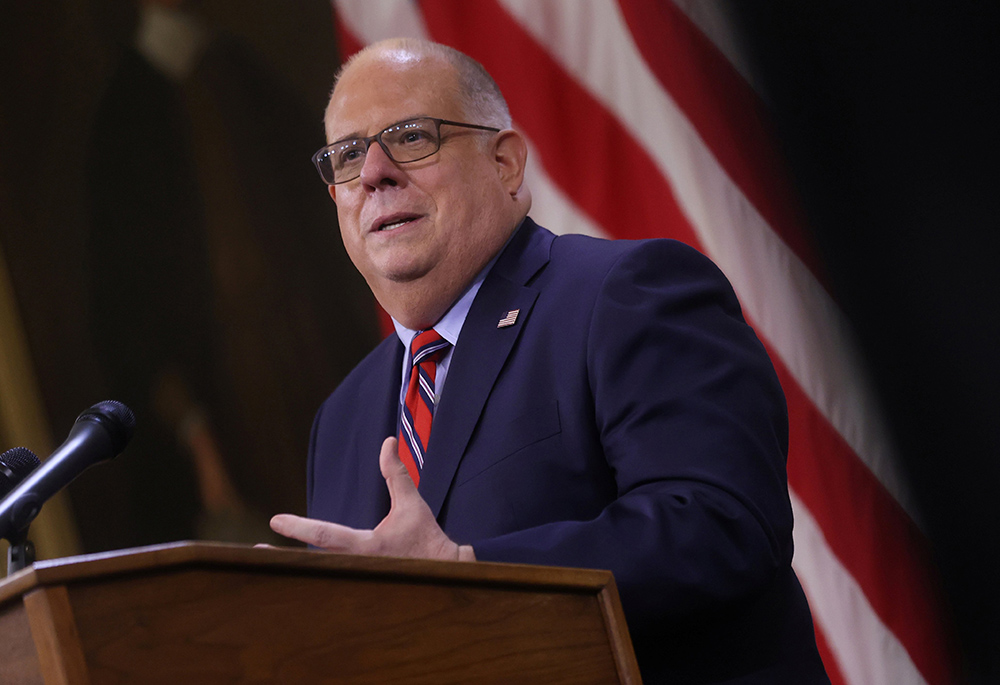 A drama played out recently in Maryland that holds significance for the next presidential election cycle while also highlighting the ever-shrinking role of Catholic witness in the public square as it becomes a casualty of the culture wars.

The production, in development for years, reached its denouement when the majority Democratic legislature passed on to Republican Gov. Larry Hogan a raft of liberal bills. They included one that provides for an expansion of abortion services and providers throughout the state. Hogan vetoed all of them.

In describing the legislative face-off over abortion, The Washington Post duly noted that Hogan — distinctly moderate as Republicans go these days, having declared former President Donald Trump "toxic" for party and country — is a Catholic who previously was able to avoid the abortion issue by declaring it "settled law" in Maryland.

But Democrats unsettled the law with the new bill that provides for expansion of abortion services into two-thirds of counties where it is currently unavailable and expanding the range of health workers able to provide abortions. 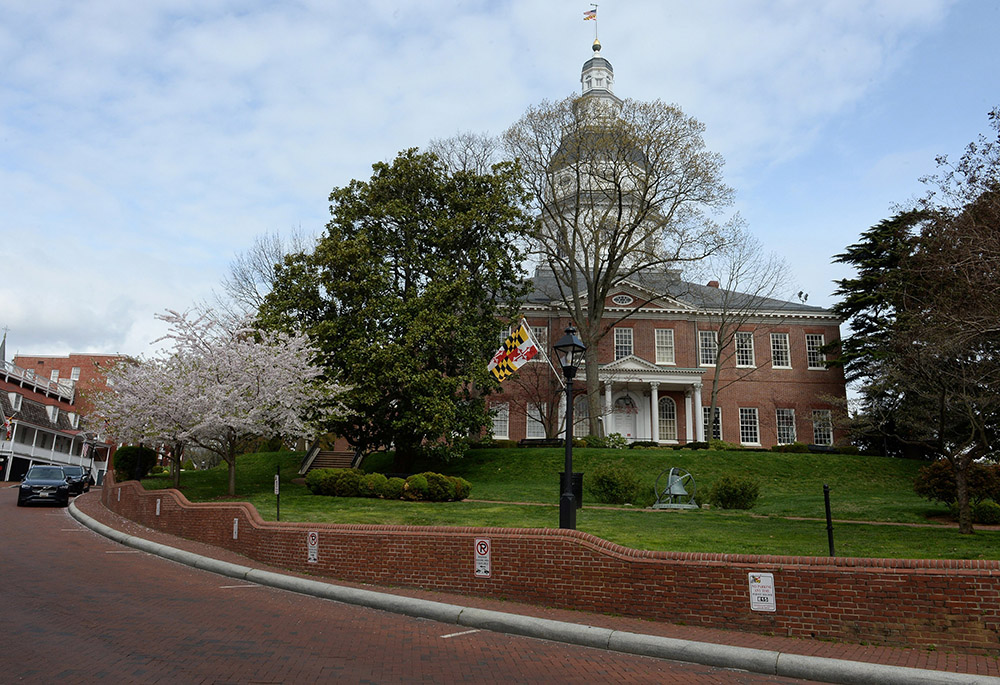 What is telling — and predictive of things to come — is that the abortion bill was the only one the Post connected to Hogan's Catholicism as problematic.

The term-limited governor displayed his Catholic bona fides, as the culture wars go, on the veto of the abortion bill. But he also sought to satisfy his Republican base should he, as expected, run for president in 2024. He did that by vetoing other bills including some "that would have created a state paid family leave program, bolstered unions and forced firearm dealers to adopt specific security measures," according to the Post.

On none of those counts did the Post reference the social justice teaching of Hogan's faith — a consistent ethic of life that proceeds from womb to tomb — or what it might have required of him. Not a question was raised. Perhaps the ideal is to leave denominational associations out of the reporting altogether. But once raised, it is not unreasonable to expect a consistent accounting.

Such narrow perception of Catholic obligation to the common good represents a triumph of the culture warriors who have succeeded in whittling the church's robust social justice tradition to a few legislative items. 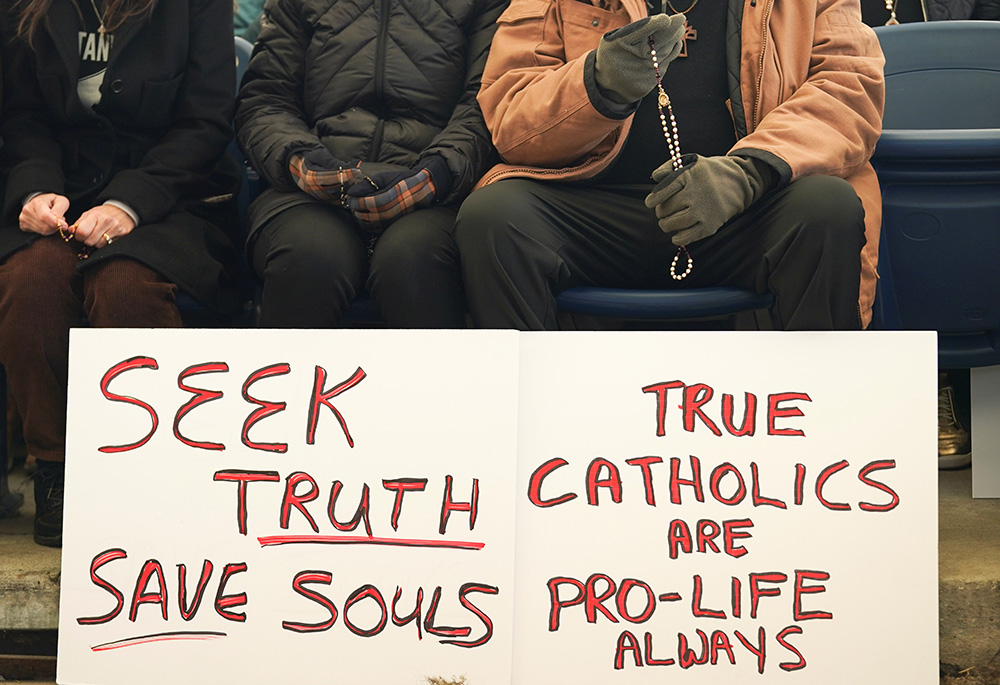 A pro-life sign is seen Nov. 16, 2021, in Baltimore, during a Church Militant rally. (CNS/Reuters/Kevin Lamarque)

The circumstance provides a real-life example of what theologian M. Therese Lysaught outlined in a remarkably deep and comprehensive lecture delivered recently to a gathering of invited U.S. hierarchy and laity in Chicago. In that address, "Reclaiming the Catholic moral and intellectual tradition from the culture wars," she referenced Jesus' Sabbath healing of a man with a withered hand. The act enraged some civic and religious authorities of his day. It was, she said, a precursor event showing "distorting culture war dynamics already at play":

Between Jesus and the religious traditionalists, sitting on the margins, is the man with a withered hand. He is a concrete, embodied person — probably a poor person — who has long been in need of a healing intervention. But the authoritative champions of traditions have no interest in healing him. Rather, across the synagogue invisibly stretches the law — a wire for Jesus to trip over as he moves to heal the man.

Likewise, in the U.S. for the past 40 years, the culture warriors have positioned the "pro-life" witness as a tripwire separating the church from most policy efforts designed to assist those with withered hands. Purporting to defend "life" from conception to "natural death," the culture warriors focus on a narrow array of actions — almost exclusively legislative efforts — aimed at prohibiting a select set of issues.

Multiple forces are responsible for this narrowing of Catholic social witness in the public square, but two stand out. The first is the influence that "Catho-capitalists," in Lysaught's term, have come to exert over the Catholic narrative. Their influence has been amply documented in these pages.

They have used their considerable resources — and considerable ability to raise even more — to promote a version of Catholicism that wraps itself as a thin veneer around an economic libertarianism that more often than not is in stark contradiction to the church's social justice teachings.

The second force responsible for the current Catholic predicament is the U.S. hierarchy, which, in concert with the culture warriors and their narrow take on social justice, has walked the institutional church into a single-issue political corner from which there is no easy escape. The strategy provides politicians cheap admission to official Catholic favor. It also guarantees, given the expectation that Roe v. Wade will be overturned, that the coffers of the lobbyists on either side of the issue will continue to bulge as they battle into the future on at the state level.

Political parties aren't religious congregations. No party should be granted religious endorsement. Doing so, we've seen, allows Republicans to simply ignore major portions of Catholic social teaching. Democrats, in turn, have little reason to even consider the more moderate opinions on abortion that the largest segment of Americans have held over decades.

This cleaving of issues to suit political ends is antithetical to church teaching which, if it is going to be proclaimed as proof of worthiness in the public square, has to include the whole range. In his 2018 apostolic exhortation Gaudete et Exsultate, Pope Francis makes an unambiguous and passionate plea for defense of "innocent unborn." 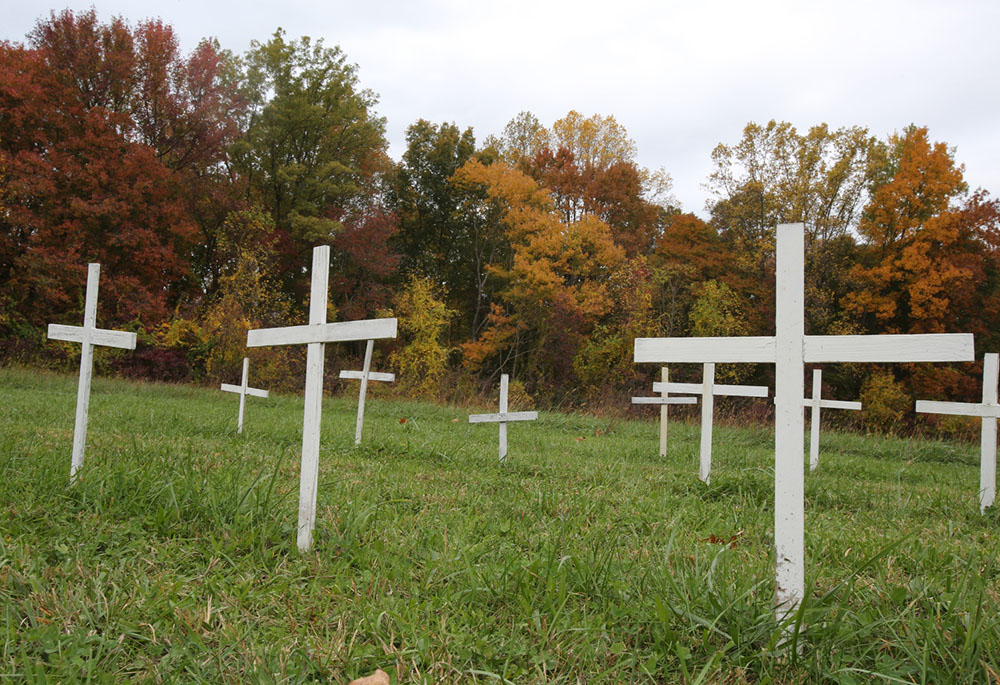 Crosses against a backdrop of fall colors are seen near Jesus the Divine Word Church Oct. 29, 2014, in Huntingtown, Maryland. The crosses represent aborted babies. (CNS/Bob Roller)

In the same paragraph, however, he writes: "Equally sacred, however, are the lives of the poor, those already born, the destitute, the abandoned and the underprivileged, the vulnerable infirm and elderly exposed to covert euthanasia, the victims of human trafficking, new forms of slavery, and every form of rejection."

Term-limited Gov. Hogan was able to check off the pro-life box, a valuable item to display for evangelicals and Catholics in the primaries should he pursue higher office.

The Democrats easily overturned his vetoes. "Beginning in 2025," according to the Post report, "Maryland workers will be able to take up to 12 weeks of paid leave to care for a sick family member, a newborn or a new adopted child, among other instances." Maryland firearms dealers will also have to comply with new safety regulations, and public defenders will be allowed to form a union.

Who gets to wear the "I'm Pro-life" button?

A version of this story appeared in the April 29-May 12, 2022 print issue under the headline: Maryland vetoes show Catholic witness is victim to culture war.