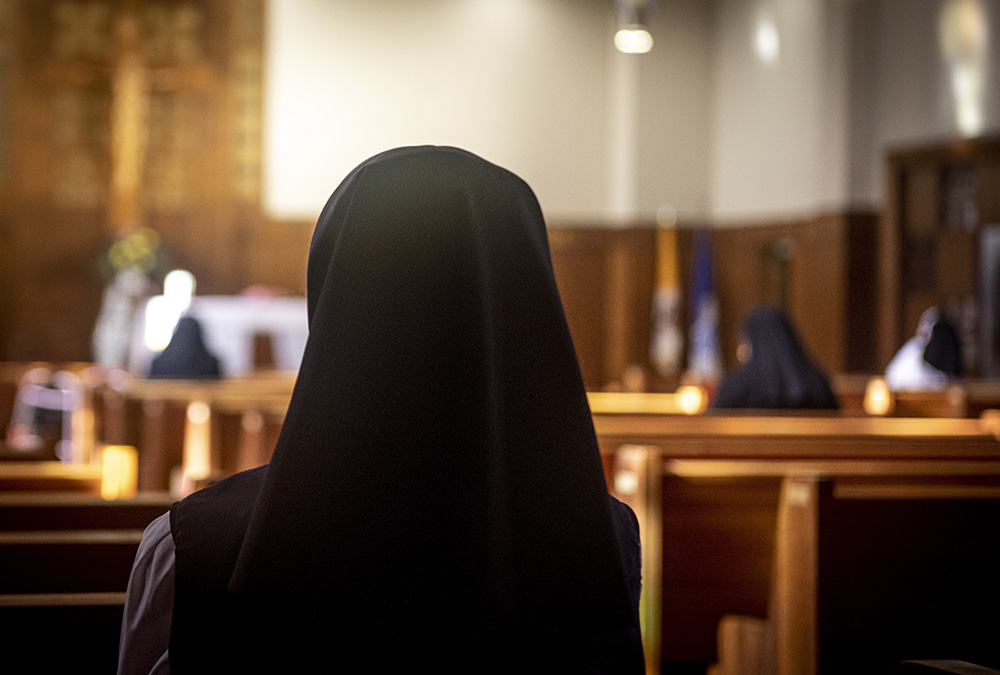 A woman religious attends Mass in the chapel of the motherhouse of the Oblate Sisters of Providence near Baltimore Feb. 9. (CNS/Chaz Muth)

Editor's note: This column has been adapted from Benedictine Sr. Joan Chittister's 2018 book What Are You Looking For?: Seeking the God Who is Seeking You, published by Paulist Press. Chittister is currently on a speaking tour in Australia in preparation for the Plenary Council on the synod on synodality.

It is one thing to watch the world change around us. It is entirely another to deal with the fact that our changing world is changing us, too. We have found ourselves in a world of possibilities. We have also discovered, then, the ways in which choice entraps us.

One woman, for example, agonized with the idea that she herself had given a lot of thought over the years to entering a monastery, but why go?

"Why commit myself to a religious community with so much uncertainty if, as a layperson, I can develop my spiritual life anywhere? I can develop a spiritual community anywhere. I can practice deep meaningful spirituality in any community of lay or religious people, can't I?" she went on. "I can practice financial and social independence and, more than that, I can put my money where I want it to go. And what's more, develop important relationships — maybe even meet the right man."

And then, with a sigh ... "Isn't it enough to be a serious layperson and live a good life? Isn't that really the same thing?"

The questions are serious ones. Important ones. They are exactly the questions every religious must face and answer. And my own personal answer to them is "Right. You can certainly do all of that in the married or the single state. And by all means, if that's what you know you want, do it."

There is no other foolproof answer.

The truth is that everyone goes through the tangle of it all. In fact, must. Me, too.

I was about 30 when it hit me. Was this the place I really wanted to be? Should I be thinking of starting a family? The tension between the two plagued me for months. I could imagine a family; I simply could not imagine myself out of the rhythm of the monastery. It was all the parts of it that grabbed me: the communal parts, the professional parts, the social parts, the spiritual dimensions of the life that carried me from one day to another every single day.

The fact I came to understand is that I am simply "this kind of person." The magnet in me pointed to the prayer life, the life of prophetic witness, the life of the conscious spiritual relationship with God and the world that God created. With the apostle Peter, the only answer that rang over and over again in my head when I asked myself if I should leave was "Lord, to whom shall I go?" And no answer came back because the answer was already here.

Clearly, those questions are not equations to be worked out. They cannot be determined by any number of scientific studies. They are not a matter of genetics. "Religious" types range from people as unalike as St. Frances of Rome and St. Teresa of Ávila, as St. Dominic and Trappist Fr. Thomas Merton, as St. John of the Cross and Dorothy Day. There is, in other words, no such thing as a religious personality "type." Just as there is no way to really know, at least at first, if you are the type who could be called to enter a religious order yourself.

Instead, the answer is disarming for its simplicity. If giving yourself to a life that is deeply contemplative and at the same time unstintingly active feels like the fullness of life to you, then you must give these questions serious attention.

If the lifestyle you are looking for is a call to change the world, there are 1,500 years of history to prove that religious lifestyle has done just that again and again.

The call to courage and single-minded service is not a call to leave the world, it is a call to change the world. So "step right up." 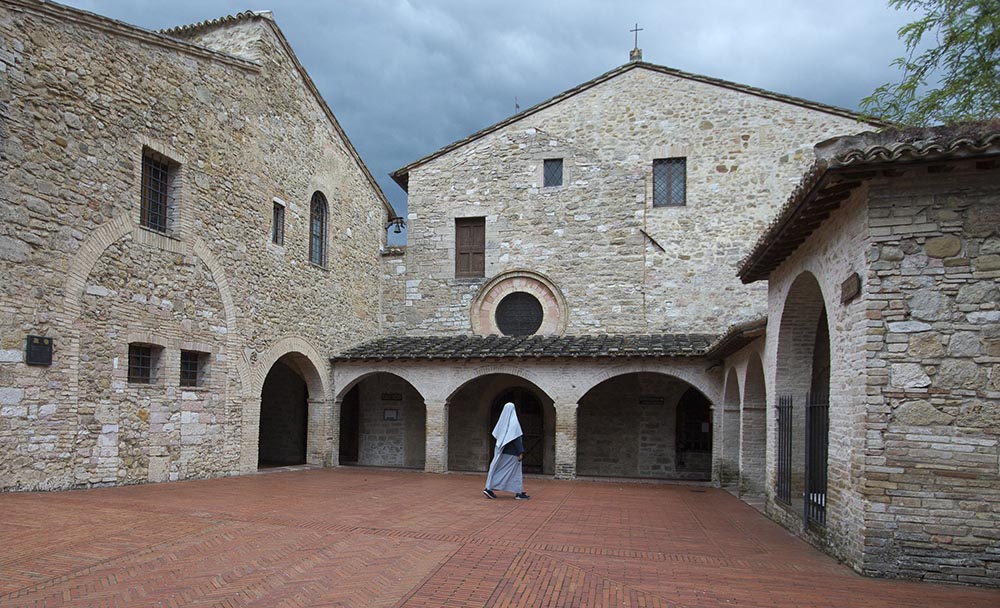 A nun walks the courtyard at the church and convent of San Damiano in Assisi, Italy. (CNS/Octavio Duran)

This is the lifestyle that began in Bethlehem and ends on the road to Emmaus with all the disciples before us fanning out "doing good as Jesus did." Just as we are meant to do.

The Scriptures are clear: We were all meant to "minister" to someone, somewhere, somehow. But, in the end, it's all a matter of where we fit, what we love, and what we're made for that will determine how well we do it.

Religious life starts in the heart and soul and mind of the seeker. It becomes the light within them that witnesses to the God who is with us in the midst of darkness as well as in the jumble of the mundane. It is a charismatic life. Or, as the disciples of an earlier time asked the old monastic, "Holy One, what's the difference between knowledge and enlightenment?" And the Holy One replied, "When you have knowledge, you light a torch to find the way. When you have enlightenment, you become a torch to show the way."

The truth is that people join religious communities in order to be able to do together what they cannot possibly do alone. Religious life gives a person a tried spiritual tradition to trust in. It gives models along the way to grow into. It gives the support we need on the days we falter on the path or in the work or at the center of the heart. Just as everyone does everywhere at some time or another.

More than that, in community we each become part of the great anonymous voice that cries out as one for the poor, for the oppressed, for the invisible, for the lost, for the ones with no one to care for them. In fact, who alone would have the strength for it?

That task cannot be done alone. In community life, the single voice is amplified, is raised to the power of hundreds.

One thing we know: Religious life existed from the earliest moments of the early Christian community and will surely go on long after ourselves. How can we be sure? Because in every tradition at all times, spiritual people have risen up to carry that torch. 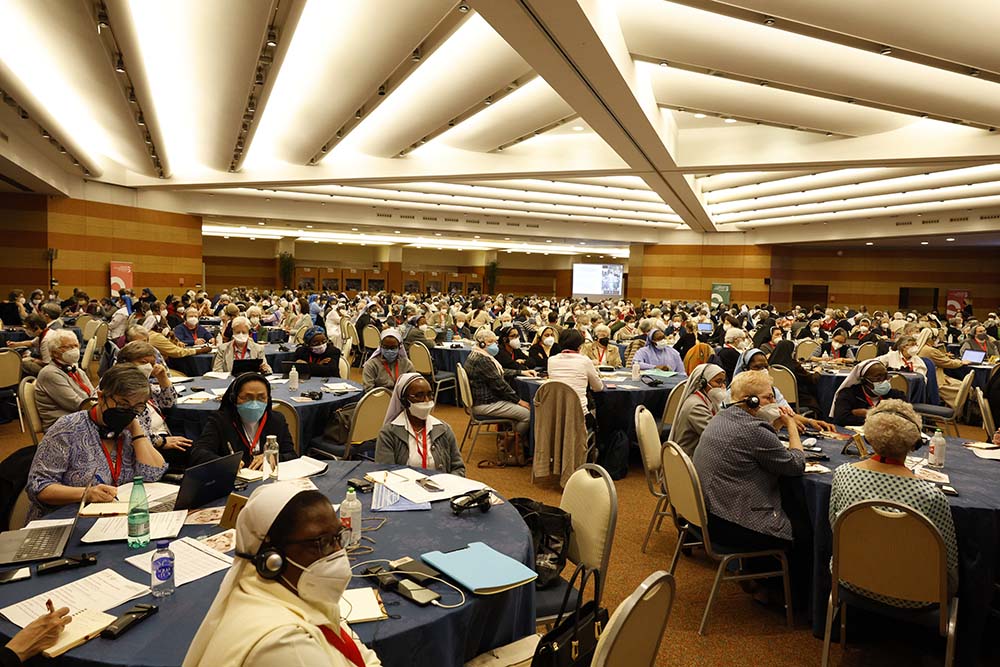 Superiors of women's religious orders meet for the plenary assembly of the International Union of Superior Generals in Rome May 3. More than 500 superiors were in attendance, with more than 100 participating online. (CNS/Paul Haring)

The earliest known groups of women dedicated to the pursuit of the God-life in the Christian tradition were called the "Order of Widows." In an era when women had no agency, they took agency of their own souls. If nothing else, they were an early sign of the call of women to a special role in the Christian dispensation.

Since then, for each of almost 20 centuries, men and women religious have been the pulse and heartbeat of the church. They have stood in the center of every community, another sign, a different kind of sign to keep alive the model of Jesus. They have been the voice for the oppressed and reminders of the ongoing presence of God with us in the here and now.

They were the living memory of Jesus walking through time. Our time. Calling the world to see what is missing for many if God's will for us all is to be as real for others as it is for us.

From where I stand, it is as if in every era the spiritual guardians of that century handed on a torch to the next, saying as each group waxed and waned, "Carry on. Be the light. Show the way. Companion the lonely. Succor the sick. Console the suffering. Uphold the lowly." Until this life melts into the next and compassion has flowered into eternal consolation.

Clearly, religious life is actually dedicated to spiritual development and the coming of the reign of God. Not that others do not also do that, but because for religious it is the singular reason to exist. It is about modeling what it means to go on co-creating what God gave us to finish.

And we all must do it. In every possible way:

Religious life is the story of those who go through the world holding the Scriptures in one hand and their newspaper and community office book in the other. Why? Because this, they have decided, is their whole life. There is nothing else to which they have been called.

And that is precisely why I, like them, decided that religious life was the only life that was really right for me.

A version of this story appeared in the July 8-21, 2022 print issue under the headline: Me? Be a sister? You're not serious..