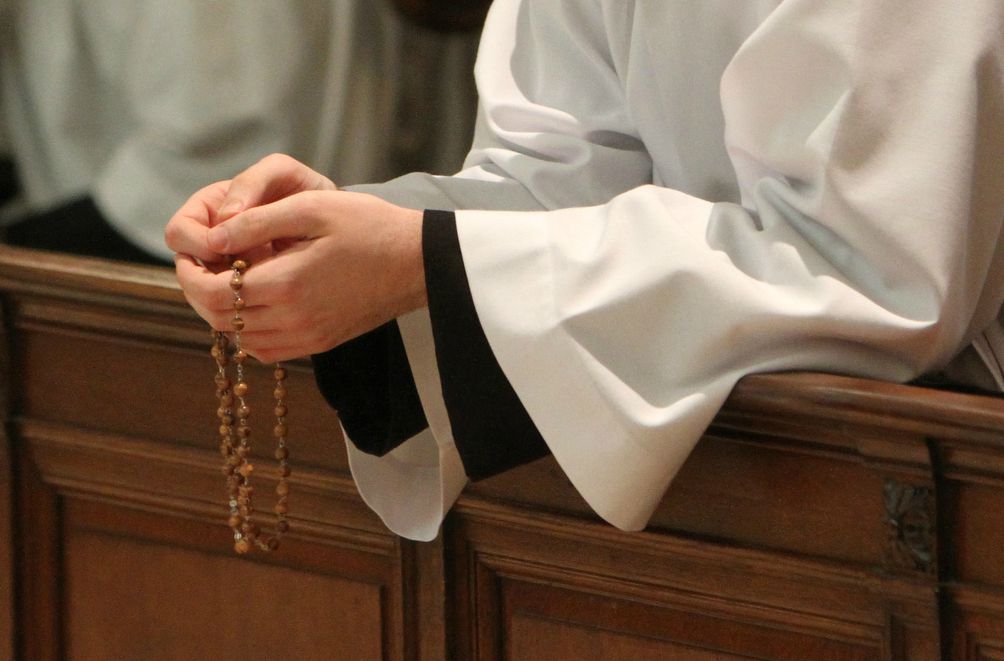 A seminarian prays the rosary in 2014. (CNS/Gregory A. Shemitz)

Editor's note: Last week, Melinda Henneberger, a public Catholic and writer, described her decision to leave the church amid ongoing revelations of the clergy sex abuse scandal and coverup, and what she was hearing about it.

It was one of the most-read pieces on our website. Among the many responses was the one below from Fr. David Knight. Both are smart and thoughtful (and quite witty) explorations of the "To leave or stay?" question increasingly on the minds of Catholics disgusted with the scandal and the inability of church leaders to deal with it at a depth that begins to restore trust.

We've invited NCR members by separate email to continue the discussion, and we'll report on those opinions at a later date. If you're not a member and would like to become one and join the discussion, you can do so here. You'll get an email early next week with instructions on how to send us your thoughts on the issue.

Melinda, I read your article in NCR just when an intellectual friend was disagreeing with my proposition that more people left the church because of boring Masses than because of child abuse. She and her husband, both highly educated, deeply involved Catholics, had both felt inclined to leave the church because of the recurring scandals, although they never would.

My response was, "But you are intellectual people. You couldn't leave for a reason like that. It is totally illogical!"

Related: Why I left the church, and what I'm hearing about it

You are obviously intellectual, too, but in your article I found no one telling you that you are illogical. So I want to ask how in the world a person with your education could possibly leave the church for such an unreasonable reason. In the kind of people who vote for Donald Trump, it is understandable. Not in you.

It seems obvious that, for whatever reason, God has repeatedly chosen shockingly sinful people to be his public instruments. Moses was a murderer. King David was a rapist who murdered a loyal officer to cover up his adultery. One Scripture scholar described him as "an over-sexed bandit." King Solomon's wives led him into idolatry. And Peter, the first pope, had more sins and errors than anyone mentioned in the Gospels, with a right-to-wrong ratio of three to nine, and one split decision. He gave the right answer to the same question twice, when he confessed Jesus to be the Messiah (Matthew 16:16 and John 6:68), and he said he loved Jesus (John 21:15). Every other time he opened his mouth, he put his foot in it:

Even after the Resurrection and Pentecost, Peter had the same faults. When God himself told him in a vision to eat non-kosher food, he refused (Acts 10:11). And he could still play the coward. Paul accused him of hypocrisy to his face because, as pope, he was afraid to stand up against the Pharisee party in the church (Galatians 2:11).

But this was the man to whom Jesus gave the keys of the kingdom of heaven, and whom he chose to be the "rock" upon which he would build his church. Is there a message in here somewhere that we need to look at?

Jesus "emptied himself, taking the form of a slave, being born in human likeness" (Philippians 2:7) — not just when he took flesh from Mary, but even more so when he took flesh in us, making our sinful bodies his body. Now Jesus is saying, "If you cannot love me in my ugly body, the church, you cannot love me at all." To reject the sinful body of Jesus that is his church is to reject Jesus.

Ultimately, it is to reject the whole human race.

Look at how illogical your position is. Is the church today worse than it was at the time of the Inquisition, when we tortured and burned people at the stake for alleged heresy? Are we worse now than we were at that time of the Protestant Reformation? Should every African-American give up on the church because we accepted slavery, and then segregation? Even the priests and nuns had slaves. Should every parent whose child is killed by Catholics in war leave the church because the bishops aren't emphatic enough about condemning it?

At least be consistent. If you leave the church of the child abusers, you are leaving the Church of Francis of Assisi, Benedict, Dominic, Ignatius and Óscar Romero. You are giving up fellowship with Catherine of Siena, Teresa of Avila, the steel-sweet little Thérèse of Lisieux, Edith Stein, and Dorothy Day. You are refusing to gather at Mass, to be in the same church building with them and with the poor, the peons and the persecuted who find their refuge in the house of God. With whom will you gather? Have you found a sinless church? And if you do find one, how long will it stay that way?

How logical is the person you quote who "worked for 12 years hoping to help eradicate clerical felonies and the hierarch's [sic] insensitivity to the suffering they have caused," and "left finally, discouraged [because they weren't] willing to listen to us, the People of God"? If all the prophets to whom the hierarchy wouldn't listen gave up, how many saints would we have? Should NCR stop publishing just because the bishops don't subscribe?

Look at the good side. Is there any church, even any organization, that supports an instrument of self-criticism as insistent and incisive as the National Catholic Reporter? (Editors, leave this in; you didn't throw yourselves this bouquet, I did). Truth eventually wins in the church. Pope John Paul II supported the sex-fiend Marcial Maciel of the Legionaries of Christ more than he supported Óscar Romero. Had you left during his papacy, you would not have been part of the church that eventually condemned Maciel to a life of penance and canonized Romero. How much sense would that make?

You are illogical when you say "that the faith will always be part of me makes calling myself an 'ex' seem like that's a lie I'm telling myself. It's like moving to a new country." We call those who move to new countries "expats." Those who leave the Catholic community are ex-Catholics. Jesus did not just teach an abstract way of truth. He founded a community. St. Paul called it his body, and an invisible body sounds like a contradiction in terms. I have no doubt you are in the "state of grace," enjoying the divine light, life, and love of God and neighbor, like my Baptist father, my Methodist grandfather, my Campbellite (Christian Church) grandmother, and my other, Quaker, grandfather. But you are an ex-Catholic as they were non-Catholics, because ecclesia means "gathering," and you no longer gather with us. It is about as logical for you to leave the church now as it was for the founders of all those other religions to leave it when they did.

I understand those who find it emotionally impossible to be a part of the Catholic Church. My brother is an agnostic because the God we were taught was a monster who sent people to hell for all eternity if they missed Mass on a single Sunday. He lived in terror of God and probably had to deny him to keep his sanity. I tell him that when he dies God will say, "If you had believed in the God you thought I was, that would have been blasphemy. So welcome to the house of your Father!" And I understand victims of sexual abuse by priests who cannot stand to be in a church with one or take part in the service over which a priest presides. But logic does not come into play with them. They are blocked by insuperable emotion, as those Jews would be who saw their wives and children marched into the gas chamber by German soldiers who had just been singing Christmas carols. Experiences like that can't be handled with logic.

It can be dangerous to speak reasonably to people under stress. I learned that when I told a Spanish-speaking woman in the hospital not to feel too bad that her baby had died, because the baby was in heaven. She cussed me out in Spanish words I never heard before or since — and she should have. I never made that mistake again.

But you do not come across as a victim. You seem to be dealing with this intellectually. And all I can say is that you are probably not guilty of sin, unless it is a sin for people with brains and education not to use them. There's a story of someone who was asked, when he left the church, if he was going to become a Protestant. He answered, "I've lost my faith, not my reason."*

What I hear you saying is, "I've lost my reason, not my faith."

Could this be your personal version of the "dark night of the soul," when nothing human seems to support our faith? The purpose of the dark night is to let us experience our faith as divine by holding on to it when all the human reasons for doing so just don't mean anything anymore. We see the logic in them, but they just don't affect us.

When that happens, the only advice anyone can give us is, "Hang in there!" Then we come to understand on a deeper level what faith is.

[Fr. David Knight has been a priest for 57 years, 45 of them in the Diocese of Memphis. The author of numerous books, he is a retired pastor who now stays busy with speaking engagements and running retreats throughout the country. His website is immersedinchrist.org.]

*This article has been edited to remove a quote misattribution.

A version of this story appeared in the Jan 11-24, 2019 print issue under the headline: Memo to Henneberger: The logical thing is to 'hang in there'.