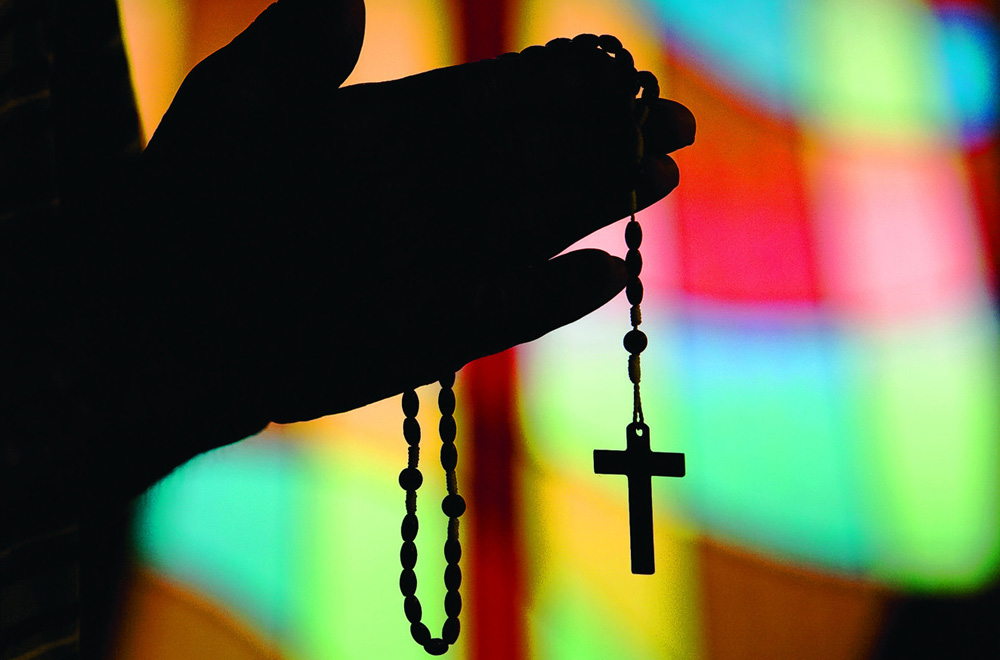 A parishioner prays the rosary in late July near a stained-glass window in this 2010 file photo (CNS/Dave Crenshaw, Eastern Oklahoma Catholic)

After so many years of trying to "stay and fight" for the Catholic Church as it should be, the day finally came when walking away wasn't so much a decision as an acknowledgement of reality: I just couldn't continue to help prop up an institution that I've loved my whole life, but that's run by men who, after all this time, are dithering still in response to the devastation done by child abusers in collars.

Staying "because it's our church, too" had come to feel like complicity by another name. And even staying for the Eucharist made me wonder at what point I had to stop letting the hierarchy use the real presence to excuse the inexcusable. Does Jesus ever feel he's being held hostage?

I don't pretend to know the answer. But I do know I had started to feel I had more than I wanted to have in common with the many Trump supporters who tell pollsters there's nothing the president could do to alienate them. Faith in a man and in a religion are very different, obviously. But if inaction in the face of new reports that child rapists are still being protected wasn't my cue to exit, what would be? That no one can make that call for anyone else should be obvious, but it's not.

The response to the USA Today column I wrote about leaving — or being left, really — was overwhelming in itself. I heard from two bishops, many of the priests still living that I'd known all the way back to St. Mary's Elementary School and just about every Catholic stop in my life since, including from my time as a young Holy Cross Associate lay volunteer right after the University of Notre Dame, and from the Vatican, which I covered for The New York Times at the height of the scandals in 2002 and 2003.

A lot of my friends said they were sad, and a lot of strangers said I was doing Satan's work, or must not love Jesus very much. (You'd be surprised how many Catholics seem to think the only road to Christ runs through Rome.)

Ross Douthat wrote in The New York Times that I was making a "terrible mistake." In another of the six columns on the subject of my exodus — all of them arguing against — a writer for The Federalist accused me of the heresy of Donatism. Reading it made me suspect that he was mostly excited to know what Donatism is. And never have I been more aware of the kernel of truth in that Donald M. Murray essay, "All Writing Is Autobiography."

There was also some unintentional comic relief, as from the Notre Dame alum who wrote in a letter, "A Notre Dame Grad giving up on the church? How dare you! ... Have fun in Hell."

Related: Why I'm not leaving the Catholic Church

But for every "forgive her, for she knows not what she does," there were many more heartfelt letters from Catholics across the country who said they'd come to the same conclusion, or were "hanging on by a thread." One woman said that after a lifetime of being made to feel "less than" because she was pregnant when she and her husband married, she'd been outraged to learn that some of the very men who had "made me out to be the gravest of sinners" had done "unspeakable things to children and got excused, hidden and moved."

Many of those who wrote work in Catholic parishes or organizations, or used to. "I have lost a great part of my identity," after becoming disillusioned, said a man who'd spent his entire working life raising money for the church.

"I worked for 12 years with the Voice of the Faithful," said another, "hoping to help eradicate clerical felonies and the hierarch's insensitivity to the suffering they have caused. I left finally, discouraged that they would even be willing to listen to us, the People of God."

A pastoral associate in a parish wrote, "There's not a day that goes by that I don't ask myself, 'What I am doing? Am I doing good work here? Is God using me here? Or am I helping to prop up an institution that is ultimately unredeemable?' "

One that probably made me smile more than it should have came from a mother of five in North Carolina. "Please don't let the sons of bitches get the last word," she said, then signed off, "With sincere love in Christ."

Another affecting and very different message, from a seminarian in Tulsa, said, "The Church, my beloved Church, is on fire, and I will not run away; I will run into the building, giving my entire life, to build up the Church and to spread the Gospel of Jesus Christ. I invite you to do the same, to be the change!"

Among those who said they themselves had been abused by a priest was an inmate on death row who still wonders what happened to "the little Cuban boy" Father also took into the church basement.

Some who said they're on the verge of leaving over the spiritually wearing, cumulative impact of the abuse scandals, too, are priests themselves. One is both a priest and a victim of clerical abuse who said he's been targeted throughout his priesthood.

It's since there are so many of us on this road to points unknown that I thought I'd write periodically about what comes now — even though the short answer at this point is that I have no idea. Why would I, when the Catholic Church is the only spiritual home I've ever known, and a former Catholic is not anything I ever really thought I'd be?

For that matter, is "former" even the right way to put it? "Recovering Catholic" is both too dismissive for me and too medicalizing, especially when I'm pretty sure it's much of the hierarchy who should be in treatment. That the faith will always be part of me makes calling myself an "ex" seem like that's a lie I'm telling myself.

It's like moving to a new country, but without knowing which one. Maybe one where I know the language? When some well-intentioned person told me about an Episcopal church near me that's so large I could go there and be totally anonymous, I thought, well if I wanted to worship where no one ever spoke to me, I'd stay Catholic!

Of course I will check out our closest cousins, though I have to confess that I laughed a little too hard years ago when an editor told me he was a lapsed Episcopalian, "and that's like falling out of a first-story window."

The prospect of starting over after a lifetime is so daunting that I can see why many who leave the Catholic Church just give up on organized religion altogether. I need a faith community, though, and will have to find one.

My friend Michael Sean Winters says he knows I'll be back, "because you don't want to settle for a cracker and some grape juice, now do you?"

I don't, but without overdramatizing, it feels a little like when I had cancer and the doctors kept telling me this was my journey, and everything that happened now would be up to me. Oh, except that "none of the above" wasn't an option. Life as usual was not on the table, then or now.

[Melinda Henneberger is an opinion writer for The Kansas City Star. She previously worked as a columnist for USA Today and served as a visiting fellow at the Catholic University of America's Institute for Policy Research and Catholic Studies.]

A version of this story appeared in the Jan 11-24, 2019 print issue under the headline: Why I left the church.