Bishop Joseph Strickland of Tyler, Texas, speaks from the floor during the fall general assembly of the U.S. Conference of Catholic Bishops Nov. 11, 2019, in Baltimore. (CNS/Bob Roller)

Regrettably, more in sadness than in anger and with a heavy heart, it is time for another installment of Catholics Behaving Badly.

You would think that there would be nothing EWTN host Raymond Arroyo could say that would shock me, but he has. Arroyo and Fox news host Laura Ingraham rolled out a segment on the latter's prime time show called "Positively Boosted" in which they call attention to people who have been vaccinated but still get COVID-19. Last Monday, she noted that General Mark Milley, chairman of the Joint Chiefs, had tested positive, as had Marine Corps Commandant David Berger. Arroyo piped in to add Vatican Secretary of State Pietro Parolin's name to the list. He added that Parolin had "just dropped a vaccine mandate on Vatican employees."

Bad enough that the two smug commentators seem to take delight in the news that other human beings have been afflicted with a virus that has already killed millions. The more insidious part of these segments is that they are suggesting the vaccine does not protect people from getting the virus, and so vaccine mandates are nonsensical. San Francisco Archbishop Salvatore Cordileone made a similar, false connection when he disclosed that he was not vaccinated, saying the vaccines are "not really vaccines." Yes, archbishop, they are.

It is shocking that prominent Catholics would traffic in this kind of misinformation. Study after study shows that the likelihood of a severe infection declines with even one vaccine shot, more with two, and much, much more with a third booster shot. 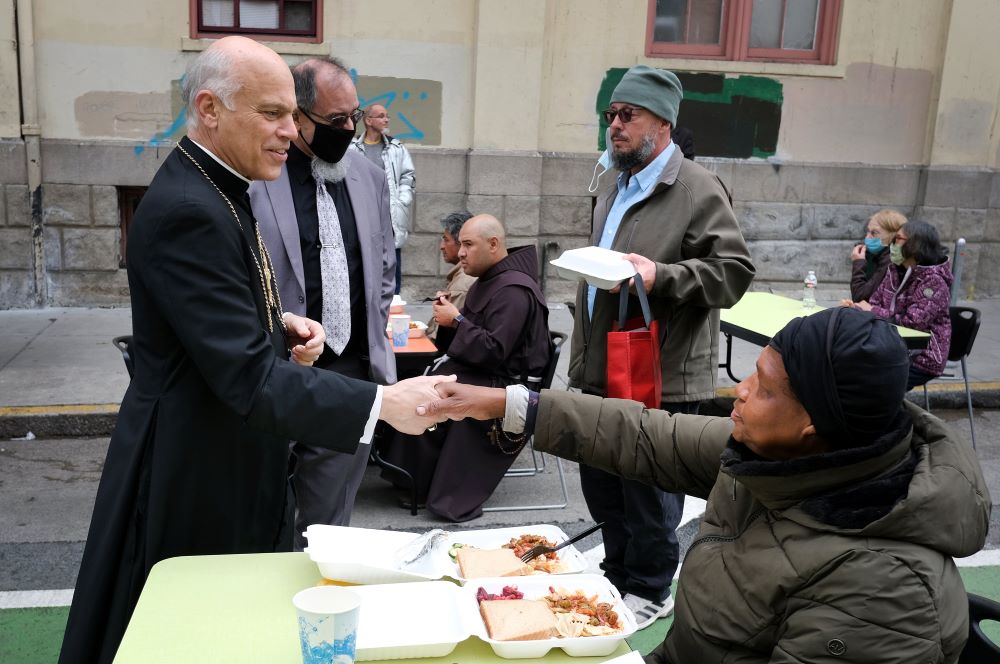 Surely Arroyo, Cordileone and Ingraham also have seen the countless stories about hospitals in many places reaching capacity due to the omicron variant. Encouraging vaccinations and especially boosters is the only proven way to reduce pressure on our hospital system so that people with other ailments are not turned away due to the massive influx of omicron patients.

Instead, the trio, all of whom self-identify as pro-life, would have you think only of your own right to do what you want with your own body. Hmmm. My body, my choice. Where have I heard that before?

The unvaccinated Cordileone made news recently when he led the annual celebration of the "Mass of the Americas" in omicron-overrun New York City. Watching the video, it appeared that no more than a quarter of the attendees were masked, and none of the ministers and acolytes, including Cordileone. The Mass was celebrated ad orientem, and in Latin, but it was the Novus Ordo and I wish to at least commend Cordileone for the shift. It is a step in the right direction.

Previously, the "Mass of the Americas" was celebrated in the Tridentine rite or, as they like to call it, the Traditional Latin Mass, or TLM. There is no ostensible reason that binds the anti-vaxxers to those who, like Cordileone, experience TLM-attraction. Then again, neither position has much to do with reason, just as Trumpian politics is not really about politics. All three are about attitude, striking a pose, performative.

Fr. Peter Williams of Holy Family Parish in Springfield, Vermont, has also refused to get vaccinated, and has even defied his bishop's authority to require vaccination and/or mandatory masking and testing.

"Because he [the bishop] made it a matter of honor and obedience, I quickly responded to him saying that I would not," Williams said in a video posted at YouTube. "He got back to me and said that I had 14 days to comply or he would suspend me."

Kudos to Bishop Coyne. And I hope Coyne checks where this priest studied moral theology. (Hint: It's Christendom College!)

Watch the video in full, however. The priest indicates he approaches these issues as a patriot. Huh? I guess he stopped reading at "Render unto Caesar." And, if you really want to be horrified, check out the comments. So many badly behaving Catholics in one spot!

How did I learn about Fr. Williams and his patriotic abandonment of his promise to be obedient to his bishop? From Bishop Joseph Strickland's Twitter feed of course. The Bishop of Tyler, Texas tweeted out support for Williams: "Please pray for this priest & so many others caught up in similar situations. Pray that priests & bishops may be drawn close to the Sacred Heart of Jesus Christ Our Lord. Living close to His Heart in the Eucharist is our greatest hope for peace & Justice."

What "similar situations" does Strickland have in mind? Other examples of junk science, faux patriotism and presbyteral disobedience?

That is not likely, seeing as Strickland had, the previous day, tweeted out support for another renegade priest. In Chicago, Fr. Anthony Bus published a letter he had written to Auxiliary Bishop Robert Lombardo complaining about Cardinal Blase Cupich who objected when Bus removed the altar of sacrifice from his church, in violation of the archdiocesan norms.

Fr. Bus made disparaging remarks about the Holy Father too: "Many faithful Catholics are being cruelly demoralized — thrown into confusion, which is something the Pope admittedly takes joy in, and are purposefully being pushed to the fringe."

Cruel? Confusion? This persecution complex for entitled clergy is getting a bit rich.

Not for Strickland. "I've re-read Fr Bus's letter and I see nothing disrespectful in his tone or in his actual words," the bishop from Texas tweeted. "It is a heartfelt cry from a priest who is hurting deeply & speaks for many, many others. He should be comforted rather than being disciplined."

Should he? I wonder why it did not occur to Cardinal Cupich to call Strickland and ask his advice about how to handle this priest who thinks he is persecuted and who likes facing the wall when he prays.

Cardinal Ouellet: Call your office. It is time for an apostolic visitation to Bishop Strickland. If he wants to be crazy in East Texas, who is to stop him? But commenting on how other bishops should deal with their priests? Who does that? What does he know about these situations?

The license plates in the Vatican all start with SCV – Stato della Città del Vaticano. But the joke is the letters really stand for Se Christo videsse - If Christ could see! Looking at all these Catholics behaving badly, we know that if he is watching from his throne in heaven, then the shortest of all Bible verses is likely operative: "Jesus wept."