Don't cede the rosary to the alt-right 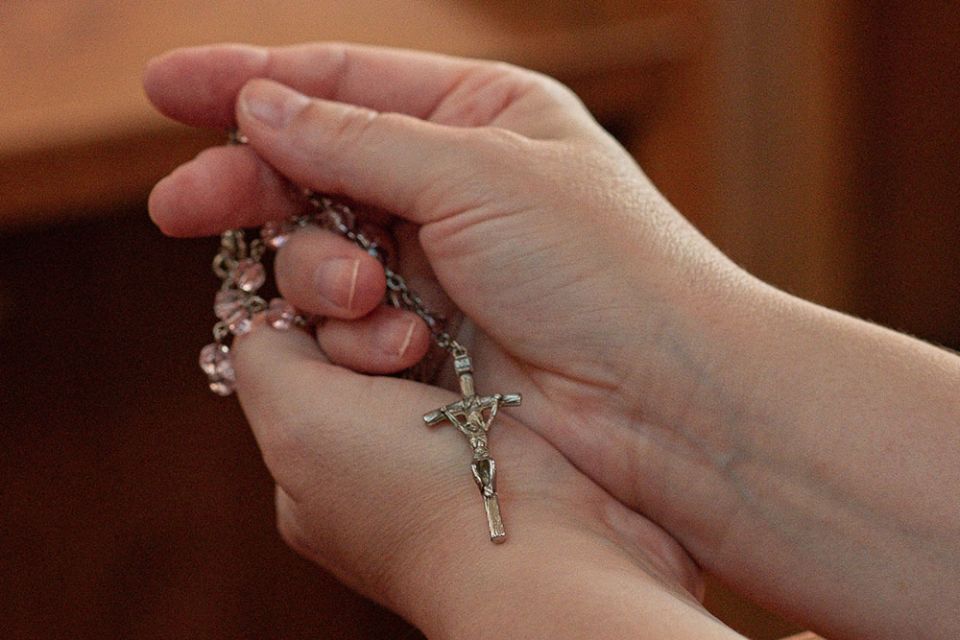 It's not often that the word "rosary" trends on Twitter. But last week after the Atlantic published a piece about "How Extremist Gun Culture Is Trying to Co-opt the Rosary," reactions to the essay went viral.

In it, Daniel Panneton, a Toronto-based historian and writer, argued that for some radical-traditional ("rad-trad") Catholics, the rosary has acquired a militaristic meaning and become associated with the recent — and dangerously violent — rise in Christian nationalism in the United States.

"On this extremist fringe, rosary beads have been woven into a conspiratorial politics and absolutist gun culture," Panneton writes. "These armed radical traditionalists have taken up a spiritual notion that the rosary can be a weapon in the fight against evil and turned it into something dangerously literal."

He makes a pretty solid case, linking to social media and merchandizing sites that connect rosaries to violence in ways that I'm pretty sure the Mother of God would not endorse. A concealed carry permit for your combat rosary? Pictures of saints carrying automatic weapons? Mary, help us!

Although Catholics with connections to violent extremism on the right represent a minority of the U.S. church — even a minority, though a growing and increasingly visible portion, of conservatives in the church — it's hard to argue that such connections between prayer and the glamorization of violence are not problematic.

But too many Catholics seemed more concerned that this writer pointed out such connections than they are about the connections themselves.

For example, Alejandro Bermudez, executive director of the EWTN-owned ACI Group, called the article "rubbish" in a tweet.

Don't care about @DBPanneton -a guy with no bio and 800 followers- rambling about the "connection" between the Rosary and people hating him for being gay. Weirdos are all over the place. But what justification has @TheAtlantic to publish this rubbish?https://t.co/2HA0mXrFL1

Phil Lawler at the Catholic Culture blog accused Panneton of making a non sequitur leap and insisted that the author's real motivation is that "custodians of liberal ideology cannot tolerate resistance, and so the rad-trads must be defeated, banished, isolated."

But it was Bishop Robert Barron of Winona, Minnesota, who got the most press from pushing back against the Atlantic article. In video comments that were picked up by Fox News, Barron "schooled" the magazine for its "colossally stupid" article, although he admits from the outset that "I guess there are perhaps some weirdos on the extreme right that associate the rosary with their rifles." He also admits that such associations are gross misinterpretations of what "spiritual warfare" is — also a point accurately made by the Atlantic article.

Eventually, Barron pulls out the old Catholic League strategy, that anything negative written about the church or even a group of Catholics is "anti-Catholicism," and he throws in the term "wokeism" for good measure.

Clearly, this has all touched a nerve. And it should.

It is true that some left-leaning Catholics, often of a certain generation, tended to eschew devotions that they saw as old-fashioned or backward, especially when those practices morphed into uses that didn't fit with Vatican II theology. For example, it makes sense that the council's emphasis on the Mass as a community celebration led to a decline in people individually praying the rosary while ignoring what was happening on the altar.

But it's a mistake to associate traditional devotions only with traditionalist or conservative Catholics, fringe or not.

I grew up in the burlap-banner-making 1970s but still learned traditional Catholic prayers, including the rosary. I own several and pray it regularly, though often on my fingers while driving. My sister is more diligent than I in praying several decades daily, and she had her children memorize the Memorare, as it is my dad's favorite prayer. Neither of us could be described as "traditionalist Catholics."

The rhythmic, repetitive recitation of the Hail Marys calms my mind and, whether using beads or my fingers, also engages my body as I enter into contemplation with the Divine. At least one academic study has found that repetitive recitation of Hail Marys in Latin, like yoga mantras, slowed and synchronized cardiovascular rhythms, leading to positive psychological and possibly physiological effects.

For me, praying the rosary (or any prayer) is not a form of "spiritual warfare," even though I recognize that existence of evil and certainly pray that my loved ones and the world be safe from it. I just find it incongruous to use militant metaphors about enemies while praying, "as we forgive those who trespass against us."

Catholics are not required to pray the rosary, or to participate in any individual devotion, although throughout history these practices have certainly enriched believers' practice of the faith. One benefit of the ethnic diversity of the U.S. church created by immigration is a chance for exposure to and possible adoption of devotions we might never otherwise have known about.

But it's possible for a devotional practice to be misused, and I, for one, thank The Atlantic for pointing out how some Catholics are doing that with the rosary.

According to one report, rosaries were flying off the shelves after publication of the Atlantic piece, in part because at least one rosary seller saw an opportunity to market to "rad-trads" with a 20% discount.

But it would be a mistake to cede the rosary to rad-trads. I think I'll pray a decade or two about that.

A version of this story appeared in the Sept 2-15, 2022 print issue under the headline: Don't cede the rosary to the alt-right .

Column | Don't cede the rosary to the alt-right

I won't pray the rosary the same way again