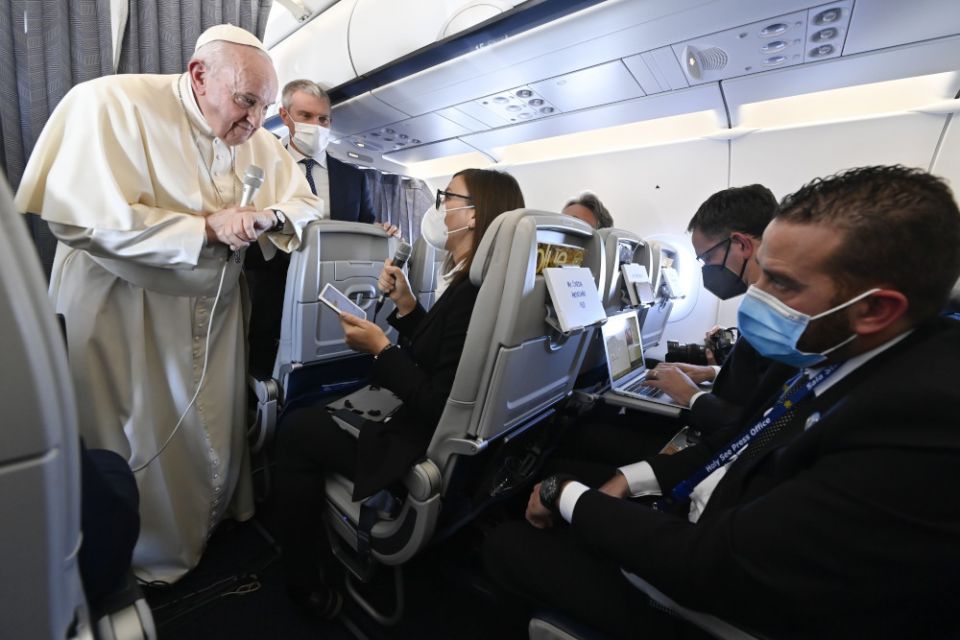 In the summer of 1964, when NCR co-founder Robert Hoyt was making the case for a Catholic newspaper independent of church control, he distributed a flyer re-printing a treatise on freedom of the Catholic press by theologian and Jesuit Fr. John Courtney Murray.

Murray argued that any "well-ordered society" — secular or religious — requires unfettered access to what's really going on. And that, of course, requires freedom for journalists to dig up the truth and share it with readers without fear of censorship or sanction.

"The church for all her differences (from) civil society remains a society," Murray wrote. "And the societal character of the church creates a public right to information about all that concerns the church."

Were Hoyt in search of a foundational document for NCR, EarthBeat and Global Sisters Report these days, I believe he'd be drawn to the remarks Pope Francis made to a gathering of reporters at the Vatican on Nov. 13.

"Your mission is to explain the world, to make it less obscure, to make those who live in it less afraid of it and look at others with greater awareness, and also with more confidence," the pope said.

Expressing gratitude for the work journalists do to keep the world connected to reality, he added: "I also thank you for what you tell us about what goes wrong in the church, for helping us not to sweep it under the carpet, and for the voice you have given to the victims of abuse: thank you for this."

Noting that "the risk, as you well know, is to be overwhelmed by the news instead of being able to make sense of it," he added: "This is why I encourage you to preserve and cultivate that sense of mission. … And I will do so with three verbs that I believe characterize good journalism: listen, investigate and report."

Those are excellent words for any journalist to live by, religious or otherwise. They raise some key questions, beginning with: Listen to whom?

NCR executive editor Heidi Schlumpf and her team have paid special attention to that question over the course of 2021, doing their best to ensure that we're listening particularly well to people on the margins.

Opinion editor Olga Segura has been reaching out to an increasingly diverse group of writers for commentary as well as pop culture, an area she also directs.

Melissa Cedillo joined us for a one-year fellowship with our new Latino Catholics Project, which involves coverage of Hispanic and Latinx Catholics as well as research, analysis and engagement outreach. 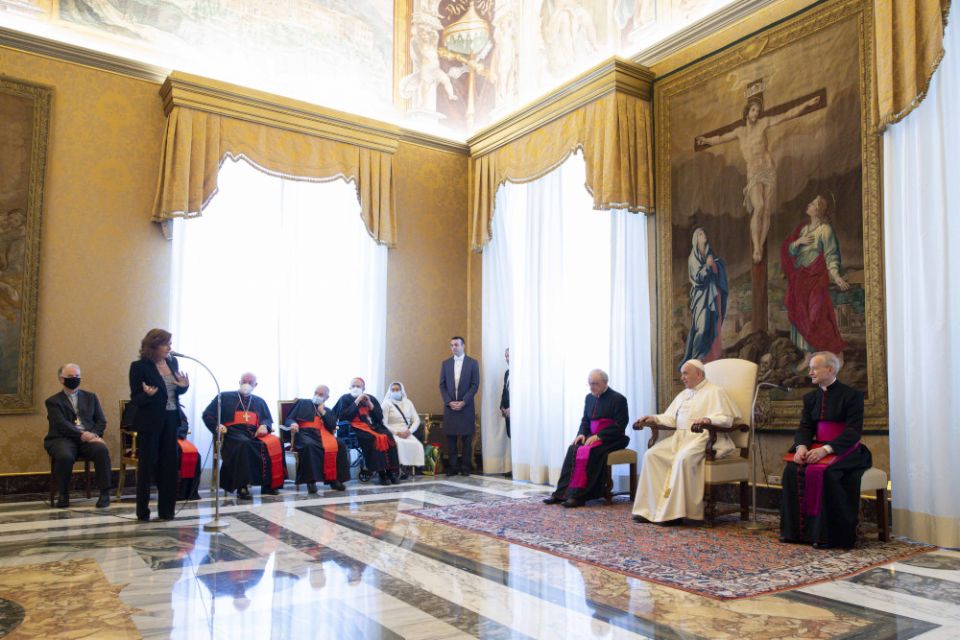 Pope Francis listens as Valentina Alazrak of Televisa speaks during a ceremony to honor Alazrak and journalist Philip Pullella of Reuters in the Apostolic Palace at the Vatican Oct. 13, 2021. (CNS/Vatican Media)

The pope noted that listening is also an imperative for the church, "at all times and especially now that the synodal process has begun." An example of listening by a church official emerged in this account of the communications director of the Vatican's synod office apologizing for removing an LGBTQ video from the office website.

This year's selection of the Catholic Newsmaker of the Year required a lot of all three verbs recommended by Francis.

In the spirit of not flinching from what's gone wrong in the church, the editorial team concluded that the failed leadership of the president of the U.S. Conference of Catholic Bishops, Los Angeles Archbishop José Gomez, rendered him the leading Catholic newsmaker of 2021. At the same time, the editors held up the example of environmental activist Sharon Lavigne, along with other activists, as the sort of leaders — and newsmakers — the church needs more of.

As we plan our work for the year ahead, we welcome your suggestions for how we might deliver more powerfully on the pope's three-verb challenge.

Whom would you like us to spend more time listening to in 2022? Might you tip us off to a situation that could use some investigation? An untold story we should report?

Just as important, are there ways NCR could better serve communities you value?

As much as we receive more ideas than we have resources to pursue, we always appreciate suggestions from the NCR community and do our best to follow up.

So please send them my way at bmitchell@ncronline.org. If you're a fan of Francis, the comic strip, we'll enter you in a drawing to have cartoonist Pat Marrin write your name into an upcoming episode.

I hope to hear from you in the days ahead. And I wish you a Merry Christmas and a blessed New Year!

A version of this story appeared in the Dec 24, 2021-Jan 6, 2022 print issue under the headline: Francis' message and an invitation to readers .

Column | Listening, investigating, reporting: A message from Francis and an invitation to readers

Vatican office struggles to keep up with clergy abuse cases