Overturning Roe would not be a pro-life win 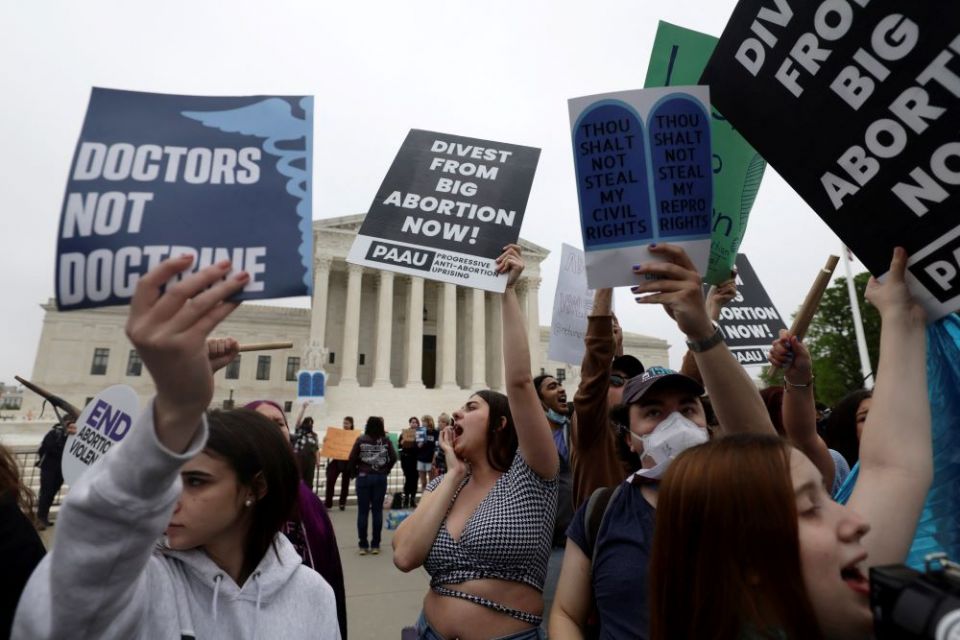 Abortion demonstrators are seen outside the U.S. Supreme Court in Washington May 3. Demonstrations followed the leak of a draft majority opinion written by Justice Samuel Alito preparing for a majority of the court to overturn the landmark Roe v. Wade abortion rights decision later this year. (CNS/Reuters/Evelyn Hockstein)

Back when I was involved in the anti-abortion movement, a common complaint was that Republican politicians never made good on their promises to overturn Roe v. Wade. The pledge to make abortion illegal again, some suspected, was the "carrot on a stick" that Republican candidates dangled in front of pro-life voters, to keep getting their votes. As William Saletan put it in a 2018 Slate piece: "They don't want the court to overturn Roe. They want to keep Roe as a punching bag and as a sandbag. Roe protects them from having to deliver on their promises to pro-life voters."

Over time, many of these voters grew disenchanted with the Republican Party, for this and other reasons. Voters who embraced a "seamless garment" or "whole life" ethic, seeing abortion as one of many threats to human flourishing, grew disgusted as Republican leaders spouted rhetoric about the sanctity of life while enthusiastically supporting anti-life initiatives such as torture and the death penalty, and while refusing to support programs that would make choosing life easier for women.

If the recent news that the U.S. Supreme Court may be preparing to overturn Roe v. Wade is accurate, then Saletan and others were wrong: The Republicans were not just giving lip service to an anti-abortion agenda. They really meant it. After nearly 50 years, they may really be about do away with the federal legalization of abortion.

There was a time when this news would have made me happy, but now, it does not. I cannot join in the enthusiasm of anti-abortion activists, writers and politicians. I do not believe that this is truly a win for life. Nor do I believe that the Republican politicians or anti-abortion activists cheering on this potential decision are really serious about saving lives — because that is not the effect likely to be brought about by overturning Roe.

The political party that calls itself pro-life has spent decades engaging in rhetoric about the value of unborn life but has done nothing whatsoever to indicate that they are serious about protecting these lives.

Of course, a leaked draft is not yet a ruling, so some anti-abortion activists are only cautiously optimistic. Lila Rose of Live Action tweeted that overturning Roe would be the "bare minimum." Others have been more enthusiastic. "Today is a day for courage and hope," said Americans United for Life President Catherine Glenn Foster.

On the other hand, pro-choice spokespeople view the prospect of overturning Roe as something that could put the lives and health of women at risk, set back women's rights for decades and place the heaviest burdens on vulnerable populations. There is also concern that this could open the door for the overturning of other rulings. Charles P. Pierce at Esquire expressed the fear of many, when he wrote: “They’re coming for Griswold, and for Obergefell, and for Lawrence, and for Loving, for all I know.”

If you are dedicated solely to the prevention of abortion and the saving of unborn lives, if this is something you are serious about, on a practical and not just a theoretical level, the obvious thing you would do is look at all the available means of addressing the situation and determine which one works best. You would consider data from one nation to the next, from one era to the next, and look at what societal trends or public policies correlate with lower abortion rates.

You might start out, understandably, thinking that making abortion illegal would be the obvious solution. But you would find that there is little evidence that banning abortion leads to reduced abortion rates. On the contrary, data from the World Health Organization indicates that banning abortion does not tend to lead to a noticeable decrease in abortion rates. What it does tend to do is drive abortion underground, especially in developing nations. This means that the numbers of abortions performed in unsafe circumstances goes up. One researcher's study indicated that abortion bans can lead to a significant increase in pregnancy-related deaths.

Women do not stop seeking out abortion just because it is illegal. But making it illegal does affect how and where they procure it.

Another concern pro-choice people have expressed is that abortion bans could lead to women being imprisoned following a miscarriage. This has occurred in other nations with prohibitive abortion laws, such as El Salvador. And in the United States, there have already been cases of women being charged with manslaughter following a miscarriage. Usually, as noted by the BBC, these charges have been brought following the discovery of evidence of substance abuse, and women of color are disproportionately represented in such cases.

In such a climate of fear and suspicion, women will be reluctant to seek life-saving care in the event of a miscarriage — or indeed, to seek pregnancy care at all.

If they can even afford to seek such care, that is. And this is another cause for concern. Given the rampant poverty and income inequality in our nation, the prohibitive cost of health care and the fact that approximately 31 million U.S. citizens are uninsured, it is difficult, if not impossible, for many women to access prenatal care or afford labor and delivery. What will these women do when they are faced with the prospect of pregnancy? 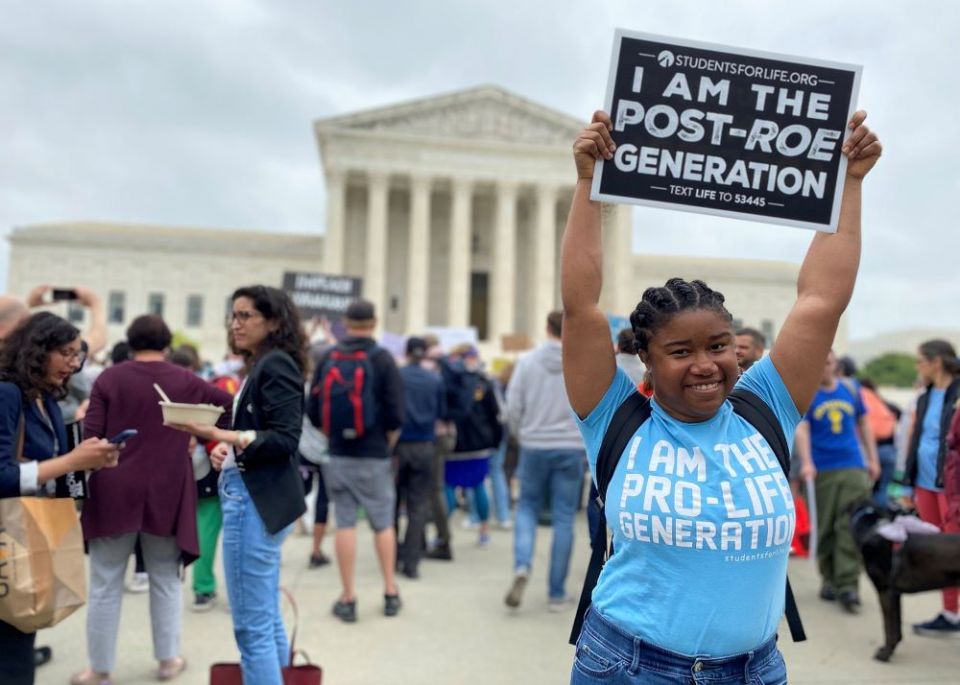 Norvilia Etienne of Students for Life holds a sign outside the U.S. Supreme Court May 3, the day after a draft of the court's opinion was leaked signaling that the court was leaning toward overturning Roe v. Wade. (CNS/Rhina Guidos)

Making legal abortion inaccessible to these women, in such a socioeconomic climate, is unlikely to save unborn lives, but will likely lead to more women experiencing physical and psychological harm, and possibly even death. And this will likely increase the burden already carried by the poor, by women of color and by disabled people.

For seamless-garment pro-lifers who see abortion as one of many threats to life, the idea that you can stop abortion by banning it might look good on paper. After all, throughout history, activists have succeeded in stamping out many injustices by making them illegal. For instance, anti-abortion activists frequently make a comparison to outlawing slavery, pointing out that when it came to protecting the rights of enslaved Black people, simply waiting to change hearts and educate minds was insufficient.

This comparison not only is offensive to descendants of enslaved people and derogatory toward women who have abortions, it also simply does not bear out. The situations are not equivalent, and the attempt to pretend they are must falter when it comes into the messy world in which pregnancy and reproductive health happen: a world filled with complicated and often painful realities, including poverty, abuse, rape, lack of health care access, illness, ecological disruption, war and geopolitical instability. Even as a theory, it does not stand up well.

Based on the data across the years and from one nation to the next, the best way to deal with abortion is to reduce demand. Access to birth control is frequently cited as one of the most vital tools we have for decreasing demand. Take, for instance, the case of the state of Delaware, where the rate of abortions and that of unplanned pregnancies decreased dramatically between 2014 and 2017, after the state aggressively expanded contraception access.

But anti-abortion activists seem uninterested in using these methods that are demonstrated to work to protect life. And the Republican leaders they support have dealt with none of the systemic issues that drive abortion demand. They have, indeed, consistently opposed attempts to get more and better financial and health care resources to women in vulnerable demographics. Every single Republican in the House and the Senate voted against the monthly child allowance in 2021. Also in 2021, 101 house Republicans opposed the Pregnant Workers' Fairness Act, which would have protected pregnant workers from discrimination. In 2019, Republicans voted against protecting people with pre-existing conditions. In 2013, House Republicans voted to reduce food stamps by $40 billion over 10 years.

The political party that calls itself pro-life has spent decades engaging in rhetoric about the value of unborn life but has done nothing whatsoever to indicate that they are serious about protecting these lives.

Were Republicans holding off on overturning Roe in the past simply because they needed to continue to dangle it in front of voters, to secure their support? That I do not know. Probably, for some politicians, this was the motivation. Others have been committed to overturning Roe all along. And possibly, though it is difficult for me to believe, a few sincerely believe such a move would actually save lives instead of harming them.

It is worth noting, that if Roe does get overturned, Republican politicians still have other promises to dangle before right-wing voters. It might be the promise of getting "critical race theory" out of schools. It might be the promise of stripping rights from LGBTQ people. It might even be a border wall again. Whichever way they go, given recent campaigns of fearmongering and outrage, conservative leaders have no shortage of issues they can use to galvanize their base.

A version of this story appeared in the May 27-June 9, 2022 print issue under the headline: Overturning Roe would not be a pro-life win .

Rebecca Bratten Weiss is a writer and journalist exploring women's issues, politics, the arts, racial justice and ecology. She is digital editor at U.S. Catholic magazine.

Opinion | Overturning Roe would not be a pro-life win

Kavanaugh's confirmation leaves us with a divided country

Project Veritas is not journalism, much less 'truth'