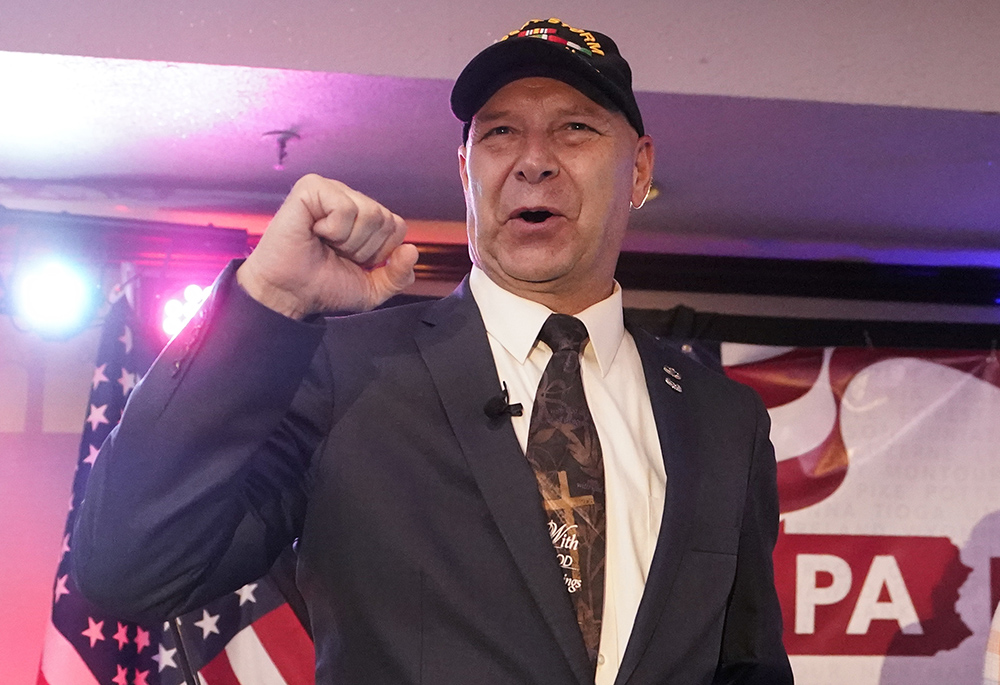 State Sen. Doug Mastriano, R-Franklin, the Republican candidate for governor of Pennsylvania, gestures to the cheering crowd during his primary night election party May 17 in Chambersburg, Pennsylvania. (AP photo/Carolyn Kaster)

"Wow. God is good," Republican gubernatorial nominee Doug Mastriano began his victory speech on the night of May 17. The crowd shouted back: "All the time." "And all the time," the successful candidate said. "God is good," the crowd replied. Mind you, I believe that God is good all the time. But this is not the usual way candidates for office begin major speeches.

Mastriano is not a usual candidate. He is a Christian nationalist. "Any freedom-loving Americans in the house here?" he continued. "First Corinthians 1:27 gives us all hope. 'God uses the foolish to confound the wise and the weak to be found as strong.' Right? That's his story. And he chooses people like you and me to change history. I always like to say when we make his story our story, we can change history."

Viewing America's place in the world as providential is as American as apple pie. From John Winthrop's "City on a Hill" sermon delivered to his fellow Puritans in 1630, through Manifest Destiny, the postwar struggle against "godless communism," the idea that working for American greatness was somehow equivalent to bringing about the Kingdom, is almost a commonplace. Not for nothing did the Society of the Cincinnati commemorate the centennial of the U.S.'s definitive shedding of isolationism and entrance into World War I with an exhibit entitled, "The Great Crusade: World War I and the Legacy of the American Revolution."

This providentialist narrative has always played a bit fast and loose with the facts. New England was peopled by strict Calvinists in the 17th century, but most other colonies were more obviously commercial ventures. The American founding was led mostly by deists like Thomas Jefferson and George Washington or Unitarians like John Adams. The U.S. Constitution makes no mention of a divinity, and the Bill of Rights specifically failed to privilege any particular kind of religious expression or affiliation.

Abraham Lincoln was not only our greatest president but also the outstanding American theologian of the 19th century. His second inaugural address, delivered as the Civil War was coming to its conclusion, acknowledged a deeply engaged divinity, but one whose only partisanship was on behalf of justice and charity:

Both [North and South] read the same Bible and pray to the same God and each invokes His aid against the other. It may seem strange that any men should dare to ask a just God's assistance in wringing their bread from the sweat of other men's faces but let us judge not that we be not judged. The prayers of both could not be answered — that of neither has been answered fully.

The Almighty has His own purposes. "Woe unto the world because of offenses for it must needs be that offenses come but woe to that man by whom the offense cometh." If we shall suppose that American slavery is one of those offenses which in the providence of God must needs come but which having continued through His appointed time He now wills to remove and that He gives to both North and South this terrible war as the woe due to those by whom the offense came shall we discern therein any departure from those divine attributes which the believers in a living God always ascribe to Him.

Fondly do we hope — fervently do we pray — that this mighty scourge of war may speedily pass away. Yet, if God wills that it continue until all the wealth piled by the bondsman's two hundred and fifty years of unrequited toil shall be sunk and until every drop of blood drawn with the lash shall be paid by another drawn with the sword as was said three thousand years ago so still it must be said "the judgments of the Lord are true and righteous altogether."

Those words convey a different sense of the relationship of divine will to national purpose from that heard at Mastriano's campaign headquarters the other night.

In 1980, Rev. Jerry Falwell published a book, Listen, America!, in which the political neophyte wrote, "Any diligent student of American history finds that our great nation was founded by godly men upon godly principles to be a Christian nation." That same year, however, an editorial in Falwell's Moral Majority Report was entitled, "Moral Majority Opposes 'Christian Republic,' " because the Jewish adherents to the newly formed group objected to the term.

Throughout his career, Falwell would sometimes let the phrase "Christian nation" slip out, but he would always apologize, even though his entire approach to politics was rooted in his particular brand of Christian identity.

Mastriano thinks that America has run into difficult times because we have abandoned godly ways. He objects to vaccine mandates and gay rights and transgender anything and critical race theory and property taxes and any restrictions on gun ownership. As a state senator, he held a hearing after the 2020 election to examine false allegations of voter fraud made by former President Donald Trump's legal team, and to discuss ways to overturn the results of President Joe Biden's victory. He was present for the Jan. 6, 2021, attack on the U.S. Capitol.

Trump made a controversial endorsement of Mastriano's bid late in the race and it appears the endorsement ratified, it did not create, the groundswell of support for Mastriano.

At a "Patriots Arise for God and Country" event in April, Mastriano told the gathering: "We have the power of God with us. We have Jesus Christ that we're serving here. He's guiding and directing our steps." Mastriano's language is infused with religious idioms, as is mine, but he evidences no concern about conflating the city of God with the city of man. Mastriano refuses to acknowledge the label of Christian nationalism but he is almost an archetype of the phenomenon. You half expect Russian Orthodox Patriarch Kirill to show up at one of his rallies.

Pope John Paul II, on his first trip back to his native Poland as pontiff, explained the complex relationship of the Polish nation with Christ and his church. "It is therefore impossible without Christ to understand the history of the Polish nation — this great thousand-year-old community — that is so profoundly decisive for me and each one of us," he said during his sermon in Warsaw's Victory Square on June 2, 1979. "If we reject this key to understanding our nation, we lay ourselves open to a substantial misunderstanding. We no longer understand ourselves. It is impossible without Christ to understand this nation with its past so full of splendor and also of terrible difficulties."

It was in the sufferings of Poland that the pope grounded this national hermeneutic. His was not the cheap "prosperity gospel" that, applied to politics, comes from the mouth of Mastriano and his ilk.

Christians are called to engage the world, and to engage it as Christians. But without the mediating influence of a body of teaching like Catholic social teaching, or the Calvinist theology of Abraham Kuyper, or the distinctions drawn by Talmudic scholars, conflating God's purposes with our own purposes is always a dangerous business.

That is why the Pennsylvania Catholic bishops need to speak out. Mastriano's coarse political theology has religious as well as political ramifications. If people think his version of Christianity is authentic, even more people will become estranged from religion. At any rate, the bishops have a responsibility to teach their flock that Catholic theology does not traffic in the often hateful, sometimes lunatic, ideas that Mastriano claims are part of his divinely inspired platform. Yes, God is good, and good all the time. It is the ends to which Christian nationalists put God's eternal goodness that reeks of the sin of pride.