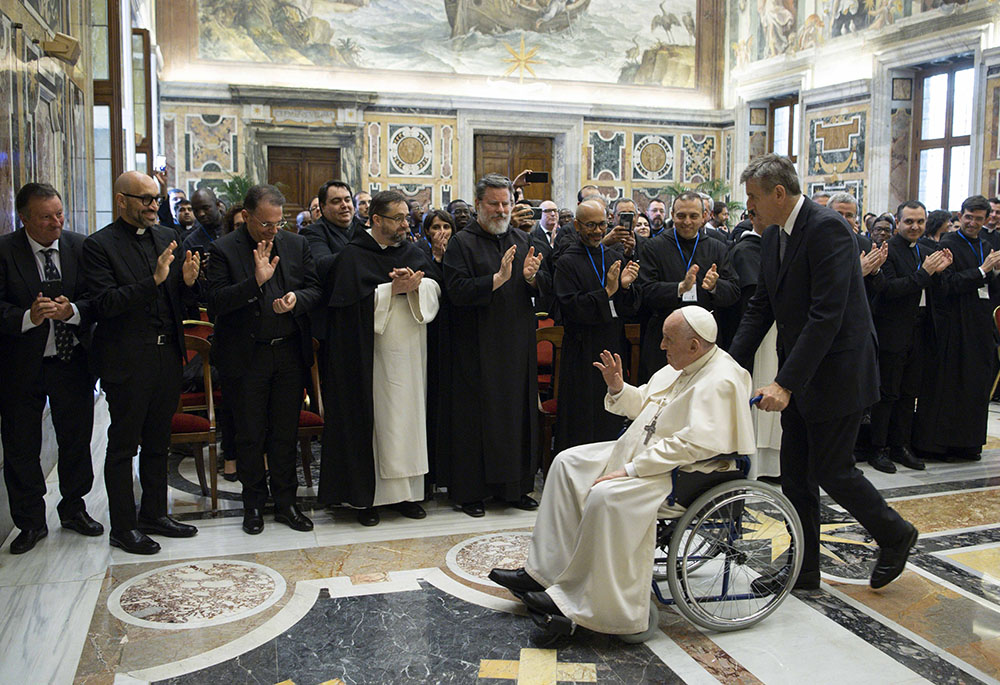 Pope Francis is pushed in a wheelchair by his aide, Sandro Mariotti, as he leaves an audience with students and professors of Rome's Pontifical Institute of Liturgy at St. Anselm, May 7 at the Vatican. The pope said that the celebration of the liturgy and the study of it should lead to greater unity in the church, not division and squabbles. (CNS/Vatican Media)

There is an old saying: "During Holy Week, there is nothing more useless than a Jesuit." The magnificent liturgies of that holiest of times requires a profound liturgical sense. Members of the Society of Jesus have never been known for their liturgical flair and Pope Francis is no exception. When he presides, it is in a very unembellished, straightforward manner.

Consequently, his remarks to the members of the Pontifical Liturgical Institute last weekend (May 7) were a bit surprising. No one should be surprised that a man of such spiritual solidity entertains deep spiritual sentiments about the liturgy, but to hear him share them was a rare insight into what makes the Holy Father tick.

Much of the attention has focused on his remarks about liturgical formalism. "I would like to underline the danger, the temptation of liturgical formalism: going after forms, formalities rather than reality, as we see today in those movements that try to go backwards and deny Vatican Council II itself," the pope said. "In this way, the celebration is recitation, it is something without life, without joy." (Emphasis in original.)

The key phrase there is "deny Vatican Council II." We have all attended post-conciliar liturgies that lack joy. But it is when the liturgy becomes a weapon in the culture wars, when doubts are raised about Vatican II and its legitimacy, when liturgy becomes an ideological expression rather than an ecclesial one, that is where the Holy Spirit is shut out and the in-breaking of the divine mystery is nullified.

Francis did not mince words here: "When liturgical life becomes something of a banner of division, there is the odor of the devil, the deceiver, in there."

His comments about previous changes, such as when Pius XII reintroduced the Easter Vigil, were apt. The naysayers were upset by Pius' action but the fact is the restoration of the great vigil helped prompt the Second Vatican Council to focus on the role of the baptized in new and important ways. Lex orandi, lex credendi: The law of prayer is the law of belief.

Relatedly, the pope said this about ecclesial unity:

Your dedication to liturgical study, on the part of both professors and students, also makes you grow in ecclesial communion. Indeed, the liturgical life opens us up to the other, to the nearest and farthest from the Church, in common belonging to Christ. Rendering glory to God in the liturgy finds its counterpart in the love of neighbor, in the commitment to living as brothers and sisters in everyday situations, in the community in which we find ourselves, with its merits and its limitations. This is the road of true sanctification. Therefore, the formation of the People of God is a fundamental task for living a fully ecclesial liturgical life.

We should not let the pope off the hook here. He jumped from the study of liturgy at St. Anselm's to the normative claims about the liturgy for those of us who do not study at the liturgical institute! I wish he had detailed a little more thoroughly how the liturgy "opens us up to the other" and sketched how rendering glory can lead, as a practical matter, to love of neighbor. How does he draw that connection for himself? Francis told, he did not show, and many of us who watch this papacy with great attention would have preferred if he had showed us what he meant, or revealed some personal anecdotes to flesh out his meaning.

Francis then focused on the relationship of liturgy to mission, noting that every liturgy ends with being sent forth, the etymological root of our word "mission."

"What we live and celebrate leads us to go out towards others, to encounter the world that surrounds us, to encounter the joys and the needs of many who perhaps live without knowing the gift of God," he said. "The genuine liturgical life, especially the Eucharist, always impels us to charity, which is above all openness and attention to others. This attitude always begins and is founded in prayer, especially liturgical prayer. And this dimension also opens us up to dialogue, to encounter, to the ecumenical spirit, to acceptance."

There is a lot to unpack there, but the phrase "gift of God" jumps off the page. In our activistic times, we tend to focus on the goals, not the sources, of our activity. The fight for justice is no longer considered "constitutive" with preaching the Gospel, but exhaustive. Yet, the Compendium of the Social Doctrine of the Church makes clear that grace and gift are the source of Christian solidarity. All Christian grace flows from, and flows decisively from, the mystery of the passion, death and resurrection of the Lord which we celebrate at every Eucharist.

I wish the pope has discussed the role of aesthetics in the liturgy. It is true that different styles of liturgy appeal to different people, but it is also true that we listen to Mozart and have forgotten Salieri because the one is better than the other. I wish, too, the pope had related the liturgy to synodality.

As the church in the United States prepares for a eucharistic revival, how vital it is that we remember, as Francis does, that the Mass does not stand alone, apart from the rest of our faith. Eucharist is a noun because it is first a verb.

The liturgy forms us as a church and educates us into the ways of grace and gift, of suffering and prayer and obedience, which are the church's most essential forces. The liturgy unites us to Christ and, just so, to one another, schooling all in what it means to carry our cross and to hope in the resurrection. The liturgy is the air for the church's lungs. The pope is inviting us to reflect not just on how the church breathes, but also on what we are and what we do when we take a deep liturgical breath.