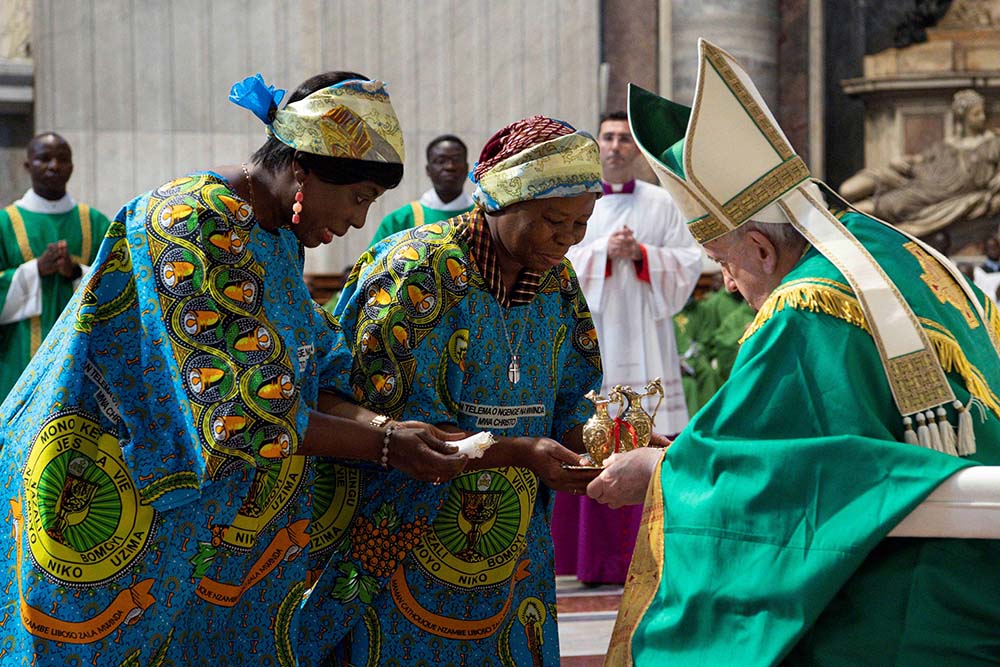 Two members of the Congolese community in Rome present the offertory gifts to Pope Francis during Mass in St. Peter's Basilica at the Vatican July 3. (CNS/Vatican Media)

Pope Francis' apostolic letter about the sacred liturgy Desiderio Desideravi, which he issued last week, is a remarkable document. As he states in the opening paragraph, this is not an exhaustive treatment of such a rich topic, but his insights are profound and speak, or should speak, to us all.

Coupled with the interview the pope gave to Philip Pullella of Reuters over the weekend, we see the Holy Father continuing to invite the church to bestir itself, prodding us to engage the mystery that is at the heart of all we do.

Most of the reporting on the letter rightly focused on its significance for the pope's earlier decision to repeal Summorum Pontificum, Pope Benedict XVI's initiative that permitted wider celebration of the Tridentine rite. Francis was crystal clear in this new letter on the reason for his insistence on the priority of the Vatican II rite:

The problematic is primarily ecclesiological. I do not see how it is possible to say that one recognizes the validity of the Council — though it amazes me that a Catholic might presume not to do so — and at the same time not accept the liturgical reform born out of Sacrosanctum Concilium, a document that expresses the reality of the Liturgy intimately joined to the vision of Church so admirably described in Lumen gentium.

It amazes me too!

Some commentators have focused on the evident influence of theologian Romano Guardini on the pope's thinking. Francis quotes him at several points, but adds his own emphasis. For example:

Guardini writes, "Here there is outlined the first task of the work of liturgical formation: man must become once again capable of symbols." ... The task is not easy because modern man has become illiterate, no longer able to read symbols; it is almost as if their existence is not even suspected.

The observation stings because, once uttered, it is so obviously true.

It is remarkable that so much of the so-called 'liturgy wars' are not about the place of the liturgy in salvation history, but about human tastes and stylistic preferences. The pope, instead, gets to the heart of the matter.

I wish to focus on the very beginning of the letter, which should not be dismissed as mere throat-clearing. Francis recalls the Last Supper, writing, "Peter and John were sent to make preparations to eat that Passover, but in actual fact, all of creation, all of history — which at last was on the verge of revealing itself as the history of salvation — was a huge preparation for that Supper."

It is remarkable that so much of the so-called "liturgy wars" are not about the place of the liturgy in salvation history, but about human tastes and stylistic preferences. The pope, instead, gets to the heart of the matter. "The disproportion between the immensity of the gift and the smallness of the one who receives it is infinite, and it cannot fail to surprise us. Nonetheless, through the mercy of the Lord, the gift is entrusted to the Apostles so that it might be carried to every man and woman."

This understanding of the liturgy as a gift, first and foremost, is what allows Francis to make the simple, straightforward claim: "No one had earned a place at that Supper. All had been invited. Or better said: all had been drawn there by the burning desire that Jesus had to eat that Passover with them."

From this conviction, it is not hard to understand why, in his interview with Reuters, when asked about San Francisco Archbishop Salvatore Cordileone's decision to ban U.S. House Speaker Nancy Pelosi from receiving Communion, Francis said, "When the Church loses its pastoral nature, when a bishop loses his pastoral nature, it causes a political problem. That's all I can say."

The follower of Christ, and especially a minister of Christ, is supposed to attract people to the Supper, not bar them from it.

One of the achievements of post-conciliar theology is the renewed focus on grace and gift in all areas of our Catholic theology. During the long years of hostility to modernity, the focus was on law and identity, "semper idem" and the Neo-Scholastic categories. The Second Vatican Council, beginning with Sacrosanctum Concilium, but also in the other two great dogmatic constitutions, Dei Verbum and Lumen Gentium, renewed virtually every aspect of Catholic theology, but none more than this emphasis on grace and gift, which had perhaps been minimized by the polemics of the Reformation — although not in the decrees of the Council of Trent! There, the decree on justification stands out for the clarity of its teaching on the gratuitousness of God's saving action.

The Communio school of theology, named for the theological journal begun by Henri de Lubac, Joseph Ratzinger and Hans Urs van Balthasar, gets a large part of the credit for restoring this emphasis on grace and gift in the post-conciliar era. Pope John Paul II, with his philosophic bent, introduced important notes from 20th-century personalism into our social doctrine, but it was Benedict XVI who emphasized the importance of gratuitousness in any Catholic economic and political models worthy of the name Christian.

Benedict wanted to achieve the same in liturgy but he misjudged the intentions of certain collaborators intent on putting the Vatican II liturgical toothpaste back in the tube. Now, Francis brings together the pre-conciliar insights of Guardini and the post-conciliar insights of the Communio school.

If there were lacking our astonishment at the fact that the paschal mystery is rendered present in the concreteness of sacramental signs, we would truly risk being impermeable to the ocean of grace that floods every celebration. ... The astonishment or wonder of which I speak is not some sort of being overcome in the face of an obscure reality or a mysterious rite. It is, on the contrary, marveling at the fact that the salvific plan of God has been revealed in the paschal deed of Jesus (cf. Eph 1:3-14), and the power of this paschal deed continues to reach us in the celebration of the "mysteries," of the sacraments.

This astonishment, this wonder, is what makes reading the church fathers so exhilarating: They were still amazed at the outrageous claims made about this Jesus who was crucified and yet raised. They were not engulfed in ideological debates about minutiae. They did not reduce the enormity of the paschal mystery to an agenda of social conservatism or of social justice. Their awe lent the liturgy all the grandeur it requires.

Francis invites us, because Vatican II invited us, to rekindle that awe.

Our wonderful pope continues to teach in ways that are, above all, accessible to the people of God. He is informed by theological expertise, but not constrained by it. Francis, in this document, asks us to recognize the ecclesial character of our worship, and what we could call the liturgical character of our lives as Christians.

We can make his concluding words our own: "Let us abandon our polemics to listen together to what the Spirit is saying to the Church. Let us safeguard our communion. Let us continue to be astonished at the beauty of the Liturgy. The Paschal Mystery has been given to us. Let us allow ourselves to be embraced by the desire that the Lord continues to have to eat His Passover with us. All this under the gaze of Mary, Mother of the Church."