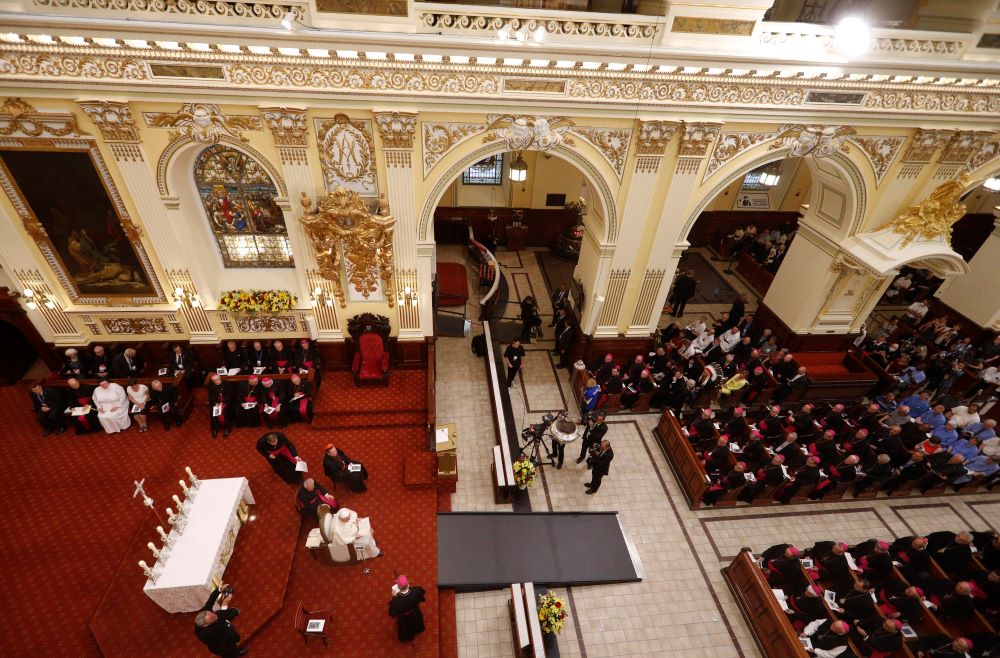 Pope Francis leads vespers with bishops, priests, deacons, consecrated persons, seminarians and pastoral workers in the Cathedral of Notre Dame in Quebec July 28. "How are we doing when it comes to joy?" the pope asked during vespers. "Does our Church express the joy of the Gospel? Is there a faith in our communities that can attract by the joy it communicates?" (CNS/Paul Haring)

During his press conference on the plane returning to Rome from Canada, Pope Francis made a remark about so-called traditionalists that rankled some conservative Catholics and confused others. "A church that does not develop its thinking in an ecclesial way is a church that goes backward," the pope said. "That is the problem of many today who claim to be traditionalists. They are not traditionalists, they are 'backwardists.' Tradition is the root of inspiration in order to go forward in the church."

The operative word here, of course, is not "traditionalists" or "backwardist," although the latter is expressive and accurate. The key word is "ecclesial." And unlocking what the pope means can be found in the text of the talk Francis gave at vespers at the Cathedral Basilica of Notre Dame in Quebec. There he gave the kind of Christocentric ecclesiological vision that the Second Vatican Council made normative.

Recalling his programmatic 2013 apostolic exhortation, Evangelii Gaudium, the pope said, "That is also true of Christian joy: it is a free gift, the certainty of knowing that we are loved, sustained and embraced by Christ in every situation in life.  Because he is the one who frees us from selfishness and sin, from the sadness of solitude, from inner emptiness and fear, and gives us a new look at life and history: 'With Christ joy is constantly born anew' (EG, 1)."

Then, in his classically blunt style, the Holy Father asked, "So let us ask ourselves a question: How are we doing when it comes to joy? Does our Church express the joy of the Gospel? Is there a faith in our communities that can attract by the joy it communicates?"

The church moves forward in time by renewing itself from the wellsprings of its traditions and by attentiveness to the spirit of Jesus Christ in our midst. Full stop.

The pope acknowledged that one of the things that "threatens the joy of faith" in our time is secularization, a forgetfulness of God. "God seems to have disappeared from the horizon, and his word no longer seems a compass guiding our lives, our basic decisions, our human and social relationships," the pope said. There is no denying the truth of his observation: Secularization has changed the cultural landscape within which the church pursues her mission. It is what to make of this fact, and how to respond to it, where the differences between the "backwardist" view and what Francis designates as the "discerning" view emerge.

The first stance adopts a defensive posture. It thinks of faith "as a kind of 'armor', defending us against the world," he said. "This view bitterly complains that 'the world is evil; sin reigns', and thus risks clothing itself in a 'crusading spirit'." If we uncritically adopt this negative response to the ambient culture, "we will end up denying the incarnation: we will flee from reality, rather than making it incarnate in us. We will close in on ourselves, lament our losses, constantly complain and fall into gloom and pessimism, which never come from God."

If you want a recent example of this worldview, proof positive that the Holy Father is not exaggerating in the least, check out Raymond Arroyo's "The World Over" show on EWTN, which featured a segment with Catholic University theologian Chad Pecknold and Peter Kwasniewski of the St. Paul Center in Steubenville, Ohio. (The segment begins at 14:35 in the video.) The dialogue displays that "closed-in" quality, full of lamentation, complaint, gloom and pessimism. 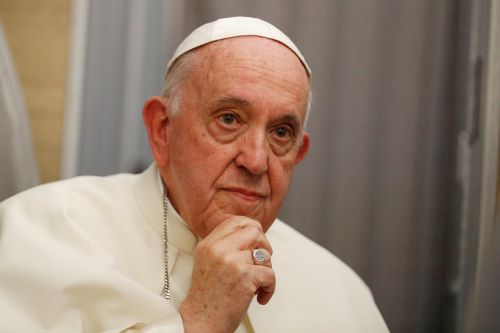 Pope Francis answers questions from journalists aboard his flight from Iqaluit, in the Canadian territory of Nunavut, to Rome July 29. "A church that does not develop its thinking in an ecclesial way is a church that goes backward," the pope said during the flight. (CNS/Paul Haring)

What is more, they invoke tradition the way some fundamentalists invoke inerrancy. Years ago, when I was beginning research for what became my second book, God's Right Hand: How Jerry Falwell Made God a Republican and Baptized the American Right, the thing that surprised me every time I encountered it was the fact that fundamentalists seemed blithely unaware that their literal interpretation of the Bible was actually somewhat novel, even modern. When you pointed out in conversation the different ways the church fathers interpreted Scripture, they were thoroughly unperturbed.

The Holy Father offers a different approach, the path of discernment. Explicitly relying on Pope Paul VI's important post-synodal exhortation Evangelii Nuntiandi, Francis argues that secularization is a legitimate independence from ecclesial jurisdiction, and distinguishes it from secularism, which is an aggressive ideology. He writes:

Saint Paul VI distinguished secularization from secularism, a concept of life that totally separates a link with the Creator, so that God becomes "superfluous and an encumbrance", and generates subtle and diverse "new forms of atheism": "consumer society, the pursuit of pleasure set up as the supreme value, a desire for power and domination, and discrimination of every kind" (ibid).  As Church, and above all as shepherds of God's People, as consecrated men and women, seminarians and pastoral workers, it is up to us to make these distinctions, to make this discernment.  If we yield to the negative view and judge matters superficially, we risk sending the wrong message, as though the criticism of secularization masks on our part the nostalgia for a sacralized world, a bygone society in which the Church and her ministers had greater power and social relevance.

It is vital to note that Paul — and Pope John Paul II and Pope Emeritus Benedict XVI too! — saw what so many American Catholic conservatives refuse to see: the link between consumer society, pleasure, power, discrimination and secularism. Secularism only seems to bother conservative Catholics when it seeks to impose more liberal sexual norms on society. And, to be sure, liberal Catholics need to rethink the way they too easily accept secularized, even libertarian, attitudes in discussions about sexual ethics, as the post-Dobbs discussion has sadly demonstrated.

Francis proposes a different approach. "Secularization represents a challenge for our pastoral imagination, it is 'an occasion for restructuring the spiritual life in new forms and for new ways of existing'," he said, quoting Charles Taylor's 2007 book A Secular Age. The pope suggested that the church meet this challenge with joy not gloom, with witness not words: "The Gospel needs to be proclaimed if we are to communicate the joy of faith to today's men and women. Yet this proclamation is not primarily a matter of words, but of a witness abounding with gratuitous love, for that is God's way with us.  A proclamation that should take shape in a personal and ecclesial lifestyle that can rekindle a desire for the Lord, instill hope and radiate trust and credibility."

The church moves forward in time by renewing itself from the wellsprings of its traditions and by attentiveness to the spirit of Jesus Christ in our midst. Full stop. The key to understanding the ongoing reception of Vatican II lies here precisely: There is no renewal of the life of the church without a return to the sources, a ressourcement. But ressourcement is not an end in itself. The tradition is not a keepsake on the mantle gathering dust. Jesus Christ may be "the same, yesterday, today and forever" but we are not, and so each generation of Christians needs to build on its ecclesial inheritance and preach the Gospel anew. "No one pours new wine into old wineskins" (Lk 5:37).

Francis' remarkable talk to the bishops, clergy and religious in Quebec was not only an invitation to the church in Canada to renew itself, but an invitation to the universal church. Jesus Christ is the wine that is always new. It is up to us to find new wineskins, and we will never find them by going backwards.