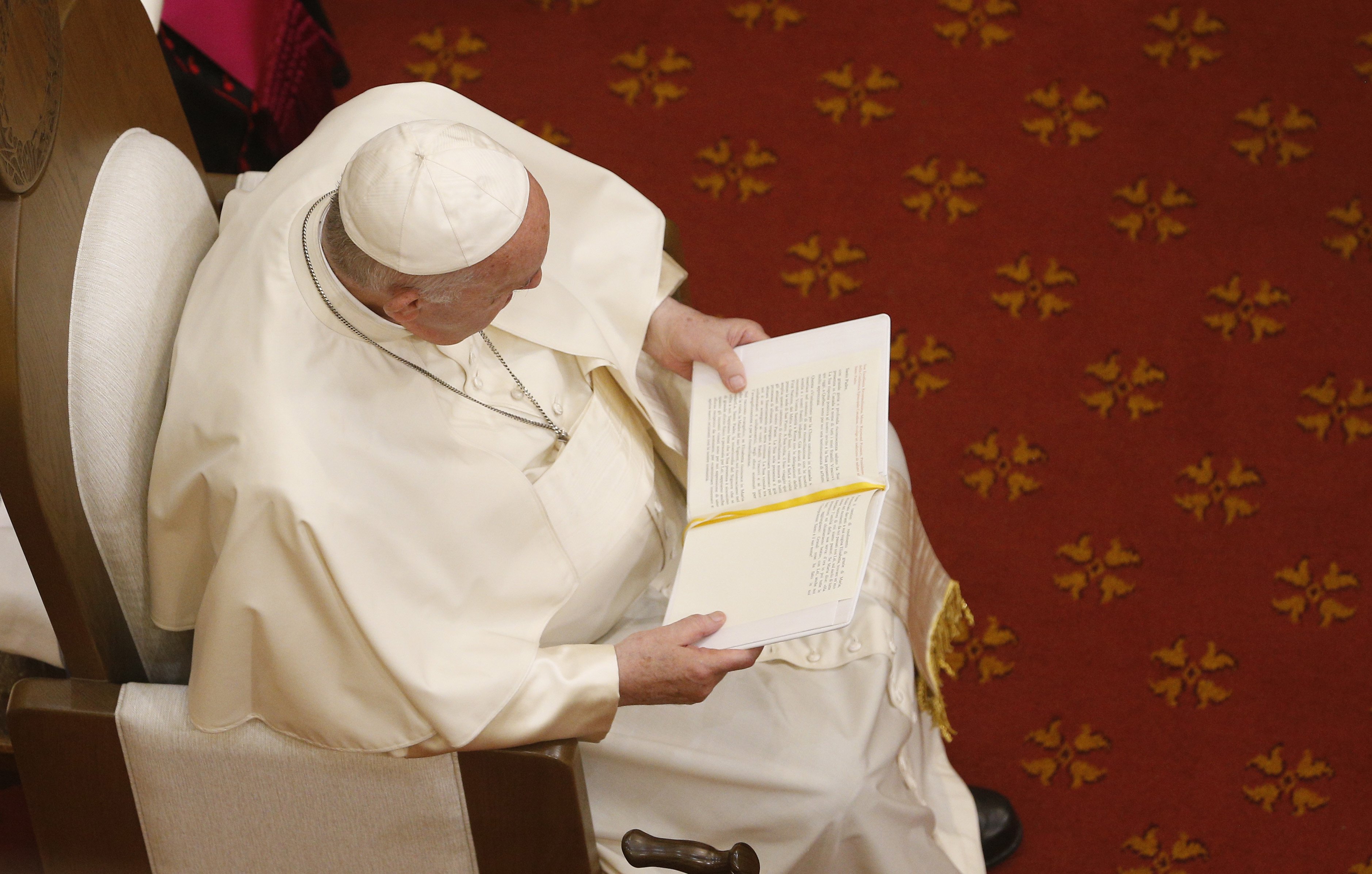 For the first time during his weeklong tour of Canada, Pope Francis on July 28 apologized for the "evil" of clergy sex abuse, vowing that Catholic Church leaders must pledge to "never again" allow such atrocities to occur.

"Together with you, I would like once more to ask forgiveness of all the victims," said Francis. "The pain and the shame we feel must become an occasion for conversion: never again!"

Since arriving in the country July 24, Francis has apologized on several occasions for the abuse that Indigenous children suffered at Catholic-run residential schools, as well as the church's adoption of policies that stripped away Native culture and customs, but had not specifically singled out sexual abuse, subjecting him to criticism from some survivors.

Here in the capital city of Quebec on the second to last day of his visit, the pope said that responding to the sexual abuse scandals requires "firm action and an irreversible commitment."

While the pope offered a blanket apology for all sexual abuse against "minors and vulnerable people," he did not specifically single out Indigenous victims. His apology, however, was immediately followed by a direct mention of the ongoing "process of healing and reconciliation with our Indigenous brothers and sisters."

"Never again can the Christian community allow itself to be infected by the idea that one culture is superior to others, or that it is legitimate to employ ways of coercing others," the pope said.

Francis' remarks came during a vespers service in the 19th-century Cathedral-Basilica of Notre Dame de Québec with the country's Catholic hierarchy, priests and religious men and women.

While some 38% of Canada's population professes to be Roman Catholic, those numbers have been in a steep decline in recent decades, particularly here in the once Catholic stronghold of Quebec.

In addressing the country's priests and bishops, Francis acknowledged this rapid secularization, saying that it often seems that God has been relegated "to the background." Yet despite those trends, the pope cautioned against an embattled mentality, or feeling resentment toward the rest of the world.

Such an approach, said Francis, "bitterly complains that 'the world is evil; sin reigns,' and thus risks clothing itself in a 'crusading spirit.'"

"We need to be careful, because this is not Christian," he added. "It is not, in fact, the way of God."

Instead, the pope said, engaging the modern world requires a new "pastoral imagination" — an approach marked by "listening, dialogue and encounter."

'Never again can the Christian community allow itself to be infected by the idea that one culture is superior to others, or that it is legitimate to employ ways of coercing others.'
—Pope Francis

"You are key figures and builders of a different Church: humble, meek, merciful, which accompanies processes, labors decisively and serenely in the service of inculturation, and shows respect for each individual and for every cultural and religious difference," said Francis. "Let us offer this witness!"

In recent years, the Canadian Catholic bishops have been divided in their approach to the country's Indigenous population, many of whom are Catholics, with some bishops skeptical about the inculturation of Indigenous traditions into the liturgy and reluctant to offer an apology for the church's running of residential schools.

Michel Andraos, coordinator of the new Centre on the Churches, Truth, and Reconciliation with Indigenous Peoples at St. Paul University in Ottawa, said that in his view the bishops had been "guilty" of postponing the papal visit to Canada.

Speaking to NCR on July 28, Andraos said he believed the visit should have happened in 2016, the year after the final report of Canada's Truth and Reconciliation Commission, which called for the pope to visit the country and apologize on Canadian soil within a year of the report being published.

Such a visit — and a collective apology — was stalled, the coordinator said, by a number of leading figures in the bishops' conference, which he said caused "unnecessary pain for survivors, their families and the Indigenous peoples, in general."

Last September, the Canadian bishops finally issued a collective apology to the Indigenous population, and as the pope addressed the collective body on July 28, Francis urged unity among them.

"Are we brothers, or competitors split into parties? And how about our relationships with those who are not 'one of our own,' with those who do not believe, with those who have different traditions and customs?" he asked.

"This is the way: to build relationships of fraternity with everyone, with Indigenous brothers and sisters, with every sister and brother we meet, because the presence of God is reflected in each of their faces," said the pope.

While Andraos said he was personally moved by the pope's apologies, he said that the "magnitude of the damage done" to the Indigenous peoples could not be underestimated and that much work remains, particularly among the hierarchy.

"There are some prophetic voices that have been sensitive to reading the signs of the times and close to Indigenous peoples," he said, noting that a handful of Canadian bishops have "personally and theologically experienced a deep conversion and they are walking with people."

"If they had been taken seriously, we would not be here today," he added, saying he hopes the pope encourages the rest of the episcopate to "follow their example." 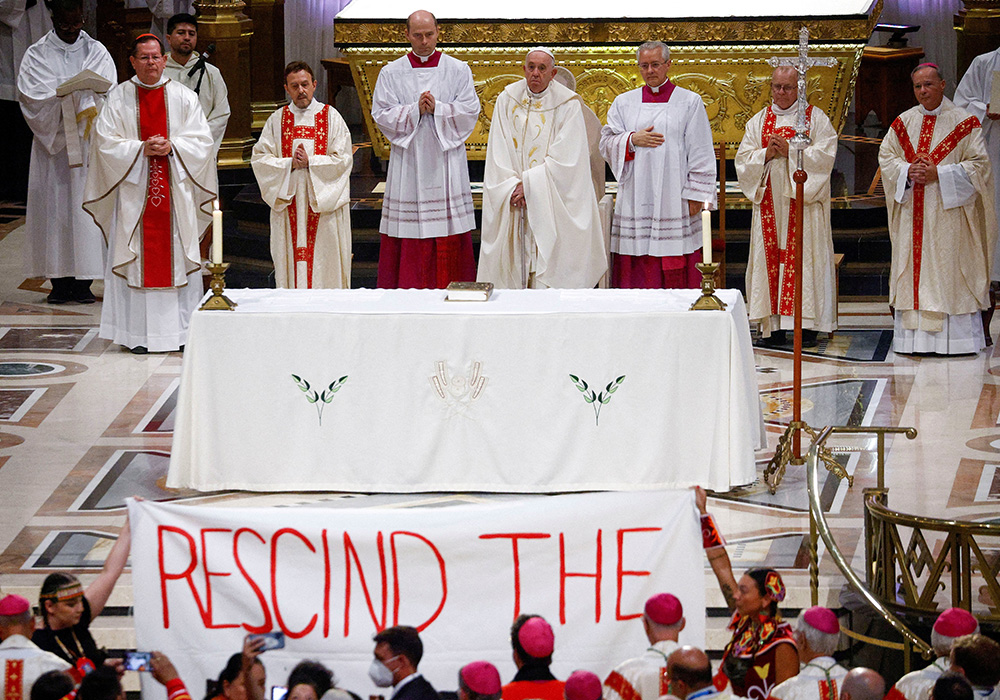 Indigenous people hold a banner calling on Pope Francis to "rescind the doctrine," an apparent reference to the so-called Doctrine of Discovery, a collection of old papal teachings that encouraged explorers to colonize and claim the lands of any people who were not Christian, placing both the land and the people under the sovereignty of European Christian rulers. The incident occurred during a papal Mass at the Basilica of Ste. Anne de Beaupré July 28 in Quebec. (CNS/Reuters/Guglielmo Mangiapane)

Earlier in the day, Francis celebrated a Mass at the Basilica of Ste. Anne de Beaupré, outside Quebec City, with about 1,800 invited attendees inside the shrine and an estimated 5,000 more people watching remotely outside.

There, the pope urged Canada's Catholics to continue the process of reconciliation with the Indigenous peoples, saying not to be overwhelmed by past failures, but motivated by the desire for healing.

"In confronting the scandal of evil and the Body of Christ wounded in the flesh of our Indigenous brothers and sisters, we too have experienced deep dismay; we too feel the burden of failure," the pope said.

"Whenever our failures lead to an encounter with the Lord, life and hope are reborn and we are able to be reconciled: with ourselves, with our brothers and sisters, and with God," he continued. "So let us follow the itinerary of this journey. We can call it a journey from failure to hope."

Just moments before Mass began, two people unrolled in front of the altar a large banner with the words "Rescind the Doctrine" emblazoned on it, a reference to the 15th-century "Doctrine of Discovery," which offered a theological justification for the colonization of Indigenous lands.

While church officials have maintained that the doctrine no longer has any legal merits, Canada's bishops' have been working with Vatican officials for a formal rescission of the policy, which has been an ongoing demand of many Indigenous advocates. To date, Francis has not commented directly on that matter during the trip.

Francis will wrap up his weeklong visit to Canada on July 29 by traveling to the Arctic region of Iqaluit, the capital city of the Canadian territory of Nunavut, where he will hold a final meeting with residential school survivors before flying back to Rome.