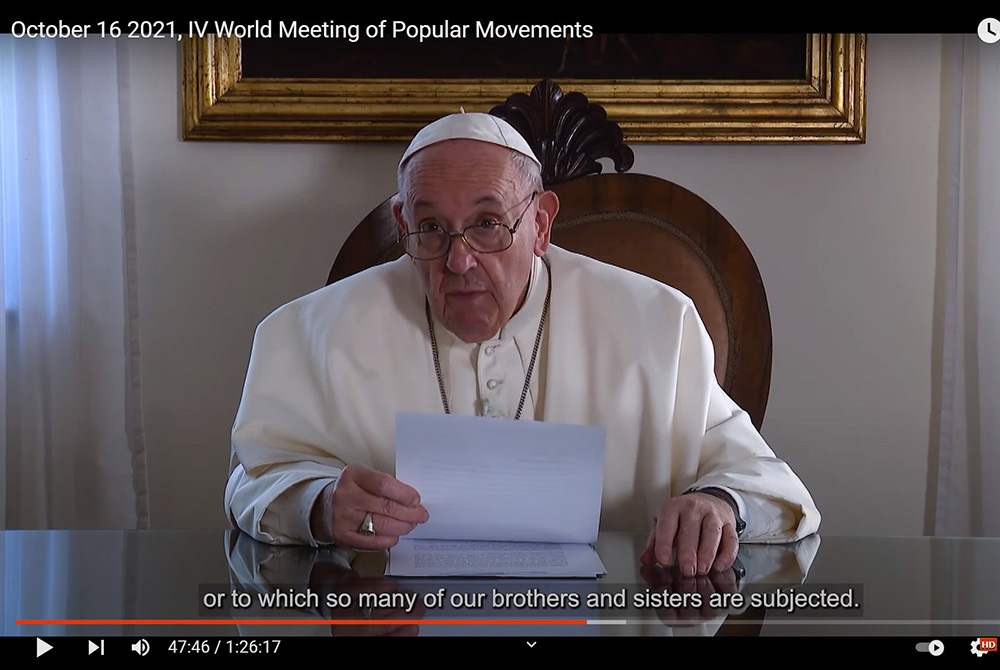 Pope Francis delivered another remarkable address last weekend when he spoke to the fourth World Meeting of Popular Movements. The gatherings of community organizers are like a meeting of theologians, only the theology is done with one's hands rather than with one's words. They seem to invite Francis to show the world that side of him that was previously known only to those he visited in the barrios of Buenos Aires.

The worldwide gatherings have occasioned some of the pope's strongest social teaching as witnessed in 2015 when he spoke at the second such gathering in Santa Cruz, Bolivia. There he said, "And behind all this pain, death and destruction there is the stench of what Basil of Caesarea, one of the church's first theologians, called 'the dung of the devil.' An unfettered pursuit of money rules. That is the dung of the devil."

Those words should be emblazoned over the entryway of every business school at a Catholic university, but they aren't.

This weekend, the pope's comments about the protests after the murder of George Floyd rightly captured the headlines. The pope said that he thought of those protests when he thinks about the good Samaritan.

"It is clear that this type of reaction against social, racial or macho injustice can be manipulated or exploited by political machinations or whatever, but the main thing is that, in that protest against this death, there was the collective Samaritan who is no fool! This movement did not pass by on the other side of the road when it saw the injury to human dignity caused by an abuse of power."

Call me an ultramontanist, but I am always impressed that this 84-year old Argentinian, who has never spent much time in this country, can identify and name an inflection point in U.S. culture that so many U.S. Catholics failed to even grapple with.

The critics of Pope Francis, of course, forget that St. Pope John Paul II and Pope Emeritus Benedict XVI were also quite explicit about the demands of the Gospel when confronting issues of economic justice.

The Holy Father also discussed the challenge of the "post-truth plot." In fact, he mentioned this several times. At the beginning of his talk, when discussing the pandemic and the world's response to it, he said:

In these months, many things you've long been denouncing have become totally obvious. The pandemic has laid bare the social inequalities that afflict our peoples. Seeking neither permission nor forgiveness, it has exposed the heartbreaking situation of so many brothers and sisters, the situation that so many post-truth mechanisms have been unable to conceal.

There is a connection between the inequalities and the post-truth mechanisms and that connection is consumer culture. It buys our silence with entertainment, and confirms us in our ignorance by fixing the media's attention on ephemeral concerns and Hollywood dramas. It creates needs out of wants so that we forget about the genuine needs of our sisters and brothers who live in poverty.

After discussing the shock people express whenever he cites the social doctrine of the church, the pope said:

The word "plot" suggests intent, and the intent is to return to the old ways of making money, ways that require the nullification of any humanism, still more any true Christian witness. The critics of Pope Francis, of course, forget that St. Pope John Paul II and Pope Emeritus Benedict XVI were also quite explicit about the demands of the Gospel when confronting issues of economic justice. Their manner of speech may have been less trenchant but the teaching was the same.

The pope mentioned "post-truth" also in his words to the media:

In the name of God, I ask the media to stop the logic of post-truth, disinformation, defamation, slander and the unhealthy attraction to dirt and scandal, and to contribute to human fraternity and empathy with those who are most deeply damaged.

I wish to correct the Supreme Pontiff in one regard: If we in the media do not ferret out scandal, who will? There is an "unhealthy" focus on scandal, to be sure, but there is also such a thing as a healthy focus on scandal. His other objections to the way modern media operate need no amendment.

Confronting these manifestations of a disregard for truth, and finding ways to center a concern for veracity, is part and parcel of the task of creating culture that is the indispensable forerunner of evangelization. Ideology and interests are not friends in this endeavor, as you can see by watching cable news shows. On both the left and the right, distortions of language and emotionally charged appeals obfuscate the search for truth instead of aiding it. That said, the degree to which one political party in this country, the Trump party, is willing to swallow big lies and pass them on as truth makes any suggestion of moral equivalence impossible.

This address to the social movements' gathering is stunning. No other world leader speaks like this. In the Christian tradition, we need to go back to teachers like St. John Chrysostom and St. Augustine to find this kind of bracing articulation of the social consequences of sin. With all the noise of the "post-truth" times in which we live, how blessed the Catholic Church is to have a leader who cuts through all the BS and speaks with moral clarity.