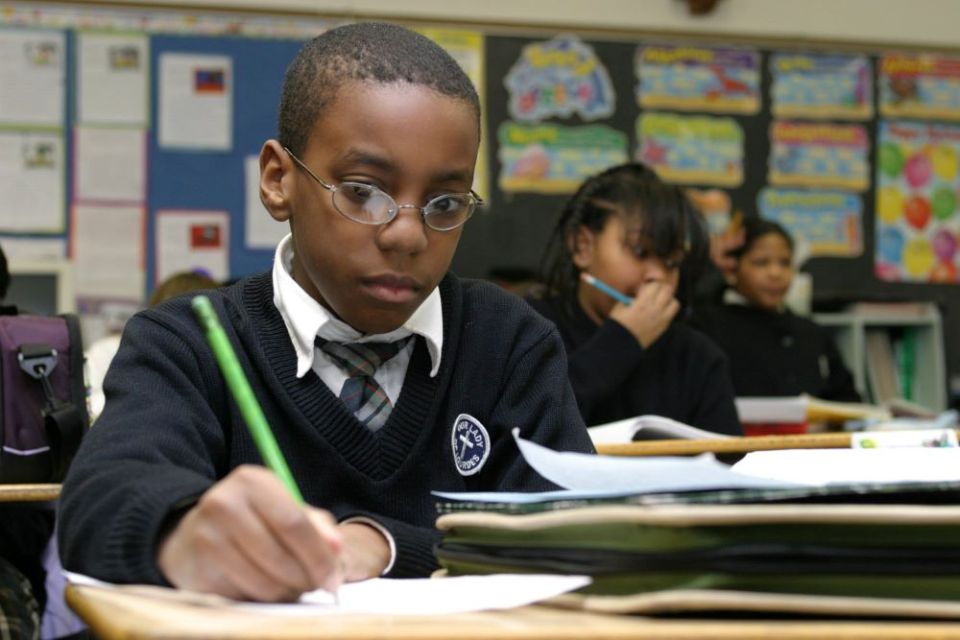 Fourth-grader Richard Blount works on a social studies assignment at Our Lady of Lourdes School in Massapequa Park, N.Y., Jan. 14, 2004. At the time, more than 2.5 million students were enrolled in 8,000 Catholic elementary, middle and secondary schools in the United States. (CNS/Long Island Catholic/Gregory A. Shemitz)

In 1891, the pastors of the Catholic churches in Faribault and Stillwater, Minnesota, reached an agreement with their respective school boards. The town rented the parochial school buildings from the parishes during the hours when classes were held, religious women who had received state certification instructed the children and were paid by the town school board, and religious education was conducted after normal school hours. The arrangement won the approval of Archbishop John Ireland of St. Paul.

The arrangement also embroiled the archbishop in controversy. "Ireland now found himself attacked by Protestants who thought the State had granted too much to the Church, and by Catholic opponents who thought the Church had conceded too much to the State," Jesuit Fr. Gerald Fogarty wrote about the controversy in his book The Vatican and the American Hierarchy from 1870 to 1965.

Ireland's stance placed him in the vanguard of the Americanists, those prelates, mostly Irish, who wished to engage the dominant culture, against whom were ranged an alliance of German and conservative bishops who viewed assimilation as a danger to the faith. The latter argued that the legislation of the Third Plenary Council of Baltimore mandated Catholic schools in all parishes, not these hybrids being experimented with in Minnesota.

The case went to Rome, where the Propaganda Fide (now the Congregation for the Evangelization of Peoples) issued a decision that the school arrangement in Faribault and Stillwater could be tolerated, that the canons of the Third Plenary Council were not abrogated but that special circumstances allowed for variety in their application. 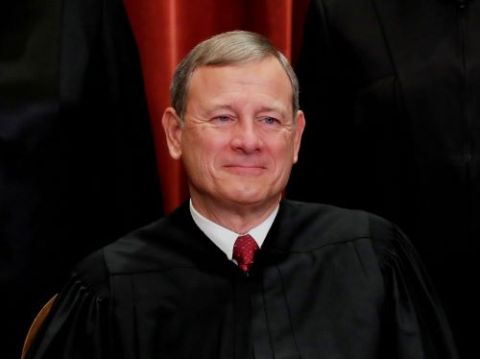 Chief Justice John Roberts, shown here in a March 3, 2020, file photo, wrote the majority opinion for the June 21 Supreme Court ruling that said Maine cannot exclude religious schools from a state tuition program. Roberts said the ruling did not require states to support religious education but states that do subsidize private schools may not discriminate against religious ones. The vote was 6 to 3; the court’s three liberal justices dissented. (CNS/Reuters/Jim Young)

Then, as now, the role of the Catholic schools in society touches upon larger issues of church-state relations as well as of internal church matters. During the controversy over Ireland's school plan, Cardinal James Gibbons of Baltimore, at the time the only U.S. cardinal, wrote to Ireland:

It is not the Faribault school that is on trial, but the question to be decided is whether the Church is to be governed by men or by children, — by justice and truth, or by diplomacy and intrigue, whether the church is to be honored as a bulwark of liberty and order, or to be despised and suspected as an enemy of our Institutions.

Gibbons was an Americanizer like Ireland, sharing the Minnesota archbishop's confidence that the Catholic Church and the ambient culture would engage in mutually beneficial ways.

Then, unlike now, the political pressure against funding Catholic schools came from Protestants who were in the majority in most states. They determined that the King James Version of the Bible would be read in public schools and saw no reason to divert public funds to sectarian Catholic schools. Today, the political pressure comes from a kind of liberalism, once dominant in legal circles, that sees secularism as a necessary predicate of liberalism.

This week, the U.S. Supreme Court entered the perennial issue of church schools and their relationship to the public sphere, striking down a Maine law that forbid religious schools from receiving public money that was otherwise made available to students attending private, non-religious schools. Writing for the 6-3 majority in the decision, Chief Justice John Roberts concluded:

The State pays tuition for certain students at private schools — so long as the schools are not religious. That is discrimination against religion. A State's antiestablishment interest does not justify enactments that exclude some members of the community from an otherwise generally available public benefit because of their religious exercise.

Maine created this tuition assistance program not as a means of advancing school choice, but as a necessity imposed by the highly rural character of the state: Many of the school districts could not afford to build and maintain a secondary school. But, once the decision was made to allow students to attend private schools with tuition paid by the government, as well as public schools, the issue was no longer public versus private schools, but one type of private school versus another.

If the Maine law was based on sound constitutional principles, could not the government deny Pell grants and other forms of tuition assistance to college students attending Catholic colleges and universities? Does such aid constitute an establishment of religion? Of course not.

This potential for religious strife is still with us. We are today a Nation with well over 100 different religious groups….People in our country adhere to a vast array of beliefs, ideals, and philosophies. And with greater religious diversity comes greater risk of religiously based strife, conflict, and social division. The Religion Clauses were written in part to help avoid that disunion.

There is plenty of strife in this country that has nothing to do with religion. The pernicious influence of libertarianism, which is a kind of anti-religion, is the most conspicuous source of public strife today and has been for some time. The violence and vandalism currently being perpetrated against churches and crisis pregnancy centers is committed by people who hate religion, not by those who espouse it.

What is more, Breyer's condescending observation turns on its head the logic of the most significant constitutional mind among the Founding Fathers, James Madison. As he observed during the debate over the Virginia Constitution in 1788:

Happily for the states, they enjoy the utmost freedom of religion. This freedom arises from that multiplicity of sects, which pervades America, and which is the best and only security for religious liberty in any society. For where there is such a variety of sects, there cannot be a majority of any one sect to oppress and persecute the rest.

Justice Sonia Sotomayor also dissented in the case and, like Breyer, worries that the majority's opinion is a big step toward religious establishment, which is prohibited by the First Amendment. Her argument begins with the kind of faulty historical reasoning normally found among the conservative Originalists on the court.

"This Court continues to dismantle the wall of separation between church and state that the Framers fought to build," Sotomayor's dissent begins. The "wall" of separation metaphor comes from a later letter from one founder, Thomas Jefferson, who was not at the Constitutional Convention and whose views on this issue in particular were outliers.

Additionally, the First Amendment's ban on the establishment of religion by the federal government won the support of many devout 18th-century Calvinists who wanted to make sure that any federal establishment would not interfere with their state-level establishments. Several New England states maintained an established religion into the first decades of the 19th century. Massachusetts was the last, disestablishing the Congregational Church in 1833.

It remains to be seen how far the logic of this decision might tend. This decision is one more in a series by which the Court reverses the pendulum of legal theory which had swung too far toward the anti-establishment clause, diminishing the concern for the clause that protects the free exercise of religion. That pendulum could swing too far in the opposite direction, to be sure. I appreciate the "room for play in the joints" metaphor invoked by both Breyer and Sotomayor, but the First Amendment jurisprudence of the Warren and Burger courts they defend did not allow much play either. Nor did the Maine law. The court was right to strike it down.

US billionaires will back anyone who isn't Warren, Sanders

Looking to have an impact on climate change? Start with lunch