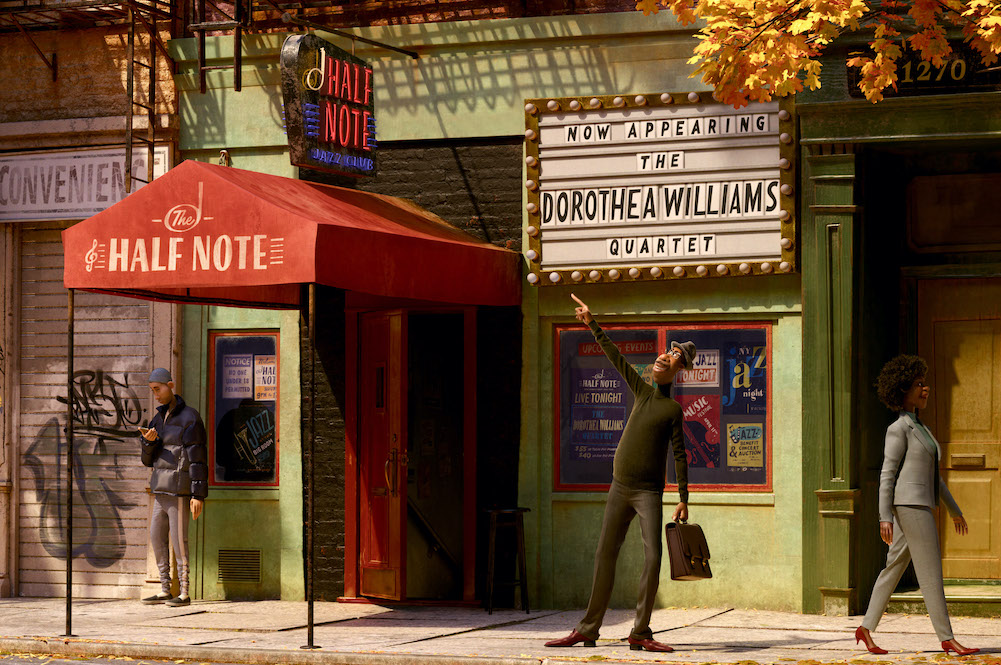 Detail from a scene in "Soul," showing Joe Gardner, a music teacher, getting excited about joining Dorothea Williams' band. (Disney/Pixar)

Delayed from this past summer and just in time for Christmas, Disney and Pixar Studios are releasing an animated feature film that tries to answer the questions: Who am I and where did I come from?

Regardless of your beliefs or lack thereof, these are tough existential questions that we grapple with at some point in our lives. But for single New York City middle school teacher and musician, Joe Gardner (voice of Jamie Foxx), it all happened very suddenly.

Joe teaches band every day but gigs at night on the piano. His mother Libba (Phylicia Rashad) runs her own business and thinks that Joe needs to focus and stop wasting his time playing piano in clubs. But on what Joe says is the best day of his life, he is hired by the famous Dorothea Williams (Angela Bassett) to play with her quartet. Talking on his phone after his audition, he doesn't see where he's going and steps into a manhole.

When Joe wakes up, his corporal body is gone and what seems to be his soul remains. He is walking toward the light on a celestial highway with tens of thousands of others in their monochrome "spirit suits." He realizes that he is going to a place from which he will never return so he turns and runs. He is trying to get back to the world, to his life, because he hasn't yet finished what he is supposed to do.

From the streets of New York, he now finds himself in what the ethereal Counselors ("Jerries") call "The Great Before" where, according to the film's production notes "new souls get their personalities, quirks and interests before they go to Earth." Here, Joe becomes a mentor to a moody soul, 22 (Tina Fey), who has resisted going to Earth for generations because she doesn't see the point of human life. "Is all this living really worth dying for?" she asks, as Joe lets her see the joys of his life and convince her that life is worth living.

In my interview with co-writer and director Pete Docter ("Inside Out") and producer Dana Murray, they explained that the film deals with really big questions about the meaning of life.

Docter was "turning what 47 and coming to the sort of midlife crisis of having spent my whole life building animated films and loving it and still do," he said. "But I was also wondering, is that really all? I don't feel like doing this has fixed everything in my life. It's not like I'm now a happy contented person. So, I asked myself, am I doing something wrong? Am I, should I be looking elsewhere? The film is really an investigation into all of that."

He also said that there is a flip side to this, that "there are a lot of people who grew up feeling like 'I don't know what I'm supposed to be doing with my life. I don't know where I fit in and connect.' 22 personifies this other aspect of people's experience."

This is where the film may delight some mature viewers and consternate others, especially when it comes to philosophy and theology.

Murray explained that they explored many aspects of the meaning of life and interviewed different people, even shamans. And it shows. This gorgeous animated film seems to take all kinds of worldviews about the meaning of life and conflate them into one, without ever mentioning God — or angels that the Jerries could be seen to represent. Instead, the universe is in charge.

But as Docter also made clear in his interview, they are exploring these questions, not trying to answer them. They want people to talk about the meaning of life and know that life is worth living.

The film spends a lot of time with souls being prepared to join their bodies in "The Great Before." The philosopher Plato held that souls were created and existed before conception and birth and that humans were born with knowledge (that they had to relearn). This seems to be a key influence on the film's narrative, though this idea was rejected by the Catholic Church, which teaches that every spiritual soul is created immediately by God at conception. Then again, the prophet Jeremiah says, "Before I formed you in the womb, I knew you, and before you were born I consecrated you." There appears to be room for the imagination here, and the filmmakers take full advantage of this.

As these pre-born souls in the film await their time to come to Earth, they are assigned their identity. The only thing missing is "the spark." Though no one mentions it, the spark seems to come when the soul gets to Earth: birth. We walk with Joe in this "space" as he learns to identify the spark that gives his life meaning. For Joe, it is through self-knowledge that he identifies music as his spark, the meaning of his life. Grammy Award-winning musician Jon Batiste's soulful jazz arrangements help us understand how the art, beauty and joy of music gives meaning to Joe's existence. It is everything to him.

I asked the director why the word or concept of love is only mentioned once in the film. Docter replied that every Pixar film is about love between two characters who finally understand each other. But this time he wanted to go deeper and explore the meaning of life.

"It's not just as simple as loving," he said. "You can nail it all down to the single commandment, to love one another. But I do feel like it's more expansive than just human relationship. I think it is about connection with the world, too.

Docter said he had recently read Fr. James Martin's 2010 book The Jesuit Guide to (Almost) Everything, which is about finding God in all things. "I was really inspired by that. I feel like that's really at the heart of the story of Joe by the end of the film," he said.

I spoke to another Catholic critic who was upset that the film doesn't follow Catholic teaching, that it seems to be pushing a secular agenda, that it hints at reincarnation and pantheism. I can see how someone might think this. To me, however, the film's exploration of the meaning of life and the nature of the soul supports the belief in eternal life and the immanent divine spark in the soul, the human person.

I also think that Joe's story exemplifies the elements of Elisabeth Kübler-Ross's 1969 book, On Death and Dying. Joe certainly goes through all these stages she describes in the book: denial, anger, bargaining, depression, reconstruction, working through the reality of death to acceptance and hope. Someone who is dealing with death and dying can find hope here.

It is unfair to expect a secular film to be a catechism of Catholic beliefs. Disney Pixar films are a business with huge commercial interests, first of all. This film will be seen by tens of millions of people, so members of a very large audience need to find something to connect with, a character, an idea, an experience. The filmmakers have moved beyond just white faces to include different races and many shades of Black and brown.

There are significant themes to consider, too. The film is an ode to teachers (Both Docter and Murray's parents are educators). More than anything, I thought of a person who may be depressed or considering suicide, who may not have discovered the meaning of his or her life, and that this film could offer a spark of hope, an encouragement to look inside for that gift that is you and begin again.

This would be a Christmas miracle.