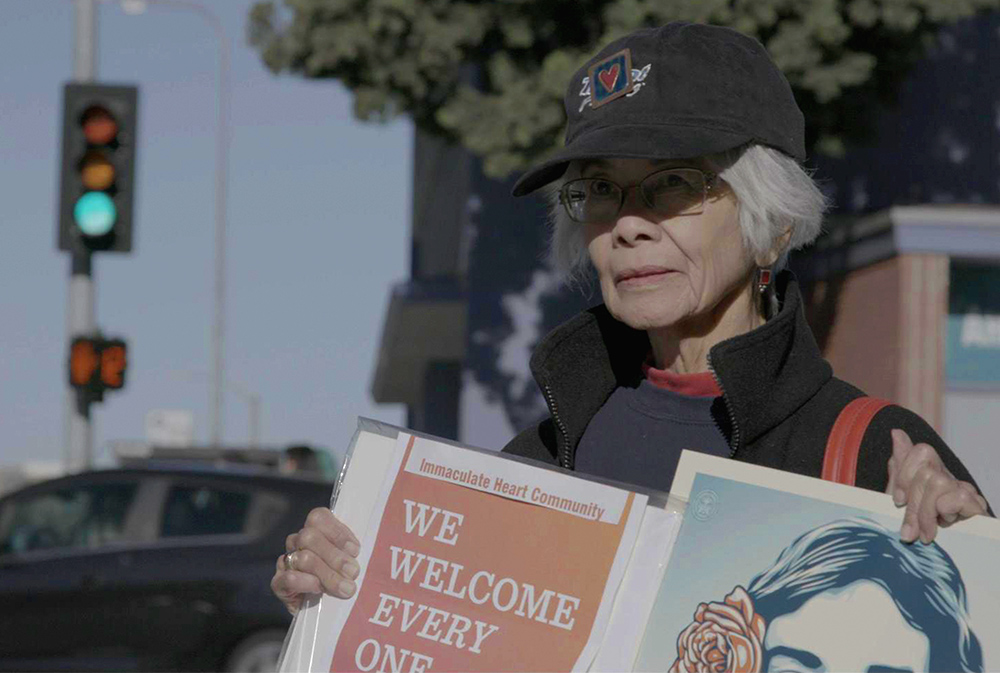 Lenore Dowling of the Immaculate Heart Community at the Women's March in Los Angeles, January 2017 (Courtesy of Merman & Anchor Entertainment)

Pedro Kos's new documentary, "Rebel Hearts," which premiered to a sold-out audience last month at the 2021 virtual Sundance Film Festival, recounts the story of the Immaculate Heart of Mary sisters in the Los Angeles Archdiocese. Director Kos, who is a Catholic, and producer Judy Korin, using extensive archival footage, clever animation and numerous commentators, recount the story of this community during the tumultuous years of Vatican II (1962-1965) until today.

Much of the film's focus, however, centers on the 1960s, when the reputation of the sisters was at its highest.

We see how the sisters marched and spoke out against the Vietnam War and march today for human and civil rights. Lenore Dowling, who taught with pop artist-activist Immaculate Heart of Mary Sr. Corita Kent, gives voice to significant moments in the film. One of the sisters marched with Martin Luther King Jr. across the Edmund Pettus Bridge in Selma, Alabama, in 1965, and this made national news.

In one scene, during their annual celebration of Mary's Day in honor of the Mother of Jesus, they brought in speakers like Jesuit Fr. Daniel Berrigan. These events often made local and national news, which angered Cardinal James McIntyre, the second archbishop of Los Angeles. 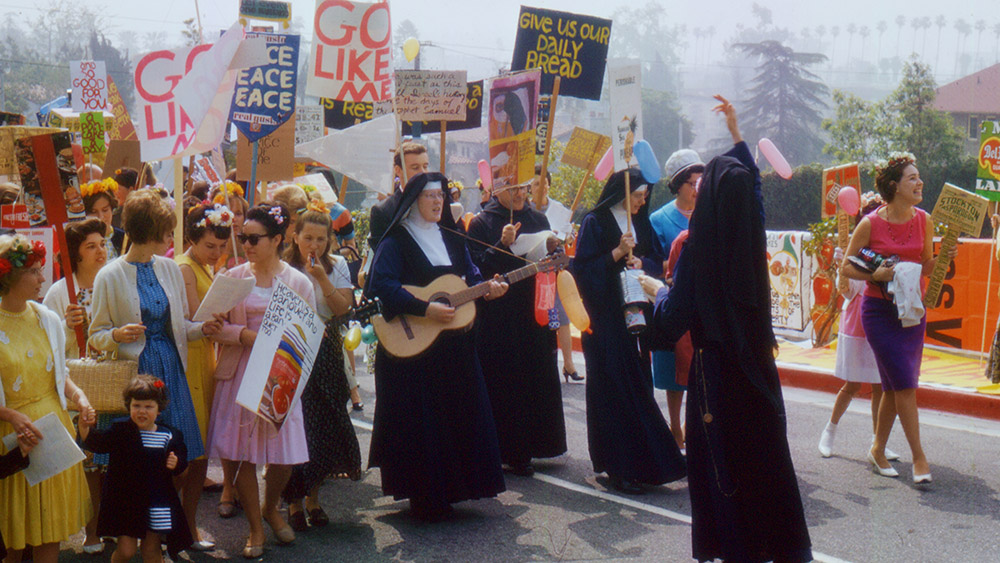 The film presents the tension that arose between the sisters and McIntyre. He was unwilling to dialogue with the sisters and this complicated much of their ministry during this time. The archbishop criticized the sisters, who like many other religious orders, were adapting to the changes of the time. They experimented with their religious habits, lifestyles (think schedules), and ministries.

The community also prioritized educating all sisters to be better prepared and educated to serve the people of God. This conflict challenged the hearts and souls of the sisters and ended their very existence as a religious congregation in December 1969.

I spoke with Korin and Kos about the process of gathering all of the film's extensive footage, including of the drama with McIntyre.

"All the U.S. networks, ABC, CBS, NBC, the U.K.'s BBC, covered the drama between the Cardinal and the sisters, though the sisters already had a media presence through their cultural, academic stature and activism," Kos said. They reached out to various broadcasters and former sisters who generously shared their content and stories. They used materials like school newsletters, photos and audio recordings of the community from the 1960s, including recordings of Kent.

The film captures very well the activities of Kent, a skilled art educator and renowned artist, as one of the first objects of the cardinal's ire. He found her art sacrilegious, even pieces that won awards in the 1950s, never mind her modern approach to Christmas card art in the '60s.

As I watched the film, it occurred to me that Kent was the external expression of what was going on in the community internally.

"She captures the story of the community, she was the tip of the iceberg, a light shining to the world," Kos said, adding, that she became a pop icon because she understood what she could contribute to their ministry.

"The community shepherded her to obtain degrees in art," Kos said. "The IHMs educated these sisters to be women of conscience, and they taught their students to be people of conscience, to be leaders and live out the Gospel in the world."

Despite what the title might suggest, the community did not set out to be rebellious. The sisters, as archival interviews with the superior general (and first president of the Immaculate Heart Community) Sr. Anita Caspary make clear, wanted to do what the church was asking of them. Yes, they pushed back firmly against the cardinal's misplaced interference, and chose to be committed women of conscience in a changing world. They asked for assistance from the hierarchy of the church, which admitted the need for pastoral change in the modern world, but who withdrew their support and left the sisters virtually alone to face the attacks against them.

A clip from the documentary "Rebel Hearts" (YouTube/RebelHeartsFilm)

"They had this covenant to be part of the world, to dig deeper and think beyond certain assumptions. The film is a meditation on change, on the work of change," Kos said. "It reflects society today, where we are, and who we are. I think Sundance saw this parallel and became excited about the film. That it is a women's story is part of it, but the themes about a group of people who discover that what they believe offers opportunities for change in an institution, and that working from their fundamental values and faith, they can move forward in the world."

Korin added that watching a community of women overcome difficulties, especially amid a global pandemic, will resonate with viewers — and it is the reason, she believes, it was included as part of this year's Sundance.

Toward the late '60s, through their chapter decrees, the community demanded that their sisters, who as yet did not have basic degrees, leave the classroom to obtain them; that their huge 80-student classrooms sizes be reduced; and that they be paid a salary, assured by contracts.

This the cardinal could not accept, as the Immaculate Heart of Mary sisters staffed most of the schools in the archdiocese. In December 1969, they were given an ultimatum: Do as the cardinal determined or ask to be dispensed from their vows.

While 51 sisters remained (one group that went to Wichita in 1976 is flourishing, though the film does not mention this), 155 sisters left the community definitively, and 300 members formed the ecumenical Immaculate Heart Community, made up of men, women and families. That community continues today, moving forward in service toward the future.

A month later, in January 1970, the Vatican asked for McIntyre's resignation. He was 84 years old.

This film is an informative, inspiring and entertaining documentary that tells an important story about a small yet highly influential part of the history of the U.S. Catholic Church. The archival footage is wonderful, really, and for those of us of a certain age, we will recognize much of it. For those who came after the events told in this film, there are many things to note and appreciate.

Toward the end of "Rebel Hearts," the filmmakers focus on women's ordination, a decision Kos describes as "part of the meditation on change" that drives the film. It was important to highlight, he added, that two women within the community also felt the call to be ordained priests in an institution that does not allow this. This is the only part of the film that seemed less objective.

Kos told me that they were considering placing a card at the end of the film noting Cardinal Roger Mahony's 2000 apology to the sisters over how McIntyre treated them. Though many years had passed by then, the community accepted this apology with grace, as is their way of being.

"We didn't want the entire story to be backward-looking but rooted in the present and a glimpse of what the future of the movement might be like," Korin told me. "To see what is on the horizon and plant seeds for conversation. As Lenore Dowling says, 'A movement is a movement and by definition it keeps going. The work never ends.' "