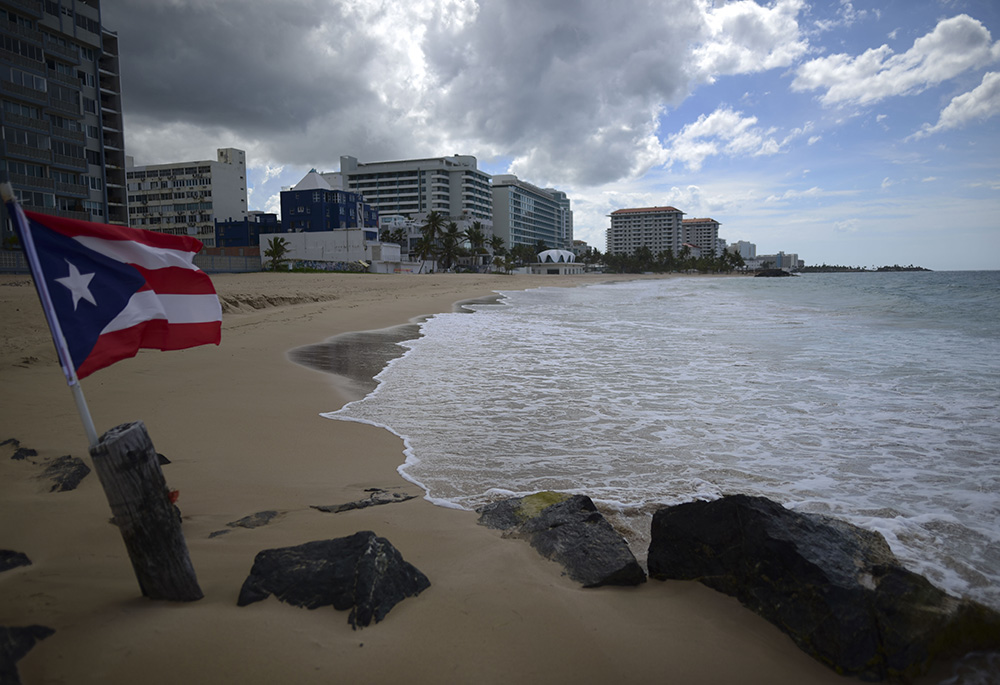 A Puerto Rican flag flies on an empty beach at Condado Beach May 21, 2020, in San Juan, Puerto Rico. Puerto Rico’s nearly five-year bankruptcy battle was resolved Jan. 18, after a federal judge signed a plan that slashes the U.S. territory’s public debt load as part of a restructuring and allows the government to start repaying creditors. (AP/Carlos Giusti, File)

Last week (Jan. 18), Judge Laura Taylor Swain approved a debt restructuring plan for Puerto Rico that was the culmination of five years of negotiations and legal challenges. The deal, which was overseen by a federal oversight board first appointed in 2016, dwarfs earlier bankruptcy cases and navigates the especially fraught legal and political terrain caused by Puerto Rico's status as a U.S. territory.

"The court's confirmation of Puerto Rico's plan of adjustment completes the largest public debt restructuring in American history — far bigger than Detroit, the next biggest restructuring," David Skeel, the chair of the oversight board, told me in an email.

"The plan sharply reduces the amount of debt Puerto Rico will have going forward, and every dollar of Puerto Rico's $50 billion of unfunded, accrued pension obligations will be paid in full," he said. "These features and other protections — such as a pension trust to help fund pension payments — will ensure the problems of the past no longer burden Puerto Rico's future."

The causes of the fiscal crisis were many. Part of the problem, as in most cases of sovereign debt, is that bond markets have been governed by neoliberal economic premises the past 40 years, and those premises often lead to inhumane results. Part of the problem has been the widespread corruption of the public sector on the island. Part of the problem was the departure of pharmaceutical factories that benefited from tax provisions that expired over 10 years from 1996-2006, and that fled to other locations once those tax benefits ceased to exist.

Puerto Rico's economy was on its heel before the Great Recession of 2008. In 2015, the government announced it could no longer pay its bills and the federal oversight began.

Skeel also pointed to the role that the island's religious leaders played in the long process of recovering from the bankruptcy. "Archbishop Roberto Gonzalez [of San Juan] and Reverend Heriberto Martinez [head of the Bible Society of Puerto Rico, the leading evangelical association] have played an essential role at every stage of the process, both before and after Congress enacted the legislation that made the restructuring possible," Skeel told NCR.

"They have been a powerful and persistent voice for the most vulnerable Puerto Ricans — the least of these — whose views too often are not represented when major economic decisions are made. They have constantly reminded the participants that debt forgiveness and other economic issues are moral issues, and that it isn't accidental that Jesus so often framed his teaching in economic terms."

Eric LeCompte, executive director at Jubilee USA, which advocates for debt relief for developing countries, concurs with Skeel's assessment as to the significance of the deal. "While some smaller portions of Puerto Rico's debt still need to be restructured, roughly out of the $72 billion in debt about 55% of the debt was cut," LeCompte said. "In comparison, the previous largest municipal bankruptcy was Detroit and the city saw its debt cut by 38%. We also saw innovations that protect Puerto Rico, its pensioners and people living in poverty."

LeCompte also agreed with Skeel about the pivotal role played by religious leaders, both on the island and in the states. "At Jubilee USA we were privileged to walk with Archbishop Gonzalez and Reverend Martinez on this journey, and we saw a historic mobilization of U.S. and Puerto Rico religious groups aid the people of Puerto Rico," LeCompte said. 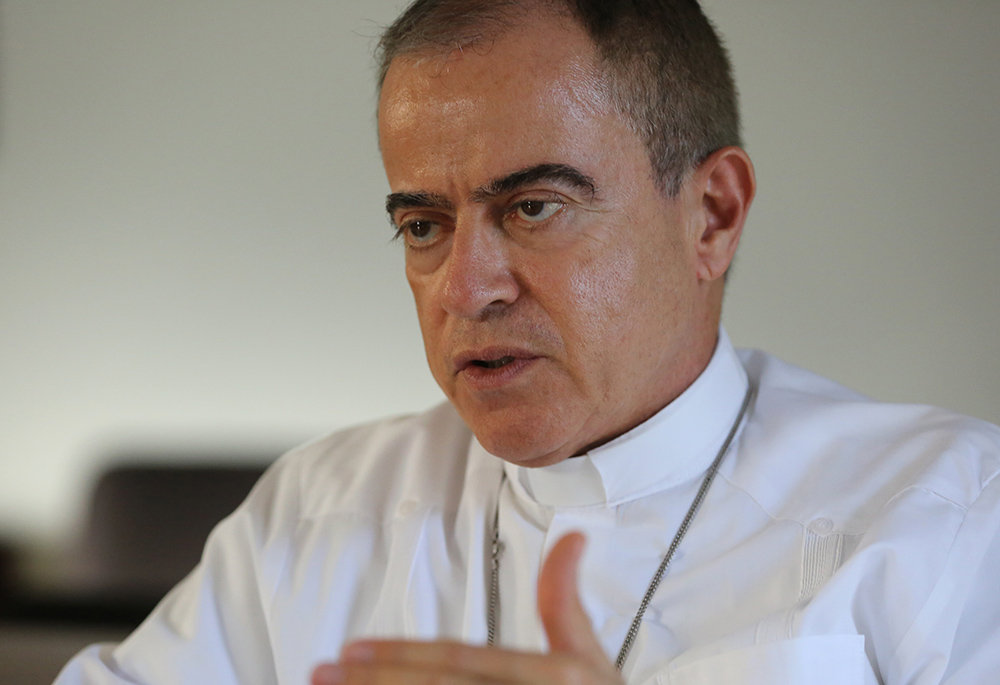 "The leadership and mobilization of the US Conference of Catholic Bishops and Catholic Charities was absolutely incredible," he added. "New York Cardinal Timothy Dolan and other bishops raised their voices for Puerto Rico. That support from the Catholic bishops and the Episcopal, Lutheran, Methodist, Presbyterian and United Church of Christ churches continues to this day."

Full disclosure: Early on in the Puerto Rican debt crisis, I asked Archbishop Gonzalez if he knew LeCompte and helped arrange their first meeting. I hope that when I stand before the judgment seat of God, and the angels have grown tired of listing my catalogue of sins, one of them will pipe up and cite this one good deed in my favor!

It is impossible to overstate the importance of LeCompte's ability to combine biblical values with detailed knowledge of both the economics and the law surrounding sovereign debt. "Basic services like the police, public schools and municipal hospitals were left almost inoperable," said Archbishop Gonzalez, recalling the bankruptcy crisis in 2015. Gonzalez convoked a meeting of religious leaders on the island, "to try to identify a way in which we could be of service to this country."

"None of us had either the experience or the knowledge of how to engage ourselves in a constructive way to serve the common good of our people," Gonzalez said, "until we learned of Eric LeCompte, the executive director of Jubilee USA." The archbishop acknowledges that the plan will involve some more pain, but that the protections for programs that assist the poor and for workers' pensions were an important victory.

Will it be enough? That is harder to know. "The debt can be sustainable and we can tackle social problems on the island if we can raise revenue on the island and ensure disaster and economic aid are approved by Congress," LeCompte told NCR. "Our work continues to expand manufacturing jobs in Puerto Rico and win another $55 billion in disaster relief. Puerto Rico needs to get the same funding as U.S. states for nutrition, child poverty, health, disability and tax relief programs."

Damon Silvers, policy director at the AFL-CIO, thinks that what is still needed is an industrial policy for the island. "While the bankruptcy is not perfect, it is a step forward," Silvers told NCR. "Until there is a viable economic and industrial policy in place, however, it is unclear if any debt strategy will be viable."

He mentioned sustainable energy as the obvious candidate for rebuilding the island's economy. Gloria Gonzalez at Politico said the same thing in December, and I made a similar case back in 2017!

Interestingly, the critics of the original creation of the federal oversight board and of the final debt restructuring deal fall into two categories. On the woke left are critics like MSNBC opinion columnist Julio Ricardo Varela who condemned the deal as the bitter fruit of colonization — "the restructuring is just the latest example of an utterly failed colonial experiment"—but offered no actual solutions to the fiscal problems facing the island. His criticisms are delivered in the language of the academic left, not the language of the Puerto Rican people and its actual leaders.

The other principal critics are the hedge fund managers who purchased Puerto Rican debt at deeply discounted rates when it was apparent that the island's government would not be able to repay it, and who have pursued legal strategies to stop the restructuring. The bankruptcy deal did not reward the vulture funds.

Explains Skeel: "The plan also provides fair treatment for creditors and other constituencies, paying more to creditors whose debt is unquestioned than to more legally problematic debt."

Neoliberal economics will not be dismantled in one, full swoop. No debt restructuring deal will ever be perfect this side of the eschaton. Puerto Rico must still develop a political culture that is allergic to corruption. An industrial policy is still needed.

When aided by the kind of expertise developed by LeCompte and the staff at Jubilee USA, religious leaders can still make a difference in their support for public policies that help the poor and serve the common good. I hope Gonzalez' example might prove a model for the U.S. bishops' conference going forward.