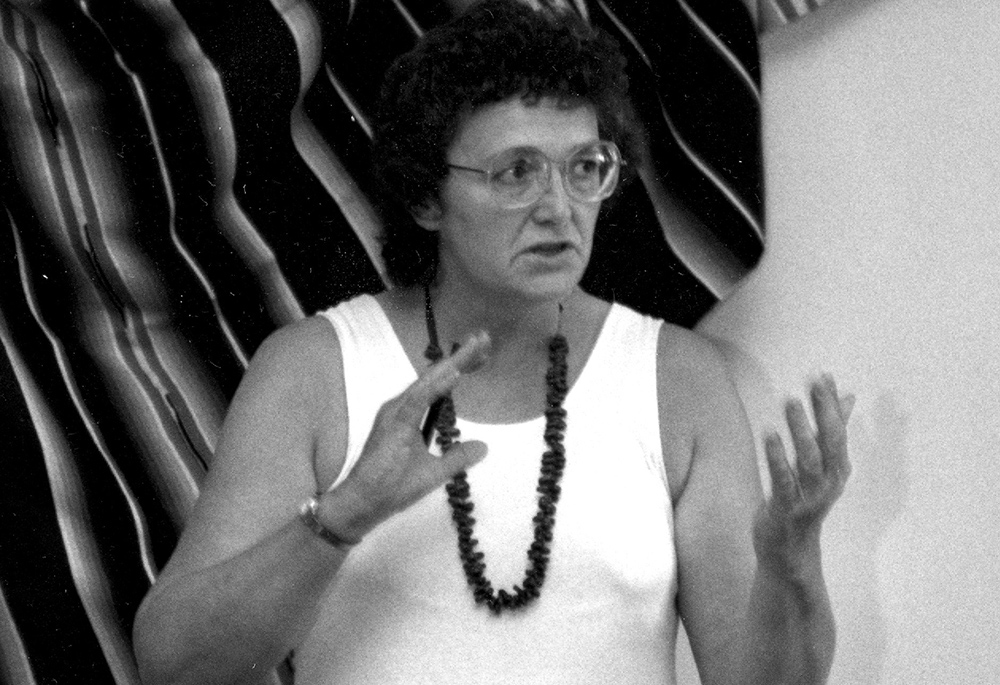 Weeks before a catastrophic stroke silenced Rosemary Radford Ruether in 2016, one of the Catholic Church's most prophetic voices, she invited me to listen to a presentation of her doctoral students' final class presentations. Her legacy was apparent in the critically engaged and creative theological work of the new scholars, even though she was no longer presenting papers in European theology universities or teaching workshops crowded with feminist students.

As we drove back to Pilgrim Place retirement community, I remembered my own days of graduate theological teaching at Harvard Divinity School in the late 1970s when women students in despair of patriarchal recalcitrance were leaving their faith traditions. Rosemary's work as a Catholic feminist and liberation theologian saved my faith. In fact, I'd come to Pilgrim Place because I trusted Rosemary's radical commitment to communities of social justice.

She never wavered in that practice. In spite of authoring or editing close to 40 books, giving talks at the University of Fribourg or U.S. universities, teaching full time at Garrett-Evangelical Theological Seminary and leading solidarity trips to Palestine or Nicaragua, when we (members of the National Assembly for Religious Women, women's gatherings or the Chicago Religious Task Force on Central America) called upon her for a theological statement, we had it the next day … and she marched.

Her consistency was, as she said, because her work was initially shaped by the Black Power movement. In 1965, while her children were still young, she felt called to go to the Mississippi Delta for a summer. The summer before three civil rights workers were murdered. As Rosemary and students drove their battered car across the Mississippi state line, she confronted her fear. As she told the Religion and the Feminist Movement Conference at Harvard Divinity School in 2002, "I started thinking I might die and I decided I had to face that."

It was not the first time she made that decision.

Weeks after Rosemary's last class, a voice of such vigor, depth and passion was no more. Paralyzed on the right side and with aphasia, Rosemary was confined to a wheelchair, on a feeding tube and voiceless. The extent of injury was profound, yet she was able to paint a garden scene while visiting her friend Ann Wire, a biblical scholar. She enjoyed going to vespers and Women Church at Pilgrim Place, reached out to hold hands, and listened and laughed with friends, family, former students and colleagues, and caretakers. She got stronger with physical therapy and eventually was taken off the feeding tube.

There is so little medical understanding of how the brain is affected in global aphasia. Looking into her brown eyes you searched for the brilliant, wry, amused and ceaselessly curious intellectual who charged and changed the Catholic Church, but she remained a mystery, as is her illness. The tragedy overwhelmed her family. But there was a mercy. A serious intellectual, it was as if a demanding cloak had been lifted from her shoulders. Rosemary smiled. She looked you in the eye and she smiled.

For the next six years she enjoyed the purple sage trees that were in bloom in spring or summer when pushed in her wheelchair through the Pilgrim Place compound. Her voice was silenced, but not her work. So many young theologians and church historians have been shaped by her trailblazing and courageous writing.

Few scholars had crossed so many disciplines. Rosemary studied patristics and classics, was grounded in a historical-critical sociology of knowledge — she used these analytical skills to integrate liberation and feminist theologies and practices. She risked job security and personal danger … a scholar activist, unique, uncompromising, an Old Testament prophet whose intensity and brave scholarship opened doors that Vatican II had not dared.

I wrote this poem for Rosemary some years ago:

The Chispa* Carrier: For Rosemary Ruether

She came to prison with a key. The way forward,
she said, is behind us. With only a spoon of history
she gutted a tunnel that ran below the plazas of princes.

We sat waiting behind bars: moldy histories, slop theologies
in mush bowls shoved under cell doors. Eat this or starve.
We prayed for a deliverance we could not name.

We imagined her walking through deserts, our prophet
searching sand for bones, pouring through ancient scripts,
gospels, archives, dank stacks of basement libraries,

reliquaries with their throb of real blood.
We rattled the bars: Can she pick locks,
can the past be more than our requiem?

She kept digging until truth slithered forth,
a sacred snake that recalled the hour of women.
It was our singing, she said, that opened tombs.

*Chispa is Spanish for spark.