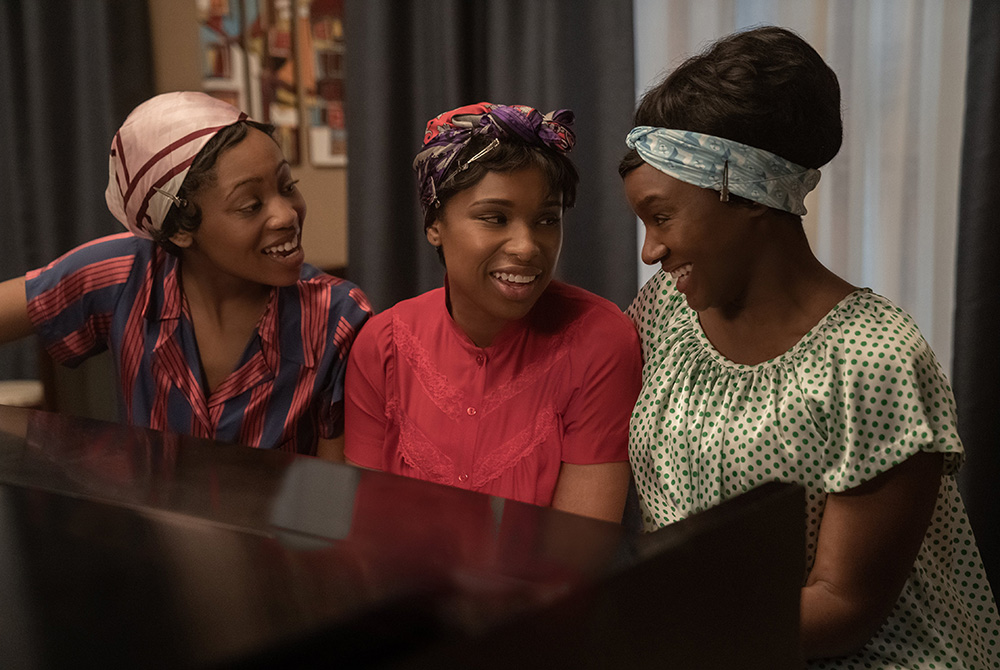 As a child, Aretha "Re" Franklin (Skye Dakota Turner) lives with her domineering father, the Rev. C.L. Franklin (Forest Whitaker), in Detroit, along with her siblings and their grandmother, Mama Franklin (Kimberly Scott). Re's musically talented mother, Barbara (Audra McDonald), and father are divorced, but the children get to visit her sometimes.

The family is well off due to the Rev. Franklin's pastorship of the New Bethel Baptist Church. He brings Re to sing at church because he recognizes her musical genius. She plays the piano by ear, but this is just the beginning.

There is tension in the family as well as much love and stability provided by Mama Franklin. Their home is also at the center of the growing civil rights movement. Early on, Re learns that the church and human rights have one voice. The Rev. Franklin is friends with Martin Luther King Jr. (Gilbert Glenn Brown), too. Later, Re will sing at his fundraisers.

Just before Re turns 10, she is shocked when her beloved mother dies suddenly. When she is 11 years old, her father wakes her up during one of his parties and brings her downstairs to sing for his guests. One of them follows Re afterward and rapes her. She has her first child at the age of 12.

A few years later, she has another child, fathered by the same man. No one at home talks about Re's trauma, and it follows her for years.

In 1960, when Re is 18, she convinces her father to move to New York to record. Her sisters Erma (Saycon Sengbloh) and Carolyn (Hailey Kilgore) become her backup singers. Erma also collaborates on writing songs.

Friends encourage Re to go with Motown instead, right in Detroit, but she wants to go her own way. Acting as her manager, the Rev. Franklin oversees her contract with Columbia Records and producer John Hammond (Tate Donovan). After four unsuccessful albums, Dinah Washington (Mary J. Blige) urges her to sing songs meaningful to her.

In 1966, Re decides to sign with Jerry Wexler (Marc Maron) at Atlantic Records. By this time, Re is married to Ted White (Marlon Wayans), and they have a son. White wants to control her recordings with his choice of a band, but Wexler chooses an all-white band in Alabama called the Muscle Shoals.

Even Re is shocked, but she quickly realizes their talent, and Atlantic releases her first gold album, "I Never Loved a Man the Way I Loved You." Hits such as "Chain of Fools" and "I Say a Little Prayer" follow. "Respect" is an Otis Redding song, but Aretha's version becomes her signature song, and fans consider it an anthem for civil rights and women's rights.

Things end for Re and Ted on a European tour, and Re seeks comfort with tour manager Ken Cunningham (Albert Jones). They have a child together, but Re struggles. She is becoming an alcoholic and cancels many performances, which threatens familial and professional relationships. She is heartbroken when Martin Luther King Jr. is assassinated, and sings at his funeral.

After a move to Los Angeles in 1972, Re is depressed and seems to lack focus. She walks into the church pastored by the Rev. Dr. James Cleveland (Tituss Burgess). In a transformative, almost mystical moment, Re begins to sing "Amazing Grace."

She decides to record a live Gospel album in the church. Everyone says no one will buy it, yet "Amazing Grace" becomes her best-selling album ever. Wexler suggests that they make a documentary go along with it. Aretha makes him admit that the purpose is to explain Gospel music to white people. It is a brilliant decision.

Though Re's family has material goods, she does not raise her four children, and lasting happiness is elusive. From the age of 12, she had been on the road with her father; he preached, and she sang. She came to dislike this arrangement intensely, and later, when her career at Columbia flounders, she refuses to start singing with her father in churches again. Re is estranged from her father for a long time when she begins to drink.

Re does things other female artists do not. She takes over management of her career when her marriage to Ted White ends. She insists that producers treat her with respect and call her "Ms. Franklin."

She was a civil rights activist and was once imprisoned in Detroit, though this is not in the film.

Jennifer Hudson, Aretha Franklin's own choice to play her in a film, is brilliant.

Her acting is so believable, and the singing is almost perfect. Hudson can inhabit the role of Aretha so wholly because she feels Aretha's pain and loss. (Her sister's estranged husband murdered Hudson's mother, brother and nephew in 2008.)

She deservedly wears the Queen of Soul's mantle. The soundtrack will be a must for those who love Franklin and the 2007 Oscar winner "Dreamgirls," which earned Hudson an Academy Award for best supporting actress.

Though the film is about 20 minutes too long and the pace deliberate, I can hear accolades and see awards lining up. Hudson sings some of the songs in their entirety, but we get mostly snippets of the more popular ones. The makeup for Whitaker as a younger man is uncanny; he plays the hypocritical, domineering and sometimes conflicted father too well.

McDonald's onscreen time as Barbara Franklin is brief, but she is a beautiful, talented and loving mother. The costumes are amazing. I loved how Scott, as Mama Franklin, gentles the home and cares for her grandchildren and eventually great-grandchildren, sacrificing herself completely.

Maron is also outstanding as the wily but kind Wexler. I liked the scenes with the session musicians the best because they let us marvel up close at the love and talent that goes into making and recording music.

The themes of rape, domestic violence, family, faith, racism, civil and women's rights, and music as transformative art permeate the film. Emmy-nominated South African-American Liesl Tommy, known for her direction work on shows like "Jessica Jones," directed the film. The script is by Tracey Scott Wilson ("The Americans"; "Fosse/Verdon") and based on a story by Oscar-winning writer Callie Khouri ("Thelma & Louise").

In the flash of an eye, the film moves from Re's busy, sometimes frenetic outer life to her soulful inner life. This sacred moment is when she is at her lowest and begins to sing "Amazing Grace." It comes at the end of the film, but this profound moment shows her connection with God and centers this beautiful, pain-washed Gospel melody of life.