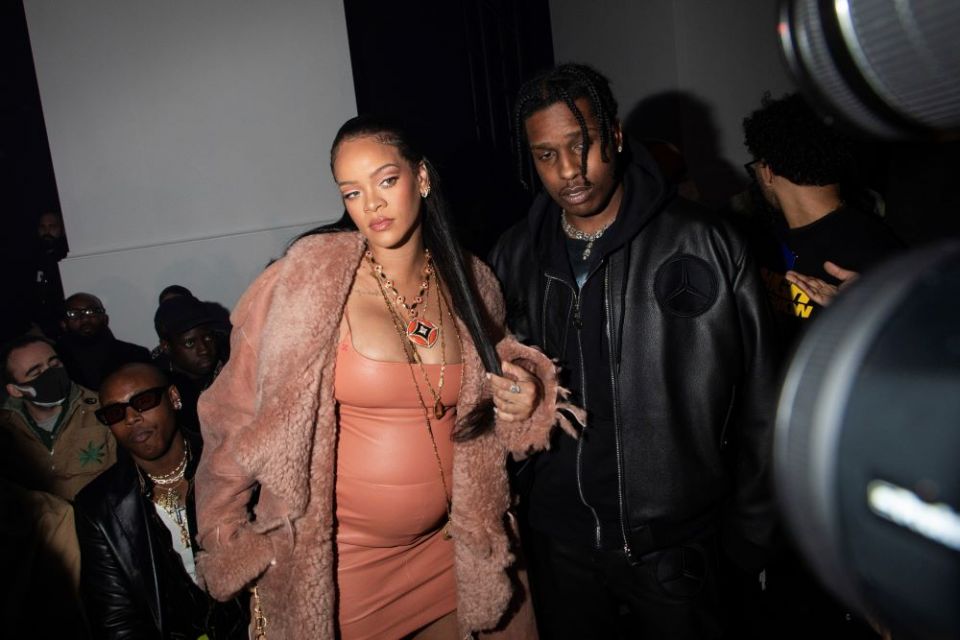 On Jan. 31, a pregnant Robyn "Rihanna" Fenty was photographed in New York City for the first time. She posed alongside her partner, rapper A$AP Rocky, in his native Harlem and wore denim, heels and a pink down coat fully open, except for one button, over her taut, brown belly. Over her upper body, right above her belly button, was a long necklace with a gold cross, adorned with a variety of colored jewels, at the center.

Since the first photograph was published online, images of the pregnant Barbados-born singer-songwriter are everywhere, and all are striking. In almost all the photographs, Rihanna continues to bare her swollen stomach, a public rejection of traditional maternity wear. Rather than wearing billowy shirts and dresses or jeans and pants with elastic waistbands, the artist dons metallic fringed halter top with matching metallic pants, silver long-sleeved bralettes and sheer, lacy black gowns. Many of her outfits are see-through, and all accentuate the roundness of her stomach.

While Rihanna isn't the first Black woman, let alone the first woman, to show her bare baby bump to the world, she unabashedly presents the Black life growing inside her — and in doing so, she invites witnesses to come celebrate life in all its sacredness, fullness and Blackness. She bids us — as the poet Lucille Clifton does in "won't you celebrate with me?" — to come and celebrate what she has shaped into and what is shaping inside her.

Rihanna has quickly grown to stand out as a symbol of pregnancy in a society and church that still whitewash womanhood and maternity. Historian and curator Karen Hearn's book Portraying Pregnancy: From Holbein to Social Media demonstrates how pregnancy has largely been portrayed as the experience of white European women from the Visitation portraits of Christianity to the late 18th century Victorian-era portraits. We do not see women of color represented in pregnancy portraiture in the public sphere until the late 20th century — 1988 to be exact. This is when Neneh Cherry, the Swedish singer best known for her hit song "Buffalo Stance," stands with her bare belly bulging out of an unzipped jacket in a photograph featured at London's National Portrait Gallery. 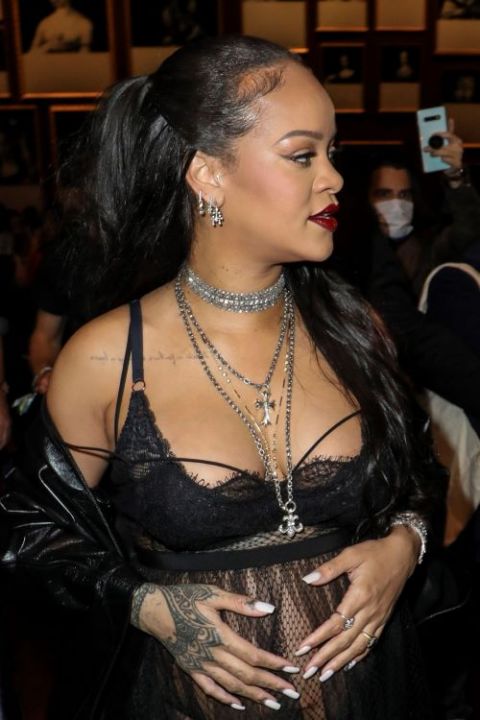 Nearly 35 years later, we are in a new and welcome era of pregnancy portraiture centered around Black women's bellies and bodies.

Before Rihanna's unzipped jacket, we saw Beyoncé in her record-breaking Madonna-esque twin pregnancy spread in 2017. That same year, Serena Williams posed pregnant and nude on the cover of Vanity Fair, and in 2021, Cardi B posted a photograph on Instagram featuring a nude side-profile, with her belly covered in what looks like white paint. Like Cherry before them, these images rupture the norm of Eurocentric representations of pregnancy and embodiment. These Black celebrity women expose themselves to the global gaze and share with the world the delicate, tenuous process of Black pregnancy and childbearing.

During her second pregnancy, Beyoncé developed preeclampsia, and during the birth of her daughter, Serena suffered a pulmonary embolism and almost died during an emergency C-section. Both women have resources and privilege most Black women worldwide do not have. Publicly sharing the pregnancy complications they faced despite their access highlights how unequipped our health care system is to address the health issues of Black women, especially those related to our reproductive health.

Though Black women's reproductive history does not begin with chattel slavery, we know too well that it is marked by it. Black women are among the most reproductively oppressed groups, living through being forced to birth children for labor while being unable to actively care for their own. Womanist theologian Delores S. Williams gives voice to the unique characteristic of Black women's oppression when she talks about the coerced and voluntary surrogacy of Black women during the pre- and post-Civil War eras. As surrogates, Black women were either forced by people more powerful than they to function in roles someone or no one would fulfill, or they were expected to trade maternal labor for a pittance to survive.

Throughout the 20th century, Black women's reproductive capacities were threatened by coerced sterilization and eugenics ideologies and processes such as the North Carolina Eugenics Commission, which sterilized 8,000 people, 5,000 of them African American and primarily women under 20. Under our current health care system, Black women are three times more likely to suffer fatal consequences from pregnancy-related causes than White women, more likely to die from complications after birth and, due to racial bias in medicine, more likely to have pain ignored by doctors. Black women are also more likely to watch the children they are raising subjected to all manner of bodily and soulish violence.

Black women have never experienced a smooth road to reproduction. Given this troubling history and the current reality of Black women's reproductive lives, a Black woman's pregnant body in the public sphere sometimes feels like an aberration because of the many ways life —conceiving it, birthing it or seeing it live into flourishing — is not always guaranteed. This makes Rihanna's current passage through pregnancy a sight to behold.

We are all Elizabeth and we must all jump for joy and celebrate, pray fiercely for the mother and child, and all Black women and children everywhere.

Unfortunately, it is not just the U.S. health care system that neglects Black women's reproductive hopes and dreams; our pro-life Catholic Church ignores them as well. Issues related to the reproductive health of Black women in the United States are rarely addressed by our pro-life church leadership or the mainstream pro-life movement. Despite this, Black Catholic women crave and deserve representation — even holy reverence — of the Black pregnant woman.

In North America, we generally turn to the Blessed Virgin Mary, who is often depicted as white. Only in certain U.S. cities with large Black Catholic populations, such as Atlanta where I live, or throughout cities in Latin American and African countries, are there shrines of the Black Madonna. The Black Madonna is a symbol of power, and her veneration is common among BIPOC communities. Despite her significance being ignored by many in the American church, including our leadership, it is vital that we recover the Black Madonna to show her agency, strength and power for Black North American women of faith. She stands, as sociologist Janet Michello writes, as a "symbol for everyone; she is nurturing and 'counters racism and sexism.' "

Michello adds: "Viewing the Madonna as non-white rejects the patriarchy of dominant religious thought and supports the idea that Madonna is a powerful figure. … It is the return of the African divine feminine that can assist in achieving equality within Abrahamic religious and other societal institutions." When we recover the Black Madonna as a significant figure of representation and devotion for Black women, we give Black women a mirror to view themselves and their possibilities.

This makes Rihanna's current passage through pregnancy a sight to behold. Her pregnancy is a celebration of life that encourages us to consider how to celebrate Black pregnant joy as Catholics and fight for the representation of Black pregnant women in our society, especially within our churches. Like her peers before her, Rihanna shows us how she is enjoying her being as another being is nurtured within her. Making Rihanna's bare pregnant belly a regular occurrence normalizes Black women's reproductive possibilities and Black women's bodily agency — things that the world does not permit Black women to have. It says, "You are going to get this Black belly and forthcoming baby and love it."

Rihanna and all Black women bid us to dwell with them in the liminal space between conception and birth. I am inspired by what Rihanna and other Black pregnant women demonstrate and portray when they announce pregnancies and share their journey, however their bellies show up. I sit like Elizabeth hearing the greeting of pregnant Mary. The spiritual baby inside of me jumps for joy at the possibilities and hope that dwells within the bulbous bellies of Black women. I also celebrate that Rihanna is performing a bodily demonstration of her hit song "We Found Love" by showing what it looks like to grow love in a place that sometimes seems bereft of hope. And I generally celebrate seeing a Black woman pregnant with what she desires in this world —whether it is a baby, a book or a business — because we ought to spend more time being midwives to Black women. This is where the sacrament of pregnant joy enters.

We must behold and uplift the portrayals of pregnancy that the world offers us, from Rihanna to Beyoncé to the countless Black women having babies everyday whose names we might never know. We are all Elizabeth and we must all jump for joy and celebrate, pray fiercely for the mother and child, and all Black women and children everywhere.

At a time when things seem hopeless, let us hold onto the strong possibility that we can still find and grow love in a hopeless place. Let us pray and fight for a world and church that fully affirms the possibilities and hope of Black motherhood, Black womanhood — Black life.

A version of this story appeared in the May 13-26, 2022 print issue under the headline: Pregnant joy . 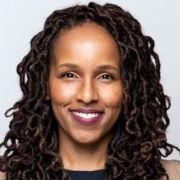 Nicole Symmonds is the visiting assistant professor of Christian ethics at the McAfee School of Theology and a Louisville Institute Postdoctoral Fellow. Her current research explores the role of Evangelical Christian whiteness in anti-trafficking work. She received her Ph.D. from Emory University’s Graduate Division of Religion, an M.Div from the Candler School of Theology, and a B.S. in journalism from Florida A&M University.

Editorial: This Advent, our church must commit itself to anti-racism work