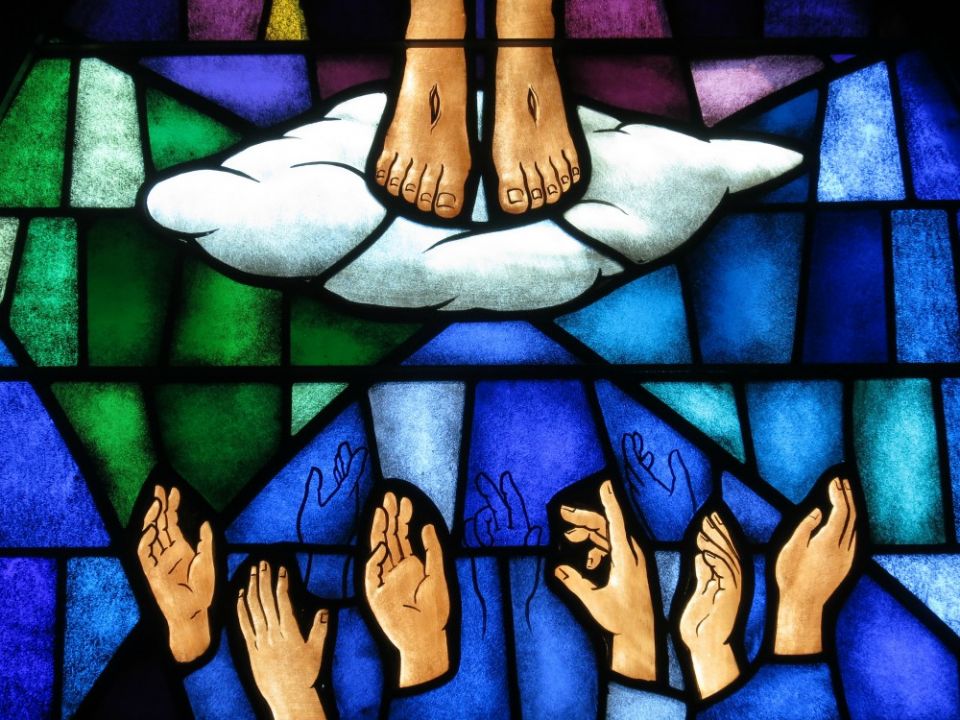 The opening story of the Acts of the Apostles explains that Jesus was "taken up" out of the sight of his followers. Introducing what we call the Acts of the Apostles, Luke tells anybody who will answer to the name Theophilus (lover of God) that his first volume, what we call the Gospel of Luke, dealt with all that Jesus had done, and that this volume is intended to show how Theophilus-style Christians carry on from there. For Luke, that began with Jesus' Ascension.

Have you ever imagined the scene of the Ascension? How would it have felt to be there? Like anything that a group of people experiences, there are different versions of it. In the New Testament, Luke gives us the most detail, and the Gospel of John does not even mention it.

Solemnity of the Ascension of the Lord

If we allow artworks to pique our imaginations, we'll find a wide variety of images and perspectives, each communicating its own take on the meaning of the event.

One of the oldest depictions shows a heavenly hand coming out of the clouds to draw Jesus from the mountaintop into the clouds, sort of the ultimate result of what we see in Michelangelo's creation of Adam.

Others highlight the distinction between the realms of heaven and Earth, one showing Christ in transition with his lower body in a shadowy vale of tears while his upper body enters a realm bathed in light and populated by astounded angels and body-beautiful humans welcoming their scarred and conquering savior.

Rubens and Salvador Dali both feature the view from below, focusing on Jesus' feet as he rises from our abode.

It would be interesting to ask Luke himself which of the hundreds of artworks he would choose to illustrate the story he tells in the Acts of the Apostles. My guess is that he would tell us that no portrait can do justice to his story. He would explain that his narrative is verbal rather than visual so that people of every age can better connect it to their own era.

Different depictions, be they verbal or visual, illustrate different angles of a truth that can be understood and applied in a variety of ways. The emphasis, as in the hand from heaven, may be on God's initiative drawing Jesus' into the glorious union of the Trinity. Another image might concentrate on the disciples who knew Christ in the flesh, now feeling at least a bit abandoned. Jesus may be depicted as looking toward heaven or as blessing those from whom he is departing. The Earth may be portrayed as a domain from which everyone hopes to escape or the cradle of a slowly blossoming reign of God.

Luke designed the narrative that begins with the Ascension to hint at something of all of these for the variety of Theophilus communities who would read his work.

The scene of the Ascension draws to a close with the disciples staring at the sky. We might picture them with brows furrowed, palms raised and wobbly knees: a communal incarnation of the question, "What now?"

That's the cue for the angels' appearance. "Why are you looking at the sky? This Jesus who has been taken from you will return in the same [mysterious] way as you have seen him going."

The proclamation calls the disciples back to their last conversation with Jesus and all the conversations that went before it. In their final encounter with the risen Jesus, they had asked, "Are you finally going to establish the kingdom we have been dreaming of?"

He responded — for the thousandth time — "It is not for you to know or determine what the Father will do. Wait for the Holy Spirit."

We are all a bit like the disciples at the Ascension. We want to answer to the name Theophilus. We've had our moments of feeling certain, of knowing Christ's love and the presence of God in our lives.

Like the disciples after the Ascension, we've also known moments of wondering why God seems to have disappeared, leaving such a trifling group as us to carry on the mission.

Today, we are called to remember who we are. We are the baptized. We have received the Spirit. Yet our temptation is to keep looking to heaven instead of trusting Christ's judgment and taking the mission into our own hands.

Most of all, as a Theophilus community, we have been entrusted with Jesus' mission for our time and place. Paul tells us that we can live a life worthy of our call. As Luke shows us, the Ascension is just the beginning.

The angels would tell us what they told the group on the mountain: "Stop looking up. It's now your turn, the only one you'll have, to carry on."

Column | Ascension of the Lord: It's now your turn

Novena for Pentecost: Feast of the Ascension

The Ascension of the Lord: Apostolic times