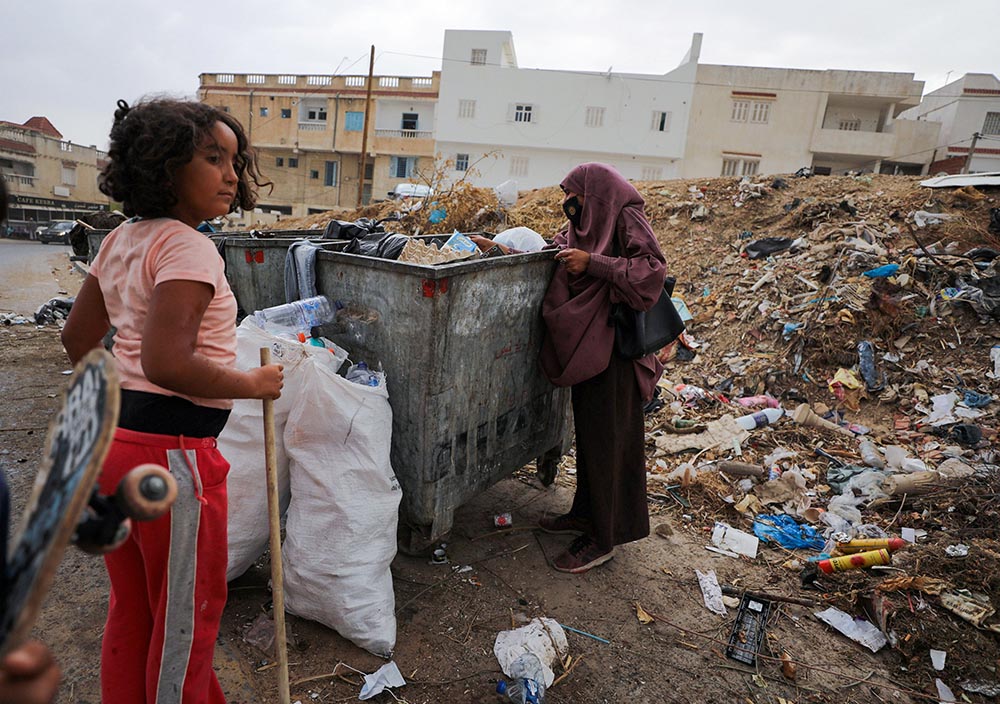 A Tunisian woman and girl look for plastic in a garbage container to earn money in Tunis July 31, 2021. (CNS/Reuters/Ammar Awad)

"Vanity of vanities! All things are vanity!" and "Take care to guard against all greed ... for though one may be rich, one’s life does not consist of possessions."

The phrases from this Sunday’s reading are a prophetic voice addressing the 1% of people who own the world’s wealth. It is no secret that money has power, and power is gained through money. Some of the wealthiest oligarchs reside in the world’s wealthiest empire nation, the United States. These oligarchs, together with the techno feudal lords, are reshaping the global economy and the future of the planet.

In an article by Elizabeth Dwoskin in The Washington Post, she outlines the plans of billionaire investor Peter Thiel, longest-serving board member of Facebook, who stepped down from the social media giant, dissolving one of Silicon Valley's most powerful partnerships. Why? Because he seeks to create a parallel economy fueled by the far-right and their political candidates to whom he has contributed millions of dollars to secure successful campaigns and winning elections, past and present. Beneficiaries include politicians Donald Trump, Josh Hawley, Blake Masters, J.D. Vance and Ted Cruz, among others.

Thiel aims to transform American culture through "anti-woke" business ventures that pressure CEOs to avoid environmental, social and political causes. He does not support socially responsible investing, the reduction of oil production to meet environmental goals, or anything that will hurt "the bottom line." He does favor the controversial cryptocurrency.

Added to this situation is the judicial politics of Knights of Malta member Leonard Leo, former executive vice president of the Federalist Society and board of trustee member of the Catholic University of America. In an article by Coral Davenport at The New York Times, she discusses how Leo's influence, along with powerful donors like the Koch brothers, helped secure the nomination and confirmation of five Supreme Court justices: John Roberts, Samuel Alito Jr., Neil Gorsuch, Brett Kavanaugh and Amy Coney Barrett.

The decision on Roe v. Wade, the decision to severely limit the federal government's authority to reduce carbon dioxide from power plants, and Thiel's successful "investments" attest to the statement that money has power and power is gained through money.

This Sunday's readings are a clarion call to realize that all efforts rooted in self-aggrandizement and enrichment are nothing more than "vanity of vanities," steeped in political and economic greed that has funded people into powerful positions who create and support new forms of ideology and idolatry, often sustained by untruths.

For a country professing "one nation under God" in its Pledge of Allegiance, how far away many of the nation's oligarchs and leaders are from the spirit, the Divine, instead embodying a belief in an imperial, hegemonic deity as portrayed by male biblical writers and now embraced by many Christian and Catholic evangelical fundamentalists.

Paul's letter to the Colossians indicates that he, too, was dealing with many of the same issues facing people of conscience today. Then and now, people continue to struggle with and disrespect diversity, especially within the Roman Catholic institutional church that, at times, cannot accept unreservedly that Christ is all in all.

Racism, sexism and homophobia continue to fuel laws that divide instead of unify. Paul reminds us that "here there is not Greek and Jew, circumcision and uncircumcision, barbarian, Scythian, slave, free," gay, straight, rich, poor, Black, white, Indigenous, male, female, only Christ, only the divine in all. Paul's message to the Colossians is as timely as ever.

For the two-thirds of the globe's population living in poverty, with many impoverished people living in "the land of plenty," today's Gospel offers a word of hope. The Lukan parable highlights the folly of selfishly hoarding wealth that cannot secure life, which, as the reading from Ecclesiastes and the responsorial psalm remind us, is short and whose end humans have no control over. What matters in life is having a generous and open heart, a characteristic that many who are disenfranchised already possess.

Finally, if the Lukan Gospel is read from the perspective of the disenfranchised and from the margins, then this parable presents a stirring challenge to all who profess to being Christian, and especially to those who are Christian-Catholics with Catholic social teaching as part of their tradition. The challenge is to tear down the "barns" of all who greedily amass more and more power and wealth at the expense of the world's most vulnerable, human and nonhuman alike, whose lives and countries' resources and habitats are repeatedly exploited, leaving species and a planet devastated.

The world is in turmoil, experiencing seismic shifts. But as long as people of conscience are breathing, hungering for and committed to transformative justice, hope remains alive, negating the statement that "all is vanity."

A version of this story appeared in the July 22-Aug 4, 2022 print issue under the headline: Are all things vanity?.